In our final technical analysis of all six MotoGP factories we look at KTM, the Austrian brand that made excellent progress in its rookie season 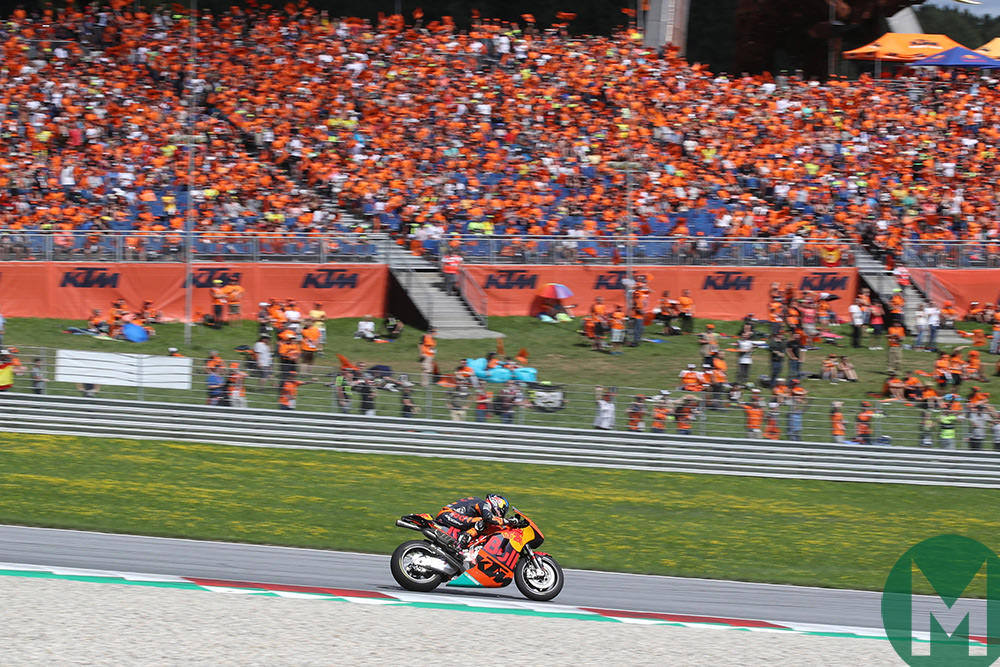 When the 2018 MotoGP grid rides out of the Sepang pit lane on Sunday morning there will be no need to speculate which factory has made the biggest forward strides since last year’s first preseason tests.

It’s rookie MotoGP brand KTM, of course, because it’s much easier to move forward when you’re just starting out than when you’re trying to find that last tenth of a second.

During the first four dry races of 2017, KTM’s deficit to the race winner averaged out at over 40 seconds. During the last four dry races, the gap had shrunk to just over 20 seconds. If KTM can repeat that performance this year it will reduce the gap to 10 seconds. Then, if the company signs a MotoGP winner for 2019, it could fight for race victories.

Those are two big ifs, however. Everyone in MotoGP knows that every tenth gained takes twice as much money and effort as the last tenth, so KTM will find that the mountain gets steeper this season and its rate of climb slows.

Or can KTM make a lie of that pitlane truism? The Austrian brand’s engineers certainly made remarkable progress last year, taking several brave leaps forward where most companies would take a few careful steps.

“KTM’s MotoGP library is nil,” said Pol Espargaró’s crew chief Paul Trevathan halfway through last season. “Everything we do is trying to understand more. Luckily we’ve got a group of guys who aren’t scared to learn.” Or scared to take risks.

Last season KTM took two major risks in its development programme, both of which could have gone badly wrong. The factory’s RC16 started its rookie World Championship campaign with a screamer engine, just months after Honda had switched to a more rider-friendly big-bang configuration. Thus KTM were the only people using a 360-degree screamer. Surely that should’ve been a hint?

“Yes, we already realised that the screamer was no good when we did our first race at Valencia at the end of 2016,” admits KTM race chief Pit Beirer. “But we had only collected our first data from a race and also we had no time, so we decided to keep that engine, work with it to a certain level, then once we reached that level we would make the swap.”

KTM found that the power delivery of the screamer fought the electronics and the electronics fought the chassis, so Beirer decided to make the switch to a 180-degree crankshaft, but not until a full test programme had been completed.

“Our development programme’s aim was that the big-bang must be ready for the Brno race in August, once we had completed tests with the test team and the race team. But, on the test bench, we immediately saw what the new engine could do.

We took the engine to the Le Mans tyre test, where Mika Kallio said it was so much better, so we flew in Pol and Bradley [Smith] for the second day of the tyre test. OK, so then we took the engine in the Espargaró brothers’ private jet to test at Jerez. It was a new engine, with no test hour, so we had to ask our engine guy what will happen. He said, ‘no problem, it’s the same quality level as the other engine’. So we took the risk, went to Jerez, and the guys worked flat-out, so by the Saturday of the Le Mans GP, Pol and Bradley had two engines each.

“We are crazy to do things like that because it can go wrong: you can blow up your engine, but it went very well. If you can make a step, you have to, because every time you make a shortcut, you can build from there. If we had known we had a better engine but didn’t race it for another two months, then we would’ve lost two months. That’s why we take so many risks, risks because they allowed us to prepare much better for 2018.”

KTM introduced one more engine upgrade during the remainder of the season and took its next big risk in September, with its unique tubular-steel frame. During the preceding months Espargaró and Smith had struggled with mid-corner turning, so the frame’s lateral rigidity was progressively reduced.

“We had already raced with six different frame steps during 2017, while our test team had taken many more steps; the total number of chassis we produced was huge,” adds Beirer. “Going into the season, traction was the big thing. Once we found more traction the negative was running wide in the corners. Braking into corners we were strong, but during the turning phase before you can accelerate we went too wide and took too long to get the bike straight so we could accelerate.” 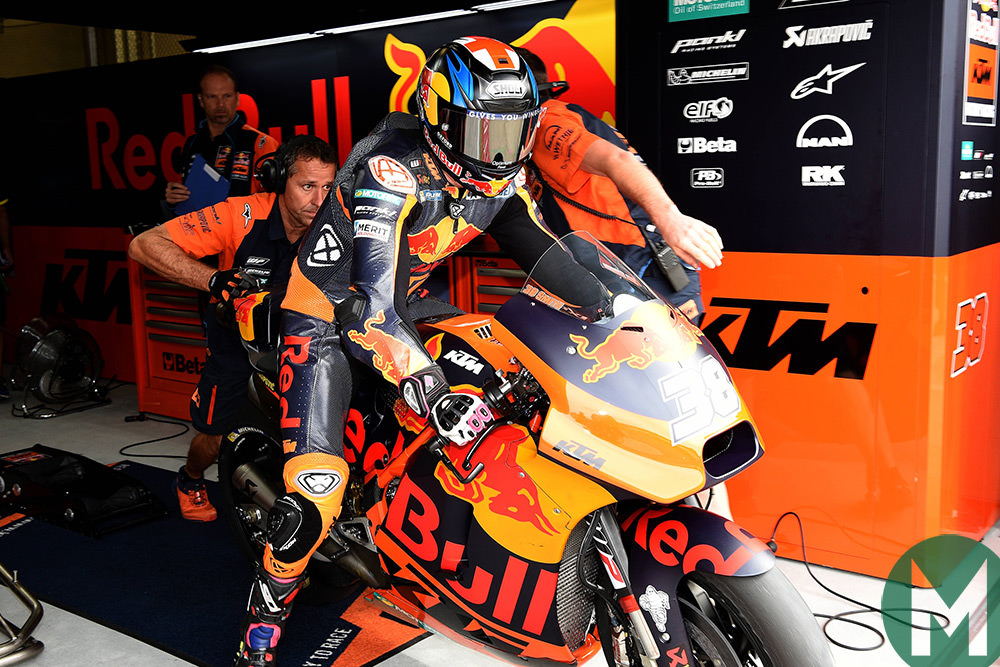 KTM made its handling breakthrough when its race team took a major chassis revision to Aragón, which they planned to test at the track after the race weekend. This is normal procedure in racing – it’s very risky to evaluate a new chassis during practice when there’s not enough time to set up what you’ve already got. But…

“Our people are crazy enough to say, let’s try it on Friday,” says Beirer. “The new chassis was a big step and we had our best race at Aragón, only 14 seconds behind the winner. The chassis improved our weakest point – Pol told me that he would be turning through a corner and he would see Valentino Rossi come through on the inside, pick up his bike and go straight out of the corner, while Pol was still on the side of the tyres, so he could not open the throttle.

“When Pol tried the new chassis for the first time on Friday at Aragón he came back to the box and told us he could turn and pick up the bike – he said he was ready to race with these guys. Aragón was a milestone, because when you make a change that works, then you get completely fresh ideas for the next step.”

KTM engineers are confident that they have an engine and chassis combination that’s on the pace; so their biggest job this year will be working some magic with the electronics – MotoGP’s most complex area of development, despite the switch to control software. Indeed, KTM might never have entered MotoGP if tailormade factory software hadn’t been outlawed.

“We don’t have experts who have raced in MotoGP for 20 years,” explains Beirer. “The rider may say he wants more power out of Turn 7, so we give him more power, but then he destroys the rear tyre. Finding exactly the right balance, that’s where we need to get better, but we just don’t have the experience and that’s maybe the only area we can’t take a shortcut. We have to go to every track and to every corner with our electronics guys and get better through time. You cannot buy that knowledge.”

Beirer is wrong on this particular point. Other factories buy in electronics boffins, but the best brains have already been bought, so KTM tries to grow its electronics knowhow in another way. “We send our best guys to Magneti Marelli a lot, to work with them, trying to build up our knowledge,” he says.

Europe’s biggest bike manufacturer goes racing in an open-minded way – neither obsessed with doing everything its own way or slavishly copying its rivals.

The original RC16 engine was very similar to Honda’s RC213V engine: a 90-degree V4 with screamer firing order and forward-rotating crankshaft; although KTM soon echoed Honda’s switch to a big-bang configuration. And the company has hired experienced engineers from both Honda and Aprilia.

On the other hand, KTM is the only factory to use a tubular-steel frame and WP suspension. Being different can be a big risk in racing, but KTM had little option in these areas because the tubular-steel frame is a company hallmark and WP is owned by KTM.

KTM’s abilities to react quickly and take shortcuts that would worry other companies are the consequence of the company’s streamlined structure: there are few layers of management to work through when the team needs new parts or a revised budget: one phone call to CEO Stefan Pierer is all it usually takes. This is a huge bonus, especially when the race department itself seems prepared to take risks that many others wouldn’t even counter.

Beirer will no doubt have to call on Pierer throughout 2018 as KTM works to close down that gap on Honda, Ducati and Yamaha.

“Every day they go faster, so there’s always a new gap we have to close,” concludes Beirer. “It’s amazing how close we came last year and also how fast they move on again, so you cannot stand still and that’s why development goes on and on and on. We picked up 1.5 seconds a lap last year, but it’s the old story: the last second is the most difficult. Now it’s up to the riders to give some extra once the bike is competitive to get us really close.”

Twenty seconds is still a big gap – how much closer will Espargaró and Smith get at Valencia on November 18?