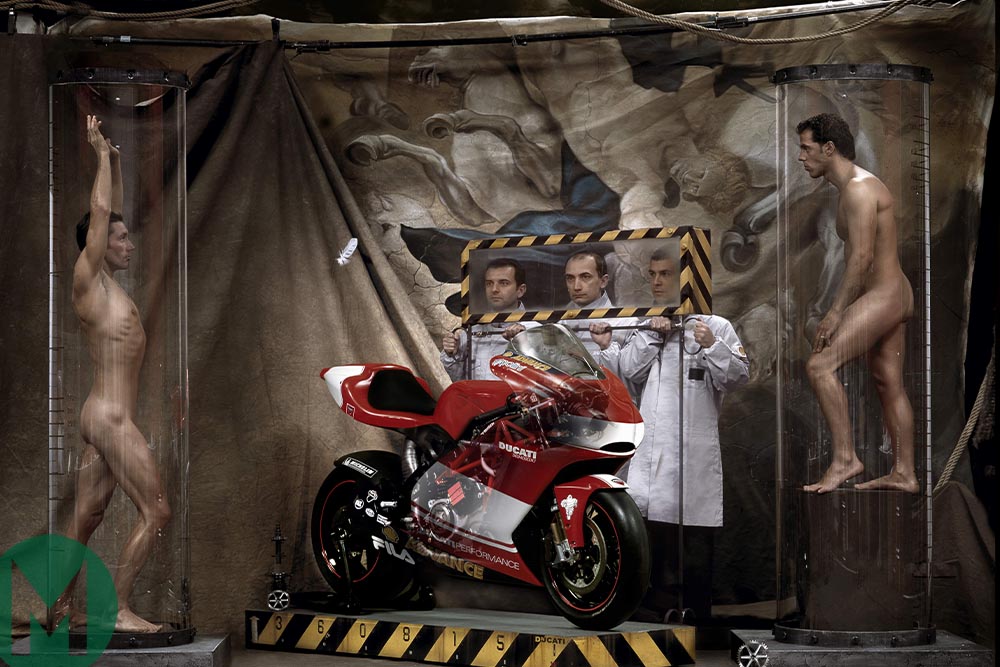 Since this is MotoGP’s back-to-work week, here’s something to cheer up the paddock as it drags its collective backside off the beach and heads for Brno.

What follows is also a reminder of MotoGP’s good old days of bulging sponsorship budgets: those fat summers before the global recession and cigarette-advertising ban.

When teams could use 10 engines a weekend if they damn well felt like it and hire a globally renowned photo artist to shoot their riders in incongruous situations, if only to serve them right for earning several squillion bucks a year.

I once asked Bayliss if he would be happy to take a 50 per cent pay cut if his PR duties were reduced by 50 per cent. “Where do I sign?” he said, quick as a flash

In 2003, Marlboro’s Paris-based PR agency decided the time had come to mix high-performance motorcycles and riders with high art.

The so-called photographer provocateur’s task was to shoot the brand-new Marlboro Ducati MotoGP team in a way no MotoGP team had ever been shot, in a four-part series of set pieces, called Speed Art.

Scene one was Genesis, which starred the first Desmosedici and butt-naked Loris Capirossi and Troy Bayliss. 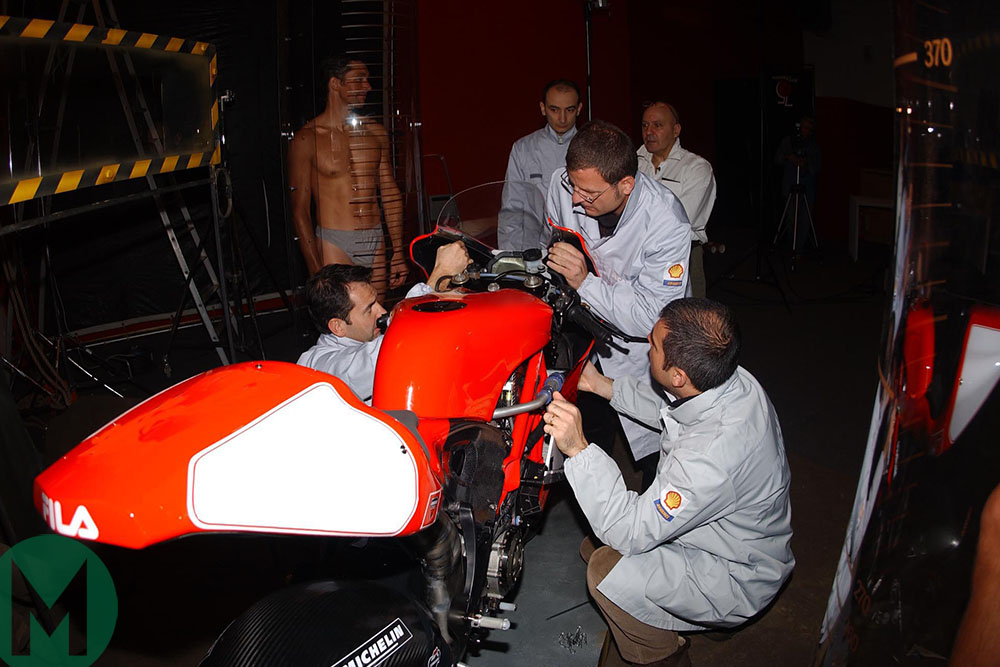 Here is Rancinan (back right), explaining his idea to a slightly bemused Domenicali, while semi-naked Bayliss lurks in a giant test tube, wearing a crazed grin and probably thinking about high-speed rebound damping or how much he needs a beer.

Or to put it another way, according to the words that accompanied Rancinan’s art: “A slightly crazy dream, the dream of all engineers: to create the perfect model. The laboratory is seething with activity.

“Engineers engaged in a quest for perfection, the union of beauty and performance. Little by little the idea is taking shape. Genesis is upon us…” 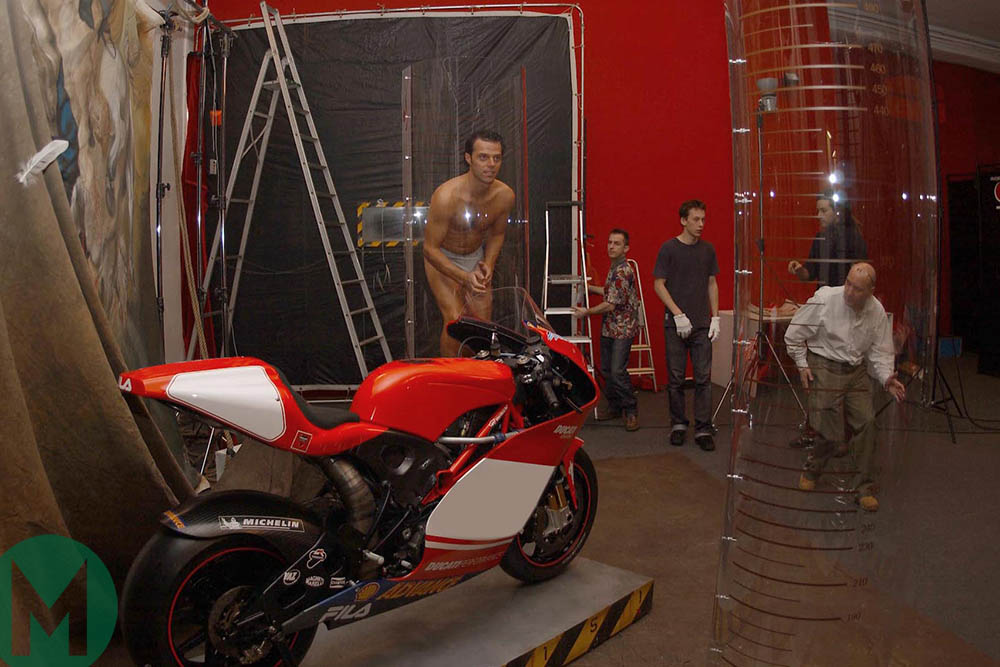 Now it’s Capirossi’s turn to strip off and enter a test tube, while Rancinan teaches the Italian how to strike a pose.

Or as the blurb has it: “When Capirossi awakes, his eyes heavy with sleep, he says, ‘I am here to bring the knowledge I have accumulated in my many years as a rider.

‘It’s something of a renaissance for me. I’m Italian and for me there’s no greater dream than of riding for such a prestigious Italian team’.”

The GP03 is set on a plinth, in front of a canvas that has Helios The Sun King riding a chariot through time, from the Renaissance to the 21st century. The chariot is pulled by four horses and Helios is turned upside down, presumably having a highside. 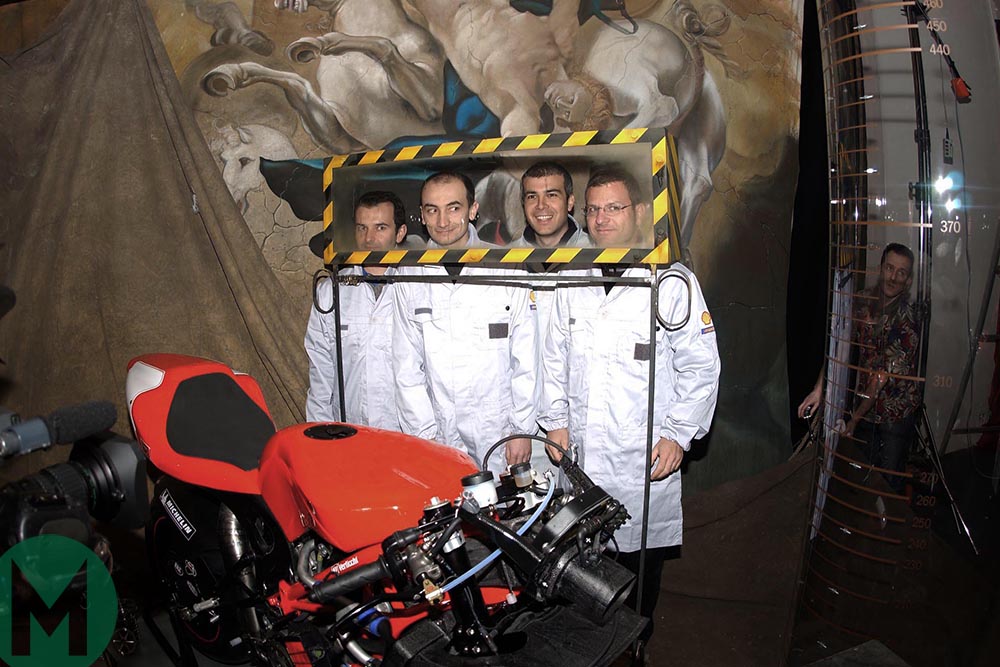 Ducati Corse’s finest engineers are the men in white coats. “With their tight-fitting collars and stern aspect they have come to look at their creatures. Their expressions are stern, severe.” Okay, so Domenicali and his henchmen are smiling in this shot because it’s only a prep shot.

“There at the centre is the ‘brain’, Claudio Domenicali… Behind the glass, the creators look on as their prototypes undergo oxidisation. They become witnesses of the materialisation of colours.

“The bike assumes its red and white livery. Soon it will be the turn of the two creatures to be transformed…”

In fact, Capirossi and Bayliss had already been transformed. Rancinan’s Genesis shoot took place in April 2003, just days after the season-opening Japanese Grand Prix at Suzuka, where the first Desmosedici had stunned the Japanese factories in its debut race.

Capirossi actually led the first four laps and finished third behind the Honda RC211Vs of Valentino Rossi and Max Biaggi.

A podium result first time out after three decades away from Grand Prix racing was something else, especially since the top Yamahas and Suzukis were way behind.

The result was Ducati’s second premier-class podium, 31 years after Bruno Spaggiari had finished the 1972 Italian GP at Imola in third place, a whole lap behind Giacomo Agostini’s MV Agusta.

Spaggiari rode a desmodromic v-twin 500, an early version of the twins that later dominated World Superbike.

Bayliss finished fifth at Suzuka, his MotoGP debut, another stunning result from the Aussie who had spent the previous three seasons contesting World Superbikes, which ran two races on race-day.

After the race he quipped, “What time’s the second race? I’ve thought of a few things I want to do to the bike.” 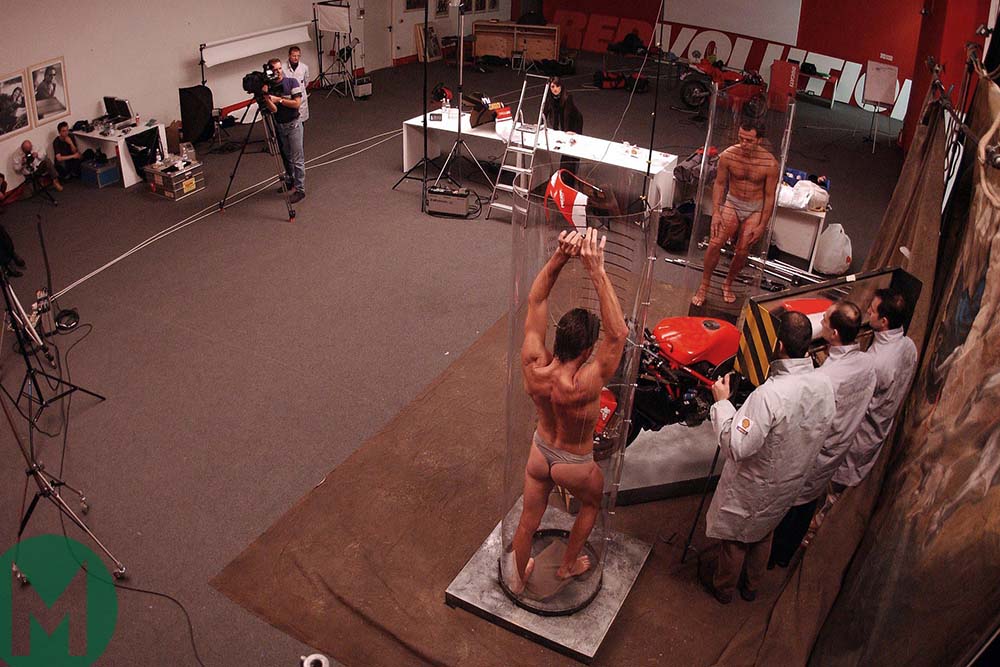 After all the preparation it’s time for the shoot. Bayliss, Capirossi, Domenicali, Cecchinelli and Gasbarro (Bonazzi has been dropped due to lack of space) assume their poses with the GP03. (Hey, Troy! Nice butt!)

After the shoot, the riders, bike and engineers headed south for round two of the 2003 MotoGP championship at Welkom, South Africa. This time it was the turn of Bayliss to show Honda and everyone else the way.

The rookie led the first ten laps, chased by Sete Gibernau, Rossi and Biaggi. In the end, Honda’s V5 trio monopolised the podium, while Bayliss finished a very solid fourth. Capirossi retired with an oil leak.

Less than two months later Capirossi won Ducati’s first-ever premier-class race when he took victory at the Catalan GP, ahead of Rossi and Gibernau. Bayliss had scored his first podium a few weeks earlier at Jerez.

At that time I wrote press stuff for Marlboro Ducati. Capirossi and Bayliss were two of the best riders I worked with in that capacity. Few, especially back then when MotoGP was less media-friendly, enjoyed doing press work.

I once asked Bayliss if he would be happy to take a 50 per cent pay cut if his PR duties were reduced by 50 per cent. “Where do I sign?” he said, quick as a flash.

Bayliss was probably the easiest of them all to deal with, because he had done several years in everyday jobs before he became a pro racer; an unusual career path in the modern era when most pros have never had a proper job. He couldn’t be a prima donna if he tried.

At Rio de Janeiro in 2004, Bayliss crashed out of the race. I knew he’d be angry and wouldn’t hang around long – he’d get back to his freight-crate changing room, change into his civvies, jump into his hire car and head back to the hotel.

So I legged it from the media centre to his freight-crate, knocked on the door and peered inside.

Bayliss was sitting down, half out of his ruined leathers. He looked up, grinned and said, “f*** off and make it up!”.

* When we get time we will look into Rancinan’s subsequent creations with Ducati, Bayliss and Capirossi: Breakaway, Tomorrow 3053 and the Annunciation. They keep getting better…