Joe Roberts may have missed the Moto2 podium in Qatar, but the MotoGP paddock’s latest American star – no relation to three-times 500cc world champion ‘King’ Kenny Roberts – started the race from pole position and finished just 0.131sec outside the top three.

There are two reasons behind Roberts’ dramatic turnaround, from a best qualifying performance of 21st quickest last year and a career-best finish of tenth, in his GP debut at a rainy Brno in 2017.

First, machinery. Roberts started his full-time GP career in 2018 aboard the brand-new NTS and last year switched to KTM, when the Austrian factory got its Moto2 chassis all wrong.

This season Roberts is on a Kalex – the German chassis maker that’s won the last seven Moto2 riders and constructors’ titles – and the bike does everything he wants: turns into corners well and finishes corners well. 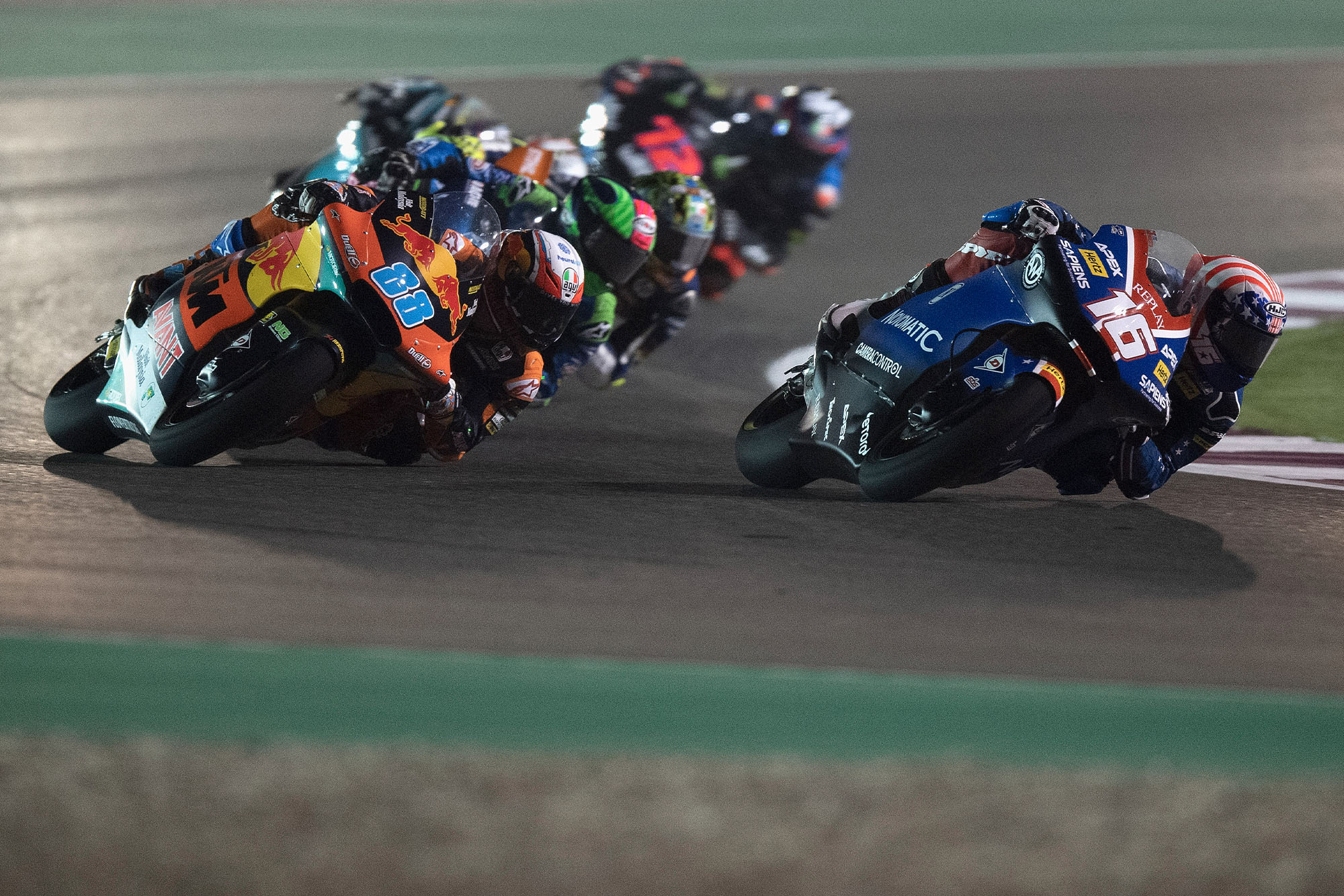 Roberts heads up the field during the Moto2 race

MotoGP and coronavirus: where to from here?

Many people in the paddock and most fans around the world are asking when will the 2020 MotoGP world season really start. Will the team freight currently languishing in Qatar…

Second, confidence. Two tough seasons, during which he scored just five points from 37 races, played havoc with his self-belief. Riding a better bike has helped restore some of his confidence, but former factory MotoGP rider John Hopkins has also done his bit as the American Racing team’s rider coach.

“I guess it’s that thing when you speak to people who’ve been in combat – the only person they can really relate to is someone else who’s been in combat,” explained Roberts’ father in Qatar.

“Other people just don’t get it, but Joe’s been able to talk to John about his feelings and about what he’s going through, and John knows exactly what he’s talking about.”

Hopkins has no doubt that Roberts has what it takes. “The second I saw Joe out on track I knew immediately there was no shortage of talent,” said the former factory Kawasaki and Suzuki MotoGP rider.

“The only thing that’s been holding him back is self-belief and confidence. Confidence is everything in racing and confidence breeds confidence, so it’s all come together in a great way.”

If he had gone with the softer compound, perhaps he would’ve made the podium party

Roberts was born in the USA in 1997, but conceived in the UK by British parents Matthew and Anna. Matthew is a visual-effects engineer, hence the move to Los Angeles. Dad has always been into bikes and started racing a Suzuki GSX-R750 in Californian club events, until workload forced him to quit racing. That’s when he bought a dirt bike to ride in the desert, then he bought another four, so his four sons could ride with him.

Matthew decided that racing was the way forward for the kids when he saw the seminal 1971 documentary On Any Sunday, starring actor/racer Steve McQueen and pro-racers like Dave Aldana and Mert Lawwill.

“I saw the movie and right away it was, like – flat track, fantastic – we’ve got to try that!” said Matthew.

“We found this ranch about an hour away, owned by a guy called Ken Maley, who used to make steel shoes for everyone – the Hayden brothers and other top guys. That’s where Joe started, aged five or six.” 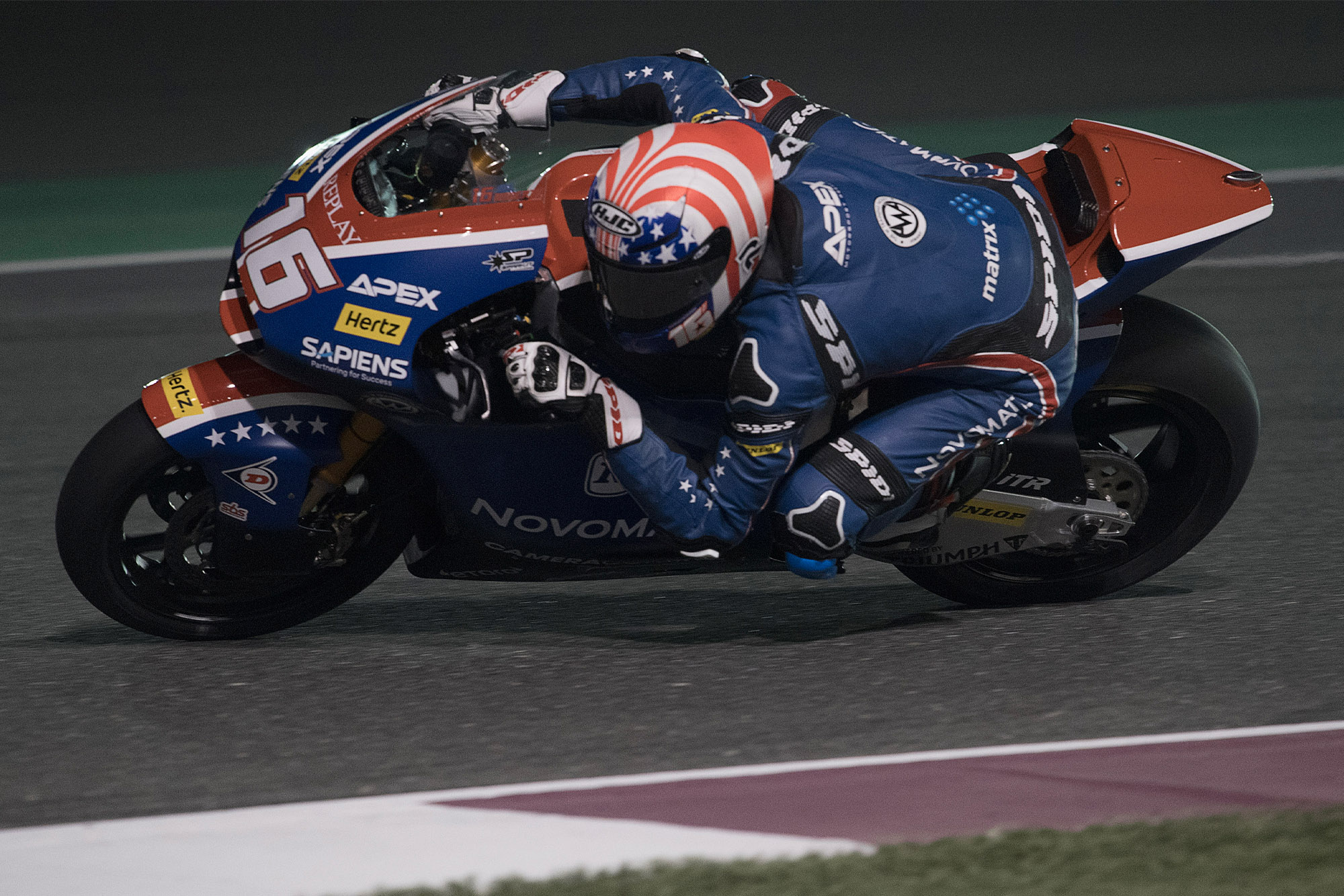 Roberts was fast in the Rookies but he was unable to find a Moto3 world championship ride, so during 2013 he returned to the USA to race a middleweight for the first time. The move went well: he won his first five US Supersport races, riding a CBR600 for Team Hammer, run by racer/journalist John Ulrich.

Roberts returned to Europe in 2017, contesting the Spanish CEV Moto2 series, then got his first full-time GP ride in 2018, aboard the Japanese-built NTS.

On Sunday in Qatar he battled for the lead for much of the race with Sky VR46 rider Luca Marini, then with Tetsuta Nagashima, Lorenzo Baldassarri and Enea Bastianini. He was the only front-runner to choose Dunlop’s harder compound front.

If he had gone with the softer compound, perhaps he would’ve made the podium party, but he was anything but disappointed with his weekend.

“I’m happy, but also, I’m like, man, so close!” he said. “Honestly I can’t be upset, it’s the best result I’ve ever had. We ended up going with the harder front tyre to try and conserve it, because last night in qualifying the softer front started tearing up a bit.

“I pushed so hard on that last lap to try and get the podium, but I kept losing the front in the left-hand corners because there’s not so many lefts here, so the hard tyre kept getting cold.

“It was interesting being up the front and seeing the dynamic. I think I was quite strong from the beginning to the middle; it was easy to be there. The bit I struggled with was the last five laps.

“When Baldassarri and the other guys came by they had a little bit more of something, and I didn’t want to risk throwing away such a great result because of feeling I had from the front.”

First-time winner Nagashima dedicated his victory to his late friend Shoya Tomizawa, winner of the first race of the inaugural Moto2 season, at Losail in April 2010. The 27-year-old father of three is starting his fifth season in Moto2 with his seventh team. His previous best results were close-run fifth-place finishes at last year’s Dutch TT and British GP. He is the fourth Japanese rider to win a Moto2 race, after Tomizawa, Yuki Takahashi and Takaaki Nakagami. 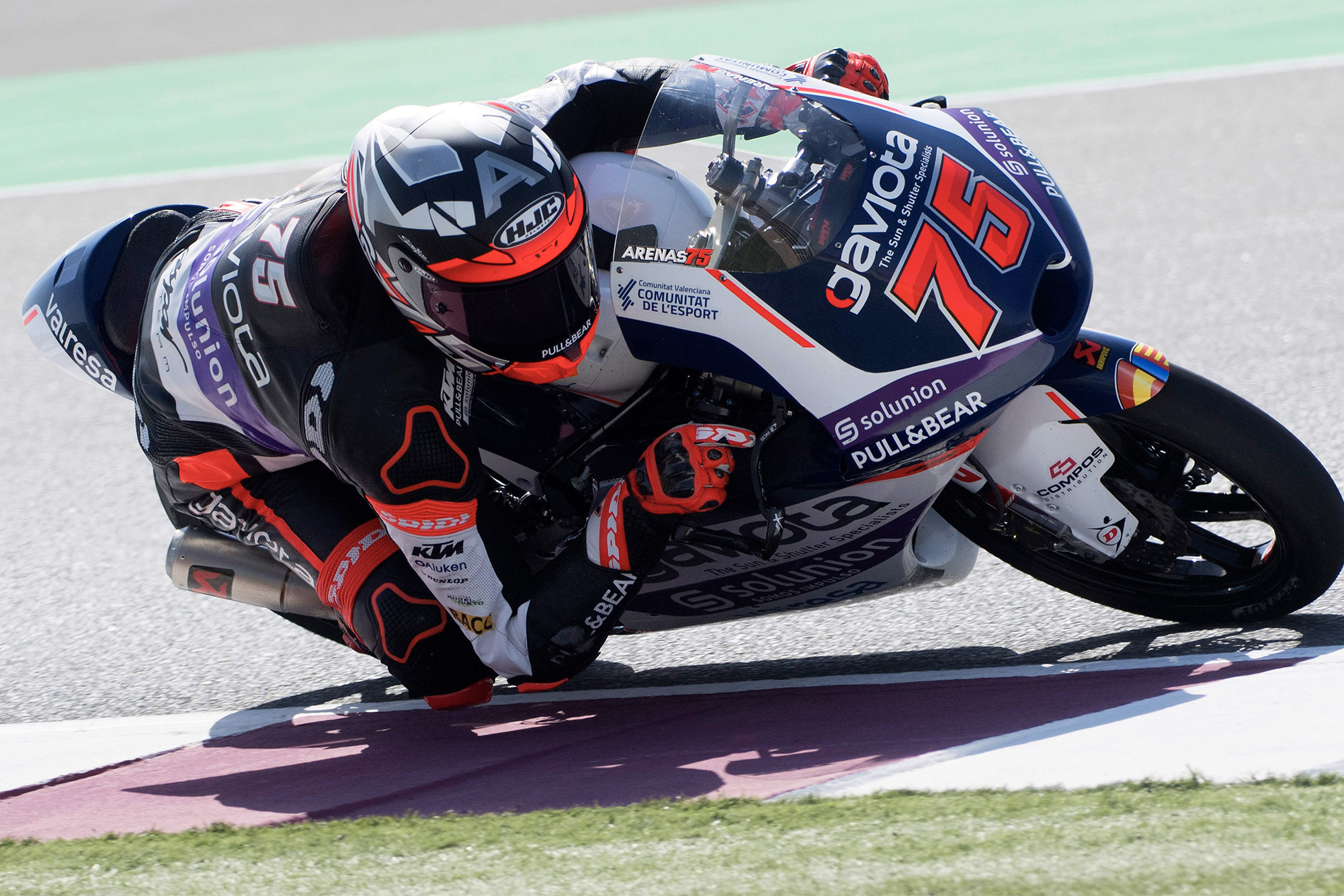 KTM was beaten by Honda in the last three Moto3 riders’ and constructors’ world championships, so the Austrian factory has made big changes to its RC4 for 2020.

The chassis has been heavily revised – with a different frame, geometry and riding position – to improve turning, so riders can enter corners faster. Engine internals have also been tweaked – using knowhow from KTM’s RC16 MotoGP engine, which shares the same bore and stroke – to improve corner-exit acceleration. A new air intake and bigger airbox are important parts of a useful increase in power and torque.

“The bike has changed a lot compared to last season,” said Gino Borsoi, sporting director of the Aspar team which runs Qatar winner Albert Arenas and Stefano Nepa on RC4s. “The turning, especially into slower corners, has improved, without losing stability in fast corners.

“Last year our biggest disadvantage against the Hondas was on the straights. This year’s engine gives better corner exits – in the 20 to 60 per cent throttle opening area – so we have closed the gap. Mid-range is so important, because now that we have enough bottom power to get us out of the corners, we can run a longer gearbox for more top speed.”

Honda’s NSF2020RW has undergone minimal changes for 2020, except for the gearbox, which reverts to the 2018 design. And although KTM won the opening race of the 2020 Moto3 season, NSF250RW machines filled the next eight finishing positions, all of them crossing the finish line less than a second behind Arenas, with runner-up John McPhee failing by 0.053sec to draft past the Spaniard on the run to the finish line.

Moto3 engine regulations are unchanged for 2020. Riders get six engines, two gearboxes and two throttle bodies for the 20-race season, which they rent from the manufacturers for a maximum of £52,000.

The manufacturers usually deliver engines to riders in several batches during the year. Engines are allocated randomly by IRTA, so the factories cannot decide who gets which engine. When each new batch arrives, IRTA randomly selects one sample engine, which is stripped and compared to the first-batch sample, to ensure that all parts remain unchanged. If no differences are found, the new batch is accepted, the engines sealed and then randomly allocated.

Shapeshifters banned from Moto2 and Moto3

Shapeshifter onboard geometry adjusters – as used on Ducati’s Desmosedici MotoGP bike and soon to feature on Aprilia’s RS-GP – have been banned from the Moto2 and Moto3 classes.

Ducati started using its latest go-faster gadget at the end of last season. The shapeshifter mechanically compresses the rear shock – via a switch on the left handlebar – to drop the rear of the bike, which reduces wheelies on the exits of corners and also improves aerodynamics to increase top speed. Although Moto2 bikes, and especially Moto3 machines, don’t really need anti-wheelie, the aerodynamic benefits of a shapeshifter would be an important advantage.

But MotoGP technical director Danny Aldridge has moved quickly to keep this technology out of the smaller classes, just as he did when aerodynamics was the big new thing in MotoGP.

“We don’t want this technology in Moto2 or Moto3,” said Aldridge in Qatar. “If anyone comes to us with anything like that it will be a straight ‘no’ from us. It’s a cost thing – we are always trying to make Moto2 and Moto3 more sustainable from a cost point of view.”