Perhaps one day Valentino Rossi will work out how to sit back and rest on his laurels. But he’s not there yet.

Eleven weeks before his 4oth birthday and two days after MotoGP’s longest-ever season of racing and testing, he was back at it: racing motorcycles around in circles (and hurting himself), because that’s what he likes doing.

Sunday was the biggest day of the year at the VR46 Motor Ranch, the training venue that Rossi created in 2011 just outside Tavullia – the hilltop town where he grew up.

Rossi and his gang train here most days, mastering the art of throttle control and machine control around a 2.5km dirt course that includes 13 corners: lefts, rights, uphill, downhill, all graded and manicured to provide just the right amount of grip: not too much and not too little. It’s an epic facility that dwarfs many commercial tracks.

The 100-kilometre race has been the main event at the ranch since 2014. In theory, it’s a bit of postseason fun with his friends and his young apprentices from the VR46 Riders Academy, but the reality is somewhat different.

There are no world championship points up for grabs, no prize money, no bonus money, no grandstands crammed with adoring fans, but you’d never know it. The battle for the lead – Rossi and co-rider Franco Morbidelli versus Mattia Pasini and team-mate Lorenzo Baldassarri – was fast and furious throughout most of the hour and 50 minutes. As rough and as tough as anything you see in MotoGP.

“The prize is pride, just pride!” grinned Morbidelli, who took the win with Rossi by just 1.5 seconds. “Now for one year we can tell the others, we beat you!”

Morbidelli had the biggest fight of them all with Baldassarri, as they contested the lead in the latter stages of the race, during which riders did stints of around 15 minutes. The pair cut each other up continuously and collided on several occasions. Moto2 race winner Baldassarri was none too pleased with the tactics of the 2018 MotoGP rookie of the year, but Morbidelli didn’t seem bothered.

“We have very, very hard fights here – more intense than in the GPs because here there’s no Race Direction!” he laughed.

Rossi admitted that it isn’t always easy to keep aggrieved riders from boiling over in the changing rooms.

“Sometimes it’s difficult after a race, difficult to manage between the riders,” he said. “One guy says to the other: don’t do that again… I’ll f**king get you next time, things like this. But we always try to be piano, piano [softly, softly]. It’s not easy to find the right balance, but this aggression is also good for training and improving.”

The 100km lead swayed this way and that, sometimes changing several times a lap and sometimes in the pits, when each team swapped rider and bike, with mechanics switching transponders from one bike to the other as quickly as possible. 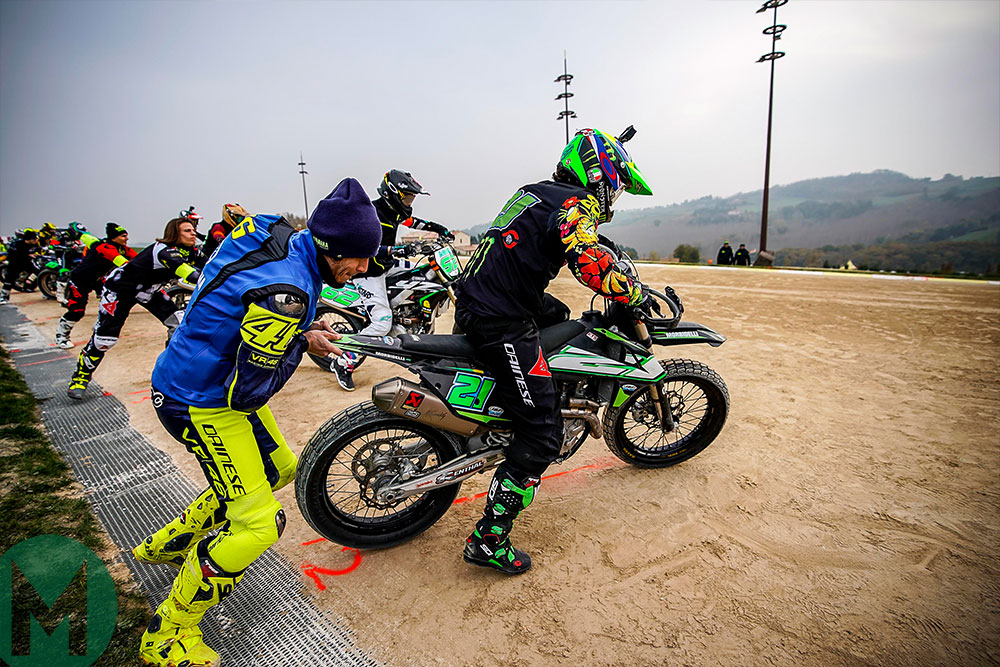 In the closing stages Rossi had taken the lead from Pasini, but when they came into the pits his crew was a split second too slow swapping their transponder, so Baldassarri raced out just ahead of Morbidelli.

Finally, Rossi and Morbidelli seemed to have lost the battle when Rossi clouted a trackside marker pole with his right foot during his penultimate stint. After he handed over to his team-mate he was limping heavily and the doctor was called.

“I was right behind Paso; very, very close to him because I wanted to attack,” he said. “In a fast right I closed my line too much and I hit the post with my foot. F**k, I felt a lot of pain. We checked it with the doctor and I said we won’t stop because, on the bike, it wasn’t a problem. I hope it’s okay – we will check it in the next few days.” 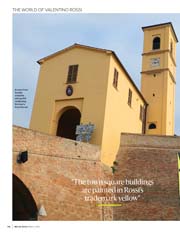 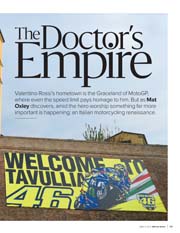 During their final stint, Pasini opened a six-second advantage over Rossi, but then disaster.

“F**k, I don’t know what happened!” said Pasini, another Moto2 winner who won the 2017 100km. “In two or three years I’ve never crashed at that corner – it’s called the Graziano Rossi corner, so maybe there was some witchcraft! I felt very calm, maybe too calm, because we had a six-second lead.

Rossi could hardly believe it when Pasini skidded off, quickly remounting right behind the new leader. Pasini closed the gap in the last couple of laps, but didn’t quite make it.

“It’s a great victory because it looked like we had lost the race,” beamed Rossi. “It’s a great emotion and it’s important because Franco and I didn’t win a race this year, so this one victory changes the season! We enjoyed it a lot, a lot. It was good. It was a very difficult race because the track changed a lot – the grip went up after a bit and then went down with the evening humidity, so you had to control things very much. I enjoyed myself a lot.

“It’s a lot more fun than MotoGP. The difficult thing at MotoGP is that there are a lot of other things around that are boring. Here it’s just fun – it’s just the taste of riding a motorcycle. The problem with MotoGP is everything else: the travel, the flights, the paddock, the autographs, the photos, the PR, the journalists, the interviews. Only at the end do you get to ride the bike!” 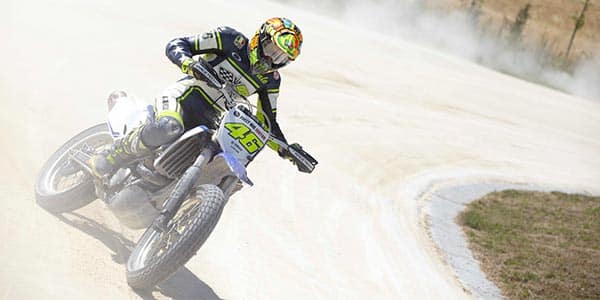 Valentino Rossi's broken leg means he has lost his championship chance – was he right or wrong to be thrashing around on a dirt bike midseason? Well, that’s torn it. Probably…

The race finishes at dusk, with floodlights illuminating only half of the track. As the chequered flag goes out the DJ is still banging out the tunes: The Who, Led Zeppelin and Wagner; then Queen’s ‘We are the Champions’ blasts out as a hobbling Rossi struggles to make it to the top of the podium, where he is adorned with a laurel of sausages and awarded a leg of ham, the traditional 100km winner’s prize.

The racing may be very serious but the event itself couldn’t be more unpretentious and good-natured. Every year Rossi and his crew aim to grow the 100km a bit more. They want to invite riders like Troy Bayliss, but Rossi admits they don’t have the time to organise everything. Next year the event may be open to the public, with profits going to charity.

What next for Rossi? Another race, of course. Next weekend he switches to four wheels at the Monza Rally Show, where he will seek to extend his record to six victories.

Just like arch-rival Marc Márquez, MotoGP’s veteran has no off switch. And long may it continue.