There were two things that got MotoGP commentators and fans particularly excited last season: the unpredictability of the racing and the incredibly close lap times, with the fastest 15 riders often separated by less than a second.

But was the racing really any more unpredictable than it’s been in recent years?

MotoGP 2020 certainly seemed unusually unpredictable because none of the title challengers managed to score consistent results over the 14 rounds. Even world champion Joan Mir stood on the podium at only half the races, while 2020 runner-up Franco Morbidelli only made the top three at five races.

Various theories were offered to explain the situation. Mostly, the Covid-affected calendar, which had races staged in hotter or colder conditions than usual, playing havoc with tyre choice. Or Michelin’s new rear slick, which took many riders and teams a while to get their heads around. Certainly these factors did play a part.

And yet, looking back after the completion of the season, we can see that there was nothing that unusual about the consistency of most of the top riders.

Mir’s 2020 podium hit rate of seven top-threes from 14 races was the same hit rate as Andrea Dovizioso’s in 2019 and 2018, when he finished championship runner-up to Marc Márquez, with nine podiums from 19 races in 2019 and nine from 18 in 2018. And the riders who finished just behind Mir last season had similar podium hit rates as the riders who finished behind Dovizioso in previous seasons.

So the unpredictability of MotoGP was a mirage because the riders and their results were no more inconsistent than usual. With one exception – the only thing that made the racing seem less predictable was the absence of Marc Márquez. 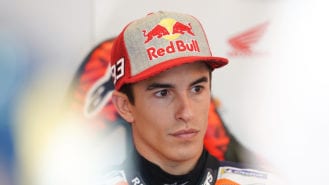 I think Márquez’s 2019 campaign is probably the greatest of all time. To achieve that kind of speed and consistency – 12 victories and six second places for a podium hit rate of 94 per cent – at a time when the bikes are so close and the top riders so talented is breathtaking. Especially now we’ve just seen the 2020 championship won with a 50 per cent podium hit rate.

Of course, there is a reason for the inconsistency of Mir, Dovizioso and the rest. MotoGP’s Michelin spec tyres have a narrow operating window, so it’s not easy for the riders and their bikes to get inside that window at every race, according to different circuit layouts, track temperature and so on.

Therefore if you want to thank anyone for the thrilling unpredictability of MotoGP 2020 you need to thank Márquez and Michelin.

“Sometimes you hit the jackpot with the tyres, other times you lose the shirt off your back,” a factory engineer told me a while back. “It’s a gamble – that’s why it changes every week.”

Just a few degrees of track temperature can make a huge difference – from being in the podium fight to struggling to stay inside the top ten.

At Barcelona in September, KTM rider Pol Espargaró was second fastest in FP4, 0.03sec off the fastest time. In the race he was half a second off the fastest riders and eventually crashed out of eighth place.

“On Saturday and in the race we used the medium front,” says Espargaro. “On Saturday it was sunny, then on Sunday it was cloudy and we were in trouble. When you have that small window then small changes can completely change your race.

“When the tyres aren’t working with your bike you can’t get the best out of the tyres, but this does make the championship more open, which is nice for the fans.”

Most riders and teams don’t complain about the narrow performance window of the Michelins. “It can be a bit crazy, but it’s the same for everybody,” says Wilco Zeelenberg, team manager at Petronas Yamaha. 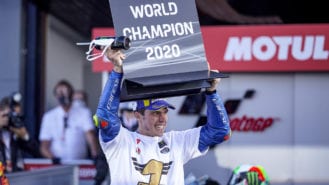 How does Joan Mir’s MotoGP title rate against the previous 71?

Only two riders in MotoGP history have won championships by winning every race for a 100 per cent points score. This year’s champion Joan Mir scored less than 50 per cent of the available points…

Yes, the same for everybody. With one exception.

The reason Márquez is so unerringly consistent while all around are slipping and sliding is that he doesn’t mind when his bike is outside the Michelin window, because he’ll still be on it, hanging it out, front and rear, like a high-wire walker strolling between the 20th floors of two skyscrapers. While most rides get defenestrated when their tyres aren’t quite right, Marquez happily re-fenestrates, at every other corner, if needs be.

Next we come to the conundrum of crazy close lap times in MotoGP. Let’s take a couple of examples to illustrate the situation.

FP3 at September’s Catalan grand prix ended with the fastest 19 riders separated by 0.865sec. That same morning the quickest 19 Moto3 riders were covered by 0.883 seconds!

That’s not normal. It’s no surprise to have the top riders in a 60-horsepower class separated by eight tenths, because lots of riders can take those bikes to the limit, but in a 290-horsepower category?!

October’s Aragon GP ended with the first 15 riders taking the chequered flag separated by 15.291 seconds, the second-closest top 15 of all time. September’s San Marino GP had the third closest top 15, with the Austrian, Czech and Catalan rounds all inside that historic top ten.

How is it even possible that 19 different riders aboard six different brands of MotoGP missile all circulate a track at pretty much the exact same speed?

If you want to thank someone for making MotoGP so close and exciting you need to thank Dorna for tweaking the technical rules over the last decade to tighten up the grid.

But if you want to thank someone for making it ridiculously close – a few hundredths of a second per corner close – you need to thank Michelin, specifically the company’s front slick.

The tyre’s limit is not as out there as the Bridgestone front slick (MotoGP’s spec tyres from 2009 to 2015), which means that pretty much the entire grid can ride to the absolute limit of the tyre, especially in practice and qualifying. 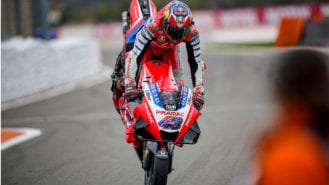 Front-tyre performance conditions lap times more than any other technical factor, because it determines a rider’s corner-entry speed and mid-corner speed. So if everyone can ride the front tyre to its limit then their lap times will be basically the same.

“Yes, the front Michelin is the limitation,” one factory’s chief engineer told me.

“There’s a clear limitation with the front tyre, but we can’t change that,” said another team boss. “The Bridgestone front was a real good front, a different limit, but then you struggle with other things.”

Once again, there’s an exception to all this. Yes, you guessed it: Márquez. The six-time MotoGP champion’s ability to over-ride Michelin’s front slick – tyre squirming across the asphalt, handlebars jack-knifing into the corner – is what allows him to find a few thousandths over his rivals.

Riders may not complain about the crazy-close lap times and the difficulty to find the Michelin window, but sometimes these issues do drive them mad, like when someone misses Q2 by two-thousandths of a second or loses two tenths a lap on Sunday because the track temperature has changed.

Next season Michelin’s tyres will be the same, so the lap times will be just as close and the racing just as difficult to predict. A new front slick, with better corner-entry performance, is already under development for 2022. It will be interesting to see what effect that has on the racing.