Gigi ‘Gadget’ Dall’Igna is up to his tricks again. Ducati’s chief engineer – the man who gave MotoGP wings, holeshot devices, wheel fairings, ‘swinglets’ and much more about which we’ll never know – has come up with a gadget that allows his riders to unleash the Desmosedici’s mighty engine harder than ever.

Adjustable geometry has been one of bike racing’s greatest holy grails for decades. Geometry – like pretty much everything else on a race bike – has to be a compromise, because it’s impossible to design a motorcycle that works at its best in all three zones: braking, cornering and accelerating.

Dall’Igna’s latest gadget is the logical next step from his holeshot device and does a similar job, by changing the motorcycle’s geometry and centre of gravity during the corner-exit phase.

Once again it’s technology borrowed from another form of racing: aero came from Formula 1, the holeshot device from motocross and the geometry adjuster from mountain-biking.

Ducati’s ingenuity and keenness to read MotoGP’s rulebook so aggressively is impressive, but will there be protests?

Pramac rider Jack Miller, who debuted the holeshot device at the end of 2018, started using Ducati’s shapeshifter (we may as well go with the cool name) at last October’s Thailand GP. This year all four GP20 riders – Miller, Andrea Dovizioso, Danilo Petrucci and Pecco Bagnaia – have the device at their disposal.

During last weekend’s Losail tests, Miller confirmed that the shapeshifter does what the holeshot device does: lowers the entire motorcycle to reduce wheelies and therefore improve acceleration. 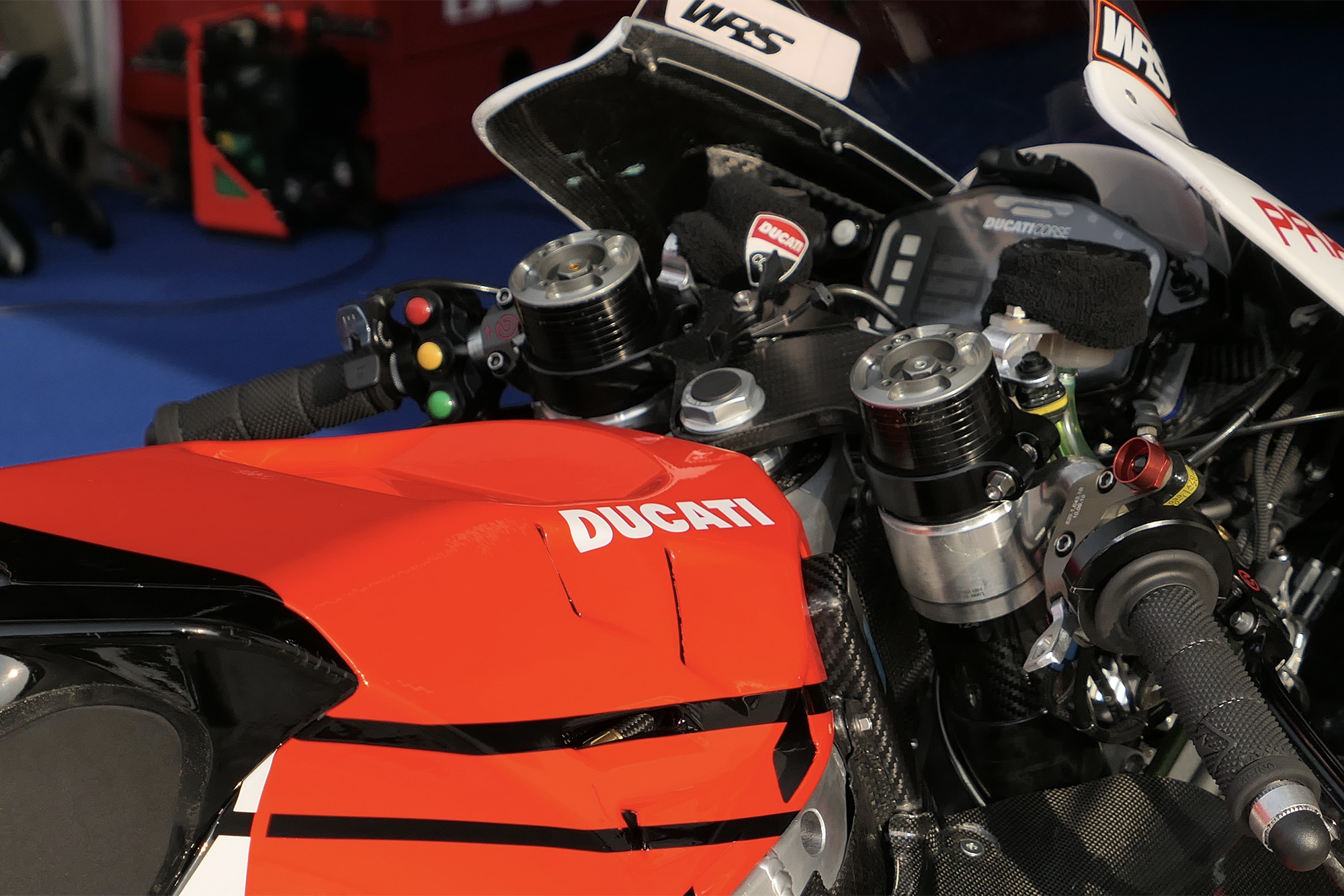 Miller’s GP20 at the Sepang tests: the shapeshifter switch is on the far left

But, hang on… how come Ducati is using a squatting device when for many years MotoGP engineers have been perfecting the anti-squat concept to improve corner-exit performance? Surely there’s a huge contradiction between squat and anti-squat?

Not at all, because they work in sequence: anti-squat, for more traction, then squat, for less wheelie.

Anti-squat uses chain force to extend the rear suspension during acceleration, which forces the rear tyre into the asphalt, increasing traction.

The rider therefore engages the shapeshifter later, once he is almost out of the corner, as he enters the wheelie phase.

Yamaha tops first MotoGP preseason tests, but does it matter?

The first skirmish of MotoGP’s 2020 phoney war is over. Yamaha came out on top, with Fabio Quartararo fastest on each of the three days of the opening pre-season tests…

The shapeshifter essentially does the same job as wings. It reduces wheelies physically, so that the (now very basic) anti-wheelie program doesn’t need to cut in, because when it does it closes the throttle butterflies to reduce torque delivery to the rear wheel, which hurts acceleration.

Electronically assisted MotoGP suspension and ride-height adjusters were banned in 2010, so the shapeshifter is cable and hydraulically operated via an auxiliary hydraulic unit working in parallel with the shock. When the rider flicks the switch the auxiliary device compresses the shock.

The shapeshifter may also have another application (about which Ducati must’ve forgotten to tell us) which might be even more important than the factory’s claimed use for the contraption.

Moving aerodynamic devices – which increase downforce through the corners and reduce downforce on the straights – are banned from MotoGP. But there’s no rule that prohibits adjusting the attitude of the entire motorcycle to lower the bike by a few millimetres and change the aero angle by a few degrees to increase top speed. Might this account for Ducati’s impressive top-speed increase, from 351.6kph/218.4mph at last year’s Qatar GP to 355.2kph/220.6mph during the tests?

Ducati’s ingenuity and keenness to read MotoGP’s rulebook so aggressively is impressive, but will there be protests if rival manufacturers decide that aero adjustment is indeed a motive behind the device?

The Ducati shapeshifter may be new, but engineers have been wrestling with the compromises inherent in conventional motorcycle chassis for decades. 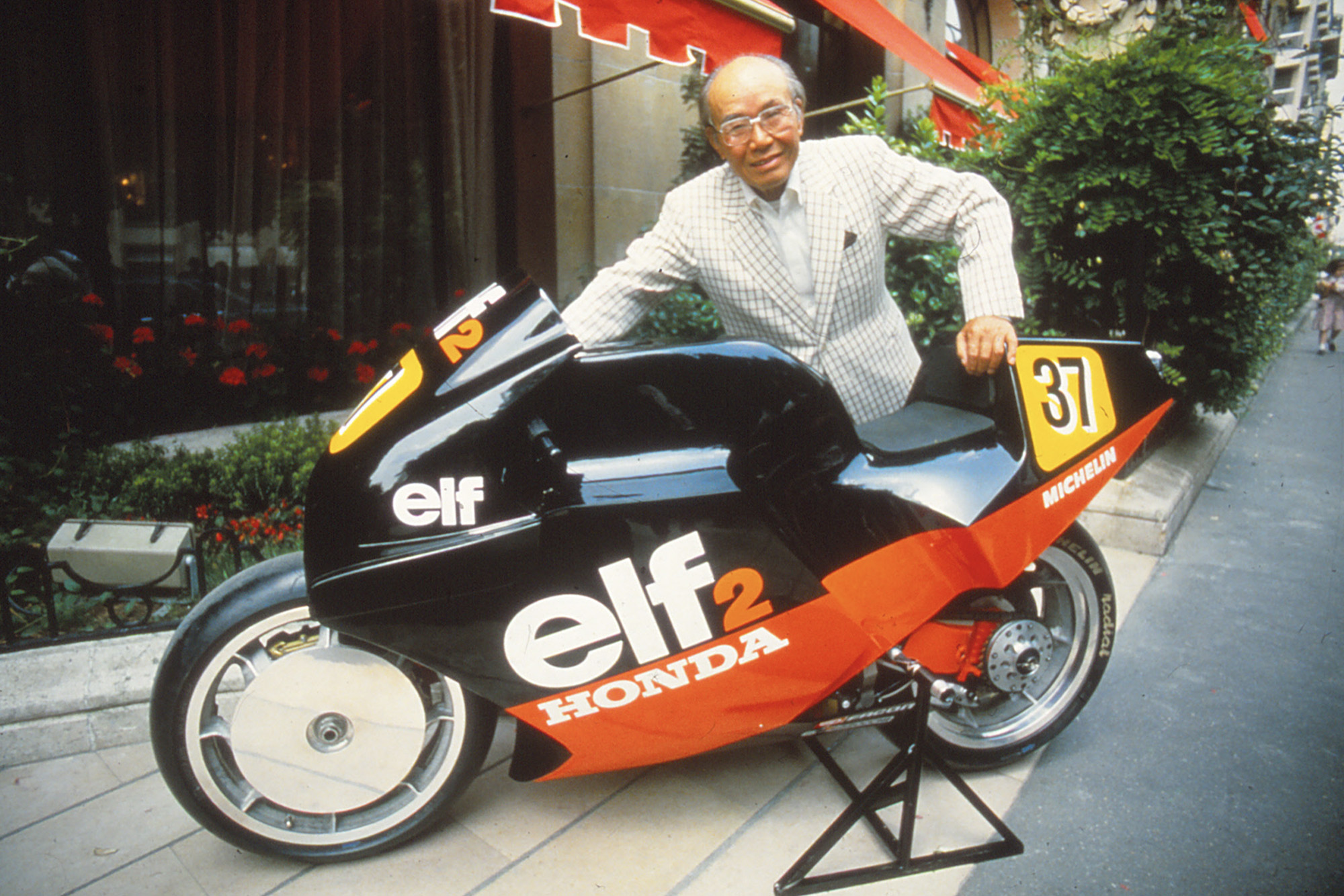 Soichiro Honda in 1985 with the Elf2 GP bike, which featured linked front/rear suspension

In the early 1980s the Elf Honda 500 GP bike connected front and rear suspension via a torsion bar, so when the rear shock compressed under acceleration the front end was forced down to maintain a more level ride. Nice idea, but Elf’s early GP bike rode like a rocking chair.

In the early 1990s Marlboro Team Roberts Yamaha worked with Öhlins to develop the company’s CES system (Computer Electronic Suspension), with the eventual idea of linking the front forks and rear shock, in a better way than Elf’s. They perceived massive benefits if they could make this happen.

Ducati’s current work is interesting because it suggests that MotoGP performance is reaching a point where the most adventurous engineers are once again looking at alternatives to conventional chassis design. Perhaps a 21st century interpretation of the Elf isn’t far away.