What makes Marc Márquez great? He has achieved a title hit rate better than anyone since Giacomo Agostini half a century ago by doing things the others can’t do 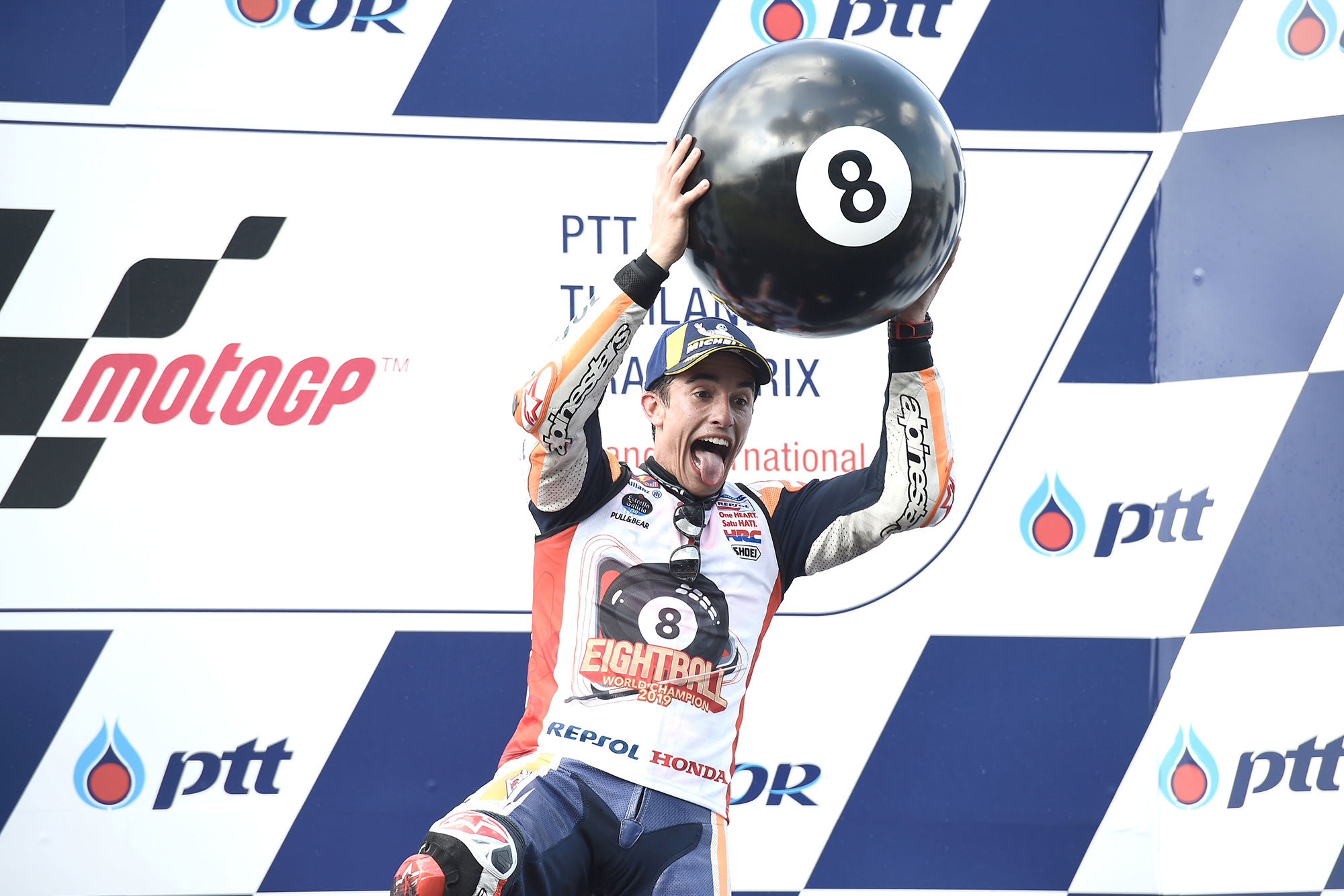 You know that feeling when you ride into a corner on your favourite road a wee bit too fast, so you hold your breath, relax your grip on the handlebars and seek forgiveness for all your sins? Then you make it out the other side and your heart rate spikes and your stomach does a loop the loop? Scary but uplifting – what riding bikes is all about.

I imagine that’s how Marc Márquez feels every time he attacks a corner: front tyre squirming and painting the asphalt black, handlebars tipping several degrees into the turn, elbows for outriggers, then up, up and away, hard on the throttle, an explosion of exhaust noise, a shudder of wheelspin and he’s gone.

The six-times MotoGP king is the only man who can enter corners like this. How come? This is what an anonymous rival factory engineer told me a while back…

“The holy grail of motorcycle racing has always been to come up with a device that can save front-end slides, and now Honda have one; he’s called Marc Márquez.”

It’s as simple as that. Well, pretty much. The one thing Márquez can do that no one else can do is consistently override the motorcycle, specifically the front tyre’s traction limit.

It’s this unique skill that gives him his biggest advantage over his rivals. This is confirmed by top MotoGP tyre and suspension technicians who watch all the riders out on track and examine all their data in the pits.

“For me, there is no one like Marc in the way he controls the front,” says Michelin MotoGP chief Piero Taramasso.

“Marc’s riding style is quite unique – no one else can ride a front slide for so long,” adds Öhlins race engineer Thomas Alatalo. “He has some kind of unreal feeling for how hard he can be on the brakes into the corner and in the trail-braking area, so he makes up most of his time in the final part of corner entry.”

Remember that Taramasso and Alatalo aren’t Márquez’s crew. They work with all the riders, so saying stuff like this will make them more enemies than friends in pit lane. In other words, they mean what they say. 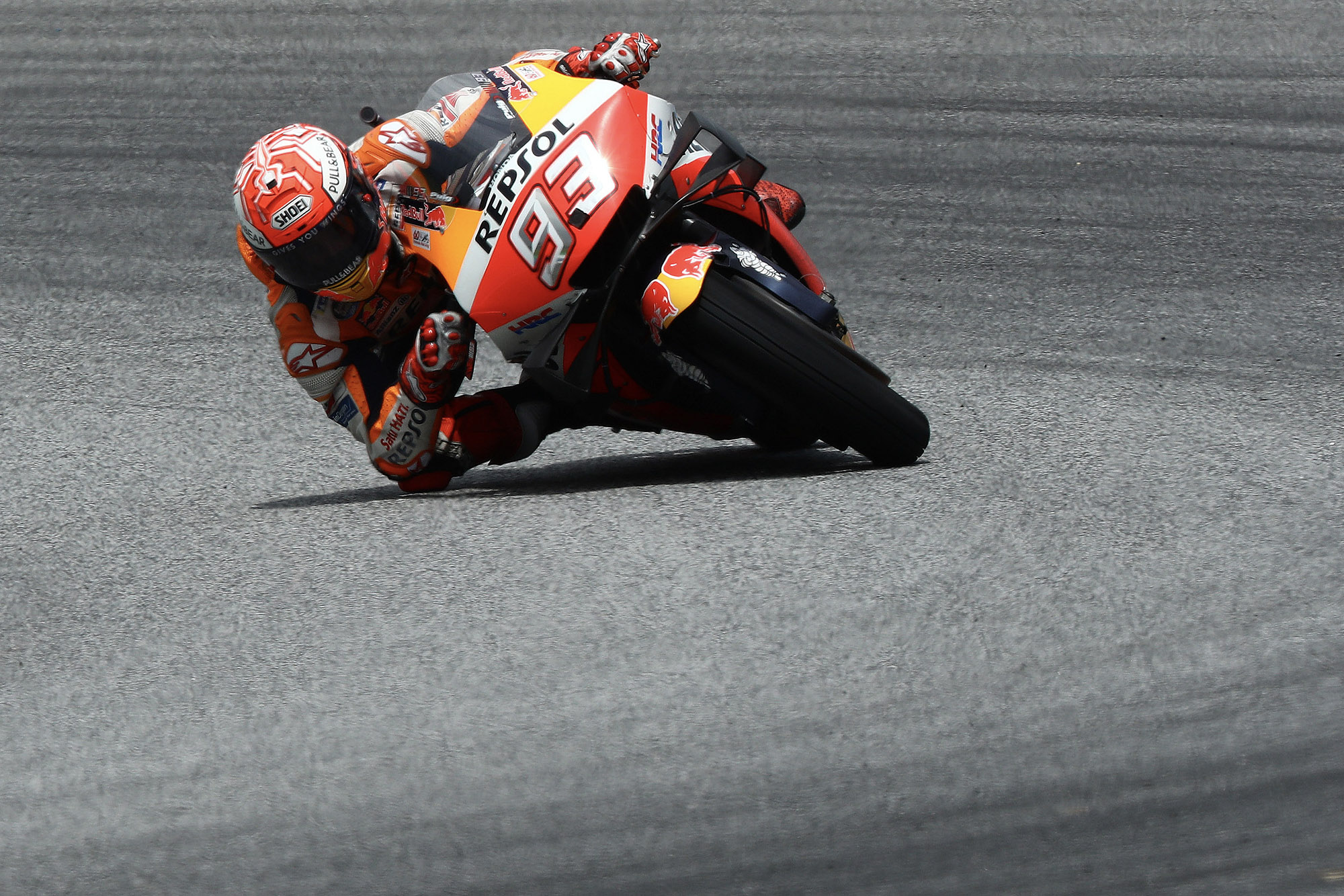 Engineers aren’t the only ones in awe of his unique abilities. Riders don’t usually flatter their rivals but everyone on the MotoGP grid is in awe of Márquez’s talent. One factory rival insists the Spaniard would make the podium on the Aprilia or the KTM. “And if people think otherwise they’ve no idea.”

Another rival talks of following Márquez during preseason testing and watching gobsmacked as he tipped his Repsol Honda RC213V into a corner and turned the handlebars towards full lock on purpose, so he could get the front slick skidding across the asphalt. This gives him a feel for the grip available at each corner, a feel for how the tyre will react when it exceeds that level of grip and what he can do with his elbows to save a crash. No one else can do this.

Márquez has now won six premier-class world championships in seven years – the last rider to achieve that kind of hit rate was Giacomo Agostini, who dominated the late 1960s and early 1970s when his 500cc MV Agusta was often the only factory bike on the grid. Now the MotoGP grid consists entirely of factory bikes, most of them brand new, some of them a year or two old.

A few weeks ago at Aragon someone asked seven-times premier-class champion Valentino Rossi if Márquez is now at his peak. The Italian said he didn’t know because Márquez is still young and will keep improving.

No doubt he will improve, although it’s difficult to imagine what other tricks he can learn, because his front-end magic is only the start.

Márquez’s ability to save front-end slides takes him into corners faster than his rivals, then his super-low body position and elbows-for-outriggers allow him to use more corner speed and more lean angle to get his RC213V turned faster. He can live at lean angles where no one else can survive.

These corner-entry and mid-corner skills also give him an advantage in the acceleration area, because if you’re 2mph faster through the corner, you’re already ahead when you start picking up the throttle, so you can open the gas in a better way, looking after the tyre and exiting the corner faster.

However easy he makes it look, those six MotoGP crowns and 53 MotoGP victories in seven seasons haven’t come easily.

And neither has all that success come cheap. Márquez has crashed 111 times since his premier-class debut in April 2013. But this year is different to all the others. By this time in 2018 he had fallen 17 times. So far this season he’s fallen 11 times, thanks to a motorcycle with more horsepower and a chassis that works better for him, so sometimes he is able to run a softer, friendlier front-tyre compound.

Only two men stand ahead of him in the all-time premier-class championship league: Valentino Rossi on seven titles and Agostini on eight

No doubt his mindset also improved this year because, however much he hates losing, he knows that sometimes he needs to let it go. Last December’s shoulder operation told him he must look after his left-shoulder if he wants to keep racing for as long as he wants and not for as long as his body can stand it.

By last November the shoulder was so bad that he dislocated the joint while celebrating during a raucous title-winning party at home, at four in the morning!

The other major factor in Márquez’s historic successes is his victory addiction. And the Thai Grand Prix proved just how much he hates losing, like those 1990s winning machines Wayne Rainey and Mick Doohan.

At 11am last Friday morning it seemed likely he wouldn’t race on Sunday. That monster FP1 highside had doctors taking him to the local hospital for scans and x-rays which revealed heavy bruising in the lumbar region, his left leg and right hip. No doubt he was still hurting like hell during the race, which he didn’t even need to win. But he had to win it, both for “the instant gratification” (as Doohan used to say) and to put Fabio Quartararo in his place one more time. 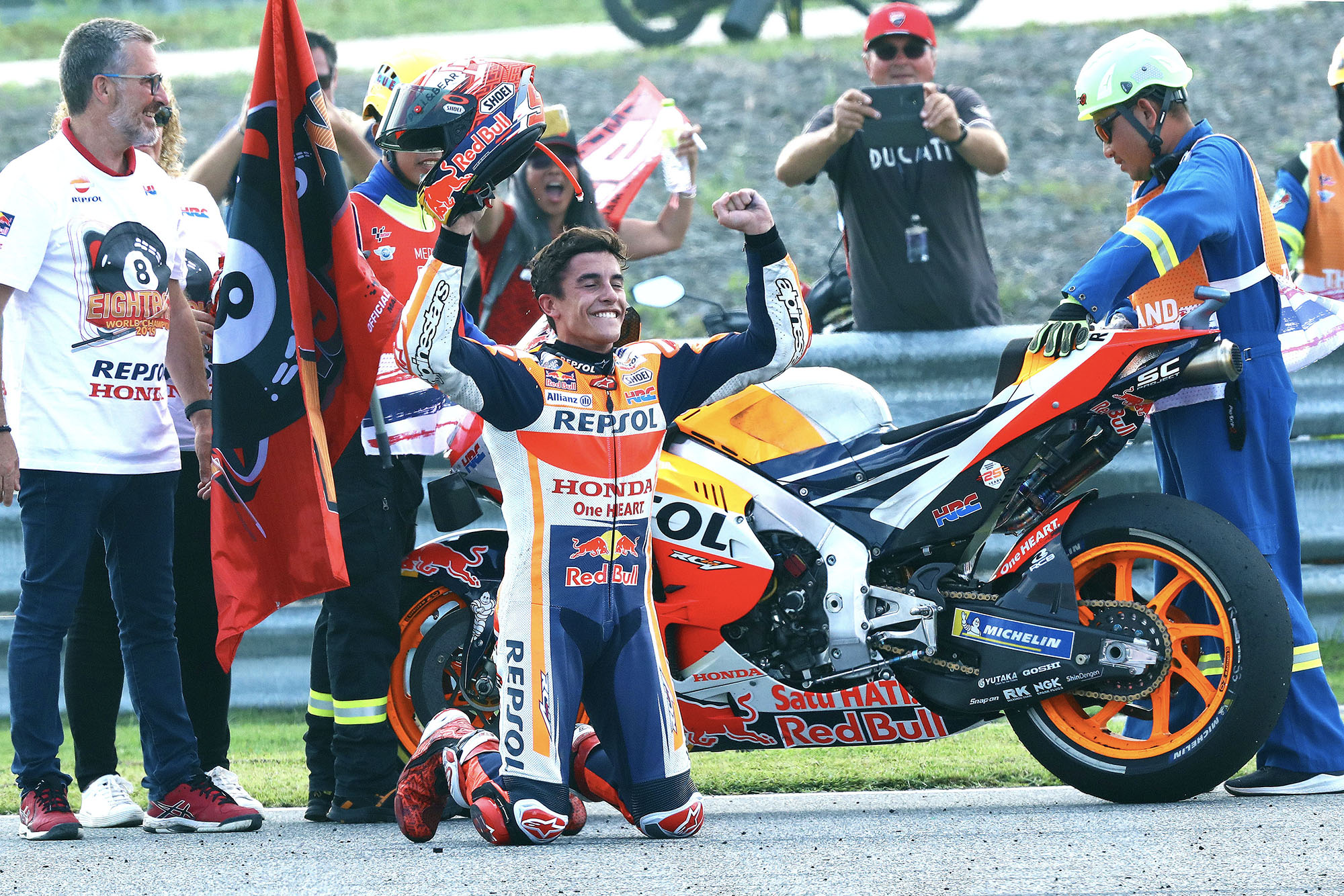 “Marc is like Rainey, who would kill to win,” says Öhlins racing manager Mats Larsson, who has been a paddock suspension guru since the late 1980s. “Wayne was terrible to have around in the pit box when he’d got beaten, but come Monday he was the best guy in the world. He was so focused and motivated. Marc is the same. You see when he crashes he’s up and running to get the bike going again.”

Quartararo and Álex Rins are the only two riders who are close to Márquez in their ability to live on the edge with the front tyre. But they will have to step it up some to beat him regularly.

Until they do that it’s difficult to see anyone getting the better of him. He has already won six MotoGP titles in seven years. Only two men stand ahead of him in the all-time premier-class championship league: Valentino Rossi on seven titles and Agostini on eight. If Márquez equals or beats Ago then he will lay his claim to the title of greatest of all time.

I’ve certainly never seen anyone ride like Márquez – skidding and losing the front multiple times during a race. It’s a joy and a thrill to watch because you know that he will always dance on the edge of the precipice, because that’s his favourite place in the world.