Yamaha management probably don’t know whether to laugh or cry.

Franco Morbidelli’s superb third MotoGP victory was Yamaha’s seventh of the year and puts the factory back in the hunt for the 2020 constructors’ championship, the title that may not mean much to many fans but, unsurprisingly, means a lot to constructors.

If Yamaha does win the prize it will be despite the 50 points taken away by the FIM stewards for using illegal engines at the season-opening Spanish GP and in spite of ongoing troubles with its 2020 YZR-M1.

Ironically, the engine controversy has allowed Yamaha to prove how reliable its engines can be.

“Franco is the fastest rider in MotoGP. He is the guy in the best shape”

Morbidelli’s Valencia success was a minor miracle of engine mileage because he’s been down to the last two of his five engines since Brno in August. He obviously isn’t allowed to use his first two, equipped with the wrong valves, and he blew his fourth during the second race at Jerez.

On Sunday Morbidelli beat Jack Miller’s lightning-fast Ducati GP20 using a YZR-M1 engine that had done around 1600 miles, almost double the usual mileage limit. He had already raced the engine in the San Marino, Emilia Romagna, Catalan, Aragon, Teruel and European GPs. No one knows for certain, but this must surely be the oldest engine to have won a race in the four-stroke MotoGP era.

Considering the fact that Maverick Viñales had to withdraw his fourth engine – with 1500 miles on the clock – at the first Valencia race, it will be an even greater miracle if Morbidelli makes it through next weekend’s Portimao season finale without cracking open a sixth engine and incurring a pit-lane-start penalty.

Incredibly, Morbidelli has achieved all three of his victories with the slowest bike on the grid. (Well, except for Lorenzo Savadori’s Aprilia in yesterday’s race.) He is using fewer rpm to coax more life out of his increasingly tired engines, which made his M1 a massive seven miles an hour slower than Miller’s 206mph Duke.

Morbidelli is so impressive – he lets nothing faze him, he just focuses on the things that are within his control, which yesterday was setting a super-fast pace and snatching the lead back from Miller with that audacious last-lap move at Turn Five. 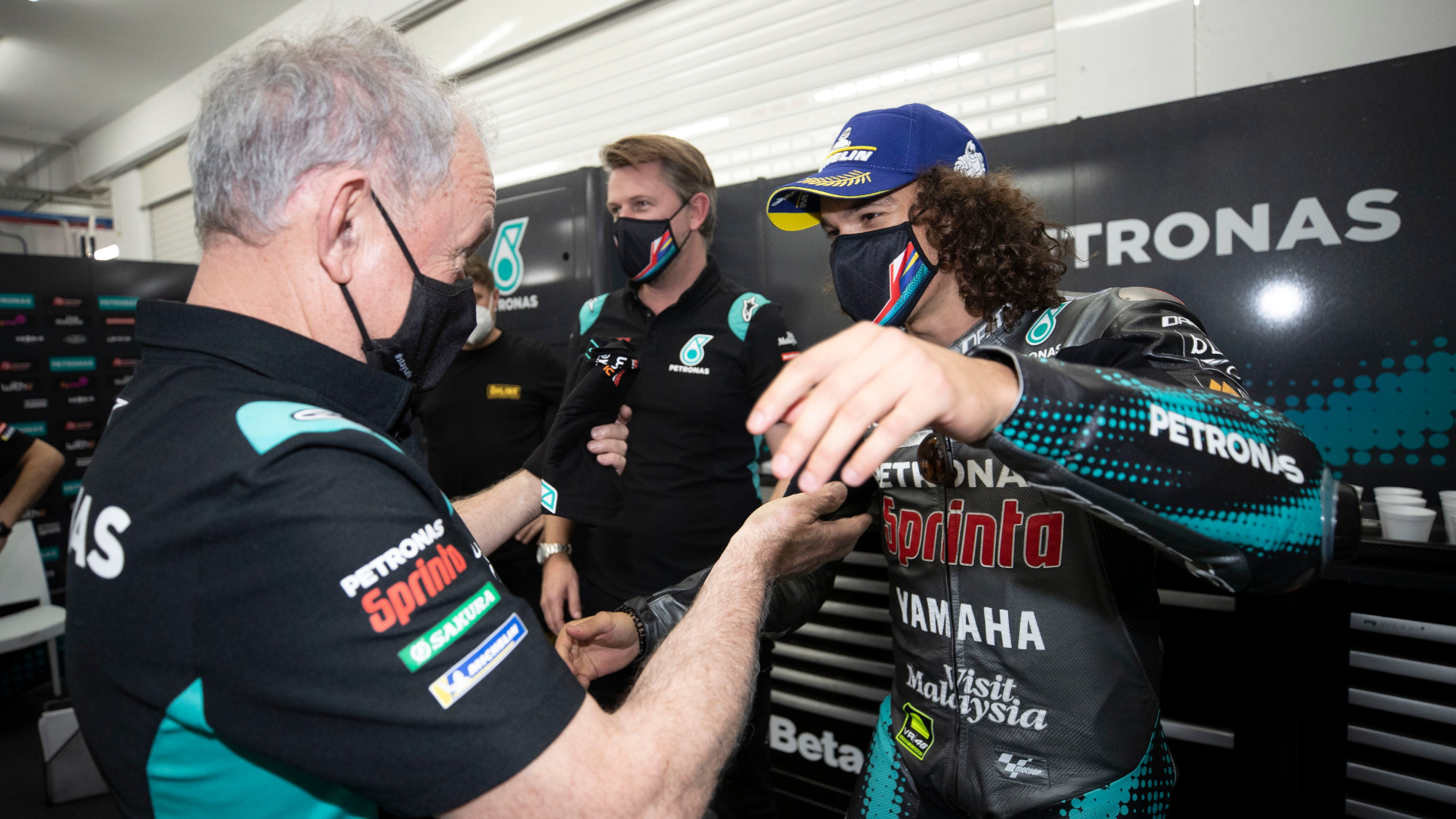 But why is Morbidelli so fast, when his fellow Yamaha riders are so slow, relatively speaking? Is it really because he rides a 2019 M1 while Viñales, Fabio Quartararo and Valentino Rossi ride 2020 M1s?

That is the generally accepted view, but Rossi isn’t so sure. He thinks the difference is the man, not the machine. Although perhaps he should’ve said men, because Morbidelli has Ramon Forcada, Yamaha’s wisest man in pitlane, on his side.

“I raced last year with the 2019 bike and this year with the 2020 bike and for me the difference is not very big,” said Rossi after Sunday’s race. “I think Franco is doing an unbelievable season and at the moment he is the fastest rider in MotoGP. He is the guy in the best shape – for me this makes more difference.”

Rossi and Viñales first used the prototype 2020 M1 during last November’s post-Valencia. The frame looked like the biggest change Yamaha had made in a decade, with a very different construction around the steering head. But even then Rossi didn’t seem convinced. “The frame is different but the feeling when you ride is very similar,” he said at the time.

On the other hand, Quartararo feels the two bikes behave very differently. He used his 2019 M1 at the 2019 Valencia tests, equipped with Michelin’s softer-construction rear tyre, and was faster than he was during the last two weekends at the track.

“In that test, our pace was extremely fast with last year’s bike and exactly the same tyre as we raced these last weekends,” said the Frenchman after crashing out of Sunday’s race. “And this year we couldn’t even get within one second of that pace.”

The 2020 bike usually only works at its best when there’s lots of grip, like at Jerez where Yamaha dominated, and at Misano where Viñales won his only victory so far. And the latest M1 has fared even worse at recent races, where track temperatures have dipped with the arrival of autumn.

Meanwhile Morbidelli’s 2019 M1 seems to have a much wider window of operation, so he can race for wins regardless of grip and track temperature. 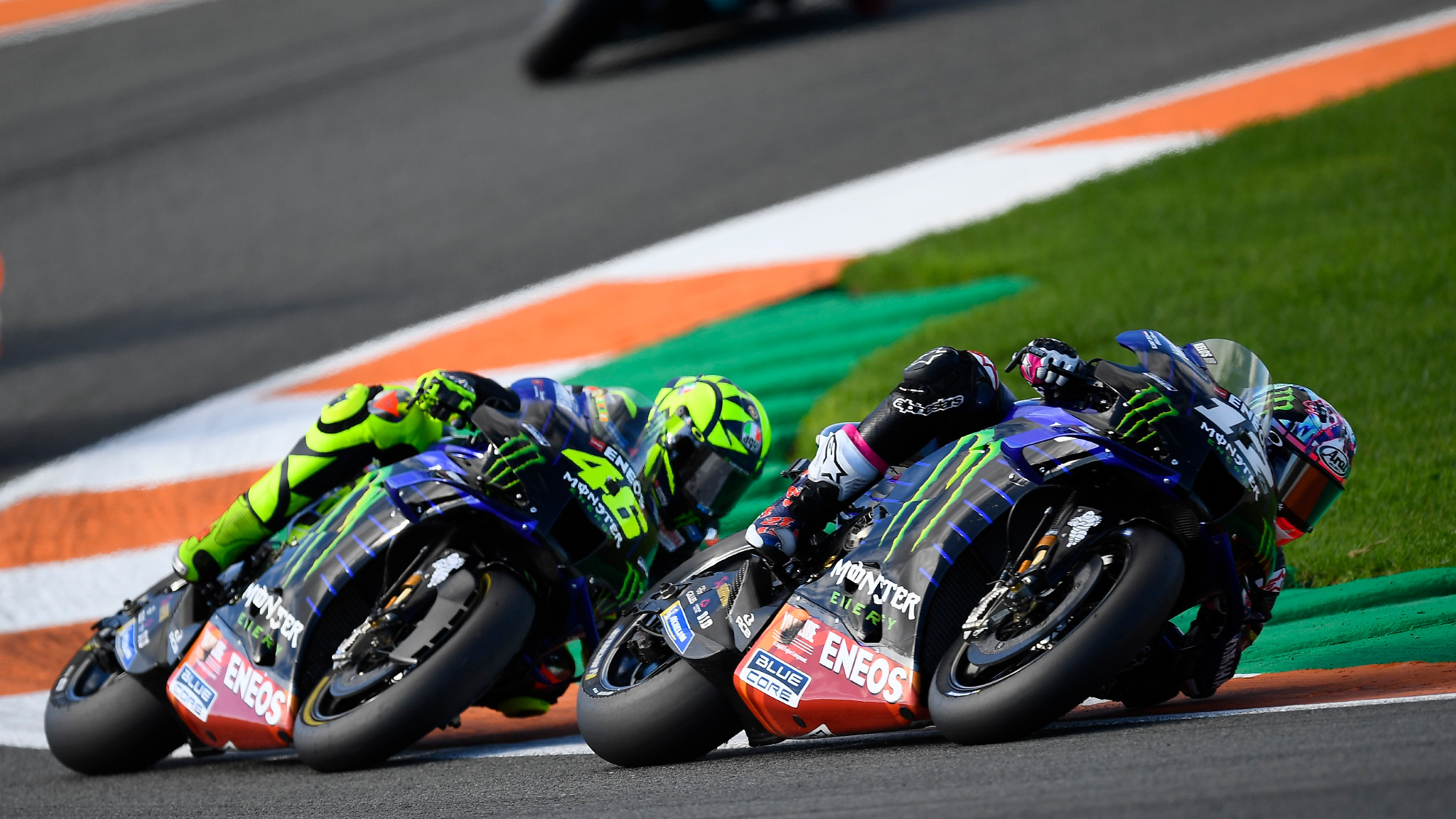 Viñales and Rossi had a grim race, finishing tenth and 12th

Usually, riders scream like crazy for the latest-spec bikes, but Morbidelli sounded perfectly happy when he announced on Saturday that he will continue to use 2019 chassis next season.

The obvious answer for Viñales, Quartararo and Rossi is to revert to the 2019 bike so they can make back-to-back comparisons, but that isn’t possible because the 2020 M1 engine doesn’t fit the 2019 chassis. Otherwise they would already have swapped chassis.

While Rossi used Valencia Two to regain his feeling – Sunday was his first race finish since September’s San Marino GP – Viñales and Quartararo used the weekend as a kind of post-season test session with their 2020 bikes, trying to find a development direction for Yamaha engineers, because this year there are no actual post-season tests.

Both tried multiple different set-ups – “We turned the bike upside down,” said Quartararo – but with no real progress.

“We don’t have rear grip, this is the problem and this is the difference compared to last year,” he said after finishing tenth, averaging seven-tenths per lap slower than Morbidelli. “We have to be honest. I don’t know what we are going to do for next year, because it’s difficult to have a clear direction, because we’ve changed many things on the bike but we haven’t improved the grip. So we don’t know. I really don’t know. It’s difficult to say.”

This is nothing new for Yamaha. The factory has been flailing around pretty much since MotoGP’s new technical era of Michelin tyres and Magneti Marelli software began in 2016. This is Yamaha’s most successful season since then, but still confusion reigns.

Rossi must be hoping that this is the nadir of his career, an annus horribilis that make his previous anni horribiles pale into insignificance.

And he has that power within his hands. Surely he is already considering his post-racing future. In 2022 VR46 will take over the Esponsorama Ducati grid slots. Which bikes will VR46 use? Well, the Suzuki is now the best bike on the grid and Rossi is very good friends with Suzuki team-manager Davide Brivio, the man that brought him to Yamaha. And four Suzukis on the grid would delight Dorna, which has always wanted six manufacturers, each with four bikes on the grid.