In 2020, following KTM’s first complete redesign of the RC16 since the bike’s debut, the Austrian factory had a breakthrough year, claiming its first victories and missing a podium place in the constructors championship by just two points.

But not for long. The RC16 disappeared without a trace at the start of last season, until mid-season when the bike started winning again, only to disappear once again.

So, what explains the RC16’s strangely up-and-down 2021 and how are KTM engineers fixing the bike for 2022?

Many of KTM’s problems can be attributed to one factor: the RC16 works in a narrow window of opportunity, like Yamaha’s 2020 YZR-M1, so its performance is determined by the racetrack and the conditions.

“We didn’t visit so many racetracks in 2020, so maybe things looked rosier than they were in reality.”

“We need to bring a wider base to the track, a wider window, because if the temperature isn’t right, or the rider isn’t riding perfect, we miss the window,” says KTM motorsport director Pit Beirer.

“We are in a window that’s quite small, which is quite scary,” agrees Paul Trevathan, crew chief to Red Bull KTM rider Miguel Oliveira, KTM’s most successful rider, with three wins so far. “When the tyre allocation doesn’t quite fit us or the track’s a bit cooler or hotter then we’re in trouble, so we need to make the window wider to be competitive all season. The round black things are what connect you to the ground and if you’re not making them work you’re in the shit. This is what we really need to understand.”

Trevathan believes that KTM’s impressive 2020 results were a bit of a mirage, for the same reason. Due to the pandemic, the 2020 championship was disputed over just nine racetracks, half the normal number, and KTM was lucky that most of them suited the RC16.

“We didn’t visit so many racetracks in 2020, so maybe things looked rosier than they were in reality.”

KTM’s results bombed at the start of 2021 due to a change in Michelin’s front-tyre allocation. Without its favourite front tyre available the RC16 really struggled – the bike had ended 2020 win a win and two further podiums but didn’t score a single podium at the first five races of 2021. 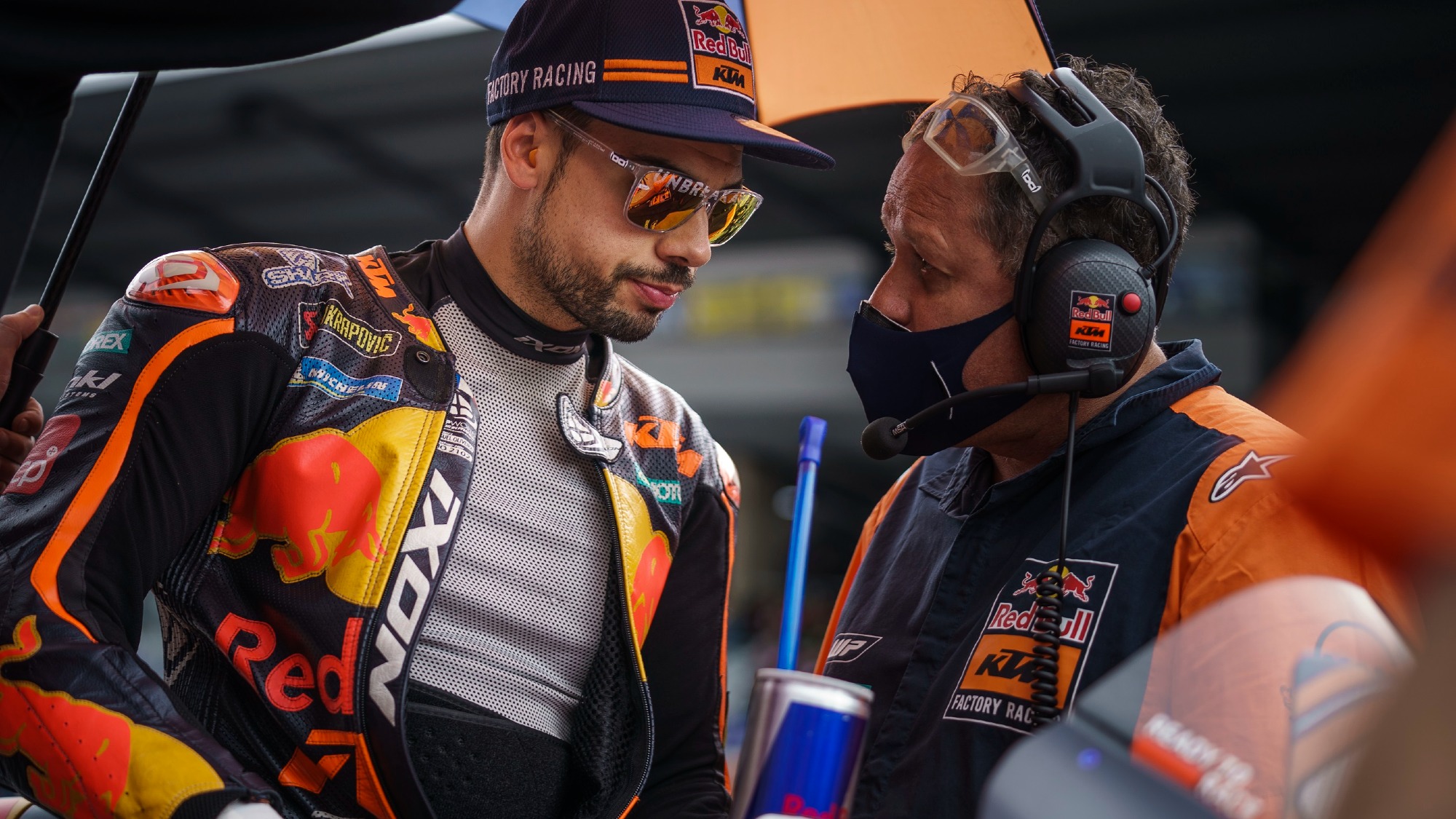 “The front tyre was a shock – we thought Holy Christ, what are we going to do to get around this?’” adds Trevathan. “The first part of the year we were trying to understand how to work around the tyre. We went out of our comfort zone with fork settings – damping, spring preloads, oil levels and so on – to take the stress out of the tyre, but that didn’t make us faster, it just allowed us to at least use the tyre.

“The tyre was an issue because we make the lap time by attacking the braking zones and flicking the bike very quickly. So when you don’t have the support from the front tyre, the tyre feels like it goes square, so then you have to take all the speed out of the bike before you can release the pressure off the tyre and turn.”

“I think this story with the front tyre brought us into a situation where we started to doubt things,” says Risse, who previously ran KTM’s RC8 IDM superbike and Moto3 projects. “You have to reinvent yourself a bit, so the results dipped down, then you start getting some better results again, the bike goes up step by step and you move forward again.”

KTM was back with a bang when Oliveira scored three consecutive podiums: second at Mugello, victory at Catalunya and another second at Sachsenring, where he chased Marc Márquez for the win. These results followed the arrival of a new chassis, a slightly revised version of the all-new 2020 iteration.

“It all fell together, the chassis wasn’t a massive thing, but Miguel could ride the bike slightly differently, which brought us back into that good area,” says Trevathan. “You see other manufacturers have these dips and for a while it can feel like you’re locked in a hole, but we worked with Brad’s side of the garage, sharing info and trying different things – okay, you go left and we’ll go right – which worked really, really well.” 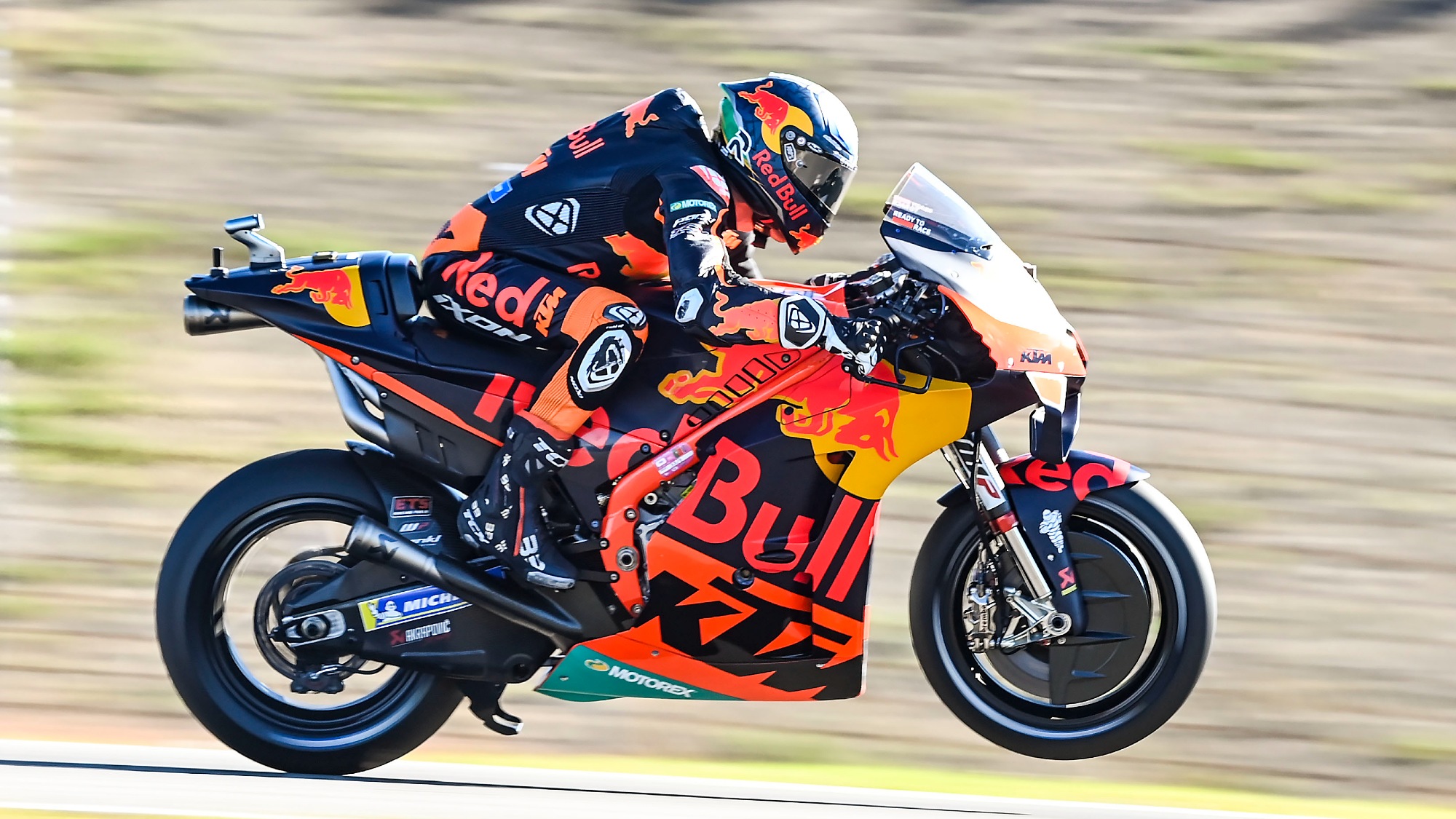 “Miguel’s crash was the big thing that took the wind out of our sails,” reveals Trevathan. “The way the riders hang off the bikes now their wrists are never straight, so all the little movements with the throttle became a problem, so he had to ride the bike differently and then when you’re in a hole you’re chasing your tail and you start throwing parts at the bike.”

Without Oliveira leading the way, doubts once again set in.

“Our riders always push each other, so when one of them is going well, the others want to go better, so the whole project improves,” explains Risse. “On the other hand, if the guy that maybe has the most potential at that moment isn’t riding at the top of his performance then maybe the others start to doubt things. And this can be way more extreme than how much the bike is changing.”

KTM had another issue in 2021, because it was the first season the factory didn’t have MotoGP concessions, which in previous seasons had allowed its engineers to introduce upgraded engines and do lots of testing with their full-time riders.

KTM engineers are now working hard to widen the RC16’s window of opportunity for the 2022 season.

“It’s a character thing – it’s the black magic of chassis stiffness and the tyres and all these things coming together,” says Trevathan.

KTM has been working on chassis stiffness throughout the winter, because getting the right amount of lateral and torsional flex in the right places has a huge effect on how the bike behaves in turning, cornering and accelerating. 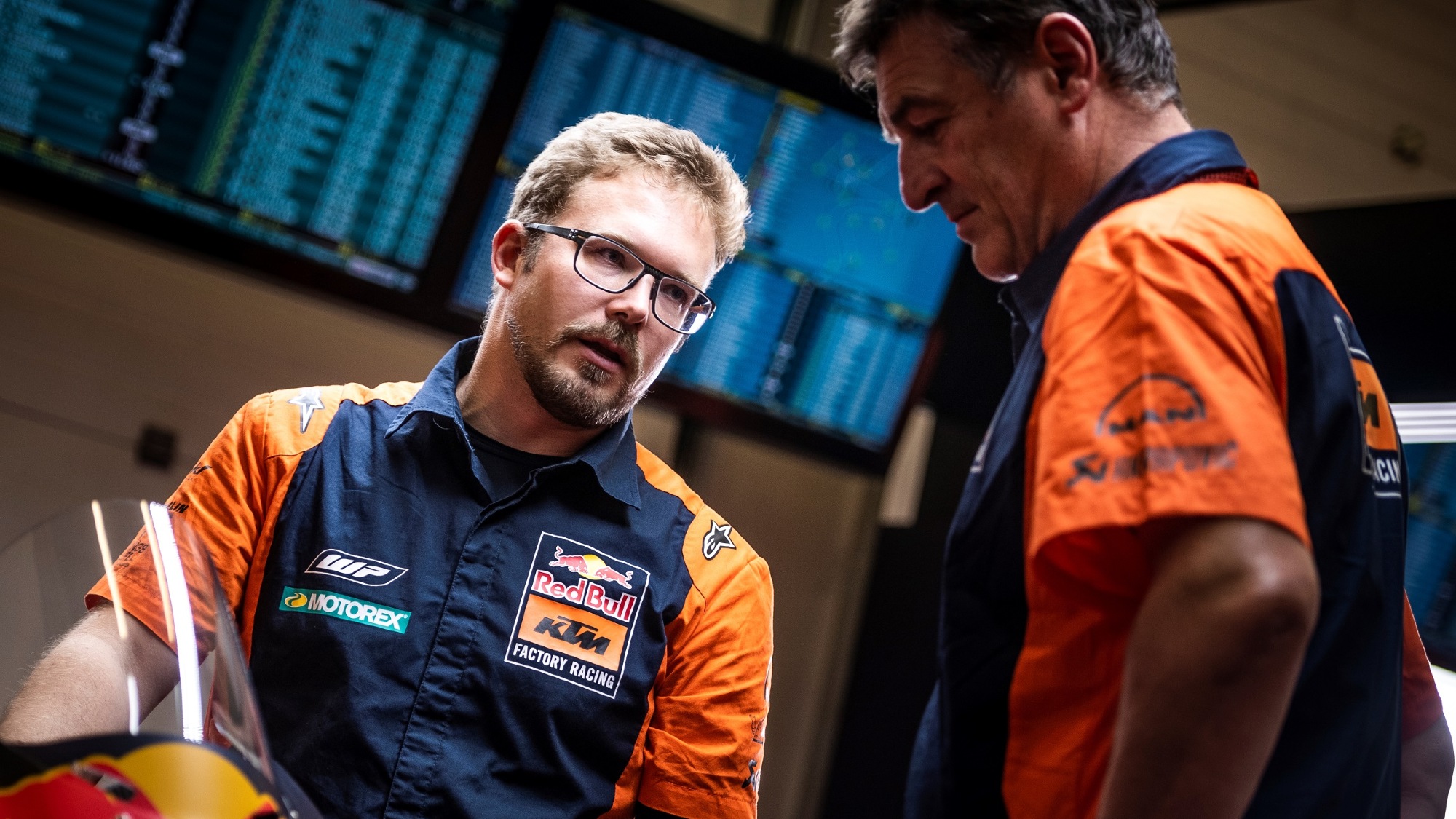 “Drive acceleration is created mostly by how the rider picks up the bike – this creates more grip than you can make with any technology,” says Risse. “The most important thing to help the rider lift the bike is having the room to do that, which means having the bike facing in the right direction, which means getting the bike stopped and turned to prepare the exit.

“We worked on geometry and stiffness rates, plus the riders adapted a lot. They are all very talented and if you give them time they will find ways to manage a problem from their side.”

There is one other area of performance that KTM knows it needs to improve to consistently compete at the front: qualifying.

MotoGP is so close now that grid positions matter more than ever – if you’re not on the front two rows you have little chance of fighting for a podium finish.

Last year KTM’s four riders didn’t score a single front-row start and only achieved five second rows from 18 races, four to Oliveira and one to Binder, who is very much a Sunday man. Compare that to world champion Fabio Quartararo who scored 14 front rows and one second row from 16 races. It’s no coincidence that every time Oliveira and Binder did qualify well, they battled up front.

“To improve qualifying is one of our priorities,” says Risse. “From the engineering side it would help a lot to have a bike that’s better over one lap, because then you can form a plan of how you manage your race weekend. You can decide how much focus you want to put on a qualifying lap and how much experience you want on soft tyres, against playing it safe and keeping a spare soft rear to go from Q1 to Q2, if FP3 doesn’t work out.”

Time is so limited on Saturdays – with FP3 followed by FP4, Q1 and Q2 – that pit-lane engineers can’t do much to transform their race bikes into qualifying bikes.

“The bike is always a compromise between race pace and time attack,” continues Risse. “We want to make our bike faster for one lap, but a lot depends on the tyre allocation and the track.

When Oliveira and Binder are on track they agree that what the RC16 needs most is better corner-exit performance.

“We lose a lot of stability out of the corners,” says Oliveira, “The tyre is moving quite a lot, so there’s a lot of wasted potential to the ground.”

“We’re losing time in places where we’re at full throttle because we’re not hooking up the way we should,” adds Binder.

KTM believes this problem is triggered by what happens earlier in the corner, which can’t be solved purely through engineering. 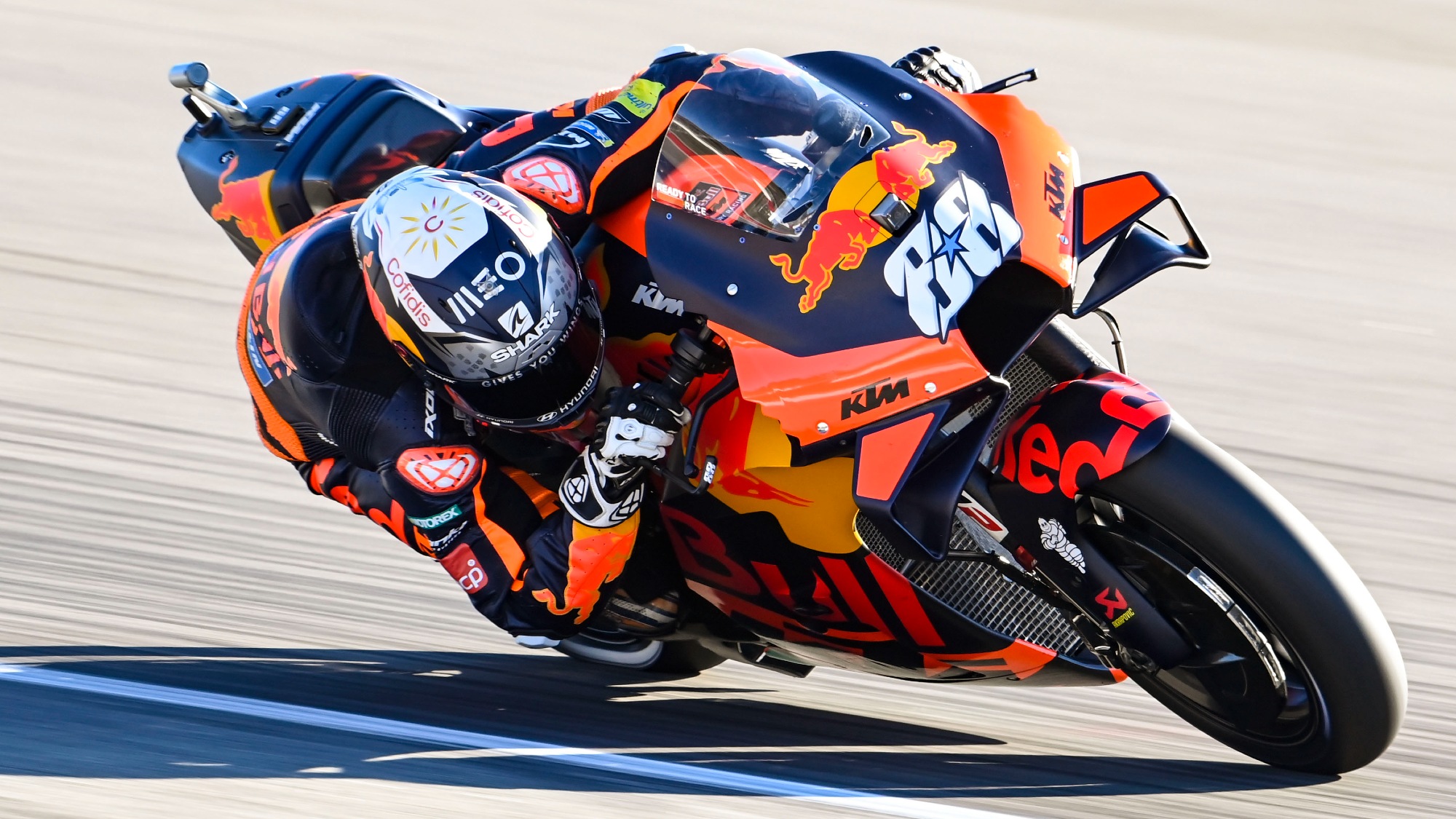 “Sometimes during a time attack it helps to get the tyres into the correct temperature earlier, so the rider can attack half a lap earlier, so he can make two proper time-attack laps instead of one, which will up the pace more than what you can do in terms of producing maximum grip and stopping from the bike.

“Other times it’s about making a more radical package to squeeze more out of the tyre.

“The first real qualifying session is the last minutes of FP3 and you can’t do any big magic with the bike there because you need both bikes ready to make a normal session. You can push some buttons to do something with the electronics and you can change spring preload or ride height a bit, but not much more.

“If you make it directly through to Q2 you may think about doing something fancy but you don’t know that you’re through until the end of FP3. If you do go straight to Q2 you might change something more, like the weight distribution, or something that indirectly affects the aero, like the geometry.

“If you don’t go straight to Q2 the weekend becomes difficult because you have to spend more energy and take more risks.”

And of course it’s not only the motorcycle in qualifying either. It takes a very special and very brave rider to take the bike past its limits in Q1/Q2 to find the extra two or three tenths that make the difference between the second row and the third or fourth rows.

“Qualifying is something we must improve but part of it is also rider philosophy,” explains Risse. “Every rider has his way and you saw what Pol [Espargaró, KTM rider from 2017 to 2020] could do with our bike in qualifying [the Spaniard scored two pole positions with the RC16 in 2020] and you see what Brad produces in races.

“Of course we work with the riders on all aspects of riding and how to approach the weekend. Brad is completely of aware what he needs to do in qualifying, but every rider is different.”

Risse’s comments underline the fact that although MotoGP is more high-tech than ever it’s still the rider that makes the difference. This is one reason why MotoGP riders are under more pressure than ever, so don’t believe anyone that tells you they have an easier time thanks to technological advances.

On the other hand, Risse, Trevathan and the rest of KTM’s MotoGP engineering group are also under big pressure going into the 2022 season.