Conspiracy theories are a big deal these days – people adding two and two to make five, explaining away complex issues with simple (but incorrect) answers.

So when Fabio Quartararo ran away with last month’s British Grand Prix at Silverstone, while his main title rivals Pecco Bagnaia and Joan Mir finished 14th and ninth, complaining of dud tyres, the conspiracy theorists leapt into action.

Quartararo is French and MotoGP’s tyre supplier is Michelin, so obviously the French company had nobbled his rivals’ title hopes. Such an easy (but incorrect) answer to a complex issue.

MotoGP tyres aren’t allocated by Michelin. The entire distribution process is given to teams association IRTA, which randomly creates 24 sets of barcoded tyres that are then randomly allocated to each of the riders.

A twist was added to the conspiracy theorists’ tale at the next race at Aragon, where Quartararo slumped to eighth, complaining of tyre issues – obviously Michelin had decided to atone for its Silverstone sins!

However, there’s no doubt that Bagnaia, Mir and Quartararo did have grip issues at those races, just like other riders have struggled with tyres at other races. So what really happened? Was Michelin at fault? Or someone else?

Bagnaia qualified second at Silverstone, then went backwards in the race, scoring two points instead of a likely 20, which could end up deciding the outcome of the 2021 MotoGP world championship.

Michelin admits there was something wrong with Bagnaia’s rear slick in that race.

“From the data it looks quite clear that Pecco’s tyre didn’t work properly from the beginning of the race,” says Piero Taramasso, the man in charge of Michelin’s motorcycle racing operation. “He complained about just one part of the tyre – the edge on the right side, so now we are doing microscopic analysis to understand the problem. We are also checking the machine that built the tyre.

“This is the first time we have seen something like this in four or five seasons. We’ve had many complaints, but many times these are related to the tyre pressure used, the track conditions, the speed of the race and so on. There are many details that can affect tyre performance.”

What about Mir, who struggled to ninth at the British GP, complaining of a major front-tyre problem? The world champion had finished fourth at the previous race and took third at the next race, so something obviously went wrong at Silverstone. 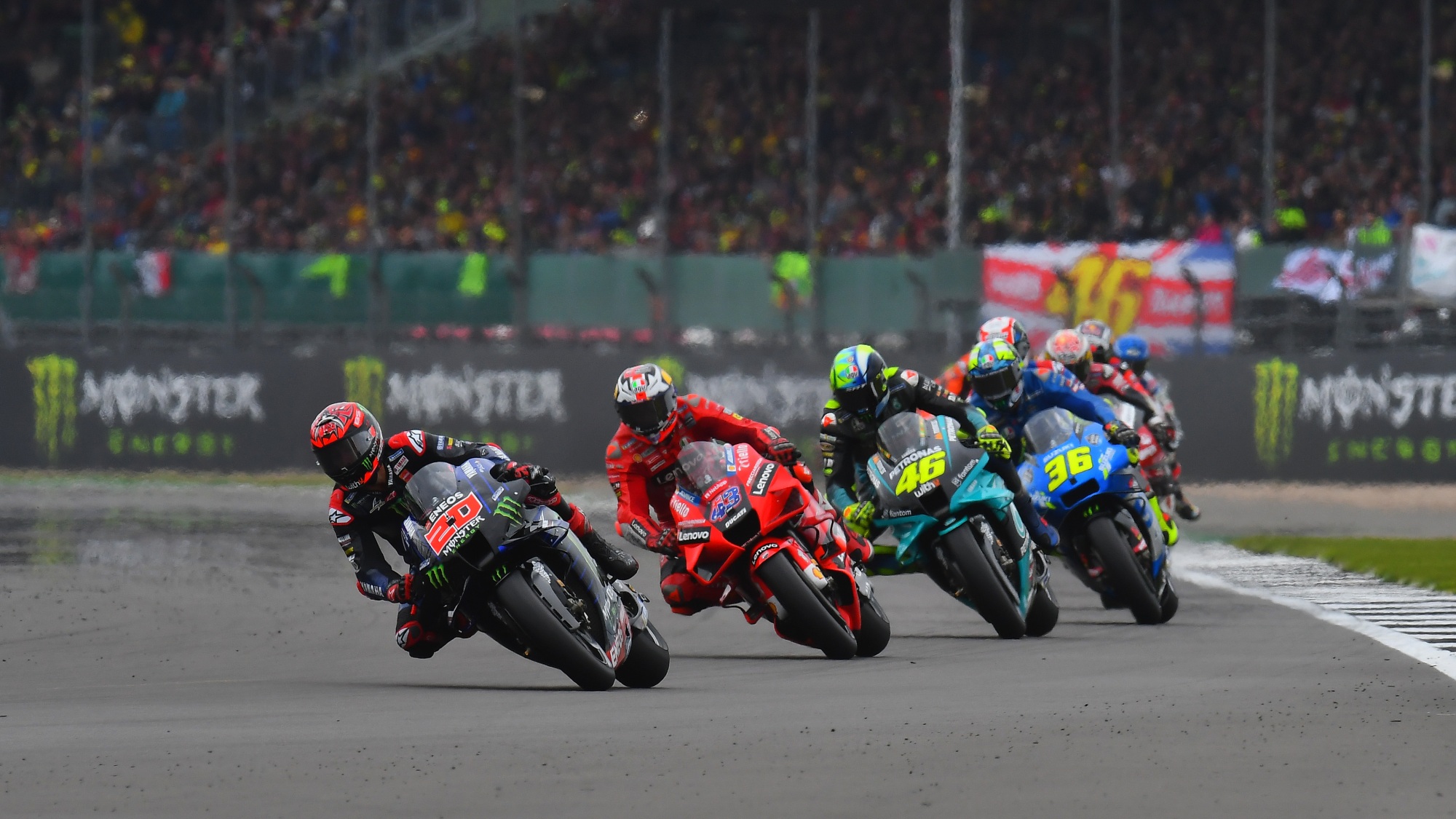 Quartararo dominated at Silverstone, while reigning champ Joan Mir (no36) struggled with a dud front tyre

“Joan used the soft front,” adds Taramasso. “From our analysis it was clear that his bike was understeering much more than the others in the long, fast right-handers at Silverstone, then his performance dropped. For us this is normal, it’s not related to a tyre problem, just high wear.

“Fabio won the race with the same soft front, but he was out front. We know that when a rider is riding alone the front tyre gets less stressed, because when you are in the pack you are trying to overtake, so you stress the tyre more. Also there’s the heat from the other bikes, so you have many things that penalise the performance.”

Suzuki disagrees with Michelin’s analysis of Mir’s front tyre. Its engineers say Mir ran the soft front in every practice session without problems, but in the race the tyre was sliding after three laps and partly delaminated.

And, finally, what about Quartararo’s rear at Aragon? The championship leader said the tyre felt “weird” from the start, with poor grip and traction.

“The situation with Fabio’s tyre at Aragon was clear,” says Taramasso. “We analysed the data, Yamaha analysed the data and we both agree it wasn’t a tyre problem. Yes, he had some strange feeling but he now says that it wasn’t the tyre. Many times this is the case.”

“It’s true that this year more riders complain about tyres than they did in the last years but the tyres are built by the same machine, with the same compounds. We haven’t changed anything in the way we work.

“Our quality control is very high, from raw material to finished product, but you have to remember that tyres are made out of rubber, which is a living material – it’s not stable, like steel. I don’t say we’re perfect but…”

In other words, some of the complaints riders make about Michelin are justified but others aren’t.

Michelin does admit that its MotoGP tyres are sensitive to treatment, both in the garage and on track, so teams have to work very hard to prepare the tyres and then advise their riders how to use the tyres during the race. 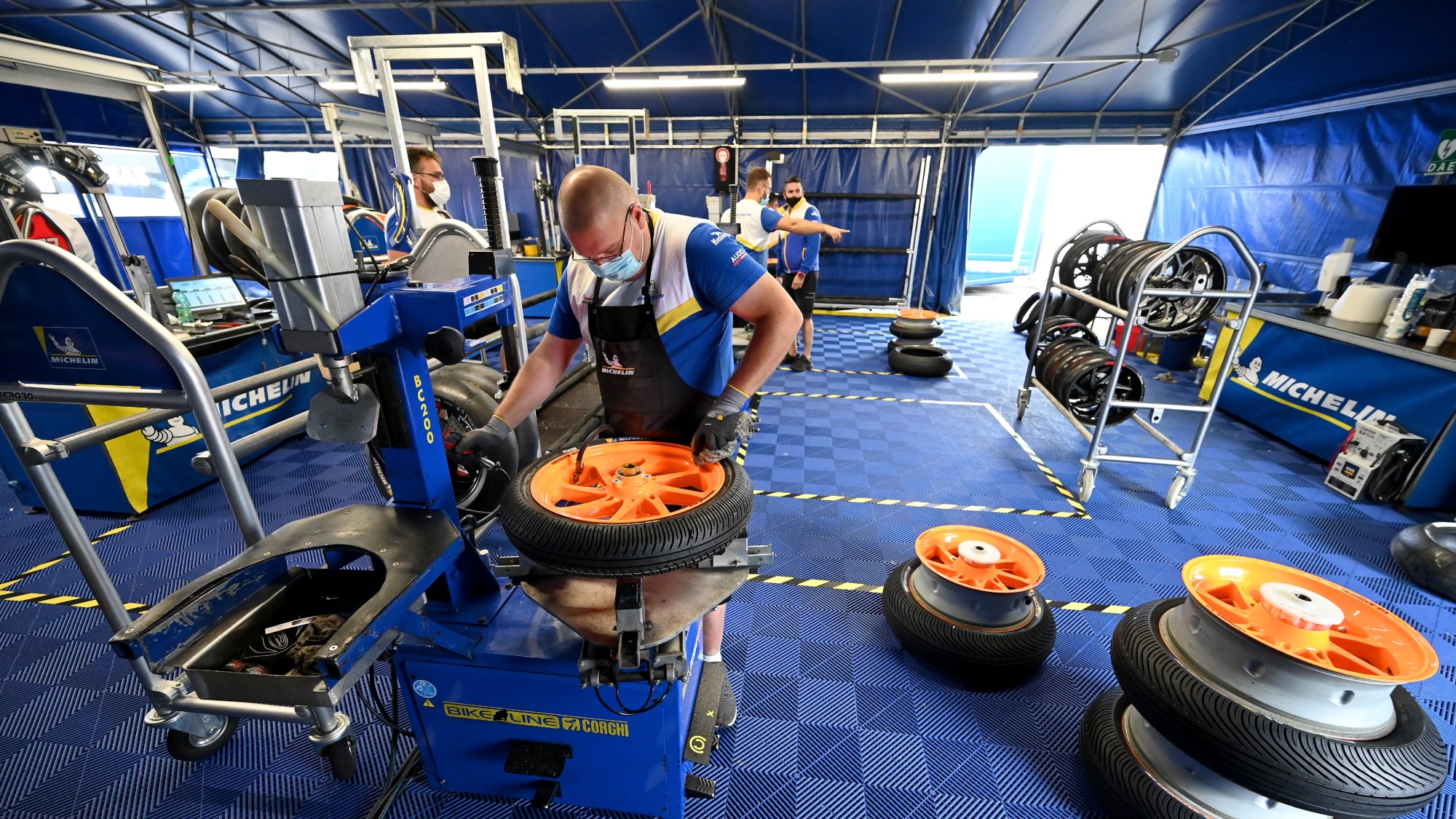 Most MotoGP teams now have two technicians whose only job is to prepare the tyres, retrieve data from the tyres, analyse the data with the team’s dedicated Michelin technician, then share their knowhow with their engineers and riders.

“We also exchange computer models of the tyres so teams can understand better how the tyres work – when they need to put stress on the tyres and so on.” 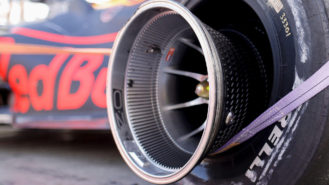 Tyre temperature and pressure are everything in motor sport – and not only in MotoGP. In Formula 1, or any other category where the stakes are high and the lap…

When to stress the tyres is an important part of current MotoGP race strategy. Sometimes it’s better to hammer the tyres from lights out, other times it can be better to ease the tyres into the race to get the best race-long performance.

The riders have so much to think about!

“When track temperature is very high – over 40 or 45 degrees – then it can be good to not stress the tyres too much too soon,” says Taramasso. “On the other hand, if the track is cold, you have to push straight away.”

Yamaha engineers believe that Quartararo’s mistake at Aragon may have been pushing too hard, too soon with his rear tyre.

One complication is the narrow operating temperature range of some compounds. 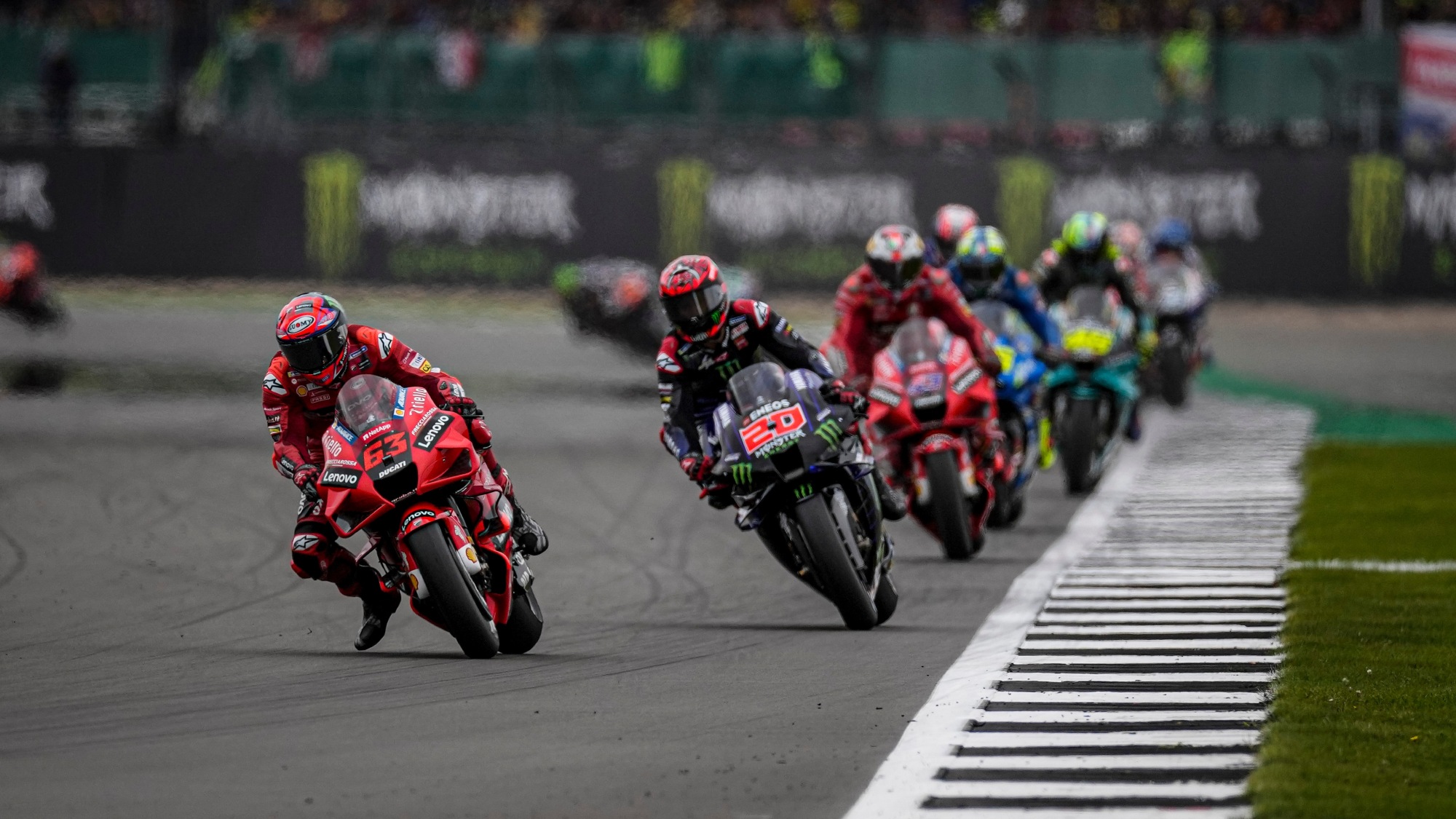 Bagania started well at Silverstone, then dropped to 14th with rear-tyre trouble

“If I had to say what is the difficulty with our MotoGP tyres it’s that sometimes the tyres work in a very narrow window of temperature,” Taramasso continues. “You have to be exactly inside that window and if you are a bit outside, the tyre doesn’t work.”

This is why riders struggle with grip in some races, so one weekend they are fighting at the front and the next they’re mid-pack.

Michelin says the ideal operating temperature for its front tyres is around 100 to 120C. The rear range is 100 to 125C. Go much above or below these numbers and you are in trouble.

Obviously, race preparation includes doing as many consecutive laps as possible on one set of your chosen race tyres during Saturday practice and Sunday warm-up.

“For example, at Silverstone, Fabio did 24 laps on a set of race tyres on Saturday and Áleix [Espargaro, who finished third] did 22 laps on a set of his race tyres. So the riders who did that were able to anticipate how the tyres would behave in the race and finish on the podium.

Heating and reheating tyres is another consideration. This affects the molecular structure of the rubber, changing the tyre’s behaviour, so it’s avoided whenever possible. That’s why most riders do the pre-race sighting lap on one set of tyres, then change to their race tyres on the grid.

“If riders use their race tyres on the sighting lap the tyres will get hot, then cool down when they return to the grid. They then get heated again with the [electric] tyre blankets but the tyres will never reach their optimum temperature before the start, which is why teams keep their race tyres in their blankets until the last moment. Of course, this also saves one lap on the tyres.”

MotoGP tyre blankets heat the tyres to 90 degrees and this is a specified temperature, which is monitored by Michelin.

Next year Michelin plans to widen the operating window of its tyres, so that riders will suffer less from falling outside that window.

“We have already spoken with the riders and Dorna, so we are thinking to change the allocation for 2022. Now we have many extreme solutions to get best the performance. So our idea is to keep the compounds with a wider range of working temperature and remove the more extreme compounds from the allocation. So we won’t just look at peak performance, but at an easier and wider working range.”

Michelin’s much-anticipated new front slick, which the company started testing a couple of years ago, has been delayed by the pandemic and other factors, so it won’t arrive until 2024. Michelin hope the tyre will be less sensitive to temperature and pressure increases when riders are following other bikes.