Regular readers of this blog will know I’m a big fan of MotoGP’s annual crash report. Not because I’m ghoulish, but because the crash statistics tell you more than just who’s crashed the most.

The numbers can indicate more than pain and suffering – they can tell you who is having the roughest time with their motorcycle and what’s happening with general development of bikes, tyres and riding technique.

It’s no great surprise that the MotoGP rider who crashed the most during 2019 was Johann Zarco, who fell on 17 occasions.

Zarco crashed an average of once a weekend when he was riding the factory Red Bull KTM, which more than doubled his crash rate of 2018, when he rode a Yamaha YZR-M1. Valentino Rossi experienced a similarly rude awakening when he switched from an easy-riding M1 to Ducati’s fiery Desmosedici – more than doubling his crash rate, from five tumbles in 2010 to 12 in 2011. This is the kind of story that the crash report can tell.

The general MotoGP trend is the opposite to Zarco’s, because the 2019 MotoGP season featured a big decline in crashes. During the first three years of Michelin-spec tyres, there was a peak average of 301 crashes per season, while during 2019 the number dropped to 220, even though there was one more race. What are the reasons for this?

Most MotoGP crashes are front-end falls, because traction control has greatly reduced the number of on-throttle rear-end accidents, but the 27 per cent decrease has nothing to do with front-tyre improvements because Michelin’s front slick remained essentially unchanged from 2018.

Riders reckon the reduction is largely thanks to them adapting their riding technique to suit Michelin’s front slick and the factories further tailoring their bikes to work better with the tyre. Also, Michelin’s 2019 rear slick gave more grip, which helped riders decelerate better, so they were less likely to overload the front.

No doubt this improvement helped world champion Marc Márquez keep with the trend of crashing less. During previous years Márquez and fellow HRC rider Cal Crutchlow were always at the more painful and expensive end of the crashers’ league, but less so last season, when they had 14 and 12 crashes respectively. Compare that to the previous two seasons, when Márquez averaged 25 crashes and Crutchlow 20.

There was another reason for the pair falling less often in 2019, which runs contrary to common sense: they had a worse front-end feeling with the 2019 RC213V than they’d had with previous versions. You would think that this would result in more crashes, right? But no, because motorcycle racing is never that straightforward.

Moto2 followed a similar but slightly less dramatic trend in 2019, from 418 crashes the previous season to 347 tumbles, a reduction of 17 per cent, again despite an extra race. What were the reasons for this?

Many Moto2 riders found they could use softer, grippier front tyres because the larger-capacity Triumph 765 triple offers more torque, which means more negative torque and thus more engine-braking, which gives the front tyre an easier time.

This even helped Sam Lowes, who topped the Moto2 crashing league, with 20 crashes, compared to the 27 falls he had the previous season. The Briton’s crash stats are awe-inspiring: a total of 152 tumbles during his five seasons in Moto2 and one year in MotoGP, an average of 25 per season. Lowes’ career is a testament to his willingness to keep pushing past the limit, to modern track safety and to the amazing protection offered by the latest riding kit.

Or is this all nonsense, another case of lies, damn lies and statistics? Might the overall reduction in MotoGP and Moto2 accidents be something to do with something else, like better weather during 2019? No, because there were more rain-affected weekends in 2019 than in 2018.

And here are the Moto3 crash statistics, flying in the face of the MotoGP and Moto2 stats to prove the point. During 2019 the youngsters in the harum-scarum junior category managed a total of 404 crashes, against 356 in 2018. That’s an average of 21 Moto3 crashes per weekend, which means that something like two-thirds of the grid had an accident at every round. This is what happens when riders are chasing hundredths and thousandths on every lap.

Despite their best efforts, the Moto3 crazies couldn’t overcome the overall MotoGP trend, so last season’s crash total across all three classes was 971, the first time it’s been below a thousand since 2015.

In MotoGP, Zarco was followed by Jack Miller on 15 falls. The crashes, of which only three were in races, were worth it because the young Aussie had his best-ever season, pushing harder than ever, taking five podiums and almost doubling his best points total.

Next was rookie Pecco Bagnaia on 14, same as Márquez. Much was expected of the reigning Moto2 champ, but he struggled with Michelin’s front slick, suffering numerous front-end crashes. Karel Abraham, Crutchlow and rookie Joan Mir were next on 12 crashes each. Rounding out the top ten were Aprilia team-mates Aleix Espargaro and Andrea Iannone, on ten each, and Miguel Oliveira and Danilo Petrucci, on nine.

In Moto2, Lowes was followed by rookie Marco Bezzecchi, who crashed his hard-to-handle KTM on 18 occasions, Alex Márquez’s team-mate Xavi Vierge, on 17, and American Joe Roberts, another KTM rider, on 16.

Tom Booth-Amos kept the flag flying alongside Lowes, by topping the Moto3 crash stats and the overall MotoGP/Moto2/Moto3 stats on 22 falls, closely followed by Can Öncü on 21, Kaito Toba on 19 and Kazuki Masaki on 18.

Le Mans had the most crashes of the season, with 90 tumbles during the three days, two of which were rain-affected. Next were Catalunya and Phillip Island, with 73 crashes each. Aragon was the least painful weekend of the year, with just 15 accidents, the least since Qatar in 2009, where there were only 13 fallers. 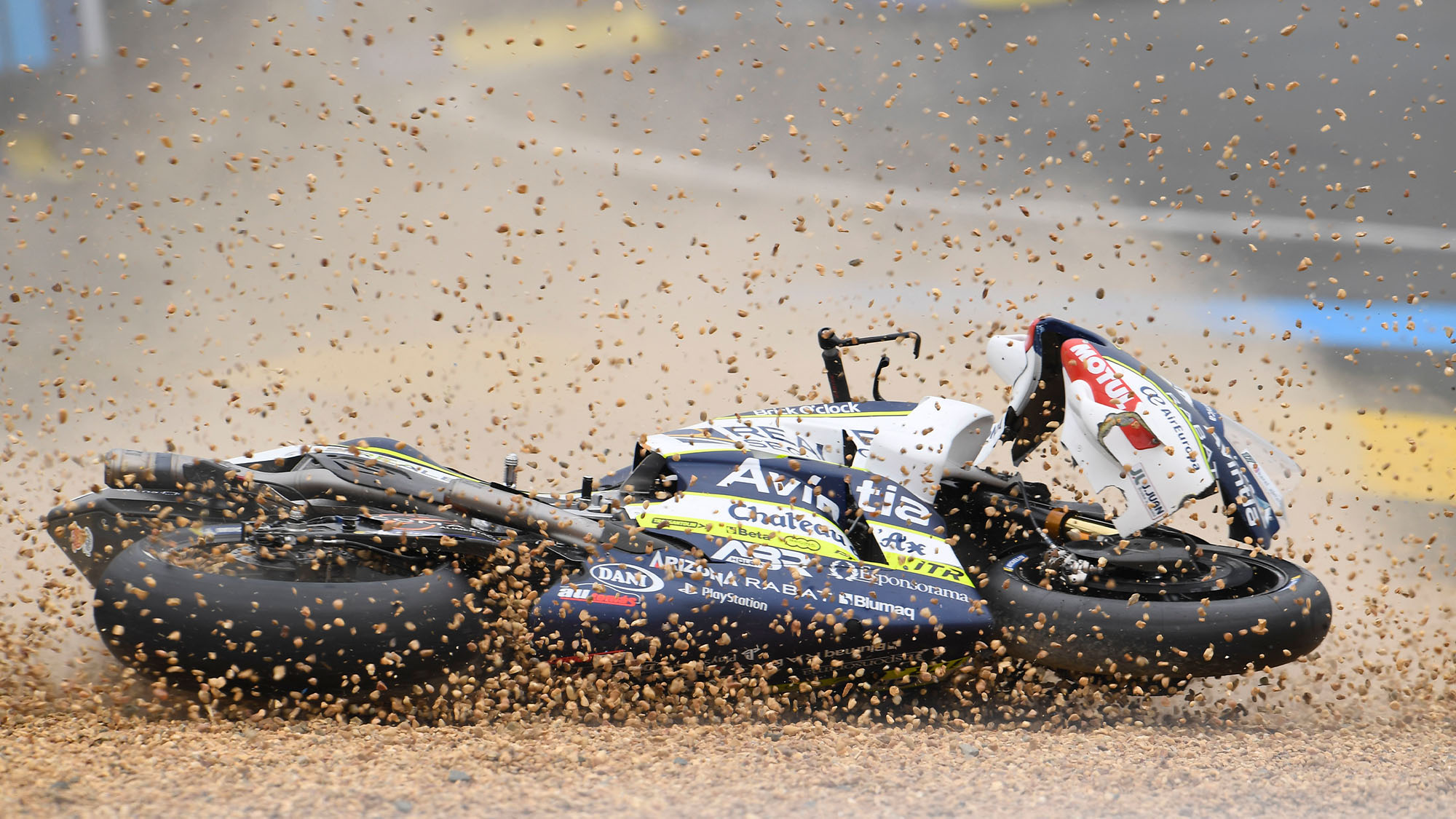 MotoGP’s nastiest corner in 2019 was Turn Three at Le Mans, the left of the first esses, where the left side of the front tyre is often below optimum temperature. The same goes for the right side of the tyres at Phillip Island’s Turn Four, the next nastiest corner, with 27 crashes. Third was Catalunya’s Turn Ten, with 20 crashes. This is where Jorge Lorenzo took out himself, Andrea Dovizioso, Maverick Viñales and Valentino Rossi on the second lap of the MotoGP race.

Sadly, there are no statistics available to tell us the financial cost of all these accidents. We can only assume that the total repair bill is in the many millions.

Of course, the financial cost is less important than the physical cost, which is why MotoGP started collecting crash statistics in the 1990s, to allow officials to examine racetrack safety more scientifically. Crash reports from each world championship round detail all injuries noted on the day.

During the course of 19 MotoGP, Moto2 and Moto3 events there was a total of 28 broken bones, the most serious of which were the fractured vertebrae suffered by Lorenzo and Moto2 rider Mattia Pasini. Stricter monitoring of head injuries resulted in nine riders being ruled unfit due to head concussions, against the three similarly diagnosed during 2018.

And we must not forget 20-year-old Indonesian rider Afridza Munandar who lost his life during an Asia Talent Cup race at last month’s Malaysian Grand Prix. Support races are not included in the MotoGP’s official crash report, but Munandar did die during a MotoGP weekend.

Special thanks to MotoGP media manager Friné Velilla and the MotoGP medical and timekeeping teams for the compilation of the 2019 MotoGP crash report.