A smart phone is a small box of electronics that replaces any number of physical and mechanical gadgets. It takes the place of a camera, a videorecorder, an alarm clock, a typewriter, a compass, a tape recorder, a radio and so on. The best smart phones are so clever that you’d need the back seat of your car to carry around all the bits and pieces they’ve made obsolete.

Ducati’s Desmosedici GP20 works very cleverly in the opposite direction. The machine features a number of mechanical gadgets that take the place of the little black boxes of tailormade electronics that Dorna regulated into history at the end of the 2015 MotoGP season.

The spec Magneti Marelli ECU, introduced in 2016, features lower-tech anti-wheelie, launch-control, engine-braking and traction-control programs, which made MotoGP bikes much more of a handful.

Ducati’s Gigi Dall’Igna was the engineer who realised that the best way to allow his riders to regain some of their 2015 speed was to think backwards, not forwards.

First came anti-wheelie aerodynamics, designed to do the job of the anti-wheelie program. Anti-wheelie works via sensors: when the front forks top out and front-wheel speed slows (because the wheel is in the air) the program reduces torque delivery to the rear wheel.

But the Dorna software is so basic that it reduces torque too aggressively, so riders are better off using their own throttle-control abilities to control wheelies. Downforce aero helps by offering consistent assistance in keeping the front wheel down.

Next came the holeshot device, used by Ducati since the last few races of 2018. This contraption lowers the bike by pumping down the rear suspension to reduce wheelies when riders accelerate away from the grid. The holeshot-device assists the Dorna launch-control program – which is basically a start-only version of the anti-wheelie program. Once again, electronics have been replaced by the combination of a mechanical gadget and rider skill. 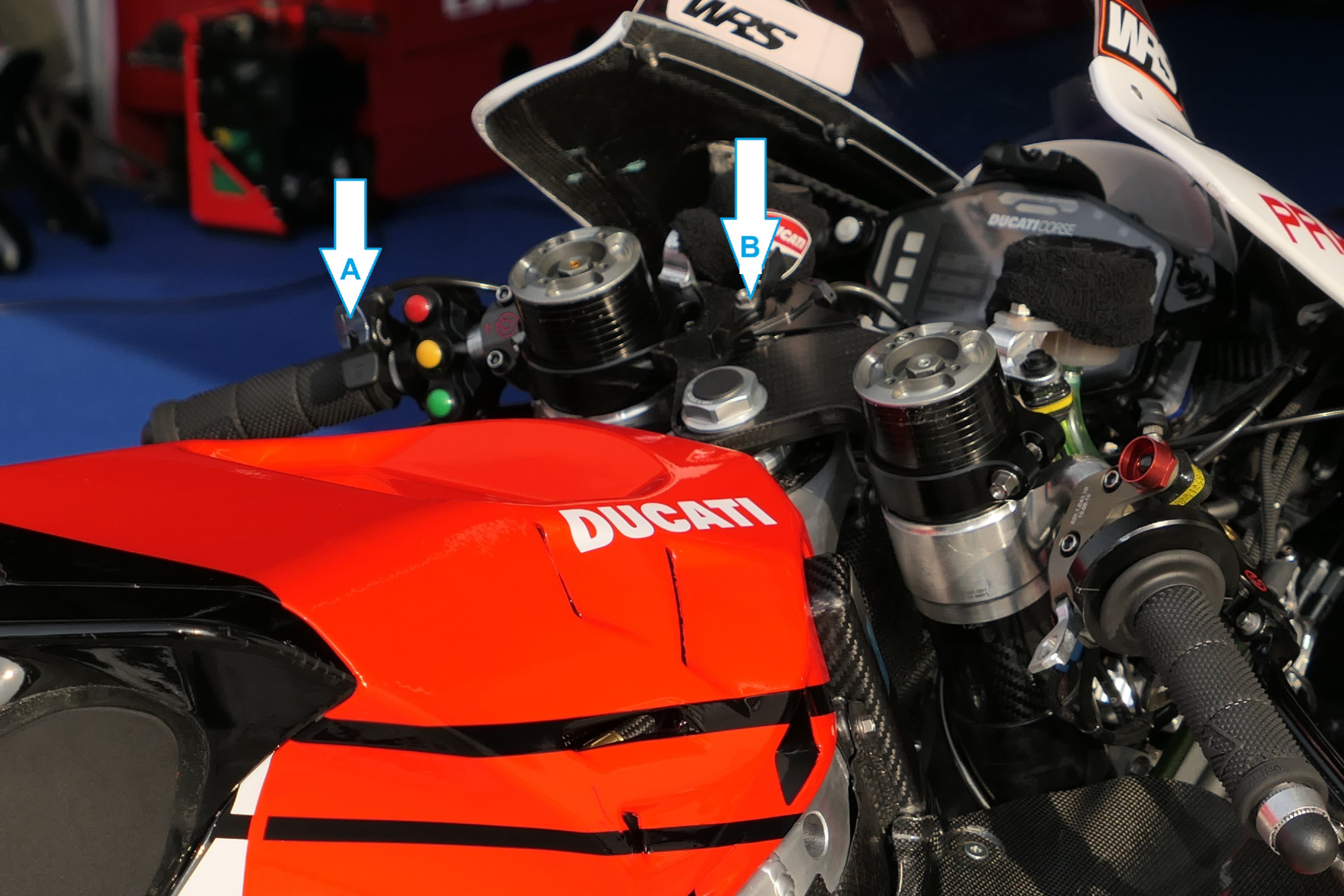 Ducati’s GP20: switch A controls the shapeshifter, switch B activates the holeshot device

Electronically adjusted suspension isn’t allowed in MotoGP, so the holeshot device is engaged via a kind of wingnut switch on the upper triple clamp, which activates the shock via cable and hydraulics. This is cutting-edge Heath Robinson technology.

At the start of last season Ducati introduced its swinglet (swingarm winglet). The swinglet does two jobs. First, it increases rear downforce to keep the rear tyre in contact with the asphalt at higher speeds during acceleration and during braking. Second, it cools the tyre. These actions take up some of the slack created by the lower-tech engine-braking control and traction-control programs.

Tyre-cooling is also vital because the spec traction control struggles to control wheelspin, so the rear tyre can overheat and degrade too quickly. 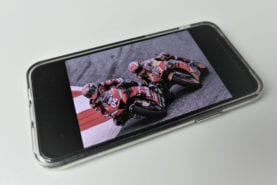 Why Ducati’s GP20 is the opposite of a smart phone

A smart phone is a small box of electronics that replaces any number of physical and mechanical gadgets. It takes the place of a camera, a videorecorder, an alarm clock,…

Ducati’s latest gadget is the shapeshifter, introduced during the latter stages of last season. The shapeshifter works like the holeshot device, by lowering the bike by compressing the rear shock to reduce wheelies, further assisting the anti-wheelie program.

As speed increases so does drag, which hurts top speed. By dropping the rear of the motorcycle the shapeshifter flattens the aero angle, reducing drag to regain top speed. Racing cars have been doing this for years.

Dall’Igna and his engineers have come up with all these gadgets because they’ve been very good at discovering gaps in the MotoGP rulebook, just like Adrian Newey and others in Formula 1. This requires a different way of reading the rules – instead of looking at what’s on the page you look out for what isn’t on the page.

Some of Dall’Igna’s innovations have caused controversy. There was a huge fight over aerodynamics and then protests from rival manufacturers against the swinglet.

Four years ago I was one of many who thought Ducati’s radical wings should be banned. This was after the 2016 Sepang tests, when Ducati rocked up with its six-winged GP16, which looked like a 200mph cheese slicer. 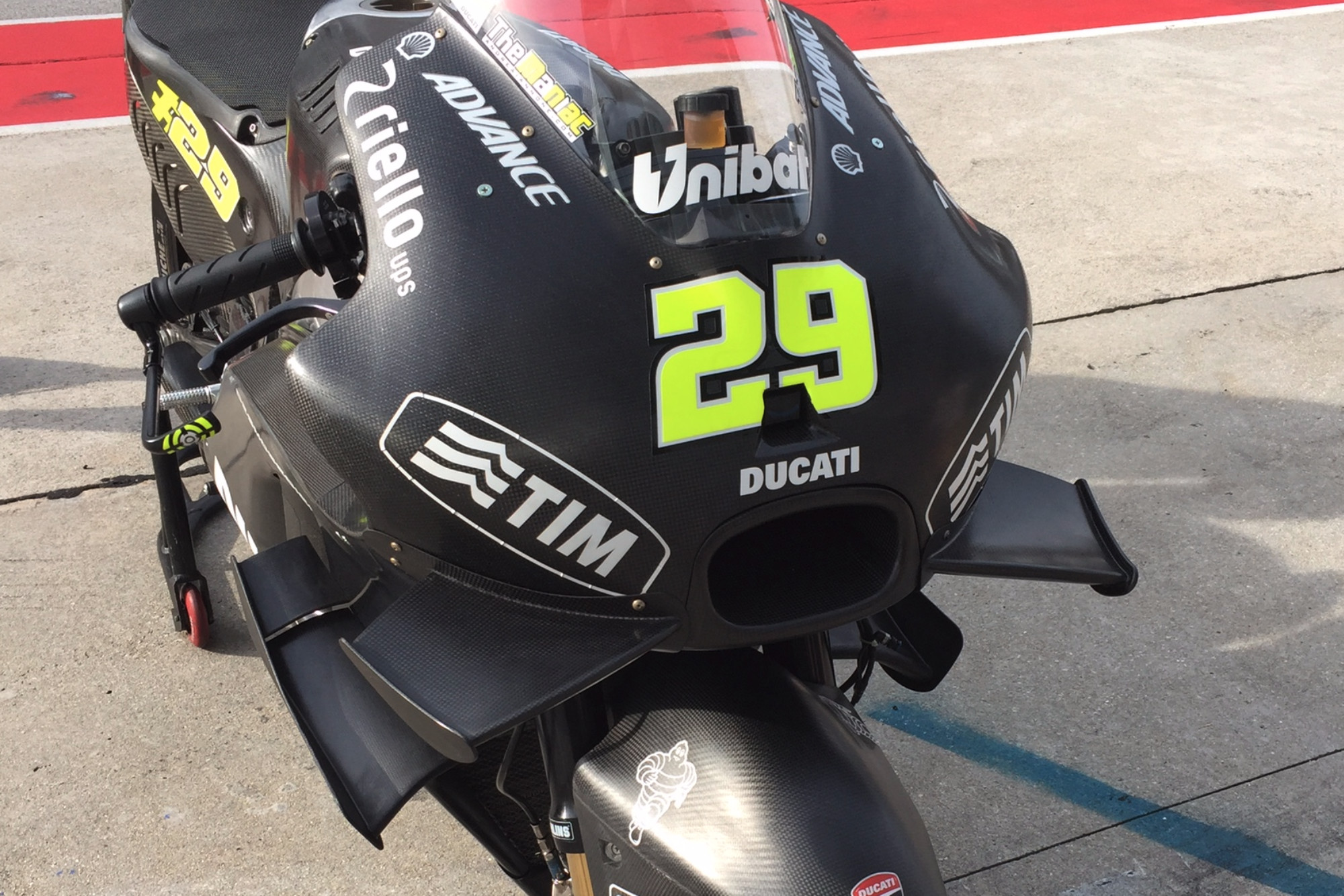 Wings weren’t banned, but MotoGP’s aero regs were rewritten to outlaw the most outlandish designs, which protruded too far and left dirty air behind them, which gave riders trying to catch a tow some scary high-speed instability issues.

Now MotoGP aero is gradually becoming more integrated into the bodywork, which is the right way to go.

MotoGP aero also offer an important safety improvement. There is nowhere more dangerous to have an accident than at the end of a fast straight, where MotoGP bikes usually exceed 200mph and sometimes 220mph, with the front wheel still lifting off the road.

Obviously this isn’t safe. Also, if the front tyre isn’t firmly on the asphalt when the rider hits the brakes the tyre will lock, most likely with disastrous consequences. The downforce created by aerodynamic add-ons helps keep the front tyre on the asphalt, thereby minimising the danger of accidents at high speed.

Most manufacturers now have, or will soon have, holeshot devices on their MotoGP bikes. The consequences of just one failure could be horrific. Jack Miller’s holeshot device didn’t disengage at the first corner of last year’s British GP – because Turn One at Silverstone doesn’t require a lot of braking from the start – which put the Aussie in an awkward situation.

“I couldn’t get my holeshot device to pop back up, so I went through the first three turns like a chopper,” said Miller. “I was trying to get it to pop up and people were going around me, left, right and centre. It was quite scary towards Turn Three! Basically I had to do a stoppie at Turn Four to free it up. It wasn’t ideal.”

This is why some rival engineers believe that holeshot devices should be banned. Not now, but soon.

“What is the point of holeshot devices, once everyone’s got them?” one anonymous engineer told me recently. “It’s just another thing to go wrong, which has no real use and could cause a very big problem at the first corner. They shouldn’t be banned right now, because that would be unfair to Ducati. But once all six factories have got them they should definitely be banned.”