No need to guess what unites these four GPs – wet weather, of course – but Le Mans has a special place in MotoGP history as the venue that consistently claims the most victims.

And rain isn’t always to blame. In 2018 the sun shone all weekend at Le Mans and there were 109 crashes – MotoGP’s all-time dry-weather crash record.

So what’s up with Le Mans? Why do so many riders lose control around the 2.6-mile circuit and its 14 corners, whether it’s wet or dry?

According to the riders (and their opinions matter the most), it’s a combination of factors.

“You have a lot of grip from the asphalt, but when the tyre starts to slide, it slides very aggressively,” said Valentino Rossi in 2018, trying to explain why so many riders succumbed in the dry. 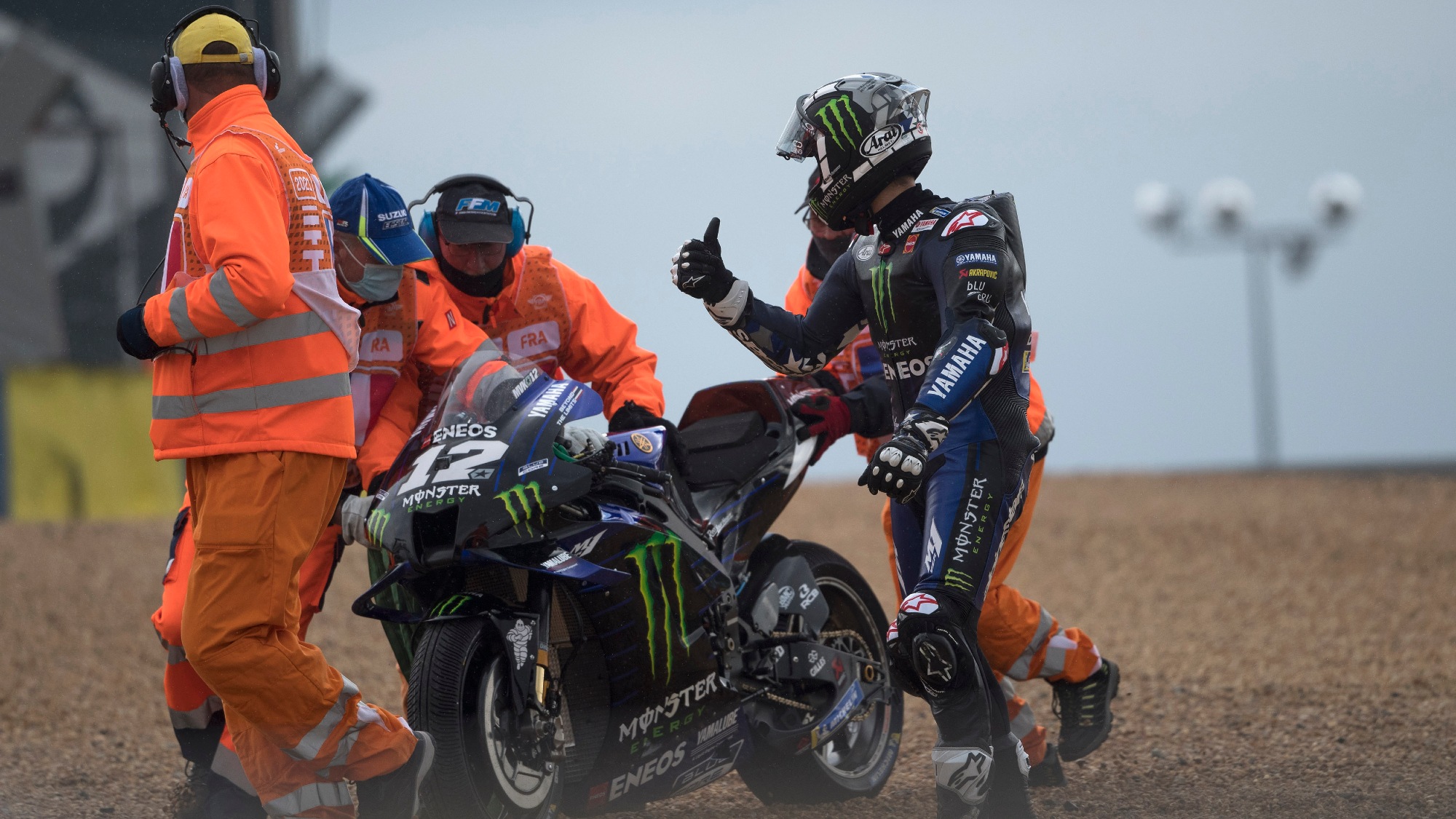 In the dry it’s just as easy to lose the rear, in a big way.

In 2018 Pol Espargaró, Cal Crutchlow, Bradley Smith and others lost control on corner exits and suffered huge highsides, because they were running reduced traction control to get their bikes turned more quickly through the tight corners.

“The Michelin rear has so much grip that we all try to run not so much traction control in the lower rpm range, to get the bike to pivot naturally,” explained Smith at the time. “We are all trying to get the bike turned as quick as possible to get up the straights, so the problem is exaggerated here.”

“There are a lot of corners here where riders are using low rpm and when the rpm is low the guys can’t feel the rear step out so much,” he said. “When it’s high rpm the rear tyre is more connected to the throttle. There’s good grip here, so the guys feel they can carry good corner speed, but the rpm is so low they don’t feel the tyre go so early in corner. Also, the safety margin of the control software is less – the programme’s reaction time and so on. The key is to understand all that. When Pol had his highside he didn’t feel it and by the time he realised, he closed the throttle and the bike stepped back and threw him.” 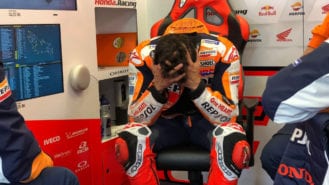 Le Mans’ own accident black spot is the Turn Three left-hander, where riders can arrive with the left side of the tyres below operating temperature, so the tyres don’t work.

When a tyre is too cold the rubber can’t do the job it was designed for, so the rider gets zero warning of impending disaster. This explains why so many riders were angry last weekend, because when luck rather than skill becomes the determining factor in whether you crash or not then motorcycle racing becomes a different kind of sport.

And it’s the same in the rain. “You find the limit when you’re on the ground,” said Maverick Viñales after sliding off within 50 metres of leaving pit lane on Friday morning.

The layout is also to blame. Le Mans is a scratchy kind of racetrack, where you have to take plenty of risks to do the lap time. And many of the corners are slow and tight, so riders enter hard on the brakes, trying to turn the bike at the same time, so it’s easy to ask too much of the front tyre, especially with so little feedback from the asphalt.

Last weekend there were 35 fallers at Turn Three alone, and ten of those were in the Moto3 FP1 session! Three years ago when it was dry but windy – which cooled the tyres more than usual – there were 17 crashes at the corner.

The super-long pit lane is also to blame for Le Mans’ grim record, because pre-warmed tyres cool down too much by the time riders reach the circuit, so the first few laps will be treacherous as they try to bring the tyres back up to temperature. This is one reason why several riders, including Viñales in practice and Álex Rins in the race, crashed as soon as they left pit lane. 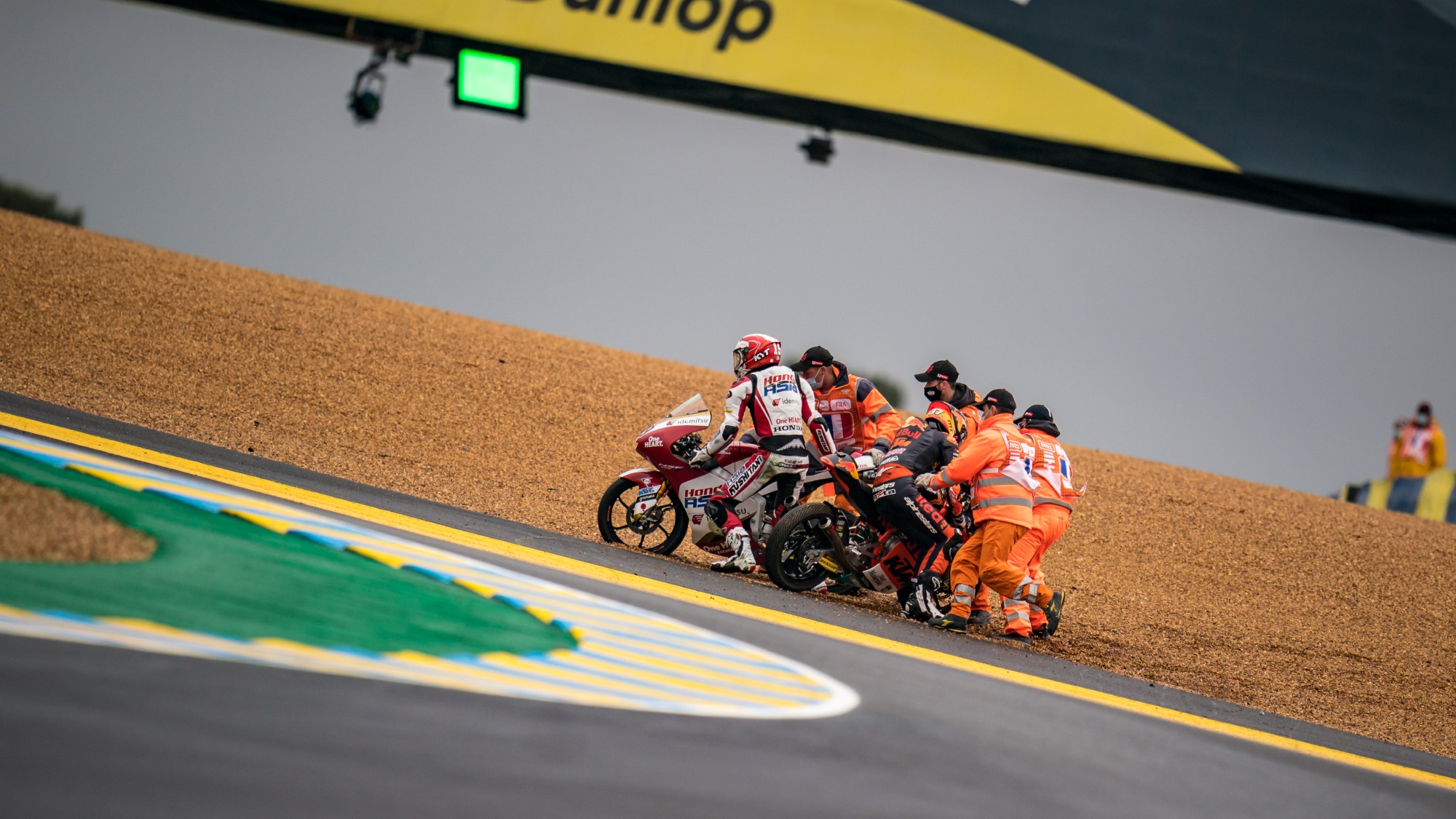 Last weekend’s constantly changing conditions only made things worse, with riders sometimes caught out by downpours while running slicks. World champion Joan Mir was one of them – in the race he crashed on slicks before he had made it back to pit lane to swap to his rain bike.

“When it’s like this it’s very scary,” said Rossi on Saturday. “We arrive very fast and maybe the track is dry but then you arrive in the corner and it’s wet, so it’s very dangerous and you have to be lucky to slow down in time.”

Of course it’s not the number of crashes that really matters, unless you are picking up the bill to fix the bikes. What matters the most is injuries. Le Mans is mostly safe, but this year caused two broken bones. Italian Moto2 rider Yari Montella broke a wrist at Chemin aux Boeufs in FP1 and Japanese teenager Yuki Kunii broke a collarbone in Moto3 qualifying.

Older members of the paddock suggest an easy solution to the problem of Le Mans: move the French GP to Circuit Paul Ricard, situated high on a plateau above France’s sun-blessed Cote d’Azur. Ricard hosted the French GP on and off during the 1970s, 1980s and 1980s. The venue was a favourite with fans and journalists, largely because the circuit was only a 20-minute drive to a seaside dinner of moules frite and a glass of Bandol rosé.

Sadly, there’s one overriding problem with Ricard – it doesn’t attract as big a crowd as Le Mans, which is only a two-hour ride from Paris.

French MotoGP promoter Claude Michy – who has worked hard to make his event hugely popular with French fans – says he could move Le Mans to a warmer time of year, which may help. A bit.