Yesterday’s French Grand Prix could’ve been a fairy-tale for Marc Márquez but it wasn’t.

Márquez knew he could’ve won yesterday’s race and was angry with himself for failing to do so. The Le Mans rain and the bike swap could hardly have been scripted better for the six-times MotoGP king, because he excels in sketchy conditions and because the reduced physical demands of racing on a wet track largely cancels out the issue of his weak right arm.

In his third race following a nine-month layoff, Márquez seized the lead immediately after the bike swap and built a 1.5-second advantage in just two laps. Perhaps he was too keen, although he didn’t think so.

“I knew that if I was patient – and I thought I was inside the limit – during the first three or four laps [after the bike swap] it would be a good race for me,” he said. “But anyway I crashed, where I didn’t expect and where I wasn’t pushing a lot. But this can happen – there was quite a lot of risk in these conditions and there were many crashes.”

Márquez lost the rear entering Turn 14 at the end of lap eight and was high-sided off his Honda RC213V. The crash was a dead-ringer for the accidents that he and team-mate Pol Espargaró had during the soaking morning warm-up session: off-throttle, corner entry.

“In the dry I feel very comfortable on the bike and have good speed, but in wet conditions I have no feeling from the rear,” he said. “This is especially from braking to turn-in. On the exit our grip is good. I had many moments like Marc during the race, so Honda needs to understand what’s happening in the wet, because we need to find a solution for the future.”

Most likely it’s a combination of many things: suspension set-up, bike balance, centre of gravity, engine-braking software and so on. What doesn’t quite add up is that Alex Márquez had a storming ride to second in last year’s rain-lashed Le Mans race. 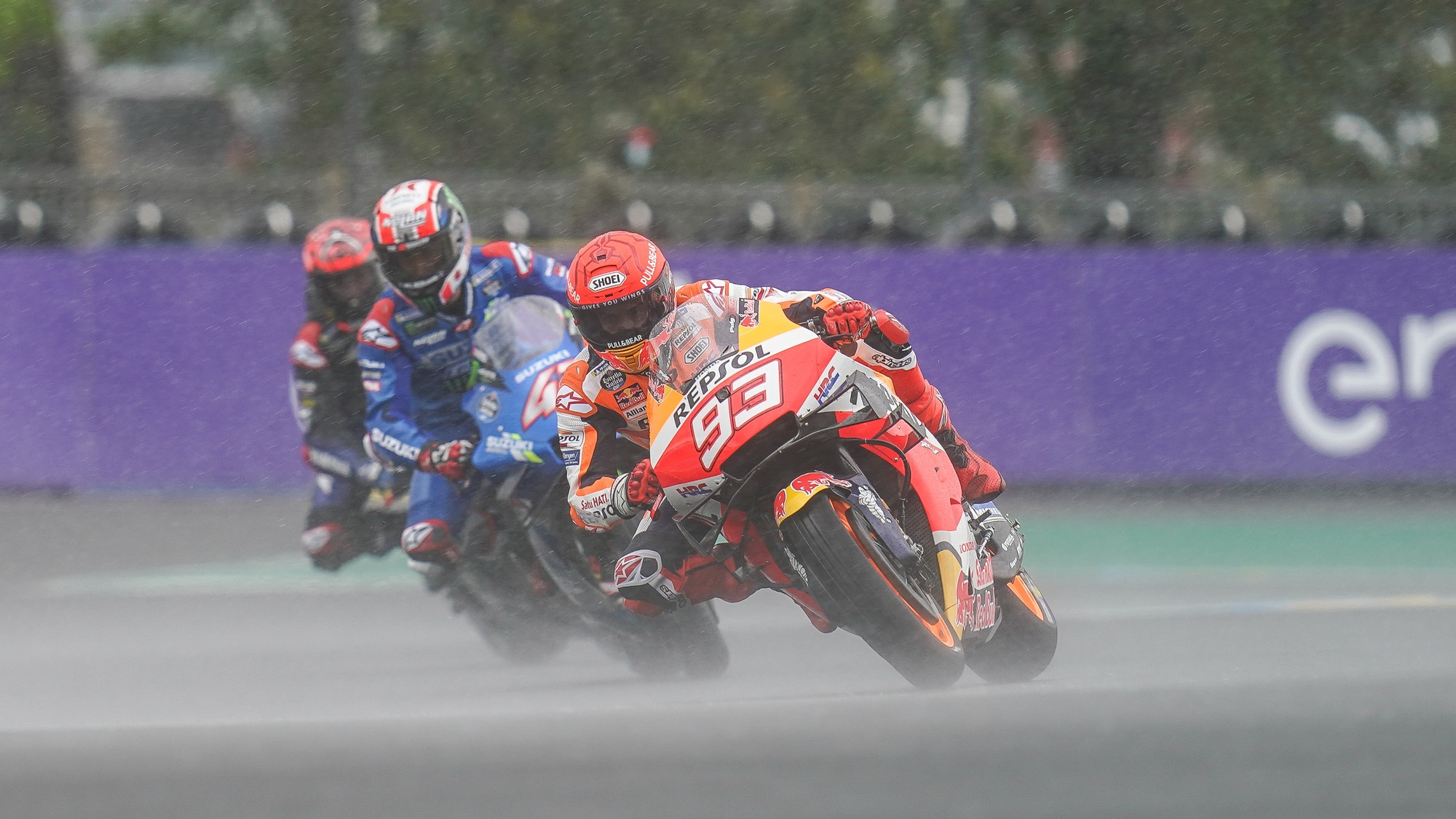 Importantly Nakagami, the younger Márquez and eight-placed Pol Espargaró all chose Michelin’s soft rear rain tyre, which gave them more grip and feel when the track was very wet. The older Márquez went for the medium, hoping to gain an advantage as the track dried, but the tyre proved too hard to handle when the track was soaking.

Big brother was at least happy that he had been fast because there’s only one thing worse than being fast and crashing and that’s being slow and crashing.

“The good thing is that I took the bike again [after the first crash] and I was the fastest guy on the track, but I’m angry with myself about the second crash wasn’t necessary,” he added. “I was thinking more about other things and I didn’t know the front riders were slower than me. I was thinking about my arm, my position on the bike and I had just informed my team that I was coming into the box to change to slicks because the track was ready, I believed.”

A second bike swap to slicks would’ve been a typically audacious Márquez move and suggests he has lost neither his never-say-die attitude and his instinct to roll the dice.

At that stage of the race there were nine laps left and Márquez was 42 seconds behind leader Jack Miller. The bike swap would’ve cost him another 40 seconds, so he needed to make nine seconds a lap on Miller to catch him.

Could he have done it? We will never know but it would’ve been great to watch. If Márquez had been able to make the slicks work for him he perhaps he would’ve been able to get close to the 1min 34sec, a second slower than the fastest riders before the rain came. During the final ten laps Miller averaged 1min 42sec and 1min 43sec, so… But it’s all ifs and buts.

Márquez still has a long way to go in his rehabilitation because some of the muscles in his right arm and shoulder are still very weak. And not only because of last July’s crash. 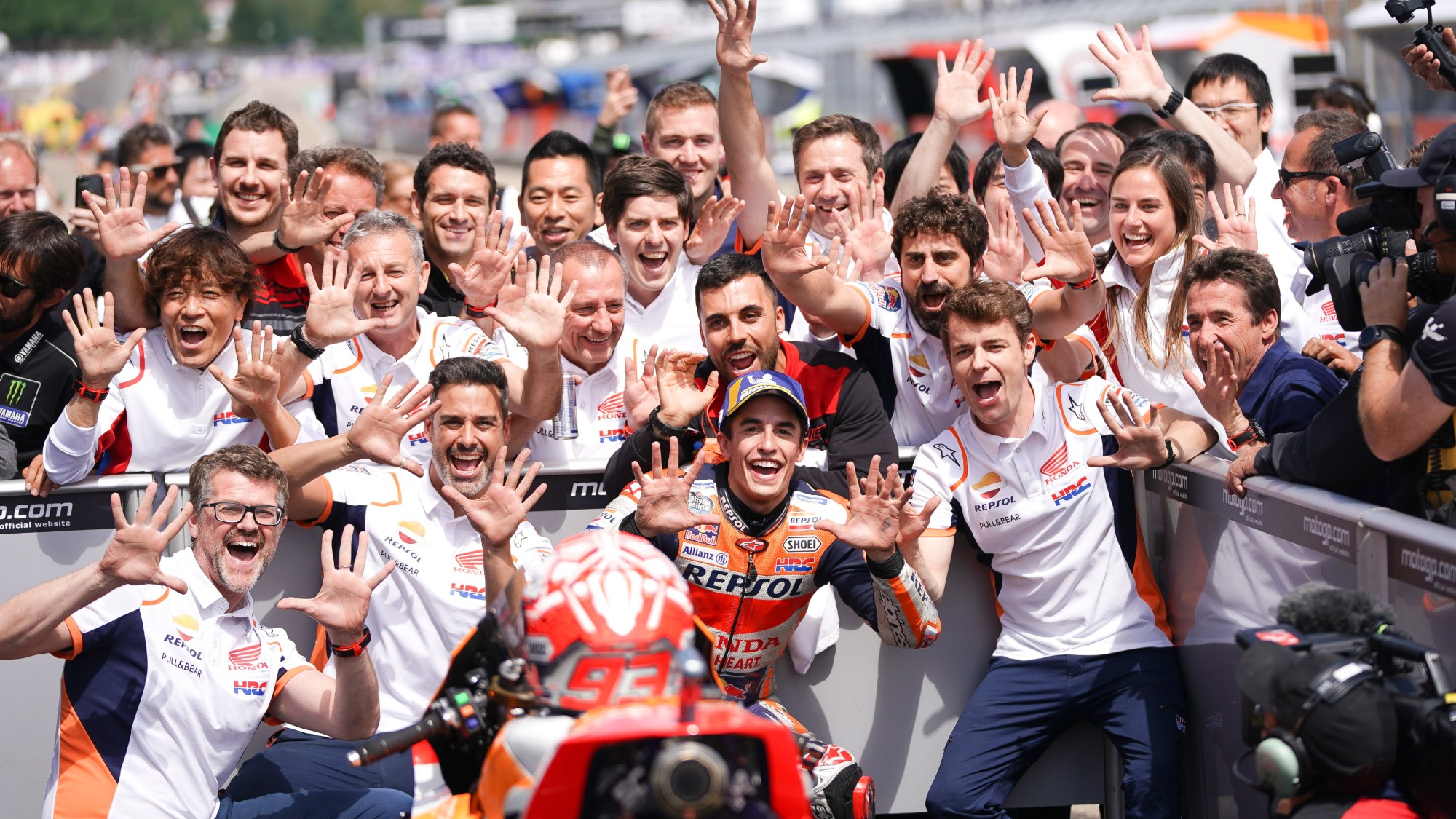 “In the gym we see that some of my arm muscles are nearly 80%, but some are 50%, so it depends on what movements I am making. The shoulder is where I’m struggling more, especially the back of the shoulder. That’s where we are working the most, trying to improve.

“Two winters ago I had an operation on the right shoulder, which isn’t 100% recovered from the operation, because there was some damage to some nerves in the shoulder. All these things made rehabilitation more difficult. 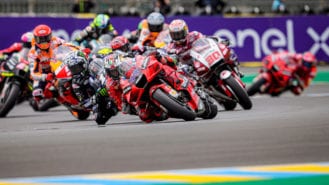 Márquez doesn’t know when he will be back to 100% fitness – maybe it won’t even happen this year.

However, he is already strong in left-handers, because there’s nothing wrong with that side of his body. And lefts have always been his favourite, which is why he is mostly unbeatable at anti-clockwise circuits. Thus anti-clockwise tracks are currently more attractive than ever for him.

“I’m struggling only in a few corners here in Le Mans, I’m not struggling all around the circuit,” he said on Saturday evening. “In left corners I feel really good, I feel normal, but then the problem is like the reverse – I feel good in the lefts, so I’m trying to make all the lap time there, so I push too much and then there’s the limit. At Jerez I crashed twice in left corners and today I crashed in a left corner [Turn Nine during FP4].”

The first anti-clockwise event in this year’s championship is next month’s German GP at Sachsenring, where he’s not been beaten since 2009. Most likely that is when we will see the true measure of the 2021 version of Márquez.

Before that, he has back-to-back races at hugely physical Mugello and then Barcelona. “We already know that I will struggle a lot with two races in a row,” he said at the weekend.