Most road riders use a lot more front brake, while MotoGP riders use the rear brake much more. This is just one example of how the art and science of riding a MotoGP bike has very little to do with everyday motorcycling.

The rear brake is now one of the most important tools on a MotoGP machine, which is why riders use it through 70% of the lap, while they use the front brake half as much (but with a lot more braking force and stopping power).

MotoGP riders use the rear brake to help stop the bike, to turn the bike, to adjust its attitude, to stabilise the bike and reduce wheelies during acceleration.

“The rear brake on a MotoGP bike is important everywhere,” says Tech 3 KTM rider Danilo Petrucci. “This is why I have a thumb brake and a foot brake, so I can use the rear brake in all circumstances.

“When I rode Superstock 600 I could’ve removed the rear brake and still been fast, but when I went to 1000 Superstock I learned it was a tool you really, really need to use. In MotoGP there aren’t any tracks where you use the rear brake more or less, because you use it in most situations at every track. 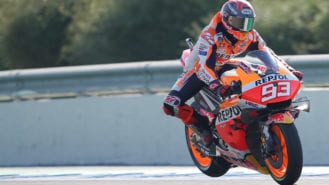 “Sometimes the engineers tell you to use it less because there’s the matter of fuel consumption, but it does so much to stabilise the bike. I’m nearly always on the rear brake, into and out of corners. Really the only time I don’t use it is when I’m in fourth, fifth and sixth gears.”

The rear brake has become more important in the Michelin era because Michelin’s front slick needs help from the rear slick, both to provide extra stopping power and to ensure the front doesn’t get overloaded.

Since 2016 the balance of MotoGP bikes has changed hugely to reflect this, transformed from front-oriented machines to rear oriented-machines.

“With Bridgestones we used more front brake pressure,” Petrucci adds. “During that time we saw a lot of riders lifting the rear tyre off the ground for long periods of time during braking but we don’t see that anymore.”

To explain when and why riders use the rear brake we asked Petrucci to talk us around Le Mans, where ten days ago he finished fifth in the French GP aboard his RC16. Last year the Italian won the race on a Ducati.

Petrucci literally uses the rear brake from the start of the race to the finish at many tracks. The device is an important part of a fast getaway from the grid – to reduce wheelies that would otherwise force him to close the throttle – and on a flying lap at Le Mans, for example, he doesn’t stop using the brake as an anti-wheelie tool until he’s past the finish line. 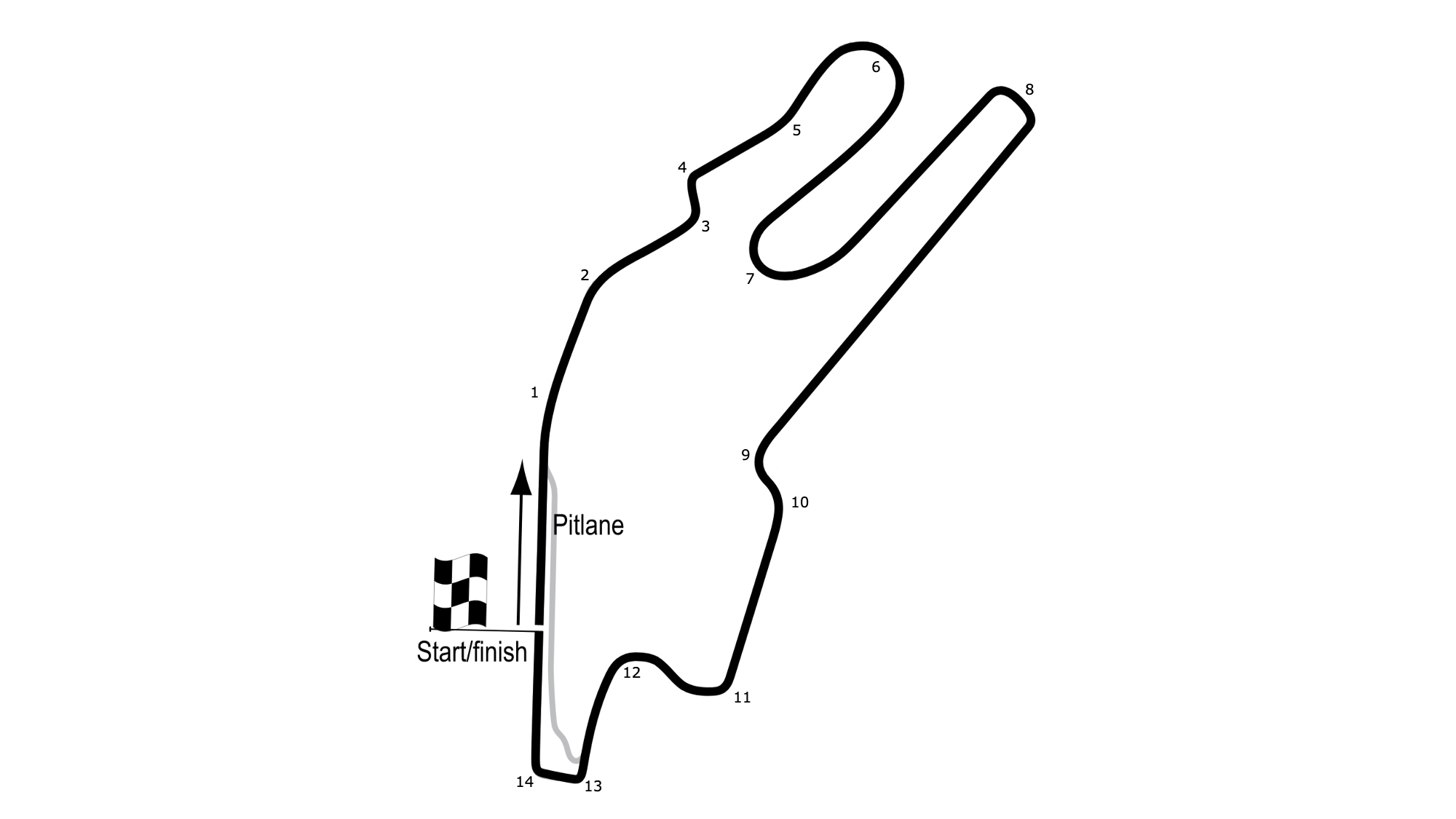 A rear-brake lap of Le Mans

Turns One and Two 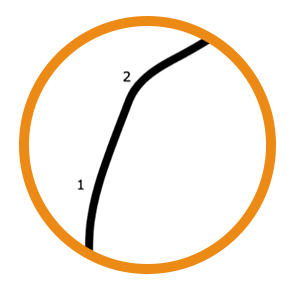 “I use the thumb brake here because I’m quite tall, so it’s difficult for me to stay leaned over while using the foot brake because I catch my right foot on the ground.” 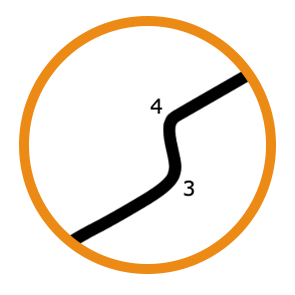 Left-right chicane that catches out so many riders

“I use the thumb brake through Turns One and Two, then when I pick up the bike to brake hard for Turn Three with the front brake I start using the foot rear brake. Using the rear brake in this situation to keep the rear tyre in contact with the ground is one of the keys to unloading the front tyre.

“Most people think you need a lot of weight on the front to turn the bike but in fact the bike starts to turn when you release the brakes.

“Turn Three is quite critical because it’s the first left for a long time, so you really need to be careful, and if you can use the rear brake a lot you don’t need to use too much front brake.

“Next you use the rear brake coming out of Turn Four because MotoGP bikes have a lot of torque, it’s uphill here and you exit in second gear, so the bike wants to wheelie a lot. Also you need to start changing direction into the Turn Five left, so you stabilise the bike and get it pointing in the right direction by really pushing as hard as you can on the rear brake.

“If you like the technology of MotoGP a lot of things are happening in this section. The bike wants to slide and wheelie exiting Turn Four and you need to change direction, so everything is working really hard here – the bike, the rider and the electronics.” 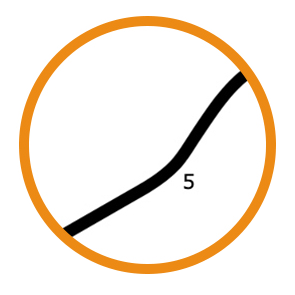 “Turn Five is really nice. You start braking through there and you continue braking when you change direction to the right. If you push too much on the front brake then it’s really difficult to change direction, which is why you need to brake with the rear to keep the bike balanced. Also it’s difficult to trust the front tyre a lot in this downhill part, so this is another reason you need to use the rear brake here.” 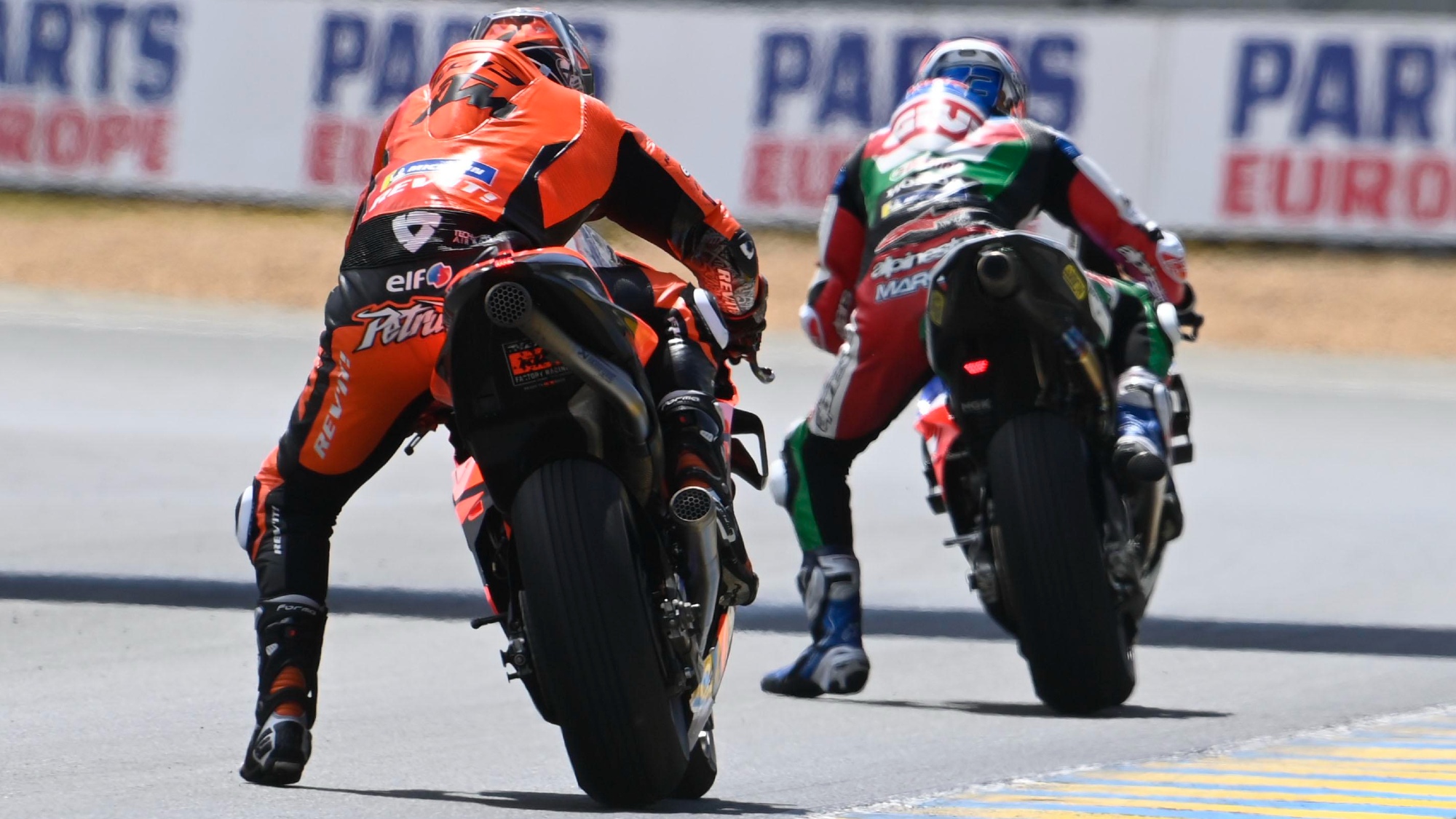 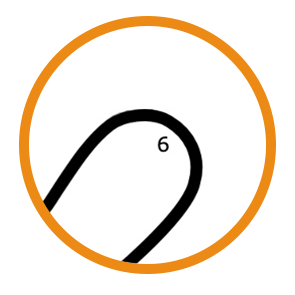 A long medium-speed right that really opens out

“The exit of this corner isn’t tight at all. It opens out a long way, so you don’t pick up the bike so quickly here, so the bike doesn’t wheelie too much, so you don’t need to use so much rear brake.” 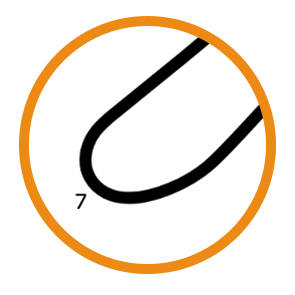 A long, long left with a tricky entry and an open exit

“The entry is downhill, so you start to use the rear brake before the front because using the rear brake when you’re still on the throttle and before you’re using the front brake helps lower the bike at the rear, so the bike doesn’t pitch forward too much and lift the rear. This is more or less the key to all of the track because at Le Mans you do a lot of hard braking, so you need to keep the rear on the ground to help stop the bike with the rear tyre.

“You also push a lot with the rear brake in the middle of the corner, both to unload the front tyre and to help the bike turn better because if the front is too low the bike won’t get out of the corner so well.” 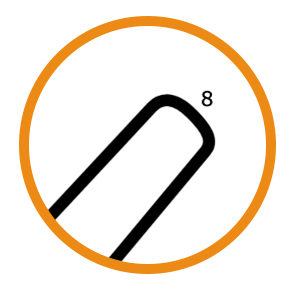 Double right that precedes the back straight, so a fast exit is vital

“Here you use the rear brake to stop and stabilise the bike on the entry and then you use it really, really a lot on the exit, because the exit is uphill and because you pick up the bike quickly. It’s a really difficult point because you are really fighting with the front because even when you are going straight after the corner you still have some lean angle.” 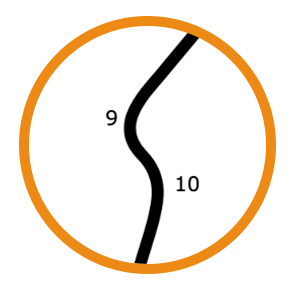 “Turn Nine is a good overtaking opportunity [Petrucci passed Andrea Dovizioso here on his way to his 2020 victory] but you have another chance into the corner after the chicane. If you go through the left of the chicane too fast it’s difficult to change direction into the right, but if you can change direction quickly you can accelerate harder and make a pass into Turn 11.” 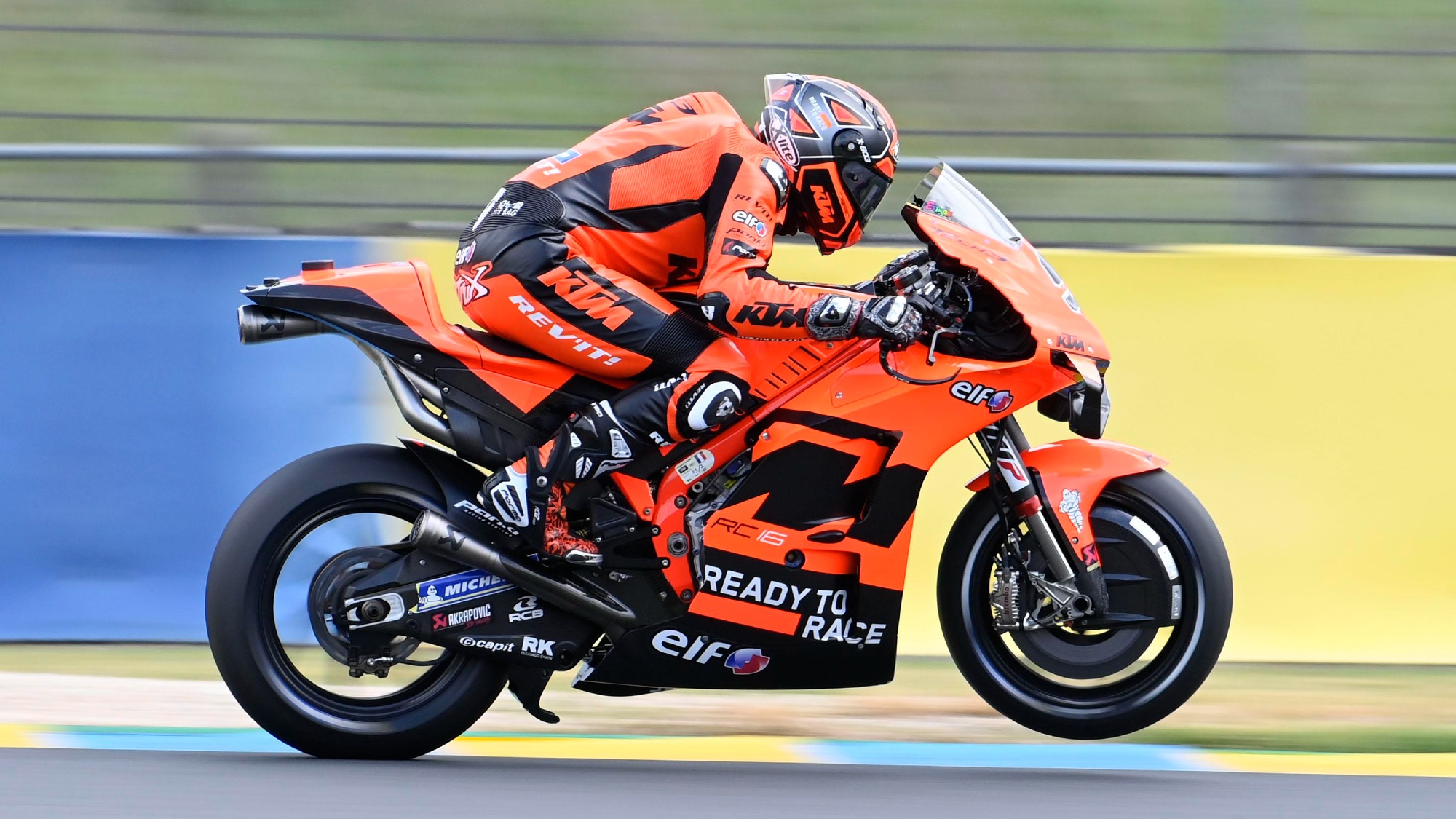 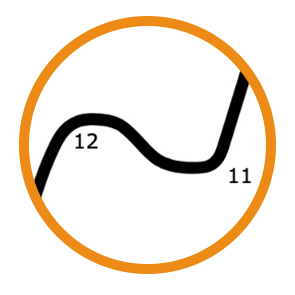 Right-hander with huge positive camber, then a left

“At this point of the track I’m on the rear brake all the time because you’re accelerating out of the chicane and immediately you’re braking for Turn 11. So you use the rear brake to have less wheelie and then to brake.

“The camber is really, really good here, so you can enter with a lot of speed, which helps you attack other riders. There is so much camber that the bike turns by itself, so I don’t use the rear brake through here.”

“There is no big braking or acceleration at the left, so you just use a bit of rear brake in the middle to help lower the rear of the bike and pull up the front.” 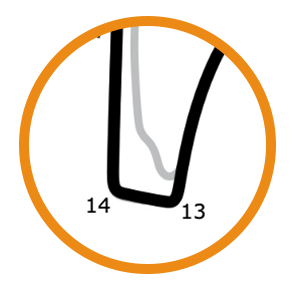 “In the last two corners I only use the rear brake on the exit. You pick up the bike very quickly out of 14, so there’s a big acceleration from second gear, then you are always fighting the wheelie.

“You also fight with your engineers who tell you not to use the brake, but you have to because the bike wants to wheelie so much.

“I don’t stop using the rear brake until I am into fourth gear and over the finish line. From fourth gear the bike wheelies less because less torque gets to the rear tyre, so you can go.

“But we still use the rear brake quite a lot even in sixth gear at Mugello, because over the jump [through the 220mph left kink before Turn One] the bike wants to fly. Even here the rear brake is a big help – you cannot ride without it!

“Many people think MotoGP bikes are easy to ride because of the electronics. But the [spec Magneti Marelli] electronics only work after you make a mistake. So you go a lot faster if you don’t use the electronics, because you can prevent things happening before they happen and control the bike better.

“The bike wants to slide and it wants to wheelie, so if you use too much electronics you won’t be fast because the electronic controls only help you after you make a mistake.

“If you rely totally on the electronics for sure you can open the throttle in the middle of the corner but the bike will be slow, because of all the torque and ignition cuts from the electronics.

“The more you use the electronics the slower you go.”