Danilo Petrucci spends his life dieting like a supermodel, but he’s a big man, so he’s still well over the ideal weight for a MotoGP rider. Except when it’s cold and except when it’s wet.

Which is why the swarthy Italian wore the biggest smile he’s worn all year at Le Mans, while everyone else shivered and cursed.

“I’m enjoying the cold weather a lot, for the tyres,” he said on Saturday afternoon, after taking his first front-row start since Mugello last year (which he also converted into victory).

A few hours earlier FP3 had got underway with track temperature at ten degrees, the coldest anyone could remember.

Petrucci’s weight (he’s happy when he’s under 80 kilos, which is 15 kilos more than world champion Marc Márquez weighs) is bad for his tyres when it’s hot and dry, because extra weight equals extra load, which burns the rubber.

But when the rain comes down, that negative magically transforms itself into a positive, because the extra load he puts into the tyres generates much-needed heat and therefore grip.

That’s one reason Petrucci has always been good in the wet. And that advantage gives him confidence, which multiplies the advantage. Also, he’s a rider who races with his heart and his balls – and you need plenty of both when the rain is lashing down and you’re manhandling a 300-horsepower motorcycle around a racetrack.

Petrucci had one other important factor on his side on Sunday – he rode a Ducati. The Italian factory’s Desmosedici V4 has always been good in the rain. And eagle-eyed observers may have noticed that the top eight finishers at Le Mans all rode V4-powered motorcycles, with a Ducati, a Honda and a KTM on the podium.

How can this be – because surely the harder-to-handle V4s are even more of a handful in low-grip situations? Not necessarily, because a good wet-weather torque map can fix that problem and, anyway, the forces that riders put into the bikes are much reduced in the rain, so the livelier character of a V4 is somewhat damped down.

Perhaps most importantly, riders can’t carry much corner speed when the track is wet, so the best way to ride is in a stop-and-go style.

This is how V4s work at their best, while it doesn’t suit inline-fours so much. V4 riders can use their V-type cornering lines – dive to the apex, turn the bike and drive out – to great effect, especially since it allows them to work more heat into the front tyre during braking and into the rear tyre during acceleration. Meanwhile inline-fours riders find themselves unable to exploit their usual corner-speed advantage. 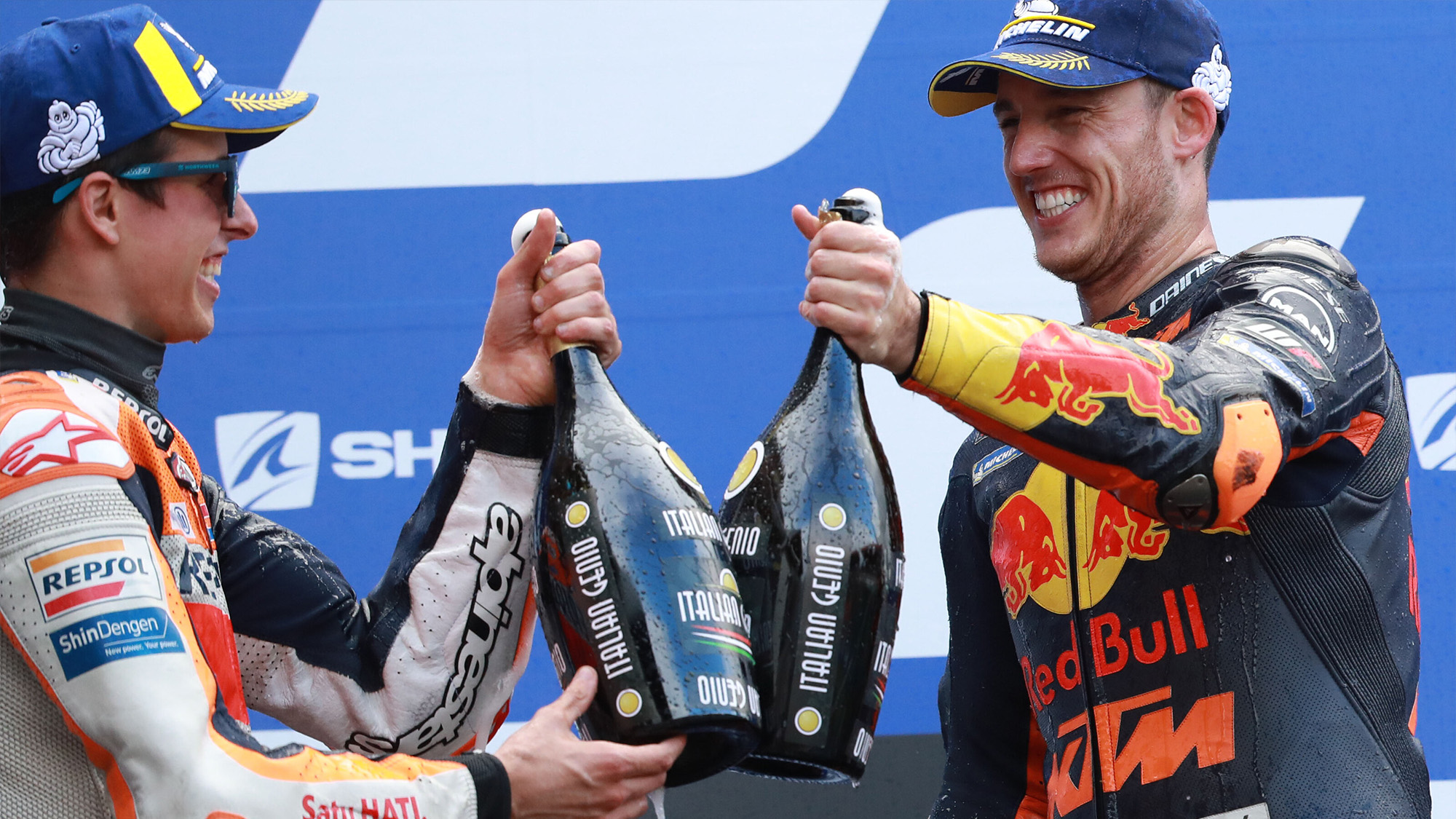 Márquez the younger and Espargaró celebrate second and third

Of course, things are never quite that clear cut in motorcycle racing, so Petrucci had to use the V4’s point-and-squirt advantages but not overuse them.

“At the start of a wet race you never know how the grip will be, so I said, ‘Okay, maybe I will stop a bit more into the corner, to not risk too much, and pick up the bike in acceleration’, but I knew this would use the rear tyre too much,” said Petrucci, the seventh different winner from the first eight races of MotoGP’s weird but wonderful Covid-affected 2020 season. “But then the problem was that I was a bit slower in the corners, so I lost some tenths, so I tried to flow more, but still pick up the bike on the exits.”

Accelerating out of corners like this is great for the lap time and for heating the rear tyre, but it tends to overuse one part of the tyre, which is one reason why Petrucci and others struggled with wheelspin in the closing stages. Petrucci used that age-old trick to cool his tyres – he searched for the damp patches.

“Four or five laps from the end I had no more traction, so I tried to go more inside in the corners, where there was a bit more water, to cool the rear tyre. For sure my bike was really good in braking and acceleration – this was one of the few times that my weight helped me a bit so that I could use it.” 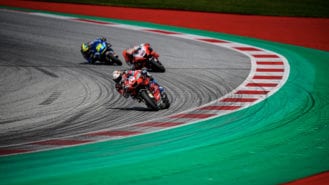 Alex Márquez’s ride to second was a miracle and a big fingers-up to the doubters. A wet podium isn’t a dry podium, but it’s still a podium and a step in the right direction. Márquez sensibly started the race with a well-scrubbed front tyre, which probably helped his lap-one charge from 18th to tenth.

This was the first time the young Spaniard had raced a MotoGP bike in the wet and during the mid-stages he was the fastest rider on track. This brought back memories of his older brother, who also raced a MotoGP bike for the first time in the rain at Le Mans, back in 2013. It took Márquez the elder just eight laps to be faster than all his rivals.

“Now we just need to make this result in the dry,” said Márquez, fully aware that a first dry-weather podium isn’t just around the corner.

Petrucci and Márquez weren’t the only riders who were happy with the rain, which caught everyone by surprise because most forecasts had predicted a dry race.

KTM has made a huge breakthrough this year, scoring its first two MotoGP victories in August. The 2020 RC16’s biggest advantage is its front end, which gives excellent braking and entering performance. Inevitably this demands a lot from the front tyre, so KTM riders usually need a harder front compound than their rivals. 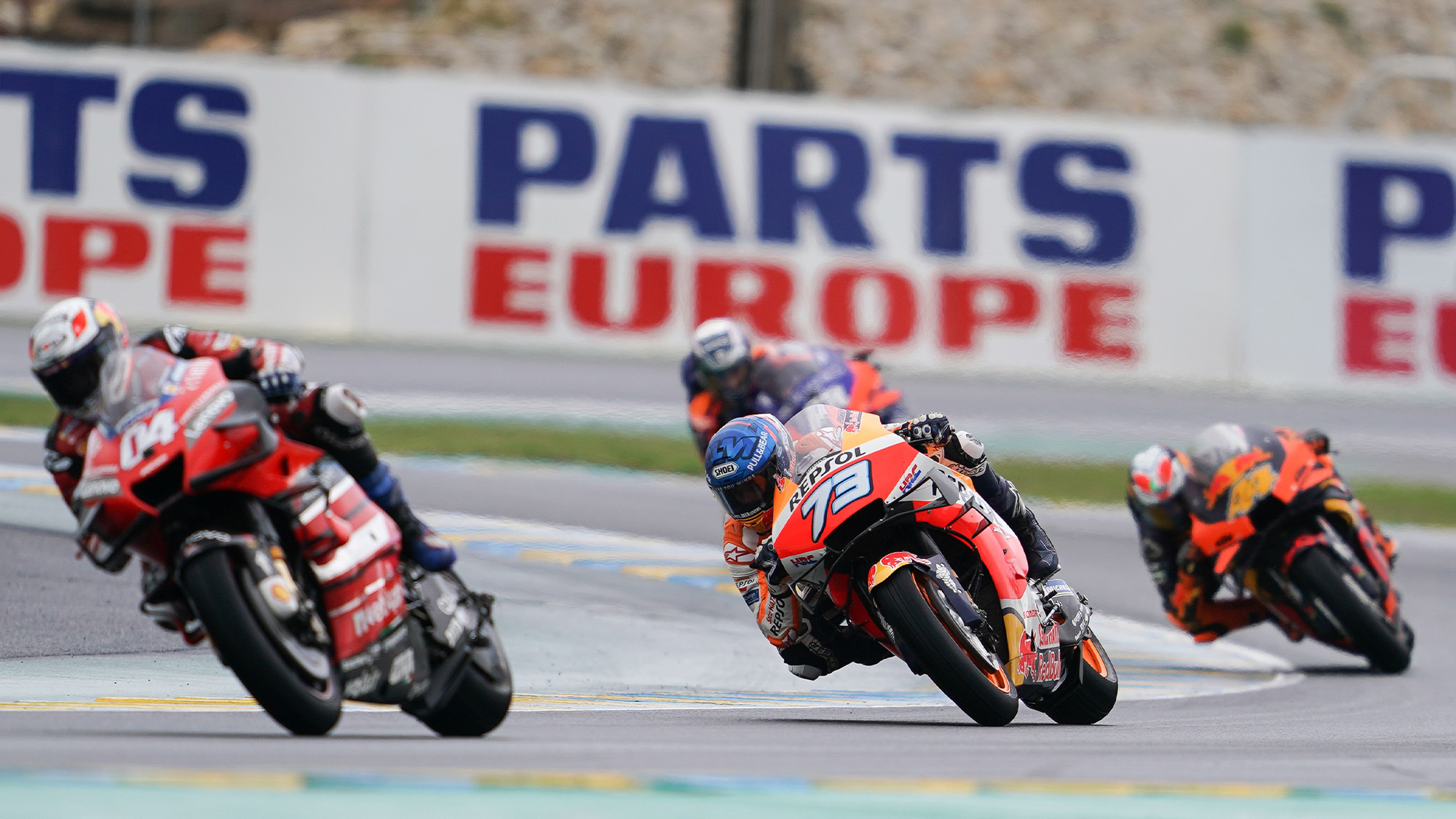 V4s to the fore: Dovizioso, Márquez, Espargaró and Miguel Oliveira

This was a major problem at Le Mans because the track was so damned cold. During practice and qualifying Pol Espargaró and his fellow RC16 riders wanted to use Michelin’s medium front slick – for better support on the brakes – but if they used the medium compound they knew they risked a crash because the tyre wouldn’t get up to temperature, especially on its left side, for the track’s fewer left-handers.

“I was thinking of trying the medium front in FP4, but I didn’t want to risk that much,” said Espargaró.

So all four KTM men fitted soft front slicks for Sunday afternoon, which would surely have given them difficulties if the race had been dry.

“It was a borderline decision between the medium and the soft front slick for us,” said Espargaró’s crew chief Paul Trevathan. “But with the temperature at only 16 or 17 degrees we just didn’t want to take the chance with the medium, even though the soft stopped us from using the strong points of our bike.”

Trevathan agreed that the V4s had the advantage on Sunday.

“When the track is like that it’s safer to brake late and upright, stop the bike and squirt it out again,” he added. “If you need to carry corner speed to go fast it wouldn’t have been so nice out there.”

The fastest inline-four rider on Sunday was Suzuki’s Álex Rins, who charged through from another lowly grid position to pass Espargaró and then take off after the leading trio of Ducatis: Petrucci, Andrea Dovizioso and the luckless Jack Miller.

One of the secrets to the Spaniard’s speed was his choice of the medium front. This gave him enough stability in straight-line braking to catch the Ducatis at quite a rate, but once he was in amongst them, they were harder to deal with. Finally he got the better of Miller and then audaciously snatched second place from Andrea Dovizioso, while the Italian was trying to snatch the lead from team-mate Petrucci. 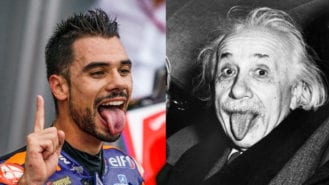 Two laps later Rins lost the front at the Turn Three left-hander – the track’s number-one accident black spot – possibly paying the price for using a harder front tyre than most of his rivals. The medium

Nonetheless the medium front certainly worked for Petrucci and Márquez, with Dovizioso struggling with his soft/soft choice when the track started to dry.

By then harder tyres all round had the advantage, because the fastest man on track was Avintia Ducati’s Johann Zarco, who used a medium front and rear.

During the early, soaking laps the Frenchman was in all kinds of trouble, trying to get heat into his rear tyre. At one-quarter distance he was way down in 14th. During the last quarter of the race he was the fastest man on track, one and a half-second better than the leaders.

If the race had gone on for another few laps Zarco might’ve scored a home-race podium. If…