The FIM will soon make its decision about Ducati’s alleged aero device, but there is only one sensible way out of this mess 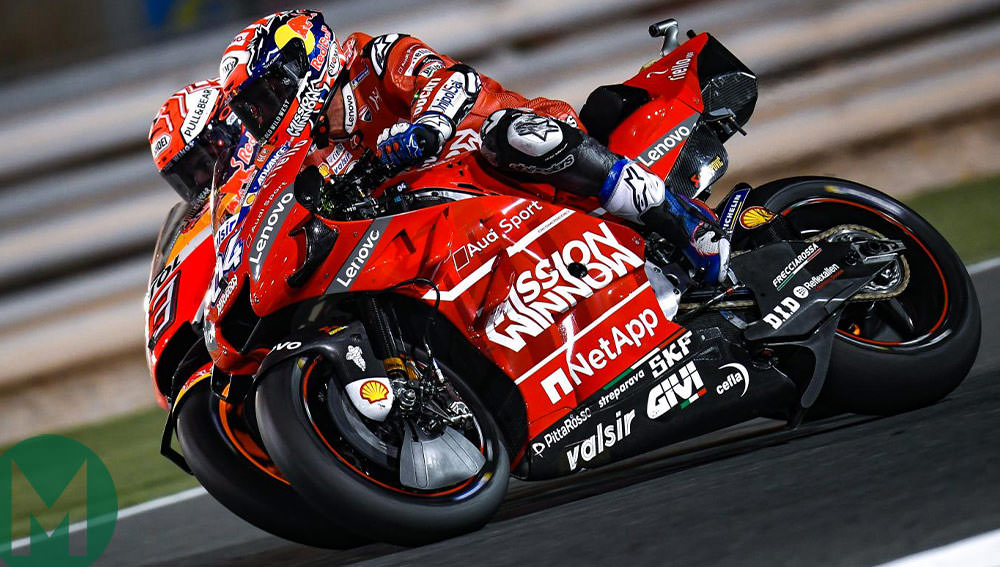 MotoGP’s Court of Appeal will sit at the end of this week to decide the fate of Ducati’s alleged swingarm aerodynamics device and the 25 points that Andrea Dovizioso scored in Qatar.

What is MotoGP’s court of appeal and how will it come to its decision, which will be announced before next week’s Argentine Grand Prix?

The court consists of three FIM (Fédération Internationale de Motocyclisme) judges chosen from the governing body’s international commission of judges, which consists of a dozen national federation members from Spain, Argentina, Poland and elsewhere. All of whom know very little – if anything – about aerodynamics. Presumably they will be given the facts of the case before they sit, but neither do the people who make the rules or enforce the rules know much about aerodynamics. This is a problem.

The sensible way ahead is to follow Formula 1’s example of tolerance (No, trust me!)

There is little doubt in my mind, having spoken to a Formula 1 aerodynamicist, that Ducati’s latest bolt-on does offer an aerodynamic benefit, but Gigi Dall’Igna can rightly claim that it cools the rear tyre. By increasing downforce on the tyre the device reduces wheelspin, which is the real enemy of tyre life. Every time the tyre breaks traction – when torque delivery exceeds grip, during gear changes and over undulations and bumps in the asphalt – it suffers deformation as the rubber stretches and shrinks multiple times. The tyre also suffers a spike in temperature. All of these incidents accelerate tyre degradation.

Ducati first used its swingarm device with Danilo Petrucci, claiming that it’s a tyre-cooling and therefore a safety device for the burly Italian, whose 78kg tend to overheat his rear tyre. The rival manufacturers accepted this, because there’s no doubt Petrucci’s weight is a handicap. However, when Ducati fitted the device to the GP19 of Dovizioso for the Qatar race all hell broke loose in rival garages.

Dall’Igna held firm, convinced of the legality of his latest gizmo, which, just like his front-end winglets and aero sets, is a reaction to MotoGP’s post-2015 technical regulations. The front aero is a consequence of less effective anti-wheelie software, while the rear aero/tyre cooler is a consequence of tyres that need more looking after. You have to hand to Dall’Igna and Riccardo Savin, Ducati’s vehicle dynamics and design manager, because they appear to be thinking harder than anyone else in pit lane.

Dall’Igna claims that his rivals (in this case led by fellow Italian marque Aprilia) are ganging up on him. Perhaps inevitably, his reaction to the Qatar protest was to counter-attack with a complaint about Honda’s latest X-Wing-style aerodynamics.

Where will all this end?

In the Ducati case, MotoGP’s court of appeal must decide whether the bolt-on is a tyre cooler, for which use it was approved, or an aerodynamic device, in which case it “isn’t permitted in the guidelines”. Note that word “guidelines”. Or perhaps the court will decide that it’s a bit of both.

Whatever the choice the court makes, it won’t be from a position of anything close to full knowledge of the subject. And there is no actual rule banning the device, merely some guidelines. In another words, this is a mess.

What MotoGP now needs a workable, reasonable method for dealing with such grey-area technical disagreements. The sensible way ahead is to follow Formula 1’s example of tolerance (No, trust me!). F1 has a system in place that allows borderline technological innovations – dreamed up by clever engineers who have found nooks and crannies in the rulebook – to be used for the remainder of that season. Then, in most cases, at the end of the year an F1 tribunal looks at each device and decides whether to permit its use in the future or to specifically write it out of the game.

MotoGP must not allow itself to race on Sundays and then decide the winner sometime in the next couple of weeks. That’s not racing, it’s just stupid. 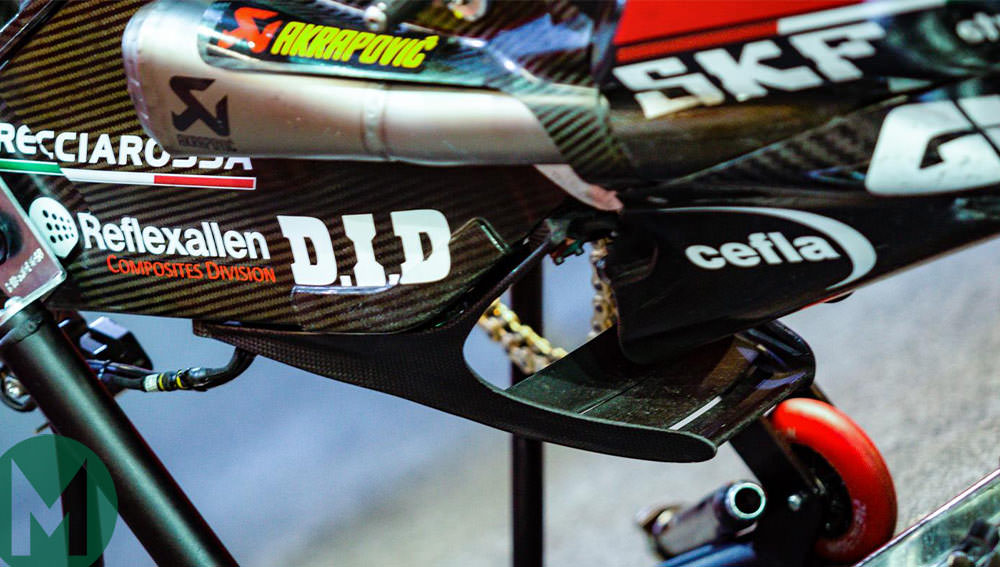 This latest aero hullabaloo has certainly destroyed the uneasy peace that occasionally reigns within the Motorcycle Sports Manufacturing Association. The MSMA is a bit like a MotoGP version of the United Nations: all the top racing brands sat around a table, pretending to work in unison, when in fact they are trying to beat the hell out of each other.

The Qatar protest has a particularly interesting dynamic to it. The man who led the objection was Aprilia Racing’s newly appointed CEO Massimo Rivola, who was sporting director at the Ferrari F1 team from 2009 to 2018. Therefore you might argue that Rivola was more in the middle of the argument than on one side.

The links between Ducati Corse and Scuderia Ferrari are often overstated. There is no secret tunnel between Borgo Panigale and Maranello, and they don’t design each other’s machinery. But there is no doubt that the two race departments do communicate. Some of their engineers went to the same universities, so there are professional friendships which inevitably lead to talk about problem-solving, because motorcycle engineers can learn from car engineers and vice versa.

Indeed there has always been information exchange between the two legendary marques. After all, Enzo Ferrari and fabled Ducati engineer Fabio Taglioni were friends from the 1930s. Signor Ferrari later tried to lure Taglioni to his company and legend has it that Ferrari suggested Taglioni swap valve springs for desmodromic-actuated valves, because mid-century metallurgy was known for causing frequent spring breakages.

Taglioni’s early Ducati race bikes wore a prancing horse symbol as a tribute to Francesco Baracca, Italy’s most successful First World War flying ace, who hailed from Taglioni’s hometown and flew with the symbol painted on his plane. Ducati quietly retired the horse following a request from Ferrari, who had also adopted the symbol on his cars, also in memory of Baracca.

In 1990 Enzo’s son Piero Ferrari built an all-carbon-fibre 500 GP chassis for Cagiva, Ducati’s sister brand, both owned by the Castiglioni brothers. A few years later Ferrari engineer Riccardo Rosa took over the Cagiva 500 project and turned the bike into a winner, using Ferrari-made swingarms and so on. (Rosa later engineered Cagiva’s F750 road bike, which became the MV Agusta F4 when the Castiglionis added MV to their collection of motorcycle brands.)

Sunday’s season-opening Australian F1 GP also highlighted the friendship between Italy’s two most famous racing brands; Ducati’s 2007 MotoGP champion Casey Stoner was a VIP guest of Ferrari at Melbourne and was taken onto the grid to have a close look at Sebastien Vettel’s car.

How do the MotoGP riders do it?

And since 2003 Ferrari and Ducati have shared the same sponsor – Philip Morris – which only helps to strengthen the bond between the two companies.

So there’s a long history of cooperation and mutual admiration between Ducati Corse and Scuderia Ferrari. All this got me thinking about Rivola’s protest. I can’t help but wonder which of his former colleagues in the Ferrari aerodynamics department he contacted to ask about Ducati’s swingarm bolt-on. And whether that Ferrari engineer aero knows anyone in Ducati’s aero department. Motor sport can be an incestuous business.