Of course he could be. Those who last year suggested Ducati had paid too much for the wrong man failed to see that 2017 was merely an overture 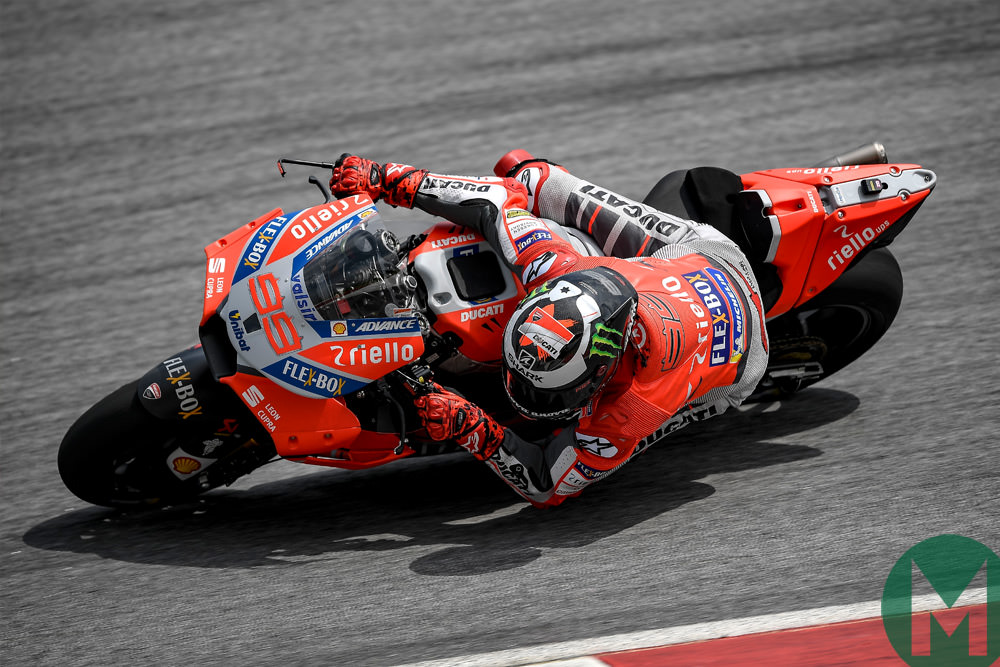 Last March, in the Arabian desert, I thought that Jorge Lorenzo was going to pull off the biggest surprise since Valentino Rossi won the 2004 Africa Grand Prix. Lorenzo and his new Ducati hadn’t had the best of times at the first two preseason tests, but when they tested at Losail, they were less than two-tenths off the fastest time.

The problems that had affected Lorenzo and the GP17 at Sepang and Phillip Island disappeared at Losail, which is a very particular kind of a racetrack. Lorenzo loves the layout and so does the Ducati (between them they’ve won six races there), so I believed they could win the race. But then that biblical storm hit, leaving Lorenzo way back on the grid.

The rest of his 2017 season was up and down, but the general trend was upwards. Moving from a Yamaha to a Ducati isn’t easy. The Japanese and Italians have their own ways of building race bikes, especially Ducati’s Gigi Dall’Igna, who uses a lot of Formula 1 technology: downforce aerodynamics, mass dampers and computer tyre modelling.

At Sepang Dall’Igna’s creation had a brand-new F1 gadget tucked inside its fairing bubble (just ahead of the upper triple clamp): a pressure transducer that measures pressure on the bike’s radical downforce bodywork, to get the Desmosedici further ahead in the aero race.

During the last third of 2017 Lorenzo led several races but was unable to maintain that pace to the finish, because he had to adapt his technique too much to suit the Ducati. Now Dall’Igna has adapted the bike to his technique. During his record-breaking lap at Sepang last week he looked much more at one with the bike, displaying sublimely smooth, unerringly accurate speed, in the style of John Kocinski and Max Biaggi.

Last year Lorenzo was strong into and out of corners but struggled in between. Some riders could handle that, but Lorenzo’s killer skill is mid-corner speed. The GP18 has been made to work better through corners, most likely through fine-tuned chassis stiffness and softer bottom-end power, so he can get on the gas while on the edge of the tyre.

“The bike turns better and I can open the throttle more quickly,” confirmed Lorenzo during his final media debrief at Sepang. “The bike has improved in a lot of areas, so I can take profit of more of my best points. But Sepang is a special track and the tyres are different from one track to another. Also, four or five of the manufacturers are very competitive, so one brand will be ahead of the others at one track, and another bike will be ahead at another track.

“At the moment I cannot make a prediction about winning the championship, because winning a world championship takes a lot of things. But if we are quick as we are here…”

The last time I had a one-on-one interview with Lorenzo was at Motegi last October. We spoke about the differences between Yamaha’s YZR-M1 and the Ducati.

“Every bike asks you to do different things,” he said. “The Yamaha asks you to brake soon and open the throttle soon, which makes the lap time. The Ducati doesn’t ask you for that. The Ducati is good on braking, so we gain there, and I think we are about equal on acceleration, but what we gain on braking we lose in mid-corner speed.”

During 2017 Lorenzo got a lot of criticism from fans who compared his results to the successes of Dovizioso, whose salary is substantially less generous. I asked Lorenzo if he was affected by what people said about his performances.

“And what did you say about them?” he answered.

“The problem was the expectation,” he went on. “Ducati made a big bet on me. I had fought for the championship for the last eight or nine years, so some people thought I would fight for wins from the start. But it wasn’t like that. I found a bike that was somehow the opposite to my riding style. Using the same riding style as I had used on the Yamaha was impossible.”

There’s a reason Lorenzo rides the way he rides. While most of his rivals spend their downtime hurtling around dirt tracks, Lorenzo performs low-speed technical exercises on asphalt, painstakingly following curves painted on the ground by his father Chicho.

Chicho runs Lorenzo Competicion schools in Spain, Portugal, Italy, Greece, Mexico, Costa Rica, Venezuela and Chile that use the same methods he used and still uses with his son: “controlled repetition of technical exercises” to create an “elegant, precise, regular and safe” technique. Fast too.

Chicho also borrows training techniques from Mossad, Israel’s secret service; because anyone who has raced will know that racing can be like a warzone. The Mossad-based training is about staying calm amid the chaos.

“Mossad train in simulators in high-stress situations, monitoring heart rates and teaching people to be at their limit while remaining calm,” Chicho explains. “Because the calmer you are, the stronger you are.”

Like any father and son, Chicho and Jorge have had their differences. In his autobiography, Jorge claims he had a tough childhood. Chicho admits he worked his son hard.

“In order to grow in anything you need to work hard and you need a lot of discipline,” Chicho explains. “Jorge needed discipline to grow and it’s hard to have so much discipline, but it’s much harder to spend the rest of your life working for a thousand Euros a month.”

I’ve also had my differences with Lorenzo. But then I’ve had differences with a few riders. In 1989 Eddie Lawson threatened to set his attorneys on me, for a story I’d written about his move from Yamaha to Honda. The story was based on interviews with his team owner and another team rider, so I was confident of its accuracy. I never heard from his attorneys.

It’s a peril of the job that you upset people. When I worked at Motor Cycle News, legendary sports editor Norrie Whyte told me that if you’re liked in the paddock, you aren’t doing your job properly. A bit extreme, perhaps, but I saw his point. There’s a middle ground, of course. You seek a professional relationship with people, but there’s nothing worse than journalists that pretend to be friends with the riders.

I have disagreed with Lorenzo on a few things, mostly his haste to blame rivals for what he deems dangerous riding. There was his condemnation of Marco Simoncelli, his bizarre criticism of Valentino Rossi’s overtake at Misano in 2016 and his disapproval of Marc Márquez’s first-corner move at Sepang last year. Also, his unwillingness to allow Dovizioso to decide his own fate at the Valencia finale.

Some people accuse me of criticising Lorenzo because I prefer Rossi. But not so long ago Lorenzo told me, “Valentino thinks you are against him”. I don’t know why Rossi might think that (or even if he does), but perhaps it’s because at the end of that most controversial of all MotoGP seasons I wrote, “Lorenzo was undoubtedly the fastest man out there in 2015… I’ve also been impressed by his ability to keep his head and ride an inch-perfect race in front of thousands of booing fans wearing yellow-tinted specs… the more he’s hated by fans who refuse to acknowledge his brilliance, the more I like him”.

So you can’t win: if you applaud one rider, you get denounced by another. Not that it bothers me. I’m mostly disinterested in who finishes first; I enjoy good racing and watching the otherworldly skills of the world’s best riders doing their thing, then talking to them about it. I try to write it like I see it, which doesn’t always go down well. And, of course, sometimes I make mistakes; just like the riders.

Some racers aren’t too bothered what journalists write about them, others hate reading negative reviews, just like many actors and musicians.

I’ve a friend who used to be in a punk band. He’s also an ophiophilist, so he keeps snakes in his flat, many of them venomous. Some years ago the NME (Britain’s most influential music newspaper) gave him a bad review. He wanted punk revenge; so he set up a video recorder in his lounge, laid a copy of the NME on the floor, collected his favourite venomous snake, squatted on the paper, had the snake bite his arm, went into a hallucinogenic trance and did a poo on the NME. The next day he posted the video to the NME offices.

I suppose nowadays revenge videos would be uploaded to YouTube. I can hardly wait.