Almost two decades ago Yamaha built a single-crank new YZR500 to beat Honda and Valentino Rossi to the final 500cc title. The bike remained a secret, until now… 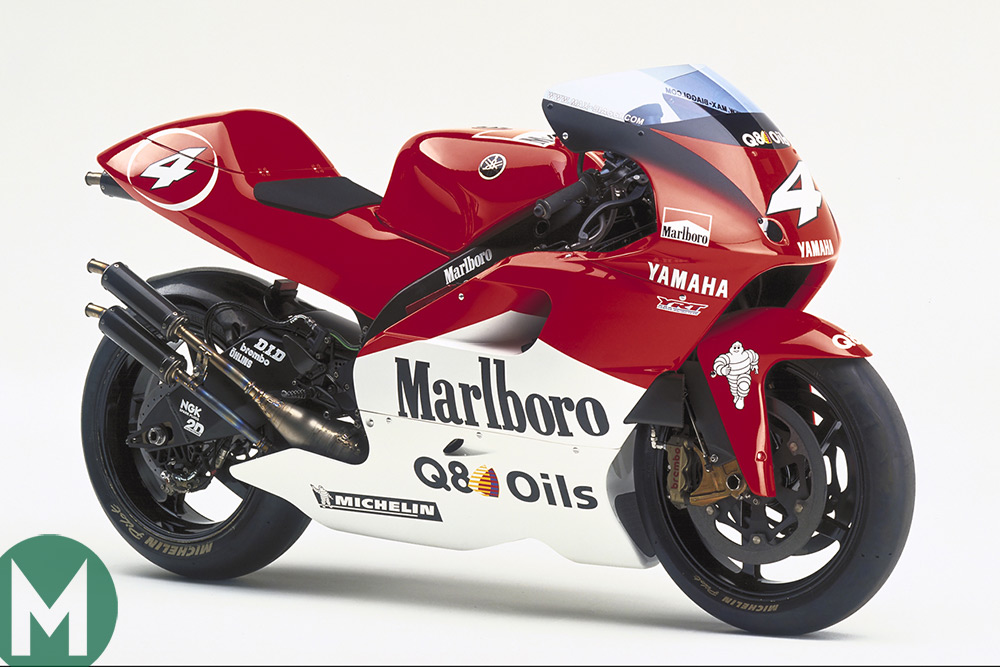 Yamaha has won plenty of MotoGP titles since the four-strokes arrived 16 years ago, but the factory had a miserable time in the final years of the 500cc World Championship. Yamaha was defeated nine years in a row, mostly by Honda, which is why its engineers built an all-new bike for the final 2001 season of 500s, when Honda and Valentino Rossi would be their greatest rivals.

This bike was tested in Europe in the summer of 2000 by Marlboro Yamaha riders Max Biaggi and Carlos Checa, less than 18 months before the final 500 GP, but never raced. And somehow, Yamaha managed to keep the project secret. Until now.

Yamaha engineers were so desperate to win again that they cribbed the bike’s most vital performance feature from Honda’s NSR500, winner of seven of the last nine 500 championships.

The battle for supremacy between Yamaha and Honda V4s had been the big deal in the premier class since the mid-1980s. The two machines were similar, but for one crucial difference: the NSR500 used a single crankshaft, while Yamaha’s YZ500 used two contra-rotating cranks.

During the first decade of this technology duel, Yamaha’s twin-crank engine seemed the better solution. The two cranks rotated in opposite directions, cancelling out torque reaction and crankshaft inertia for friendlier handling and power delivery. So much so, that Honda built a twin-crank engine in the late 1980s but never raced it because HRC hated copying rivals. After all, a twin-crank NSR would’ve been like Yamaha building a V4 MotoGP bike for 2018, or Ducati building an inline-four.

By the late 1990s, it was Yamaha doing the copying. Biaggi and Checa, who had both joined from Honda in 1999, became convinced they needed a single-crank YZR500 if they were to win the historic final 500cc crown. 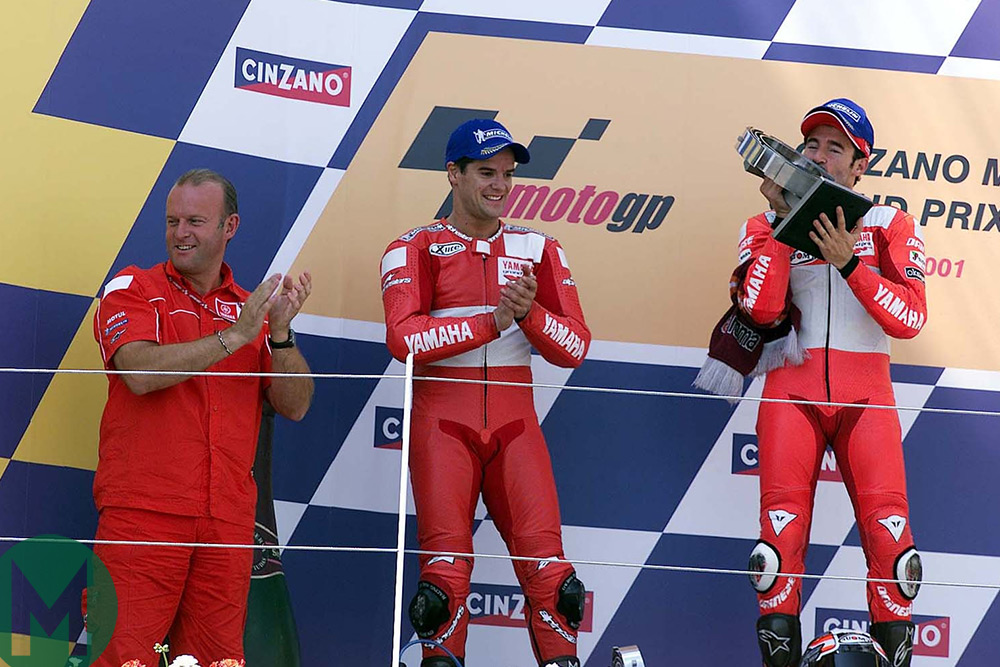 How so? Twin cranks that balance out each other’s forces made a lot of sense, at least until the understanding of the weirdness of bike racing advanced to a point where engineers realised that crankshaft inertia can be a good thing.

The NSR’s reverse-rotation single crank reduced gyroscopic effect, which made the bike easier to turn and loaded the front tyre better for more grip and better feel. Both Biaggi and Checa had been suffering frequent front-end crashes, which they grew to blame on the YZR’s engine configuration, not its chassis configuration.

Thus better turning and more front grip were the advantages Yamaha was chasing when it flew two all-new YZR500 0WL (that’s zero, W and L) motorcycles to Europe in August 2000.

The stillborn YZR was a money-no-object creation, with its outer cylinders laid down and inner cylinders standing up. Biaggi and Checa spent days and days testing the bike at Brno in the Czech Republic.

“At that time we had lost the championship for too many years, so we had to do something because of big pressure from the top of the company,” says Masahiko Nakajima, who has been part of Yamaha’s factory GP team for more than three decades and is now President of Yamaha Motor Racing. “The twin-crank engine was like Yamaha property, but in the end, we thought we should make a single-crank engine.

“This was very interesting for our engineers because it taught us a lot. Of course, we wanted to build a good bike, but in fact, it didn’t matter if the bike was good or not, because we would learn a lot. It would be a valuable lesson for the development of our first MotoGP four-stroke [also single crank] and also perhaps for our street bikes.”

This is one of the joys of motorcycle racing: number-crunching and CAD design won’t give you all the answers, you must put the engine and chassis on a racetrack to get the real answer. 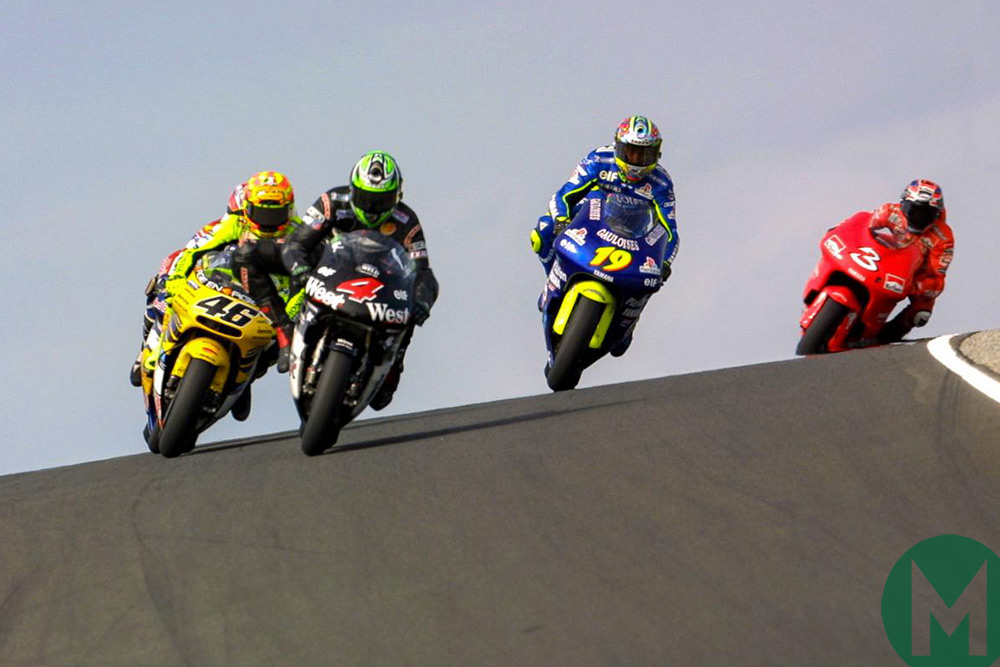 So what was the answer?

“The conclusion was some good points, some bad points,” Nakajima grins. “Max and Carlos enjoyed the bike and said that it gave them a good front feeling. But Max said we need a single crankshaft for front feeling and a twin crankshaft for good rear traction! So we went back to Japan and discussed the project with all our engineers. Finally, my personal opinion was that there wasn’t a big difference. And because we had more experience with the twin-crank engine, and because the single-crank engine was wider, we decided to contest the final 500cc season with the machine we knew better.”

While Nakajima and his fellow Japanese engineers returned to Japan after the Brno tests, Biaggi, Checa and the rest of the team stayed on to do their own highly unofficial development work. These were early days of chassis flex knowhow. Engineers already knew they needed a frame and swingarm that gave some lateral flex to improve cornering performance, but not much was known about how to achieve that. Thus the Marlboro Yamaha crew spent its final day or two at Brno with hacksaw and drill in hand, sawing slots and drilling holes in various frames, then testing the results, searching for that all-important front-end feel.

They never really found it. Biaggi was soundly beaten to the 2001 championship by Rossi, his title tilt going awry at Brno where he crashed after (you guessed it) losing the front. Yamaha continued to struggle with front-end feel with its MotoGP four-strokes, until Rossi defected from Honda in 2004, bringing with him crew chief Jeremy Burgess, who knew how to make a motorcycle work.

“Yamaha’s effort with that new 500 was awesome, it was an impressive commitment to engineering,” says one team engineer who was part of the YZR single-crank project and prefers to remain anonymous. “They must’ve spent millions on the bike that was only going to race for one season. It was great fun doing all the testing in secret, but in the end, the twin crank wasn’t better than what we had. After that Brno test, the bike went back to Japan and we never saw it again.”

When I asked Nakajima if he could supply some photos of the YZR 0WL he laughed and said, “Maybe 50 years from now…”