Since Yamaha entered MotoGP in 1973 the factory team has endured only two grands prix worse than last week’s Grand Prix of Europe – when Jarno Saarinen was killed at Monza in 1973 and when Wayne Rainey was paralysed from the chest down at Misano in 1993.

Last weekend was definitely the factory’s most disastrous from a technical perspective. Pretty much everything that could go wrong did go wrong.

On Thursday, the factory was penalised by MotoGP’s FIM stewards for using illegal engines at the season-opening Spanish GP. On Friday morning, Yamaha announced that one of Maverick Viñales’ pit crew had tested positive for Covid, requiring that crew member and four others to leave the circuit and go into quarantine.

On Friday afternoon Yamaha revealed that Viñales had exhausted his season’s supply of five engines, due to valve problems suffered with the factory’s first batch of engines. He needed a sixth engine to complete the season, which incurred the penalty of starting Sunday’s race from pit lane.

During the race the factory’s number-one title hope Fabio Quartararo crashed on the first lap, remounting to finish 14th and last, one place behind Viñales. Meanwhile, Valentino Rossi raced for the first time since completing his Covid quarantine, only to stop with an electrical problem. And Franco Morbidelli, who had won the previous race at Aragon to put himself in the hunt for the title, struggled to 11th with an over-pressure front tyre.

This was the first time since Valencia 2007 that Yamaha had finished a race without a single rider in the top ten. It was a very grim end to a very grim week.

This strange Covid-affected season has been particularly strange for Yamaha. The factory has won half the races – six of 12 – but it doesn’t feel like that because there have been as many low points as high points.

Quartararo has taken three victories, which put him on top of the championship for several months, but his title push faded because he’s failed to score any further podiums and he’s been outside the top seven at the last four races.

Last year the French rookie dazzled MotoGP. At five rounds he came within a second of defeating Marc Márquez. That made him the favourite to challenge the king in 2020. With a year’s experience he should’ve been stronger, instead he’s mostly been lacklustre.

Quartararo blames the 2020 YZR-M1, complaining that the bike is more nervous than the 2019 bike, used this year by Morbidelli to score two victories.

“The bike is totally different to last year and I’ve never felt like this bike is mine,” said the 21-year-old at Valencia. “Even when we achieve great races I never felt that good on the bike like I did last year; that’s my feeling. There’s something missing, so we are not comfortable on the bike.”

“We had a lot of expectations for the 2020 M1 but in reality we didn’t make a big step,” said Rossi on Saturday. “The 2020 M1 isn’t very different and it’s not a clear step forward. Also, if you look at the performance of Morbidelli, he’s having a fantastic season and he’s won two races with the old bike.

“It looks like we don’t understand something about the tyres. It’s incredible that last time a Yamaha won with Franco, but here in Valencia we struggle very, very much with grip. Yamaha has to try to understand the way to improve. 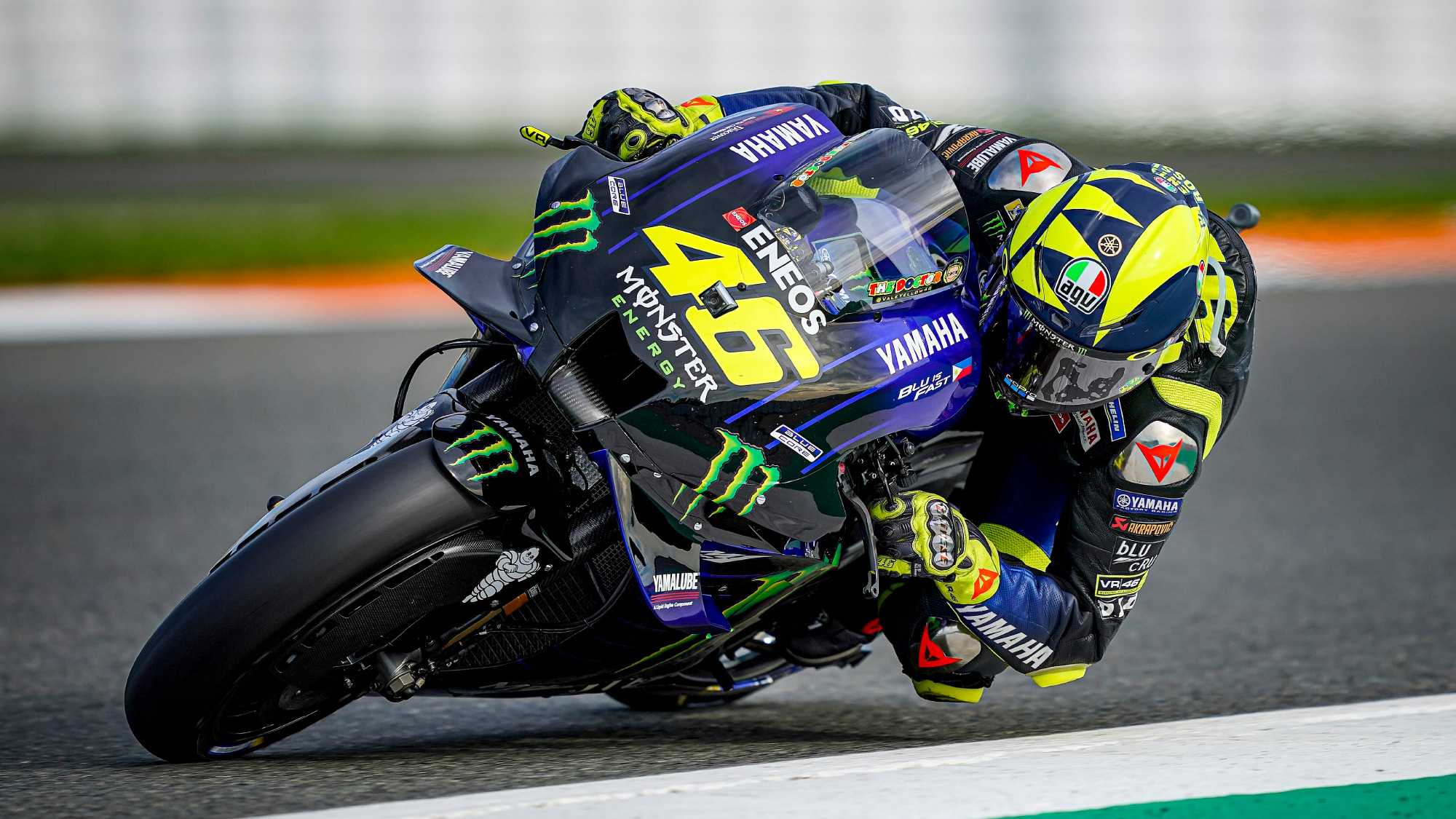 “I didn’t expect the Covid situation to affect the championship so much. It’s been really difficult because we often race at tracks at the wrong time of the year – sometimes it’s too hot, like at Jerez, other times it’s too cold, like at Le Mans, so it’s very difficult to manage. Also to race at a small number of circuits is difficult.”

The M1’s strength was always its balanced character – with its neutral chassis and smooth power delivery – which made the bike MotoGP’s strongest force for a decade or more. The M1 wasn’t always the fastest bike around a racetrack, but over a full season it worked better at more races than its rivals. A bit like Suzuki’s GSX-RR now.

Yamaha has worked so hard to increase horsepower that the M1 engine lost its easy-going engine nature and its reliability.

“For a long time the engine character of the M1 was a strong point for Yamaha, but now it looks like the other engines are smoother than ours,” added Rossi. “The engine department is our first problem because the performance isn’t fantastic. Also the reliability is critical and they made the mistake with the valves.”

To add to Yamaha’s woes there’s never been a worse time in MotoGP to have engine problems. Earlier this year the factories agreed to freeze engine development until the end of next season, due to the financial effects of the Covid pandemic. Therefore Yamaha, like everyone else, will have to use 2020 engines throughout the 2021 championship.

This will surely prolong Yamaha’s pain. The factory’s main issues are the same they’ve been for several seasons – lack of brute horsepower and aggressive power delivery that causes the rear tyre to break traction, reducing acceleration – so its engineers badly need another stab at creating a better engine spec.

There’s little doubt that these problems come from the heart of the engine – poor combustion, incorrect crankshaft mass or whatever – but Rossi seems optimistic that Yamaha can massage the engine to improve performance from the outside.

“Now in MotoGP you can do a lot of things to improve performance from outside the engine, with electronics, cooling and the exhaust,” he said. “So if Yamaha work well and in the right direction we can do better.”

And what will Yamaha do about valves in 2021? Presumably its stock of 2019 valves, used since the second race at Jerez, won’t last into next season, so the MSMA (the manufacturers association) will have to allow Yamaha to use a new make of valve, if they want any M1s on the grid.

Yamaha’s valve nightmare began last winter when the company that makes the M1’s valves ceased manufacture. The factory found a new supplier for its valves but started the season using valves from two different companies. The valves were of the same spec, but they came from two different sources, which is against MotoGP’s engine rules that require each rider’s engines to be exactly the same as a sample engine delivered to MotoGP technical control before the first race. 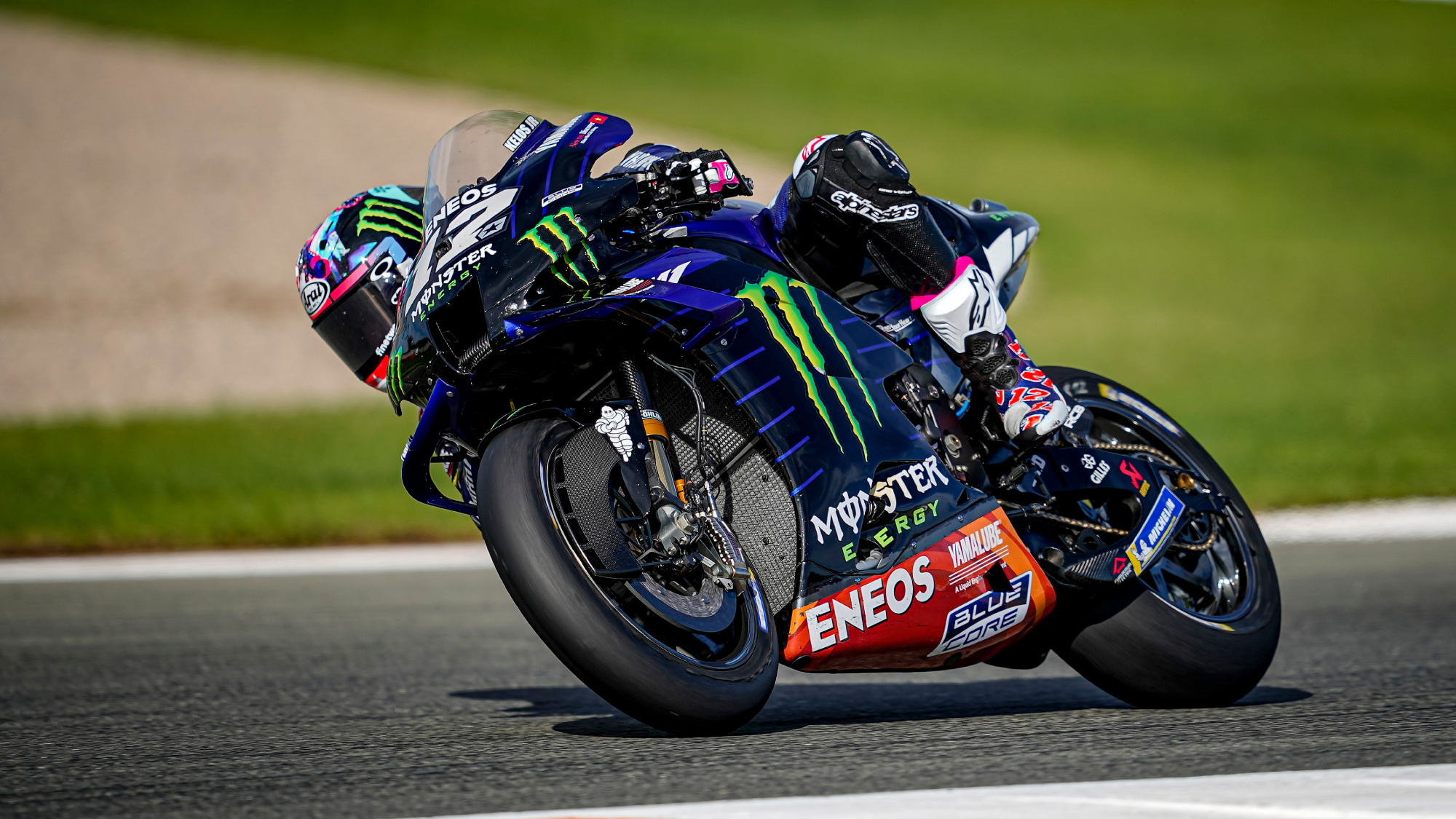 Viñales fights back from his pit-lane start on Sunday

However, because neither the stewards nor Yamaha would publicly comment on the case it was impossible to find out exactly what had happened. This was bad news for MotoGP as a whole and especially for Yamaha, which looked like it had committed a worse crime than was actually the case.

Therefore Yamaha made its only rules infringements when all four riders used the new valves at the first race and when Morbidelli used one of the first batch of engines during Styrian GP practice and qualifying. Apart from those instances, all Yamaha riders used engines fitted with old-spec valves.

The reason Yamaha wasn’t penalised until last week, despite breaking the rules in July, was because the company had commissioned an independent analysis of both makes of valve, hoping to prove to MotoGP technical control that they were exactly the same. The results of that test became available last week, forcing Jarvis to admit that there is “some nuance in materials”. Sanctions were therefore imposed.

For the sake of Yamaha and of MotoGP, there needs to be better communication when the stewards impose sanctions for more complex rules violations. There is nothing whatsoever to be gained by such a lack of transparency.

Yamaha’s illegal engines: how did it happen?

Yamaha won’t forget the 2020 season in a hurry – blown engines, illegally modified engines, stewards' sanctions and more have tarnished the factory’s challenge for the MotoGP title

Ironically, Yamaha’s worst race in 13 years may have been a blessing in disguise for everyone concerned, because if a Yamaha rider does win the title there’s no doubt the success will be a tainted, because how come Quartararo, Viñales and Morbidelli were allowed to keep the riders’ points they scored at Jerez while using illegal engines?

All three of them had fair to reasonable chances of hauling in points-leader Joan Mir until things went awry for all of them last weekend.

Now with two races remaining and a maximum of 50 points available they are surely drifting out of touch – Quartararo stands 37 points behind Mir, while Viñales and Morbidelli are 41 and 45 down.

Points aren’t the trio’s only problem. Yamaha’s engine nightmare will continue at the last two races. The Viñales engine that Yamaha withdrew on Friday had covered approximately 1400 miles, around 450 more than a MotoGP engine’s normal life.

Morbidelli seems to be in the deepest trouble. He goes into this weekend’s Valencia race with two engines – one that’s done about 1400 miles, the other with 1800 on the clock. It will be a miracle if the former Moto2 world champ gets through the last two races without a sixth engine, which would incur a pit-lane start.

Quartararo isn’t in much better shape. He also has two engines left, one with 1600 miles done, the other with 690 miles. The last two race weekends should add around 700 miles, so if his older engine finally cries enough his newer engine will also enter the danger zone.

Viñales is in the best shape, thanks to the introduction of his sixth engine, which covered around 225 miles last weekend. His older engine is also way past its use-by date, with about 1430 miles done.

Surely none of them can win the title from here. But this is 2020…