Yamaha’s engine embarrassment has its roots in global events that happened more than a decade ago.

Money was suddenly very tight in MotoGP. No other sponsors could afford to be as generous as Marlboro, Gauloises and the other cigarette brands, especially when the world was in the grip of recession. By 2010 the grid was close to half-empty at some races. something had to be done.

Yamaha claims it changed the valves “due to an internal oversight and incorrect understanding of regulations” which is difficult to believe.

The engine restrictions necessarily required that all engines be sealed, via lockwire and metal seals on various engine parts, from the cambox down, to stop factories modifying engines. All engine parts must be identical across each rider’s allocation engines (usually seven, but five for this year’s Covid-shortened season).

When rumours of Yamaha’s engine embarrassment first circulated the obvious assumption was that engineers had broken the seals of their YZR-M1 engines, so they could replace the faulty valves (manufactured by an outside supplier) which had blown engines belonging to Valentino Rossi, Franco Morbidelli and Maverick Viñales at the season-opening Spanish GP.

In fact Yamaha didn’t break any engine seals. Instead they fitted new valves in their second batch of engines, which were sealed and brought into play following the Jerez debacle.

Whatever the details, the company broke this regulation:

Yamaha claims that it changed the valves “due to an internal oversight and an incorrect understanding of the current regulation” which, however hard you try, is difficult to believe.

Yamaha also claims there was “no malintent in using the valves of two different suppliers that were manufactured according to one common design specification”.

However, Yamaha knew it had broken the rules, because on the eve of round four – August’s Austrian GP – it made a formal request to the MSMA (the manufacturers association) to replace the faulty valves in its surviving Spanish GP engines.

According to the rules “sealed parts that are solely associated with safety issues and which have no performance benefit” can be changed with the unanimous consent of the MSMA. But a burnt valve isn’t really a safety problem.

Rival manufacturers demanded exact details so they could consider the request, which prompted Yamaha to withdraw its request the following week, on the eve of the Styrian GP. 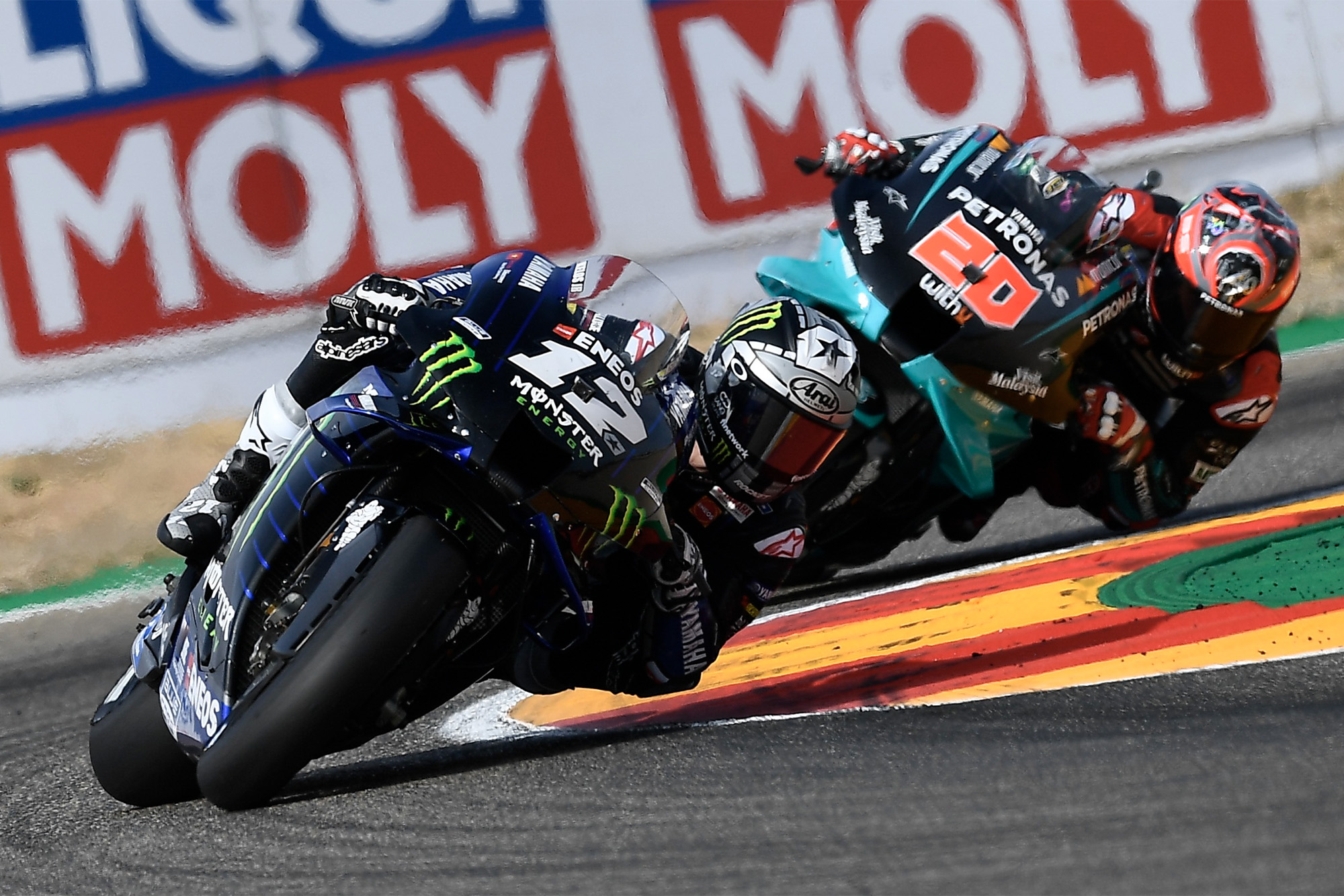 Yamaha’s top two riders in the championship – Viñales and Quartararo

The Jerez disaster left all four Yamaha riders with three engines each to complete the remaining 13 race weekends. In normal circumstances MotoGP engines are replaced after around 950 miles. Yamaha’s problems meant they needed to get 1500 miles out of each surviving engine.

Going into this weekend’s first Valencia race the company’s three title contenders were all pushing the limits of engine mileage. Yamaha management tried to get out of trouble by asking MotoGP’s technical control if they could use their surviving Jerez engines with new valves, essentially admitting that they had fitted replacement valves in their later batches of engines.

The answer came in Thursday’s announcement that the FIM stewards have sanctioned Yamaha for breaking the MSMA protocol on modifying engines.

“Now it turns out that the riders do not benefit from the mechanical advantages [of their machines].”

They also took away the 36 team points scored by both Petronas Yamaha riders in that race and the single point Morbidelli scored at the Styrian GP, after he had used one of his Jerez engines in practice and qualifying.

Finally, they took away the 20 team points scored by Monster Yamaha rider Viñales at Jerez. Viñales had more bad news on Friday at Valencia. He was the first Yamaha rider to run out of engines, requiring Yamaha to fit a sixth engine – beyond this season’s allocation of five engines – for which the penalty is a pit-lane start on Sunday. This is another blow to his title aspirations.

The biggest questions now are, does the punishment fit the crime and should the riders also have been penalised for riding illegal motorcycles?

There are two ways to look at this.

As reigning MotoGP champion Marc Márquez commented, “Now it turns out that the riders do not benefit from the mechanical advantages [of their machines].”

And it doesn’t matter if the riders didn’t know that they were riding illegal machines. Otherwise this sets a precedent. It allows manufacturers to cheat in the full knowledge that they can secure victory in the highest-profile championship – the riders’ championship – while using an illegal motorcycle.

On the other hand…

The replacement parts used by Yamaha gave no performance advantage, so why should the riders be penalised?

So far Yamaha’s only title rivals Suzuki and Ducati have accepted the stewards’ ruling. But what will happen if Quartararo beats Suzuki’s current title leader Joan Mir to the championship by a few points? And what happens if Mir takes the title, but Suzuki miss out on a championship one-two with Álex Rins, because Quartararo and perhaps other Yamaha riders end the year with more points than Rins?

Will Suzuki and other manufacturers really stand by and allow either of those scenarios to happen? Yes, they will, because all the manufactures have signed an agreement to stand by the stewards ruling.