The passing of dear Murray Walker at the ripe age of 97 triggered a wonderful torrent of tributes for a man who was among the most beloved figures in motor sport. Then the sad news got me reaching for my vinyl record collection.

Buried among a 1960s Beatles and Stones-dominated box is an old LP of my dad’s: ‘Sound Stories’ from the 1965 Isle of Man TT – with commentary by Murray Walker. As the sleeve notes explain, the recording was dedicated to Murray’s TT-winning father and “broadcaster par excellence” Graham Walker.

“Graham was a guide and inspiration to all who knew him,” it reads. “To him, the TT was as stimulating as the crisp mountain air he breathed so often in the Isle of Man. And through his voice, wit, wisdom and unflagging devotion, the magic of the Island races has captured the mind and hearts of millions of listeners.”

Sounds like Murray really was a chip off the old block, doesn’t it? He was devoted to his father.

The recording is a period delight, capturing Murray as he was at 41, and in complete thrall to the TT racers. In those famous tones that mixed pure enthusiasm with sincere reverence, Murray talks us through four of the TT races that year, interviewing stars of the day including Phil Read, who downplays his chances of winning the 125cc race on Yamaha’s new twin – then does exactly that!

Other interviews give us a chance to hear the voices of East German defector and tuning wizard Ernst Degner, double world 125cc champion Hugh Anderson, Paddy Driver and more. Then there are the recordings from the 37 and three-quarter-mile course itself, capturing banshee 50cc Honda twins, Suzuki’s new water-cooled two-stroke 125cc twins and Honda’s four-cylinder four strokes – the Japanese revolution that swept through mid-’60s motorcycling right here, in all its vivid aural glory. 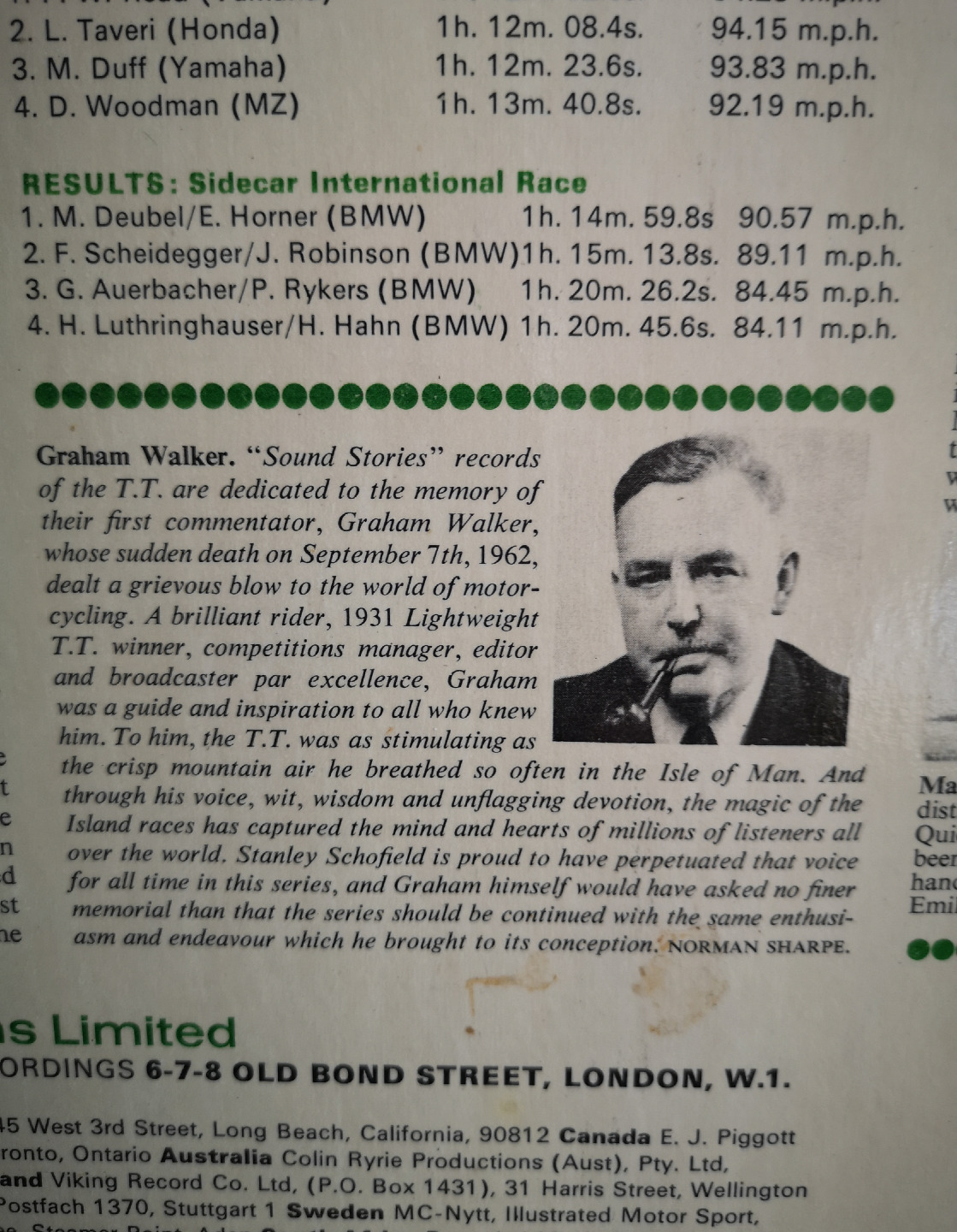 The highlight is on the flipside, as Murray narrates the story of Mike Hailwood’s remarkable ride when he rode an MV Agusta to a third straight success in the Senior TT. In a pre-race interview, Murray gets straight to the point when he asks: “It looks like an easy ride for you – would you agree?” “I’m afraid to say it, but yeah, ‘Mike the Bike’ replies, in his delightfully laconic, modest manner. “Unless I do something silly and fall off.”

Well, as it turns out… Murray reports the “sensational” news that Hailwood has dropped it at Sarah’s Cottage, smashing his windscreen, bending his handlebars, losing his left foot rest and flattening his megaphones. “Surely he can’t go on like this,” says our narrator. Then there’s the sound of his manic pitstop as Italian mechanics descend on the machine to rip the torn windscreen off its fairing.

Mike shouts something to father Stan, changes his goggles and roars back into the race. “Just imagine Hailwood’s feelings now,” says Murray, painting the picture. “He’s riding the race of his life, treating his MV as if nothing has happened,” over the cacophony of the MV negotiating Hillberry. That’s him on the record sleeve, looking grim-faced through his missing windscreen.

Later in the lap, the MV is sounding awfully flat. “Now another sensation. Hailwood pitstops again with one of his throttle slides jammed shut. Sixty-eight seconds later, off goes Mike with his lead over [Joe] Dunphy reduced to a minute and one cylinder running flat out all the time.” After all that, he was still leading with ease! 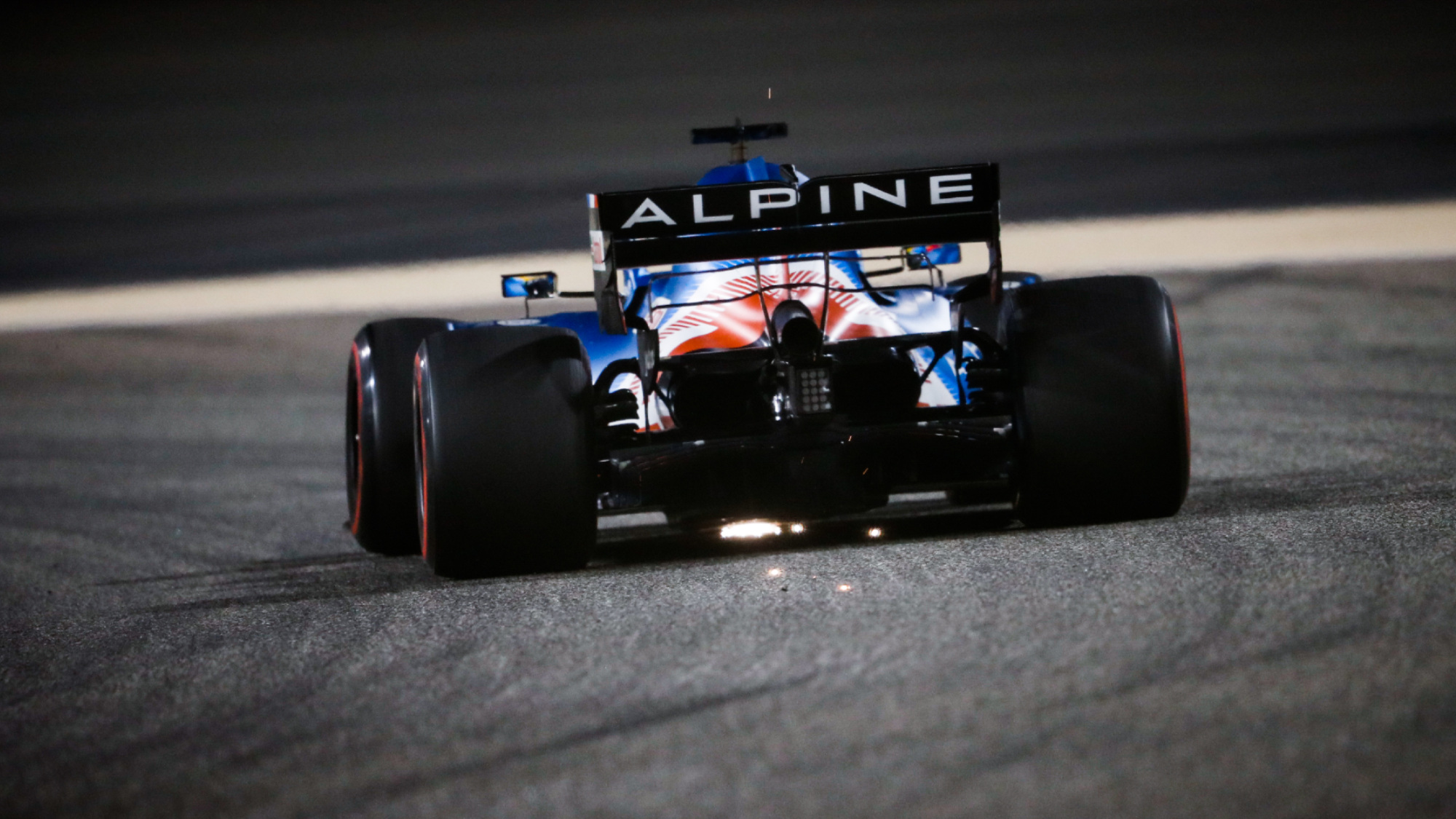 Will too many chiefs at Alpine derail Fernando Alonso's F1 comeback?

Later in the lap, the MV sounds in “surprisingly good tune” as Hailwood “keeps the MV going through sheer guts and determination”. It’s fantastic stuff as Murray welcomes Hailwood home for his seventh TT win, fourth Senior and third in succession. Mike explains his spill after taking the flag. “I wasn’t concentrating too hard, wound it up too hard and found myself flat on the road on my back,” he says with a sheepish chuckle.

“I leant the bike up against the bank, kicked the handlebars straight, gave it a quick check over, fired it up and away I went. There was no effect at all, the engine was still going very smoothly, until the fifth lap when the carburettor slide dropped down and it was on three cylinders until I stopped again. They were going to repair it but it was going to take too long, so they took the slide right out.”

Murray sums up the performance and hails Hailwood as “the greatest”: “In my opinion, that ride of Mike Hailwood’s was one of the greatest in TT history. Everyone expected him to win and win he did. But no one expected him to have to ride half the race on a crumpled bike after a high-speed crash and two very long pitstops.

“Mike Hailwood, we all salute you.”

We salute you too, Murray. Pure gold – and a full generation before his supposed heyday once the BBC started showing F1 full-time. Then again, the great man always was so much more than just an F1 commentator, wasn’t he?