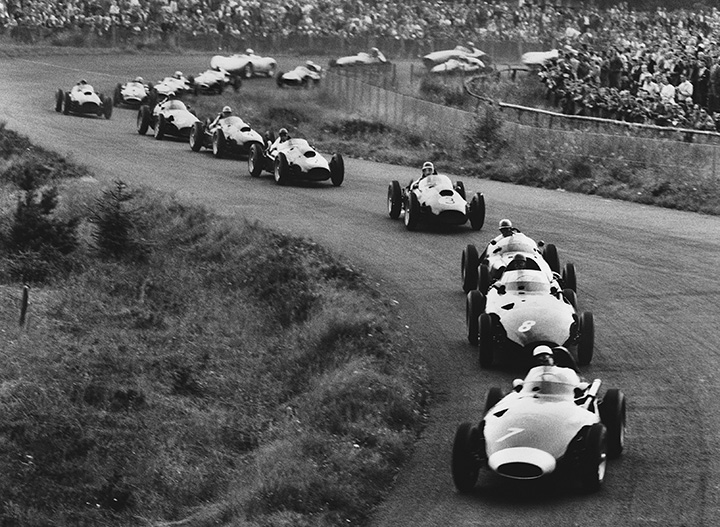 So delve in – and whatever you do, don’t take it too seriously.

One of Tony Brooks’s finest days in a racing car, but also an occasion forever overshadowed by the loss of Peter Collins, who crashed fatally during a three-way battle for the lead – right in front of his Ferrari team-mate Mike Hawthorn.

This was Vanwall vs Ferrari, four British drivers dominating at the Nordschleife in a manner never seen before. Stirling Moss, almost inevitably, made the early running, stretching out a lead in his Vanwall before stopping at Schwalbenschwanz with magneto failure on lap four. At this stage it appeared the two Ferraris had the race under control, with Brooks 22sec in arrears. But then Tony began to reel in the red cars.

Brooks engaged the Ferraris in a memorable duel, taking the lead decisively as they started the 11th of 15 laps. Then disaster: Collins, running ahead of Hawthorn, went off the road at Pflanzgarten, suffering severe head injuries from which he later succumbed. Hawthorn raced on, but clutch failure forced him out one lap later.

Hawthorn later pipped Moss to the title in Casablanca’s season finale, but didn’t have much time to savour his success. He died in a road accident in January 1959.