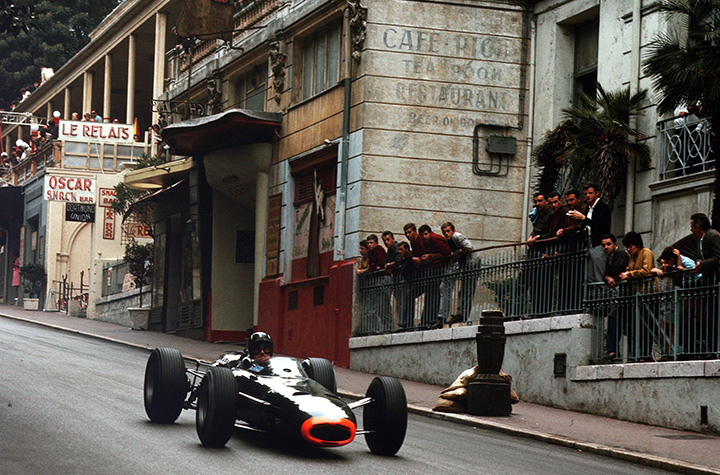 It’s not often that a Grand Prix winner hops out to push his car back into the race. But that’s what Graham Hill had to do during his quest to chalk up a hat trick of wins in the Principality. ‘Mr Monaco’ earned his title during one of his very best drives.

Hill and his young BRM team-mate Jackie Stewart had dominated the early stages of a race that was missing both Jim Clark and Dan Gurney, who were on duty at the Indianapolis 500. But as Hill shot out of the tunnel on lap 25, there was Bob Anderson’s Brabham crawling towards the chicane with a driveshaft problem. Graham took to the escape road in avoidance, resuming in fifth “with a very black and angry look on his face and his moustache bristling,” as Denis Jenkinson put it.

Now for the comeback. Ahead of him, Stewart threw away hopes of a first GP win by spinning on to the pavement at Ste Devote, leaving Lorenzo Bandini’s 12-cylinder Ferrari ahead of Jack Brabham and John Surtees’ V8 Prancing Horse. Stewart had rejoined in fourth, but soon allowed his BRM team leader past. Hill was on a mission.

Brabham took the lead from Bandini, but a broken rev counter would eventually contribute to a blown Climax engine. By lap 50, half-distance, Bandini led once again from Surtees, but Hill was right with them. The unstoppable Graham went on to pass both red cars and set a new lap record on his way to a third Monaco win on the trot. Had he been there, even Clark might have struggled to hold him back. DS