Boy, howdy! That was entertaining.

Visibility was the biggest challenge the drivers faced, what with dust being kicked up when the track was dry and mud caking windshields after the surface was periodically watered down. “Dude, you cannot see anything. Nothing!” Kyle Busch complained on his radio. “You cannot see even the car in front of you.”

Inevitably, there were teething problems as NASCAR ventured into territory it had avoided for the past half-century. The track surface wasn’t perfect. Race officials had to make changes on the fly, notably switching to single-file restarts halfway through the race. Most of the drivers, too, were getting on-the-job training. As Ty Dillon, who was classified 26th, put it: “We’re all still learning what it takes to run this event, whether it’s the teams or the track.”

Okay, so the show wasn’t as seamless as a Friday night World of Outlaws show at Terre Haute Action Track. But that was part of its appeal – the very fact that it felt so unscripted and, well, so un-NASCAR-like. Bottom line? The Food City Dirt Race at Bristol was ten times better than the skeptics predicted it would be, and it was a thousand times more fun than watching stock cars parade around yet another anonymous intermediate superspeedway.

“It was so cool to be a part of something this historic,” said driver Cole Custer, who finished 24th. “It was definitely uncharted territory to put our Cup cars on dirt. But everybody did their best to adapt to everything that happened throughout the weekend, and I think the fans got a new kind of show.”

New and novel is what NASCAR is showcasing this year, when it has a record six road course events on the 36-race schedule. But for the haters, the decision to stage a race on the dirt came with the whiff of desperation.

NASCAR’s popularity peaked way back in 2005 and 2006, and the powers that be have been trying to pump up the numbers ever since. In 2010 came the “Have at it, boys” edict. Two years later, fuel injection was belatedly introduced. The next year brought the Gen 6 chassis, with bodywork more closely resembling street cars. Stage racing began in 2017. Cynics wonder what comes next. Inverted grids? Races run clockwise? Flaming on-track obstacles?

But returning to dirt seems less like a calculated effort to boost ratings than an effort to recapture some lost magic by reverting to a proven formula. NASCAR grew out of a long American tradition of racing on short ovals, most of them on county fairgrounds, originally designed for horses rather than cars. In 1949, during its first season, all of the races were run on dirt except for one outlier – Daytona Beach, which was then contested on the sand. In 1955, dirt still accounted for 40 of the 45 venues on the Grand National schedule.

Darlington Raceway, which was styled as a potted version of Indianapolis Motor Speedway, opened in 1950. But the superspeedway era didn’t begin in earnest until Daytona International Speedway debuted in 1959 and 1.5-mile superspeedways were erected in Charlotte and Atlanta the following year.

As a result, the dirt fields were only half as large as the ones at superspeedways, and races were dominated by a handful of NASCAR stars who were chasing the year-end championship – Petty, Isaac and Bobby Allison being the Big Three in 1970. The iconic high-wing Plymouth Road Runners and Dodge Daytonas didn’t bother showing up for the dirt races, and neither did studs like David Pearson, Buddy Baker, Donnie Allison and Cale Yarborough. 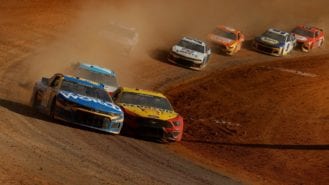 In 1971, dirt tracks were erased from the schedule. But that wasn’t the most dramatic change. No, the news that would have the biggest impact on NASCAR was the arrival of R.J. Reynolds as a title sponsor and the transformation of Grand National racing into the heavily marketed Winston Cup Series. Thanks to the confluence of sponsorship money, manufacturer support and blanket television coverage, the golden age of stock car racing was about to commence.

Eventually, of course, the gravy train would run out of track. The repercussions of Dale Earnhardt’s death at Daytona in 2001 didn’t help. Neither didn’t the economic meltdown of 2008 or growing interest in other sports that millennials find more appealing. Personally, I can’t imagine NASCAR ever capturing lightning in a bottle again. But props for trying.

Next year will bring the debut of an all-new Generation 7 car. There’s talk of a street race in Chicago. And NASCAR’s already announced that Cup will run on the dirt at Bristol again. Which just goes to show that if it’s broke, you ought to at least try to fix it.