The grandstands were packed for the British Touring Car Championship’s return at Brands Hatch last weekend and it wasn’t difficult to see why. The sun was shining on both Saturday and Sunday, quite in contrast to last year’s intermittent snow showers, and the grid was packed with new cars and new faces – plus a couple of well-known older ones. 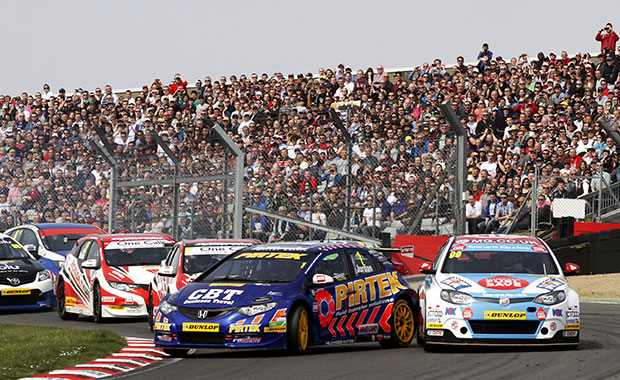 The star of the day was reigning champ and Motor Sport columnist Andrew Jordan, snatching pole from Jason Plato by a scant 0.012sec and winning the first two races. The two were simply on another planet in race one, disappearing into the distance to finish over nine seconds clear of Matt Neal in the new Honda Civic Tourer. Race two was much closer, with Jordan fending off the chasing pack of factory Hondas and West Surrey BMWs. Colin Turkington won race three after fighting past team-mate and reverse grid polesitter Rob Collard.

For the two returning champions – Alain Menu and Fabrizio Giovanardi – the weekend was a mixed bag. Menu qualified well, managing ninth in a Volkswagen Passat that still has a long way to go, while Giovanardi struggled in his Ford Focus, a car that has struggled since the turbo boost regulations changed for 2013.

Incidents plagued both during race day, with Giovanardi’s ninth in race two his best result of the day. Menu overcame his troubles in race three, however, putting in an incredible performance. A first lap off at Paddock Hill in race one left him 27th on the grid for the second event of the day, in which he used his soft tyres to make progress up to 17th. 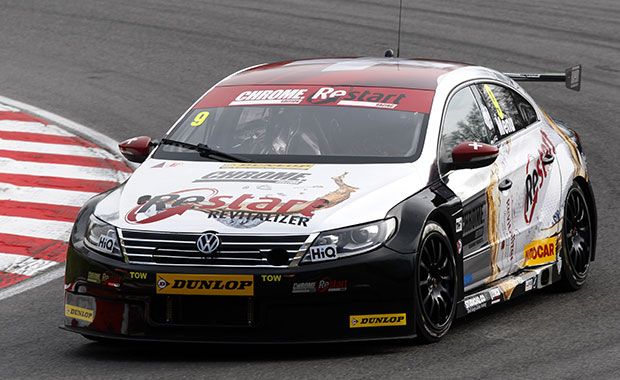 From this lowly position he made his way up to fifth in race three, scything through the field in a performance that was as remarkable as it was unexpected. He might be 50 years old but Menu still knows how to make a FWD touring car work for him. For those of us who were BTCC-obsessed kids during the Super Touring era, his drive was the highlight of the weekend.

Of the newcomers, one name stood out above the rest.

If you’ve been keeping an eye on the BTCC’s support races and feeder series, Tom Ingram’s name will be a familiar one. Graduating from karts to the Ginetta Junior series in 2009 he took the title the next year. Moving up to Ginetta GTs for 2011 he won the G50 class on his first attempt, came third in the top G55 class the year after and won it outright last season. He was always going to make it to the BTCC, but his debut performance still made an impact. 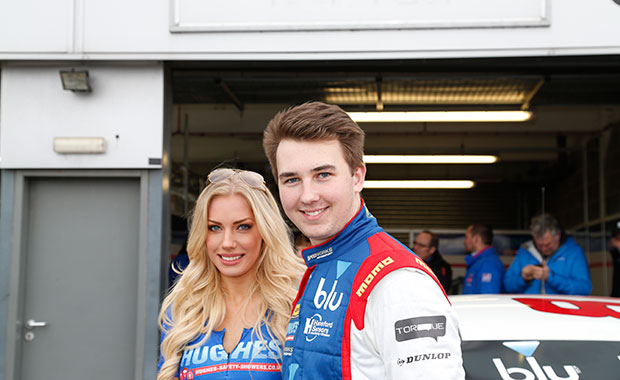 During the offseason the 20-year-old Ingram signed with Speedworks, now entering its fourth season. Owner Tony Hughes admits that the team is still finding its feet and the results for its Toyota Avensis have been hit-and-miss, a fourth place apiece for Paul O’Neill and Dave Newsham being its best finishes.

Despite this Ingram qualified sixth, behind only the five most recent champions. “Qualifying wasn’t as bad as I was expecting,” he says. “I thought it’d be really hard with loads of cars making it difficult to get a clear lap. I did lose a little bit of time up at Druids so in theory I could’ve been even further up the grid. We’re getting closer.”

Ingram fell back a bit during the races, finishing ninth in race one and eighth in race two before a brush with the charging Menu while defending ended his third attempt. It was a mistake of inexperience, but Ingram’s approach is a sensible one and you get the impression he’ll figure it out sooner rather than later. 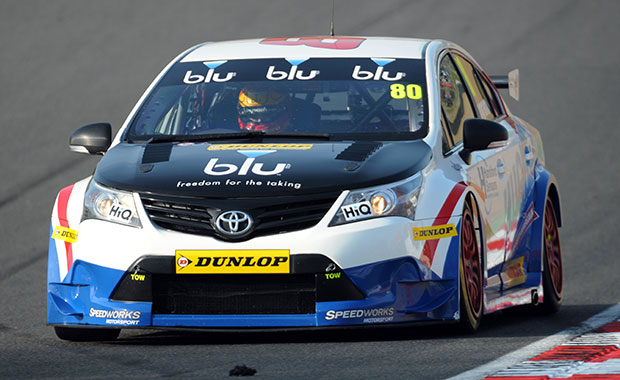 “There are some pretty big differences between Ginettas and touring cars. You’ve got different cars going at different speeds here, with different tyres. The racing’s the thing that’s tripping me up at the moment; in terms of one lap speed we’re bang on. But that’s just down to experience, it’ll get better. The style is very different in the BTCC. The first race I was bullied around like a little school kid but in the second race I gave it back a bit.

“It’s taking time because it’s a big jump. There are still things I’m trying to get my head around. I think we’re at about 75 to 80 per cent of the potential we’ve got at the moment so with a few more races and a few more hours in the car we’ll be even closer to the pace. Over time I’ll become more comfortable and then I can really start pushing it and seeing what works and what doesn’t.

“I’d like to think we can challenge for podiums and wins towards the end of the season, of course that’s the goal. But I’m keen not to rush it. If we’re going to do it we want to be there consistently, not just as a one hit wonder. We can’t just have brilliant peaks, and I think that’s why it’s important for us to take our time.” 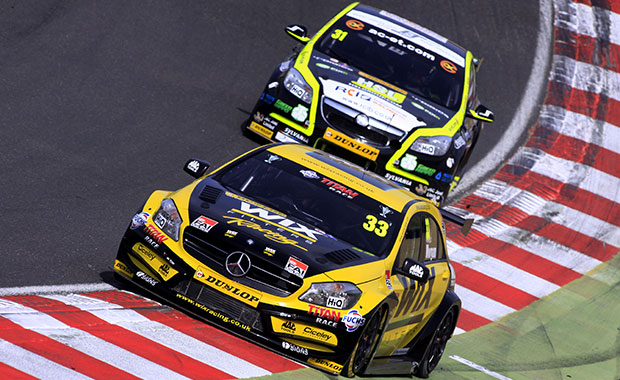 Adam Morgan pushes it too far while Jack Goff gets it right. Sensor strip in bottom right corner

The BTCC weekend was the first major racing event of the year to utilise the track limit sensors installed at Motorsport Vision circuits. During one of the Formula Ford support races I spent some time in race control to see what difference it could make.

The system is elegant in its simplicity: steel pads containing accelerometers placed on the outside of problem corner exits (Paddock Hill, Druids and Graham Hill at Brands) with high definition cameras survey the monitoring zones. It all feeds back to a desk in race control where infractions can be logged and given to the race director. When a driver hits a sensor the appropriate screen flashes red and a picture is taken of the car at that moment.

Simple, right? Well, yes, but the system is still in its infancy. Offenders are logged the old-fashioned way, written down on a piece of paper and taken to the race director. This can be difficult, especially when, as became apparent at Brands, the Formula Ford cars had numbers half the regulation size, making them difficult to identify. In the near future this will be rectified by a transponder loop underneath the circuit that will identify each car. 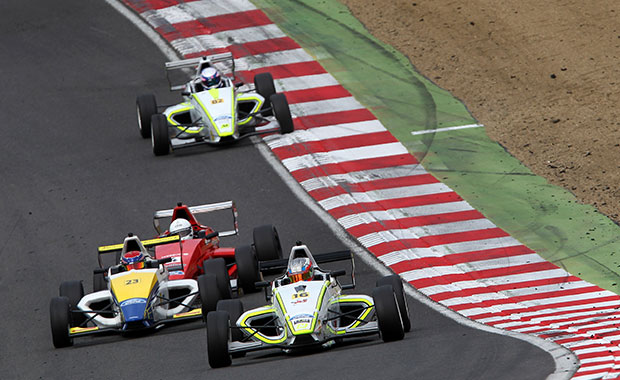 Several drivers have complained about the system, saying that it leaves no room for error. However, under certain circumstances infractions will be ignored. The sensors are only switched on after the first lap or the first lap after a safety car. Also, if a driver has lost control and slides off, or is pushed off by another, this is taken into account. The sensors are 10 inches away from the outside edge of the kerb, giving plenty of leeway.

Time will tell whether the system works as intended: it’s still only in place at MSV circuits and penalties are at the discretion of series officials. But for all the gripes there was one telling statistic from the first touring car race. There were 93 infractions but while Jordan and Plato disappeared into the distance, there was only one against the latter and none for the reigning champion. Good drivers don’t need to cross the lines to be quick.