Sir Stirling Moss was just 32 when his flimsy Lotus – and blue-chip racing career – folded around him.

Typically he had been flat chat at the time – even though all hope of victory in the 1962 Glover Trophy at Goodwood had been lost to a pitstop to cure a gearbox bother.

Fastest lap, therefore, would have to be the tonic, as well as a reminder to up-and-comers Graham Hill and John Surtees – Jim Clark was absent on this occasion – as to who was the boss still.

Sure, Stirling Moss raced to win to earn money to live an exciting, privileged life – but most of all he did so for the hell of it

That’s why he remains a British byword. For speed. (A memorable name helped, too. A bit.)

He had crashed before. Been badly hurt before. But this time this rubber ball of a man would not be bouncing straight back.

He liked nothing better than a tear-up, preferably against the odds, preferably at the wheel of a British car.

The world – and Frank Sinatra – hung on news of his painfully slow recovery, and thus he was even more famous by the time of his hobbling, on crutches – and by a huge force of competitive will – from Wimbledon’s Atkinson Morley Hospital.

He smiled for the cameras and there was a glint in his eye – he was after all in the arms of a bevy of attentive nurses – but that eye, dislodged in the accident, was sunken, too.

His face, drawn, had caught up with that premature hair-loss.

Driving quickly had come naturally to him – and stemmed from a gymnastic core: head tipped back languidly; arms flexed; and wrists cocked. One eye on the road, one on the gauges – yet still with an eye for pretty women in the crowd. 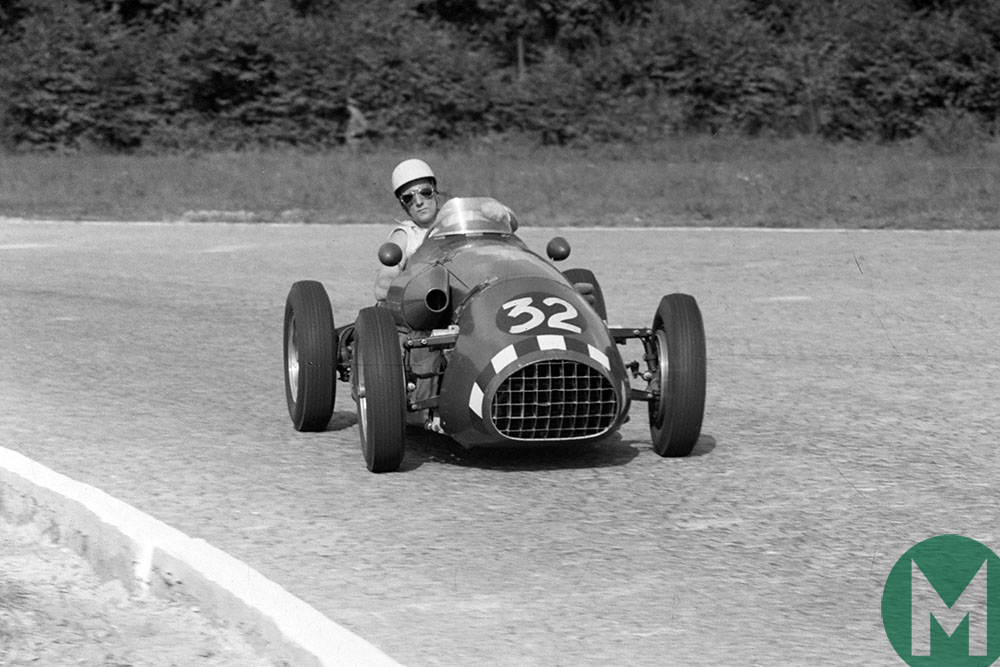 And though he created the blueprint for the modern racing driver, Moss was shot through with Corinthian spirit. That cheery wave to a compliant back-marker was genuinely proffered – albeit with an undeniable hint of showing off.

How, rather than what, he won was arguably more important to Moss – and to his innumerable fans, ranging from awed schoolboys to ‘big kid’ dads, giggly girls to fluttery mums.

If it rained, chances are Moss would win. Ditto, if the race were at Oulton Park

Only once did he knowingly cheat: ostentatious column-changes matched to sleight-of-hand flicks of the overdrive switch to bamboozle a scrutineer into thinking that his Sunbeam-Talbot possessed a full complement of ratios – avoiding a penalty – at the 1954 Alpine Rally.

He liked nothing better than a tear-up, preferably against the odds, preferably at the wheel of a British car.

The 1950 RAC Tourist Trophy, in a howling gale, at the terrifying Dundrod, in a loaned Jaguar XK120 – after Jowett had refused him use of a Jupiter because of his tender age. Hah!

Racing Green’s first Grand Prix defeat of ‘those bloody red cars’ – at home, too – with Vanwall in 1957.

The maiden GP win for a garagista, in an underpowered privateer Cooper, on bald tyres, while wearing an eye patch – don’t ask! – in Argentina in 1958.

The 1959 Nürburgring 1000km charge – after co-driver Jack Fairman had somehow heaved their DBR1 from a ditch – that set up an unexpected world sports car title for Aston Martin. 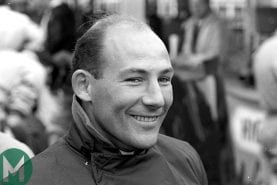 From his famous victory in the 1955 Mille Miglia to his irrepressible performance to win the 1961 Monaco Grand Prix, these are among Sir Stirling Moss' greatest races Although Moss…

And his fending off circling ‘Sharknose’ Ferraris for 100 laps of Monaco in 1961 – his Lotus’ side panels removed for the purposes of cooling, also providing a window into his world, a greater insight into its artistry.

Then there’s his: slinging an OSCA ‘tiddler’ to brake-less victory at Sebring in 1954; winning of the fastest Mille Miglia – on the longest ‘bog roll’ of pace-notes – in 1955; and back-to-back defeats of Juan Fangio in Maserati’s backyard – Pescara and Monza – in 1957.

Only Tazio Nuvolari – of like mind and build – matched him in terms of pulling off the impossible.

If it rained, chances are Moss would win. Ditto, if the race were at Oulton Park.

Single-seaters, sports cars, saloons and GTs: it was a win-win-win-win situation.

He was never world champion, never won at Le Mans – he was not a fan of La Sarthe in truth – and regretted never having competed at Indy, but it was as plain as a pikestaff that he was the best, once Fangio had retired. (By which time Moss was already the superior in two-seaters.)

And then it was snatched away in an inexplicable instant. 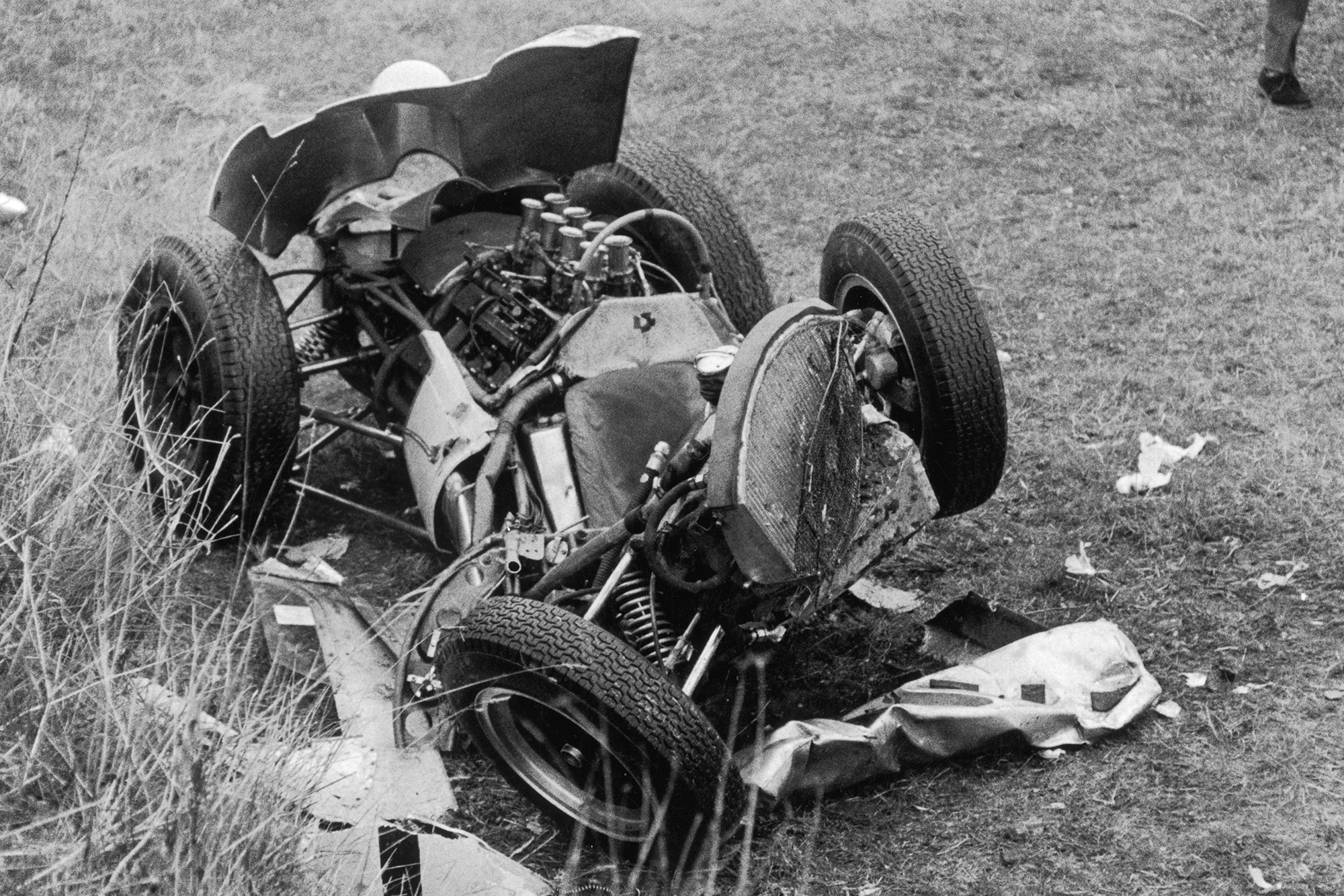 The remains of Moss’s Lotus

A toe-in-the-water test at Goodwood was arranged for May 1963 – too soon, as it turned out. That spare capacity had gone AWOL and Moss was marooned with us mere mortals.

He took it well, all things considered. He threw himself into a variety of businesses – some of them beyond reproach, others beneath him. 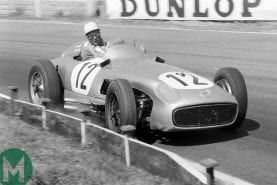 When Sir Stirling Moss drove on the track, he was there to race, not to eke out championship points. On Moss' 90th birthday, Simon Arron looks at the thrilling career…

And there was a time when his Bond-esque Mayfair home was a bachelor pad of global (verging on ill) repute – and he did begin to wonder if he was genetically incapable of love.

Then he met his third wife: marrying Susie was his smartest move.

With Lady Moss at his side, his career beyond the cockpit has been as fast-paced and arguably greater as the one from within.

He took leave of it a couple of years ago and we miss him – but understand.

Goodwood Revival paid tribute at the weekend, and he couldn’t be there – and it struck that perhaps none of it would have happened without him.

For he was the force-of-nature who inspired latent British ingenuity to build him winning machinery; who circled the Earth to spread the sport’s message; and who for more than half a century entertainingly engaged its present and future with its past.