Like a lot of people, I missed the news that Faye Pierson died last month in the Los Angeles suburb where she’d live most of her life. At the time of her passing, she was a ninetysomething great-grandmother, long removed from her glory days. But in her 20s, sporting an effervescent smile and the nickname Ladybug, she was one of the first international stars of the freshly minted sport of go-karting.

Pierson set a lap record, won a heat and finished second overall in the first-ever American Grand Nationals in 1959. She went on to race successfully in the Bahamas, Mexico, Italy and England, where her photo appeared on the front page of The Times. 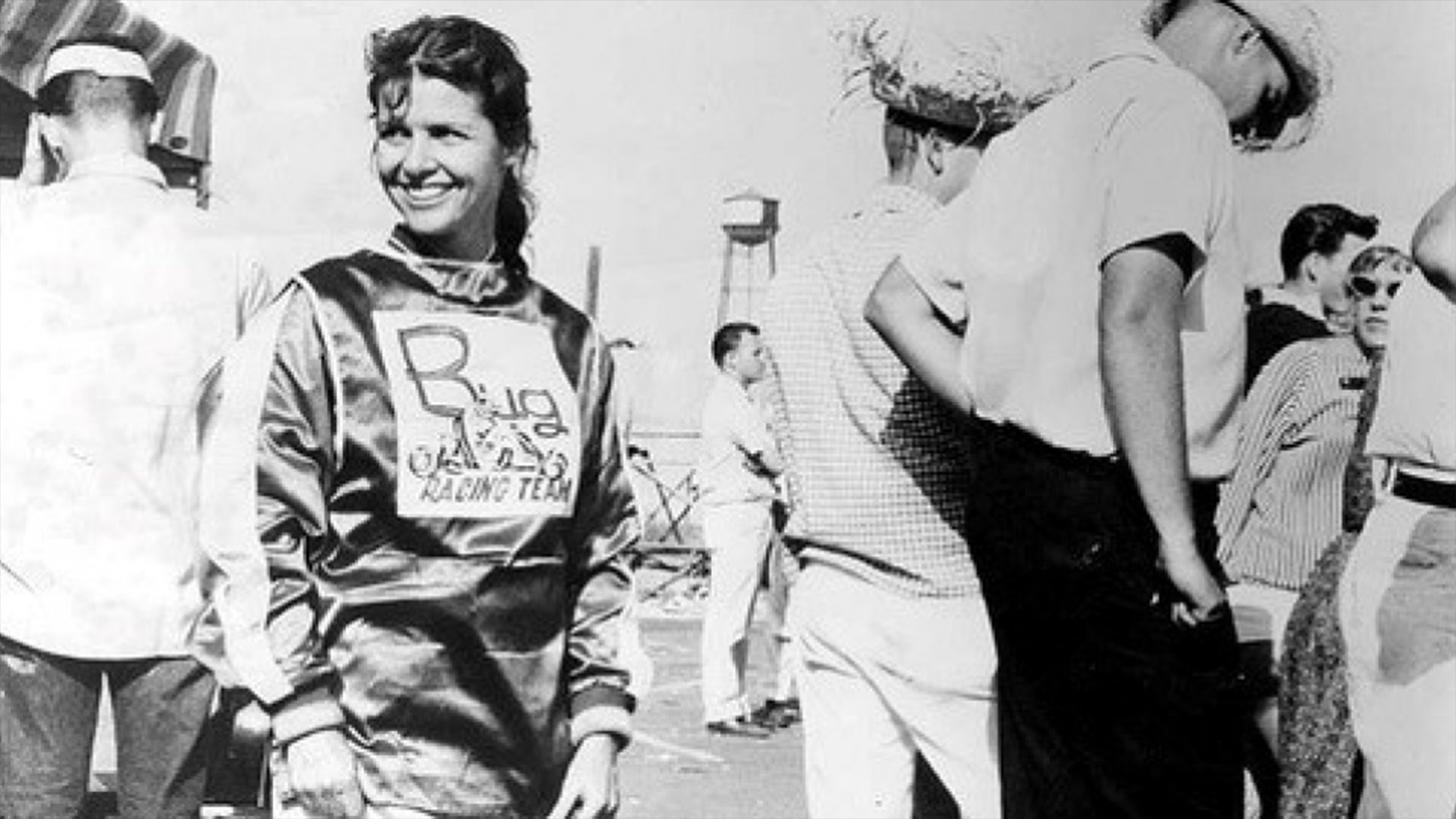 Of course, these were the early days of karting, long before anybody realized the nascent sport would become the first step on the ladder that now leads – if all goes according to plan – all the way to Formula 1. Back then, it was still a simple and pure diversion. What a contrast to the new forms of motor sport that have sprung up in recent years!

Consider, for example, the development of Formula E. Props to Alejandro Agag for coming up with the concept of electric race cars, the FIA for endorsing it and manufacturers for climbing on board. But despite oodles of publicity and racetracks shoehorned into some of the most exotic urban centres in the world, Formula E remains more popular with the powers that be than with, you know, actual race fans.

Last month, Agag and the FIA moved the concept off-road. Luminaries such as Nico Rosberg, Lewis Hamilton, Jenson Button, Carlos Sainz, Michael Andretti, Chip Ganassi and Zak Brown are participating in Extreme E, either as owners or drivers. Exactly why, I don’t know. Personally, the series strikes me as the answer to a question that nobody asked.

The celebrity quotient is even higher in Superstar Racing Experience (SRX), which NASCAR legends Tony Stewart and Ray Evernham are debuting this summer. The idea is to race high-horsepower, low-downforce cars on short ovals. Not a bad concept, though, for the record, it’s hardly novel. But most of the drivers are either retired (Willy T. Ribbs, Paul Tracy) or no longer ready for prime time (Tony Kanaan, Marco Andretti.) Which begs the question: WTF?

The thinking, I guess, is people want to see stars, and who cares about the quality of the racing? It’s just a show, after all, and making money is the name of the game. I get it. God knows, Formula 1 wouldn’t be where it is today if Bernie Ecclestone hadn’t figured out how to transform it from a sport into a business.

There were no sponsors behind the birth of karting. A marketing maven didn’t write a business plan, and celebrities were conspicuous by their absence. TV deals and broadcast rights? Nobody even had any idea what to call the go-kart when Art Ingels, a fabricator at the mighty Kurtis-Kraft shop in Glendale, California, built the first one in his garage in 1956.

Kurtis-Kraft was the nation’s top midget race car manufacturer, so Ingels naturally thought small. He welded Chromoly steel tubing into a pint-sized chassis and accessorized it with a 2.5-horsepower two-stroke lawn-mower engine. He took his mongrel to the Pomona Road Races, where it caught the attention of Duffy Livingstone, who raced a T-bucket roadster. After building a contraption of his own, Livingstone called Ingels and said: “Hey, why don’t we meet down at the Rose Bowl [parking lot], and we’ll have some fun?”

Although there was no formal racing at the Rose Bowl, a gargantuan football stadium in nearby Pasadena, the parking lot drew a growing cadre of rabid karters. Two of the most prominent hoonigans were Spencer Murray and Lynn Wineland, the editor and graphic designer of Rod & Custom magazine. Wineland came up with the name for the newfangled machines after rejecting possibilities such as “zip kart,” “fun kart” and “dart cart.” In November 1957, he and Murray collaborated on the first article about the emerging craze. 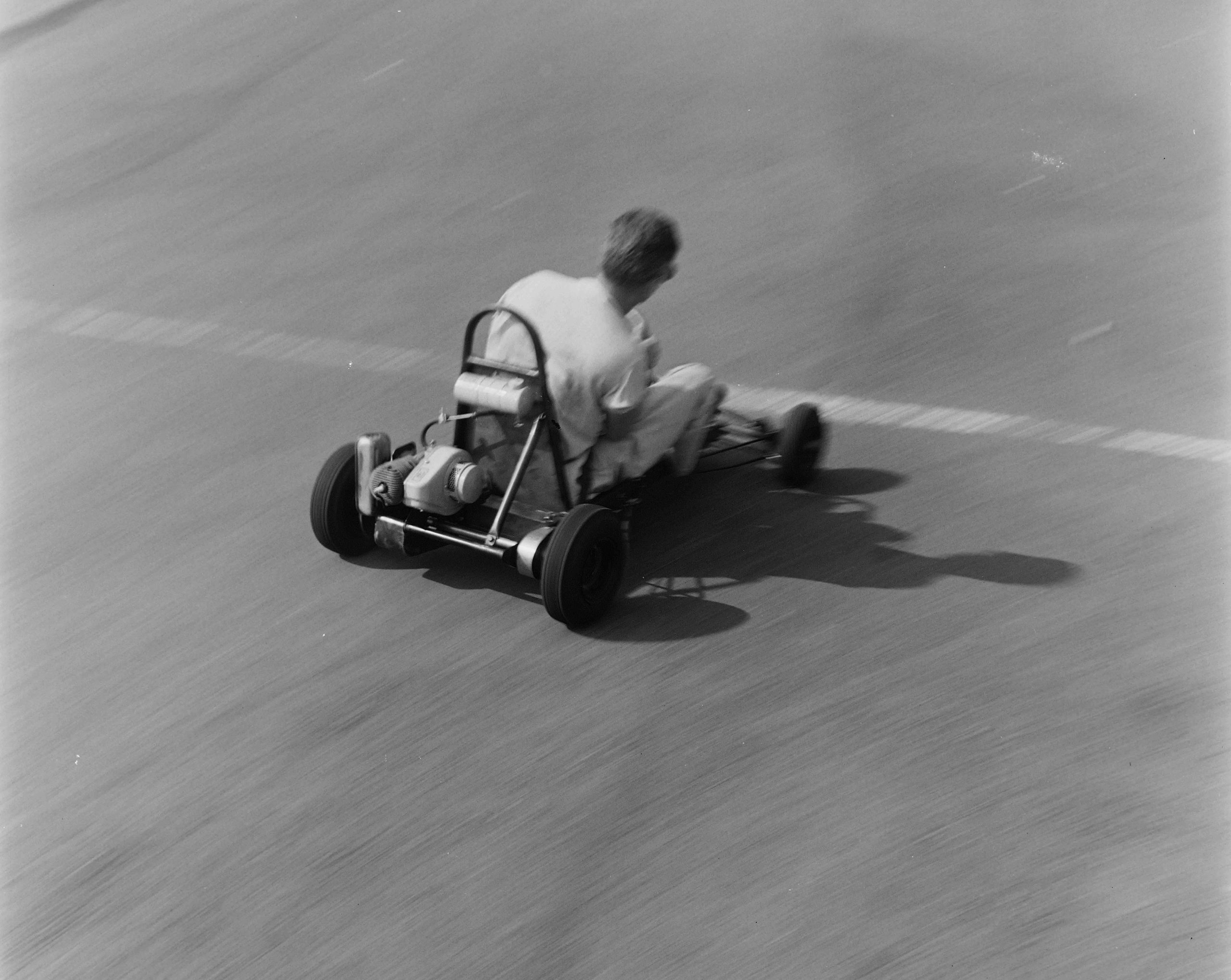 At the time, there were no more than 30 go-karts in the country. But after Livingstone started the Go Kart Manufacturing Company – “it may not go like a Ferrari,” the ad copy read, “but when you’re sitting 4 inches off the ground, it sure feels like one” – sales exploded. As the numbers increased, so did complaints from Pasadena residents. After getting booted from the Rose Bowl, the karters trooped over to the parking lot of the Eastland Shopping Center in nearby West Covina, where the first official races were held. 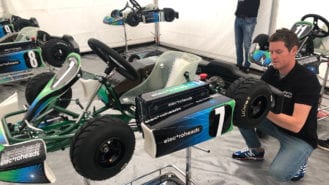 Electroheads: The low-cost kart series with Rob Smedley as a mentor

The road to grand prix racing usually begins in karts, but what if the experience of Formula 1 began at the very first step? That is now a reality with…

On Christmas Day in 1957, Pierson drove a neighbour’s newfangled Go Kart. “They couldn’t get me off of it,” she said many years later. “I’d never had so much fun in my life. You put your foot to the floor and, geez, it was just exhilarating!”

Shortly after this epiphany, Pierson and her husband, Tom, founded Bug Engineering, and they built their first kart from scratch in their garage. Bug later morphed into K&P Manufacturing, which was run by their sons until 2014. Pierson’s racing aspirations ended in 1962 with a nasty wreck in the Esses at Riverside International Raceway during a test in an Austin-Healey. But she was inducted into not one but two karting Halls of Fame, and the annual Faye Pierson Vintage Kart Reunion at Adams Motorsports Park in Riverside is named in her honour.

Today, karting remains the world’s most popular form of motor sport. Not because of a slick marketing campaign or a social media blitz but because nothing offers more bang for the buck. It’s a grass-roots activity that grew organically from the bottom up, not a top-down construct based on B2B opportunities and sponsor activation. So, long after Extreme E and SRX go the way of failed series like Fast Masters, Grand Prix Masters and the International Race of Champions, I suspect karting will still be going strong.