There was something wonderfully pure about Rally Finland last weekend. The scenery helped, certainly. The event’s signature forests looked stunning in glorious shades of green mixed with gold, as the break from the traditional summer slot to a later autumn date created a different backdrop and allowed fans to make a welcome return with the easing of pandemic restrictions. Beyond the breathtaking landscape, everything else about this spectacle stirred up the very best in feel-good motor sport, especially after a year’s enforced hiatus thanks to you-know-what for one of rallying’s ‘majors’.

In the refreshing but chilly clean autumn air, the World Rally Championship’s finest tackled the world’s fastest gravel special stages flat-out, from flag-down on Friday afternoon through to the Power Stage just after Sunday lunchtime.

Tyre strategy? There wasn’t any, because everyone chose Pirelli’s soft option throughout. The result was just down to who had prepared the best, who had managed the most test miles to hone a confidence-inspiring set-up – and who could ‘send it’ with the most commitment through the trees, across 178 enthralling stage miles. The fastest driver in the fastest car won the rally. Simple.

And that driver was Elfyn Evans, who claimed his fifth WRC event victory in a performance that I’d argue was a match not only for anything I’ve seen in motor sport this year, but in any sporting field. Well, perhaps Emma Raducanu’s incredible run to US Open glory tops it, but only because her rise was so out of the blue. Welshman Evans, in contrast, is a known quantity in his sport who has already shown his credentials to fight for world titles – but I’d argue his relentless performance on Rally Finland has taken him to the next level.

He won nine of the 19 special stages and it was the first, at the end of the Friday leg, that set the tone for what was to follow. The later date opened up the possibility of running Finland’s already daunting stages into darkness, and that had caught the drivers’ imagination. “Doing the stages in darkness is going to bring a whole new element,” said Hyundai’s Irish ace Craig Breen pre-event. “It’s something I’ve often thought about over the years, what would it be like to do a stage in Finland in darkness, and lo and behold we have it now. Oittila in the dark is going to be a big challenge. Only one run through it and we don’t even get a run through it before in daylight. You have to have the choke out and commit to your notes.”

Absolutely insane!🤯 Up to 190km/h on gravel roads in the dark!🌑🔦

“It’s quite a big difference even if you know the stage,” said Toyota Gazoo Racing’s Kalle Rovanperä, 21 on the day of the opening leg. “Here on a fast rally with a lot of crests and fast corners it’s not so easy to trust the notes in the dark because you cannot see everything, even with the really good lights we have on the car. Normally when we drive in the dark it’s winter time and you can see the light shining off the snow banks and it’s much brighter. But without any snow it will be proper dark.”

As predicted, Oittila on Friday night was other-wordly – on social media Daniel Ricciardo described onboard footage as “bloody awesome” – and Evans too was out of this world. Having shown a glimpse of his hand, he then won four stages on the bounce on Saturday morning to streak into a lead he wouldn’t lose, despite the best efforts of 2019 WRC king Ott Tänak who chased him hard into Sunday afternoon. But Evans won three of the final four stages, even keeping his foot in on the Power Stage to earn bonus points and ensure a maximum score for the weekend. He was almost faultless – and absolutely stunning.

Of course, the man himself wasn’t getting excited. Rally drivers are rarely effusive, and Gwyndaf’s boy looked mildly pleased having just conquered the event every one of his colleagues craves more than any – arguably including the Monte-Carlo Rally. Only when pushed did Elfyn admit this performance “probably ranks the highest” of his career so far, although his breakthrough victory on Rally GB in 2017 will always be hard to beat from an emotional standpoint because it was earned in his own backyard. Then again, let’s face it, winning in Finland was harder – especially as only one other British driver has managed it, in 70 years. Colin McRae or Richard Burns? No. Kris Meeke, in 2016.

The victory has set a new fire under Evans in terms of his title hopes. He’s now 24 points behind team-mate and seven-time world champion Sébastien Ogier with two rallies left to run. The maestro was strangely off form in Finland, finishing a distant fifth, while engine problems on the Power Stage even thwarted his bid for bonus points. But as he admitted, he can’t wait for what comes next, because the final rounds in Spain and at Monza are on asphalt – the surface he loves best. He’ll probably be champion again. But you never know. Evans has at least given himself a shot, and buoyed by the confidence Finland must instil he could give Ogier (not to mention their Toyota team) a bit of a headache.

The only shadow cast, at least for the drivers, was how Rally Finland marked the end of an era. It was the last gravel event for this generation of World Rally Cars, which are fire-breathing electronic marvels in comparison to the Rally1 hybrids that will be introduced in 2022. The extra 100bhp of powerboost from the new spec system might well be a “game-changer”, as Malcolm Wilson described it when M-Sport’s Ford Puma made its public debut at the Goodwood Festival of Speed in July – but the extra weight and further cost-cutting measures to strip away some of the ‘toys’, such as complex anti-lag systems, clever differentials, less sophisticated aerodynamics and reduced suspension travel, will likely make the cars slower. In Finland, it was all too obvious the drivers are already in mourning for what they are about to lose.

Understandably, most of them are careful what they say – although chopsy Belgian Thierry Neuville gave an impressive rant last month ahead of the Acropolis Rally, claiming Rally1 will make the cars “less exciting, more dangerous to drive and more expensive”, before adding no one “had the balls to take different decisions and go against what the FIA is deciding”. Don’t hold back, Thierry. But in Finland you could read between the lines when some of his colleagues hinted at their disappointment, without the vitriol. 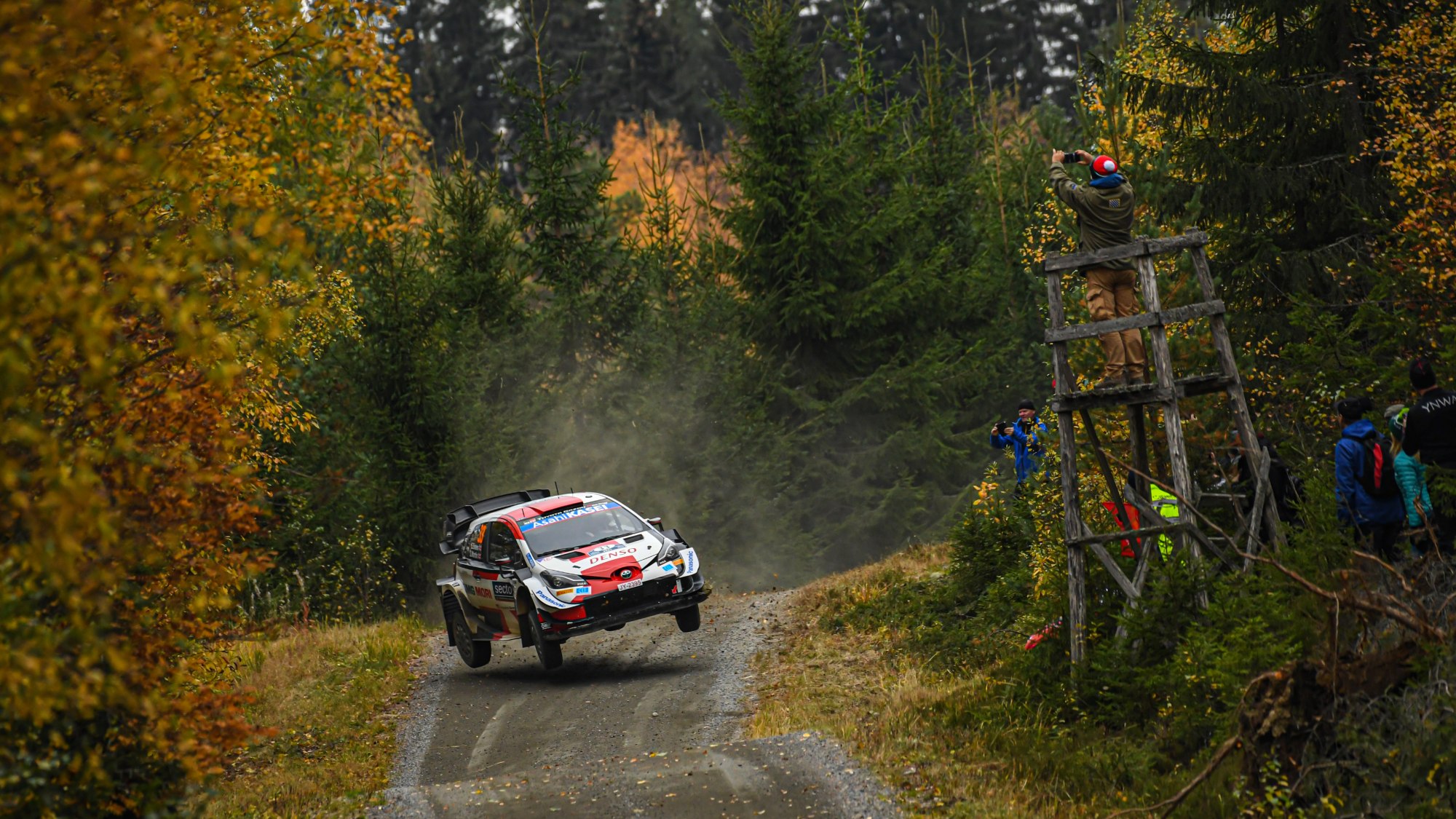 When asked in the pre-event press conference if there was some sadness that Rally Finland marked the end of an era, M-Sport’s Gus Greensmith said: “Mostly sadness, yeah. These cars are pretty good, pretty special. The new cars are also exciting but as a driver I don’t think it gets much better than what we are driving now.”

Then after the rally Evans was asked how it felt to win on these cars’ gravel swansong. “I think we are all pretty lucky to be here driving these cars now, I don’t know whether we’ll ever get a Rally Finland quite like this, with so much aero,” he said. “This style of driving, what we are going to now, is quite different, let’s say, for 2022. I think we should enjoy this now while we can.”

Breen was also reflective, his obvious regret mixed with the satisfaction of a job well down following his third place for Hyundai – a hat-trick of podium finishes in his limited 2021 campaign. “[The fans] all waited so long to get back to this rally and finally it was a possibility for spectators to be here, and it was amazing to see,” he said. “Last night in the forests, I think we will all agree… the stage on Friday night [Oitilla], but especially last night [Patajoki], just rattling down these forests at 200km/h [124mph], the little forest fires, the flags, the atmosphere, it was just absolutely incredible. What you can do with these cars I don’t think we’ll be able to do for a long, long time. I definitely enjoyed it.”

Change is often hard to take, and this one appears to have many in rallying worried. On the flip-side, the existential threat all motor sport faces under the cloud of climate change is particularly pertinent to a brand of motor sport that revels in sending cars popping and banging down country roads, throwing up dust and generally disrupting the peace and solitude of remote areas of outstanding natural beauty. We love it – but it’s easy to understand why many wouldn’t. In the context of everything we know about what is coming, rallying has to act, and should have done long before now. Without introducing hybrids and swallowing a sensible pill on costs, the WRC was heading for trouble – and still might be.

Those doubts about the future were another reason why Rally Finland was special, and so pure. The world is changing faster than motor sport can keep up. Even in dumbed down form for next year, let’s enjoy it when we can – and more importantly while we can.