Double WRC champion Carlos Sainz Sr has been announced as part of Audi’s new Dakar “dream team”, the German marque making a statement of intent as it attempts to become the first manufacturer to win the rally-raid classic with an electric prototype.

Teaming up with the Spaniard in 2022 will be the most successful Dakar driver of all time, Stéphane Peterhansel, plus two-time DTM title winner – and 2016 World Rallycross Champion – Mattias Ekström.

Sainz has won the Dakar himself three times before, most recently with Mini in 2020, but has now switched over to Audi. He campaigned for Volkswagen, which is owned by the same VAG corporation as Audi, between 2006 and 2011, emerging victorious in ’08 and ’10.

He already has experience of driving an electric off-road all-wheel-drive car. His own Acciona Sainz team runs a Spark Odyssey 21 E-SUV in new Extreme E championship.

Sainz spoke of his pride in driving for the Audi brand, particularly due to his love of the ’80s Group B rally era and the Audi Quattro S1. 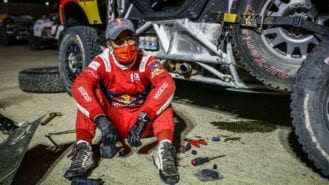 “I’m still hungry,” he said in an Instagram video. “If not I would not take the next challenge, which is to try to win the Dakar with Audi.

“The Audi Quattro time in the WRC is so special. I was following rally at that time. When Audi came with the Quattro it was a big, big thing.

“Today, to be part of the Audi brand, it means a lot to me – I’m very proud. Doing something, which in a way, will be similar to the Audi Quattro [the first four-wheel drive WRC car], because it was the first time, and this is going to be the first time that Audi try to win the Dakar with electric power.”

He added in the post, “I hope they let me drive the Quattro S1.”

Audi’s Dakar prototype will be driven entirely by electric power, using motor generator units (MGUs) from its Formula E car. It will also be fitted with the petrol engine from its DTM racers, which will be used to charge the batteries on stages that are longer than the car’s range.

It will be taking on conventionally-powered rivals Toyota and Mini, who will carry on competing in Dakar, as well the Prodrive-run Bahrain Raid Xtreme team, campaigning its own prototype with Sébastien Loeb.

Managing Director of Audi Sport GmbH, Julius Seebach, emphasised that line-up highlights how serious the manufacturer is in its debut Dakar effort.

“It’s no exaggeration to speak of a ‘dream team’,” he said. “Stéphane is the most successful Dakar driver of all time. Carlos is a multiple Dakar winner and World Rally champion. With Mattias, we already celebrated many Audi successes in the past. He is one of the world’s most versatile drivers. In addition to a lot of speed, they are all adding an extreme amount of expertise and motivation to our team. The same goes for their co-drivers, who play an increasingly important role in the Dakar Rally.”