The Peking to Paris rally is a gruelling test through the heart of Asia and beyond, which can trace its roots to the early 20th century and is made up of over 100 historic cars. Here’s the story of the latest event 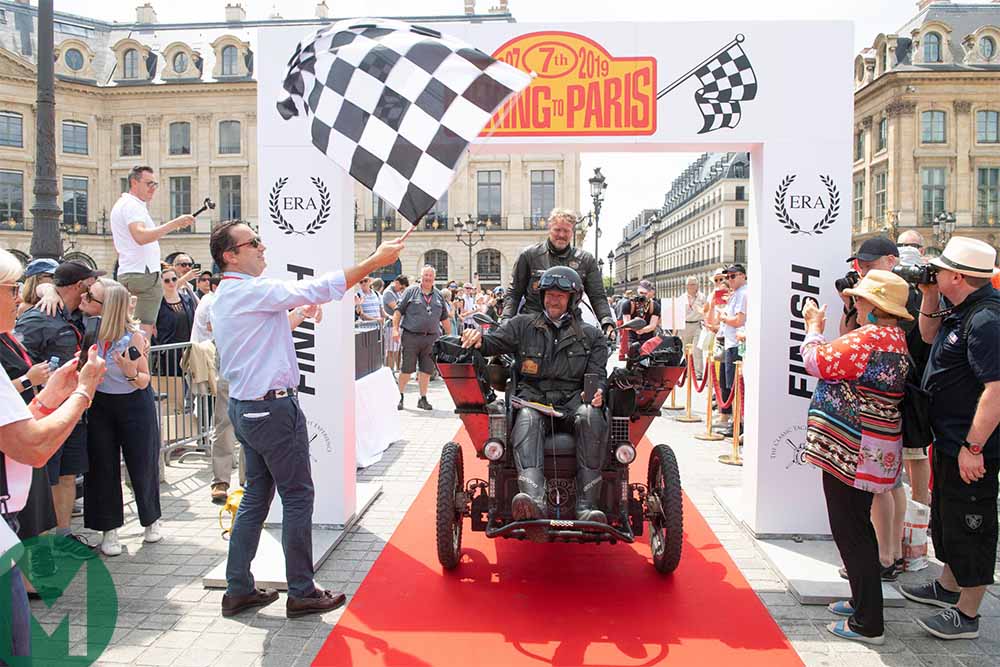 Anton Gonnissen and Herman Gelan make the finish in their Contal Mototri, something Auguste Pons failed to do in the original event 112 years before Photo: HERO Events

You could say that adventure and exploration are part of the human condition, a deep-seated yearning to emerge from the cave and find something outside of our four walls of existence, to test ourselves and put oneself outside of one’s comfort zone.

These days however with our quickly shrinking world it is perhaps harder than ever to unleash our inner Christopher Columbus or Ranulph Fiennes, indeed with all of the recent celebrations of the Apollo’s golden anniversary, one could be forgiven for thinking that the only great adventure that remains is to leave the cradle of the Earth and explore space.

That is not strictly true however, and despite our globe seemingly endlessly connected these days there are still remote regions; still areas where meeker, self-sufficient societies exist and, crucially, where adventure can be had.

It will be a difficult, dangerous and compelling journey, but for all the hardships that it throws up, it will be both life-affirming and exhilarating

One of these last great adventures is the Peking to Paris Motor Challenge, an 8500-mile, 13,680km stomp across the world’s largest land mass, travelling in classic and vintage cars in an ode to one of the world’s first great automobile tests, an automobile which has consequently and somewhat ironically led to the world becoming a smaller place.

June and July witnessed the seventh, and most recent, running of this escapade, and just like the first edition in 1907 the journey is not for the faint of heart.

Much has changed since that first challenge, way back at the start of the 20th century when the motorcar was still a burgeoning mode of transport. Just five intrepid crews answered the call to the challenge issued in French newspaper Le Matin, that asked:

“What needs to be proved today is that as long as a man has a car, he can do anything and go anywhere. Is there anyone who will undertake to travel this summer from Peking to Paris by automobile?”

Out of the five that began what was to be a two-month epic, just four finished, with the Contal Mototri of Auguste Pons being lost to the sands of the Gobi Desert, which but for a miracle would have consumed Pons himself.

Prince Borghese won the magnum of champagne that was offered to the winner of the challenge, but just like Pons, that is all history now.

Back to the present and the 2019 event became one that at its conclusion the competitors were calling the ‘toughest yet’, which is quite an accomplishment in our ever more sanitised world and goes some way to ratifying its claim to be the toughest endurance rally in the world.

One hundred and three two-person crews began in the shadow of the Great Wall of China, 31 of those pairs in vintage machinery, all with the same goal of the finish at Place Vendôme in Paris, 36 days later.

While the teams left to much fanfare and celebration, surrounded by loved ones and spectators, it would not be long before they were entrenched in the wastes of the Gobi Desert and getting their first experiences of the long days and solitude to come. 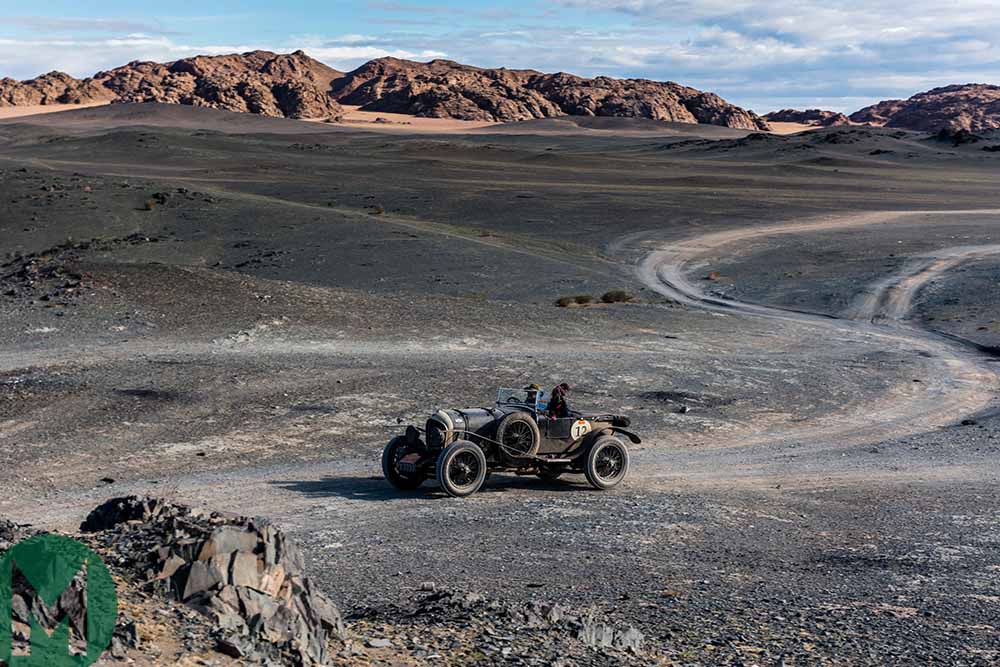 Leading the rally away in China was the unusual-looking Contal Mototri mounted by Dakar veteran Anton Gonnissen and, perched precariously at the front of the contraption, his navigator Herman Gelan.

Attempting to exorcise the ghost of Auguste Pons, by completing what Pons didn’t manage in 1907, they took to the route in a 112-year-old sister machine completely unsuitable for the conditions, but through sheer grit and determination would make the end in Paris.

Another pair taking part in a machine that on the face of it was completely unsuitable for this kind of event, were American Mitch Gross and his navigator Christopher Rolph, driving in a 1910 White MM Pullman, an automobile powered by steam.

Their rally would be longer than most, with the slower than average speed increasing the length of their days considerably. Come the finish, not only had they completed the distance, but most likely set a distance record for a machine of this type, despite having to completely rebuild the boiler furnace three times along the route.

Drive. Eat. Sleep. Repeat. A mantra that anyone who has ever experienced an endurance rally of any kind will know well, but to suggest that there is any sort of extended monotony about the Peking to Paris would be to do it a tremendous disservice, for save for the vast transit legs through Russia, when many kilometres are ticked off each day, the rally leaves little time for boredom. 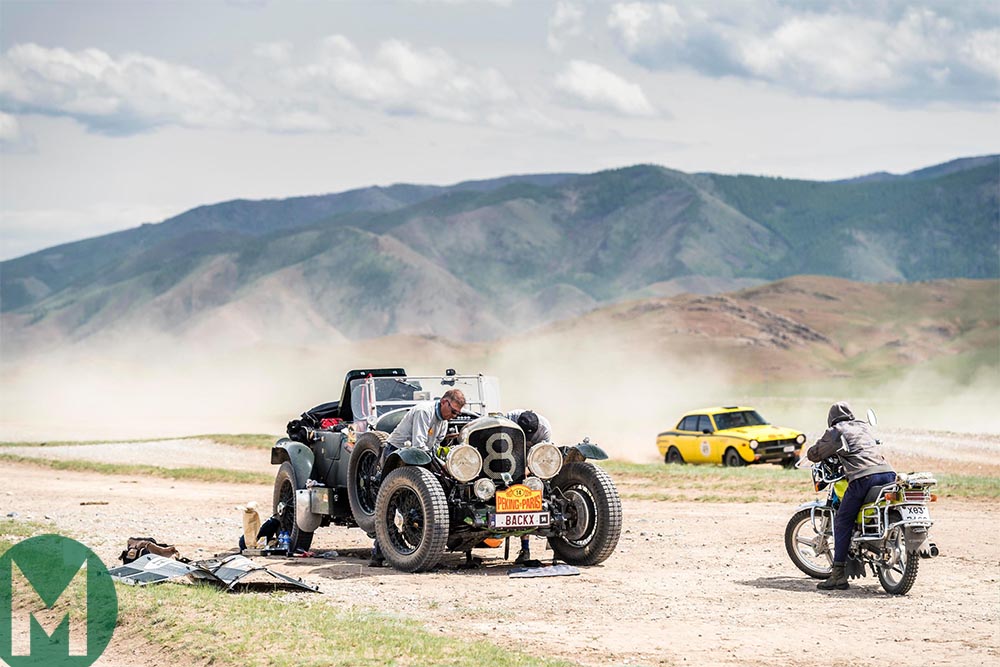 Once the Chinese border had been cleared and the trials of the Gobi were behind the teams, the vast plains and tough roads of Mongolia awaited the explorers.

Some 1500 miles of remote travels through the domain of the horse-mounted nomads awaited, and the mantra of the endurance driver would be peppered with interjections of near-impassable routes, death-defying river crossings, navigational tests and mechanical challenges.

The latter became par for the course as crews turned into their makeshift camps for the night, and indeed across the entire journey everything from oil leaks, engine blow-ups, brake issues and suspension failures would be nursed and fixed at the rest stops, sometimes with ingenious engineering solutions provided by local mechanics, straight from the Heath Robinson back catalogue.

In fact, often the fix was easy, it was finding workshops in the settlements on route with the facilities to keep the cars on the road, not to mention the language barrier, that proved the tougher challenge.

But then this is all part of the challenge, this is one of the very attractions of the rally in the first place. Aside from the endurance aspects of the event, one of the other main draws to put yourself through something this difficult is the roads and the breathtaking scenery provided by some of the most untouched and unspoilt places on the planet.

Through China, Mongolia, Eastern Russia and Kazakhstan, edition after edition of this rally showcases landscapes whose beauty is superfluous to superlatives, the right words just do not exist.

Each day is like being in the middle of the National Geographic’s greatest hits and this kind of experience keeps those who have been lucky enough to suffer the magic of the Peking to Paris to become completely entranced by its spell.

“It will change your life,” says Peking to Paris and rally veteran Bill Cleyndert, a summary that perhaps only scratches the surface of the effect that this rally can have on you. He’s competed in three now, in both the drivers and the navigator’s seat. 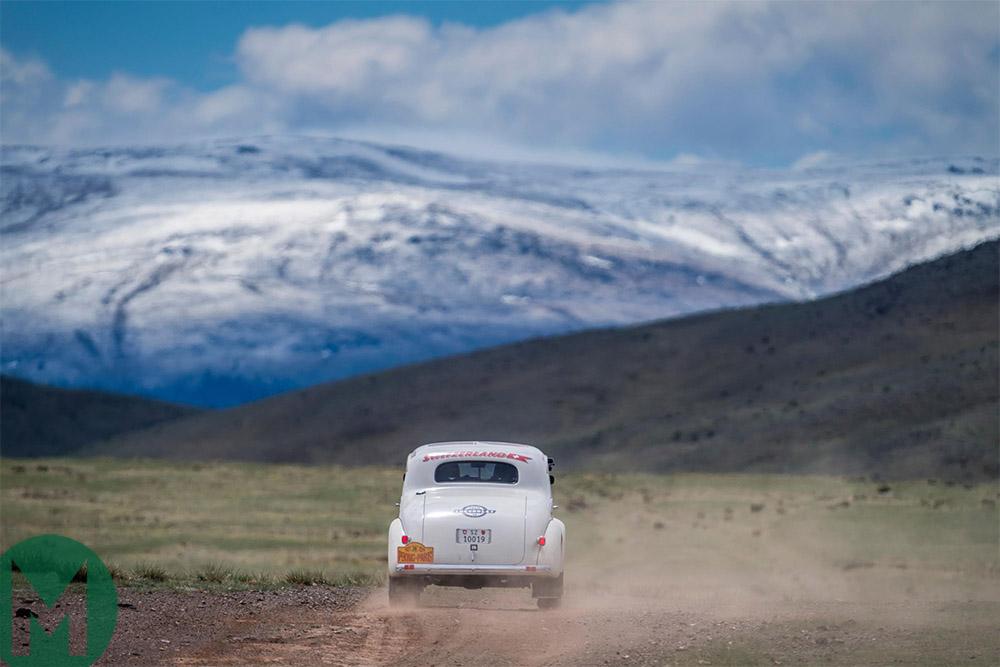 Another veteran is Aussie Gerry Crown, who has taken part in all the modern editions of the event, winning three of them including this year’s. He’s 87 now and despite the harsh conditions and relentless pace proves that experience, and not necessarily youth, is key to doing well on this rally.

It isn’t really about winning the thing though, surviving and completing it is what really matters to everyone involved and is a stunning achievement wherever your number ends up on the results sheet.

Some will want to win it of course, many will have their own personal goals or reasons for taking part, but for now all those that did take to the start in Beijing in what probably feels like a lifetime ago, have a three-year wait before they can do it all over again, when the rally enters its eighth edition in 2022.

Who knows what the next edition will throw up, what is for certain is that it will be a difficult, dangerous and compelling journey, but for all the hardships, it will be both life-affirming and exhilarating.

There aren’t many true adventures left on this planet, but the Peking to Paris is surely one of them.

Will Broadhead is Media Manager at HERO Events. The Endurance Rally Association which organises the Peking to Paris rally is part of the HERO group. 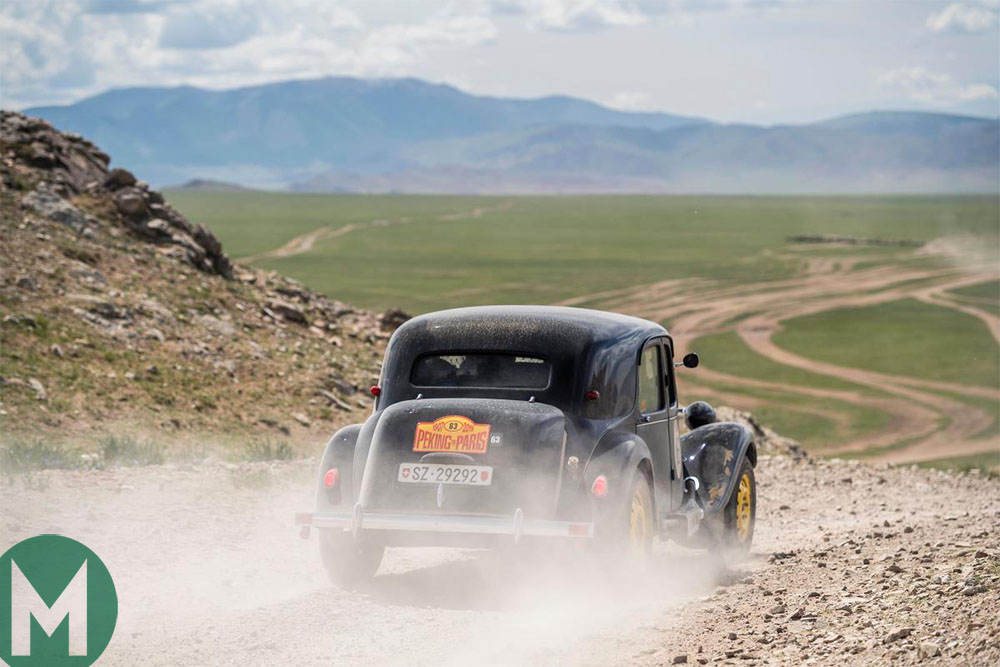