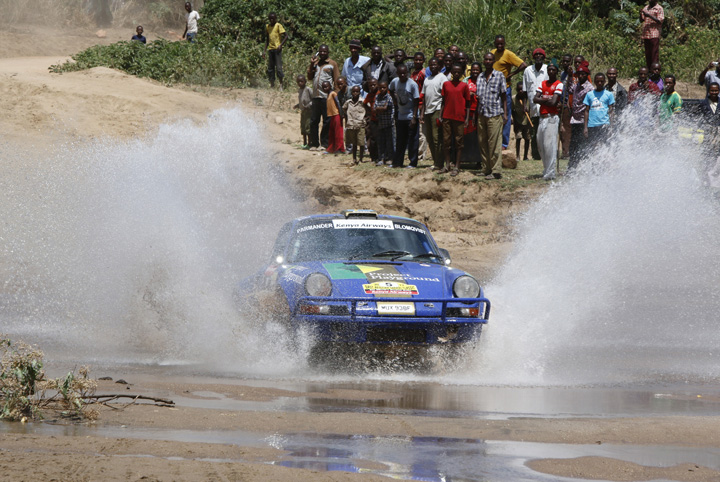 Over 1200 miles of competitive sections await competitors in the East African Safari Classic Rally, which starts in Mombasa on Thursday (19 November). The biennial event is probably the toughest of all on the historic rallying calendar as it re-creates the famous Safaris from a time when Africa hosted a round of the World Rally Championship.

In eight days of competition, with a single rest day in the middle, crews will tackle 24 competitive sections with the longest at a staggering 96 miles. These are roads that are not closed to other traffic, and in the Safari tradition crews can expect to encounter trucks, locals, animals and much more. The route narrative includes warnings of river crossings, mud holes, hidden culverts, elephants and other wild animals and urges crews to temper their speed through Masai villages. On some sections, crews are directed to stay with the car should it break down, as the local wildlife can be fearsome.

From Mombasa, the route runs in Kenya and Tanzania and the organisers say that 80% of the route is new to the rally. The daunting schedule is a punishing challenge for man and machine and the single rest day is sandwiched by two runs of four long days in the car. The onset of the traditional rainy season simply adds to the demands of this rally and can lead to treacherous river crossings, monstrous mud holes and sections of road washed away by flash floods.

Twice winner Ian Duncan will head 52 starters in his Ford Capri RS3100 and will be followed by the Porsche 911s of Gregoire de Mevius and 1984 World Rally Champion Stig Blomqvist. Duncan’s plans to run his Capri in ‘Perana’ specification started a long eligibility wrangle, but he has now switched the car to RS3100 trim in order to contest his home event.

Both of the leading Porsches are co-driven by current WRC co-drivers. Alongside de Mevius will be Nicolas Gilsoul, usually found partnering Thierry Neuville in the works Hyundai. Blomqvist, an ace at this type of event despite his 69 years, is partnered by Stephane Prevot who arrived in Kenya fresh from co-driving rising French star Stephane Lefebvre to eighth place on last weekend’s Wales Rally GB.

Top seeded UK driver is regular Safari contender John Lloyd in an Escort Mk2 from the Viking Motorsport stable of Phil Mills. Meanwhile, all-British crew Andrew Siddall and Carl Williamson will bid for a top 10 finish on the event after finishing 11th overall on the last edition in 2013. Their Dansport-prepared Datsun 260Z finished fourth overall on Rally Morocco Historique earlier this year and will start as car 12 on Thursday morning.

Straight from driving the Volvo ‘zero’ car on Wales Rally GB, Ryan Champion flew to Africa on Monday to prepare for the Safari Classic, trading the rain of Wales for expected rain in Africa. The experienced Yorkshire driver is again partnering experienced competitor Richard Jackson in a Porsche 911 from the Tuthill team. They are starting as car 25 and will share driving duties on the marathon event.