Audi is used to ripping up the rulebook on received motor sport knowledge. To be frank, in sporting terms, it’s almost all the German automotive behemoth knows.

The first manufacturer to use four-wheel drive in the WRC, its Quattro brought about a revolution in rallying, winning a quartet of world titles between 1982 and ’84.

Fast forward just over twenty years, and its pioneering diesel-powered RD10 TDI sports car prototype claimed the 2006 Le Mans at the first attempt. Then it did it again the next two years.

Now the German marque fancies another challenge – one which Q Motorsport boss Sven Quandt (running the team for Audi) admitted was the most complicated technology-wise it has ever taken on: winning the formidable Dakar Rally with an electric vehicle.

The tool for task is currently not without its flaws, having been produced in just 15 months from concept to competition, but the electric-driven RS Q e-tron is still breathtaking in appearance and performance.

It has now hit the team’s first target, with all three cars making it through the first week of the event. For something that didn’t exist even as a drawing a year and half ago, that’s pretty impressive. 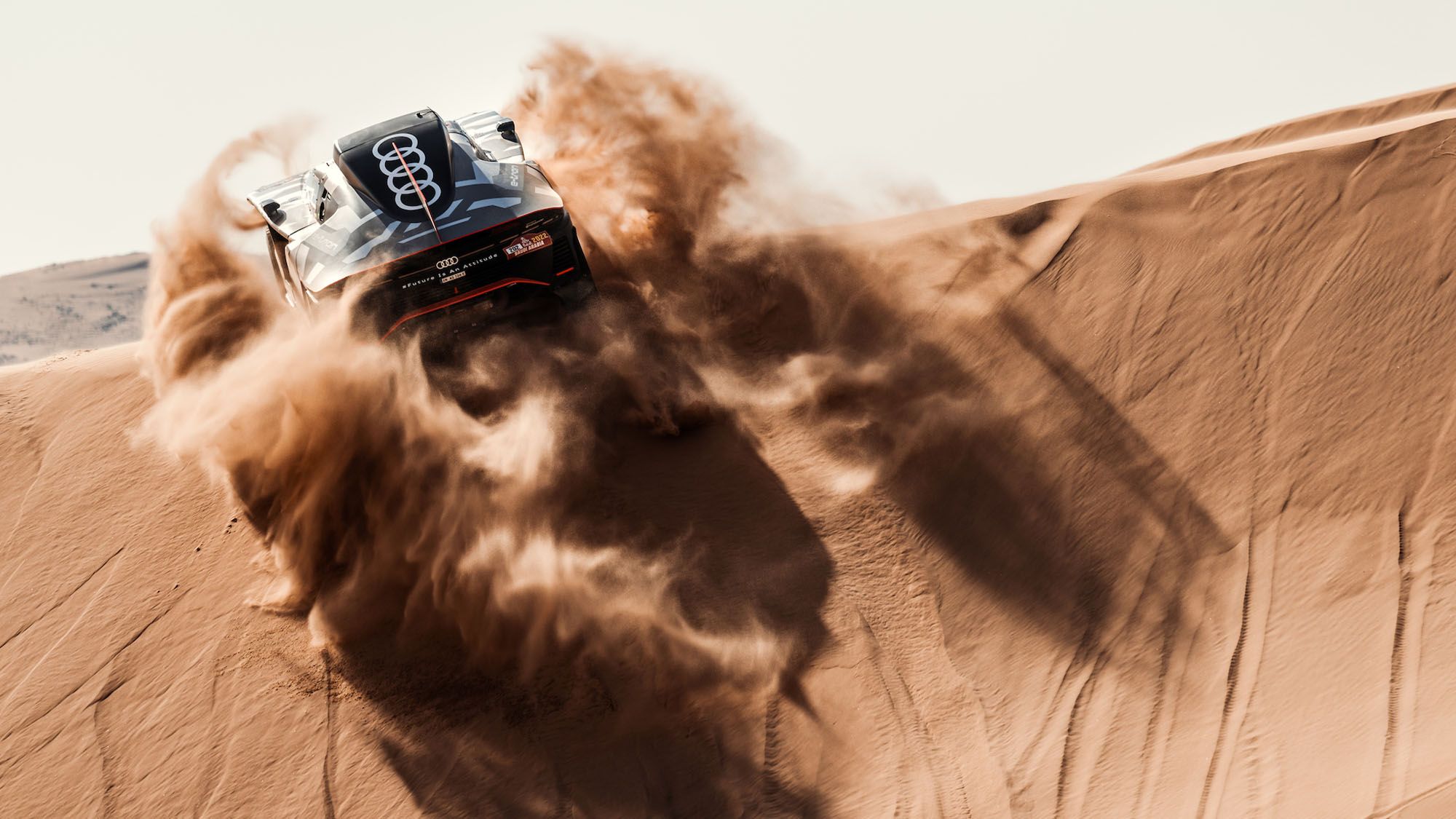 It’s all part of Dakar’s plan to have all cars and trucks running alternative drivetrains and producing zero emissions by 2030. Right now, there’s an ‘alternative energy’ Dakar class which the Audi is ostensibly part of, as well as being in the Cars category. This car is the latest stage in the German marque’s plan to go fully electric in this rally and on the road in the future, with internal combustion engine development stopping beyond 2026.

A formidable, dark, hulking form with a huge cooling air intake on the roof, the e-tron is powered by two electric motor-generator units (MGUs), one at the front and one at the rear axle, from its 2017 Formula E single-seater. They produce that familiar FE whir as the car launches off the start-line at Dakar. The power output is restricted by Dakar rule-makers to 392bhp (292kW) – it could pump out 680bhp (507kW) if it were allowed to run at full pelt. It can do 0 to 100km/h (62mph) in 4.5sec – on loose surfaces. Not bad.

The MGUs take their power from high-voltage 52kWh lithium-ion battery – designed from scratch by Audi – weighing a hefty 370kg.

This was where the main worry came in: “Designing a car in 12 months is one thing,” says Dreyer. “But we were worried that battery wouldn’t be ready in time.”

Here the electrified vision falls down for now. Although the car harvests some kinetic energy from its brakes, its battery isn’t efficient enough to power it throughout the average Dakar stage distance of 211 miles.

“We all know that the normal batteries are not able to do that in the desert,” says Dreyer. “That’s when this team came up with this idea to how to charge the battery in between and I think that was really cool.”

So what is the solution? Stick a large internal combustion engine in it, of course. A 2-litre, four cylinder TFSI DTM chugs away – going through a third MGU acting as generator – to recharge the batteries when low on power. Of course, that means fuel is being burnt, so despite being an ‘electric’ car, the e-tron’s emissions aren’t inconsiderable.

Bringing a power unit designed for Germany’s billiard table-smooth (in comparison) circuits to the Saudi desert, has been a headache for the design team. 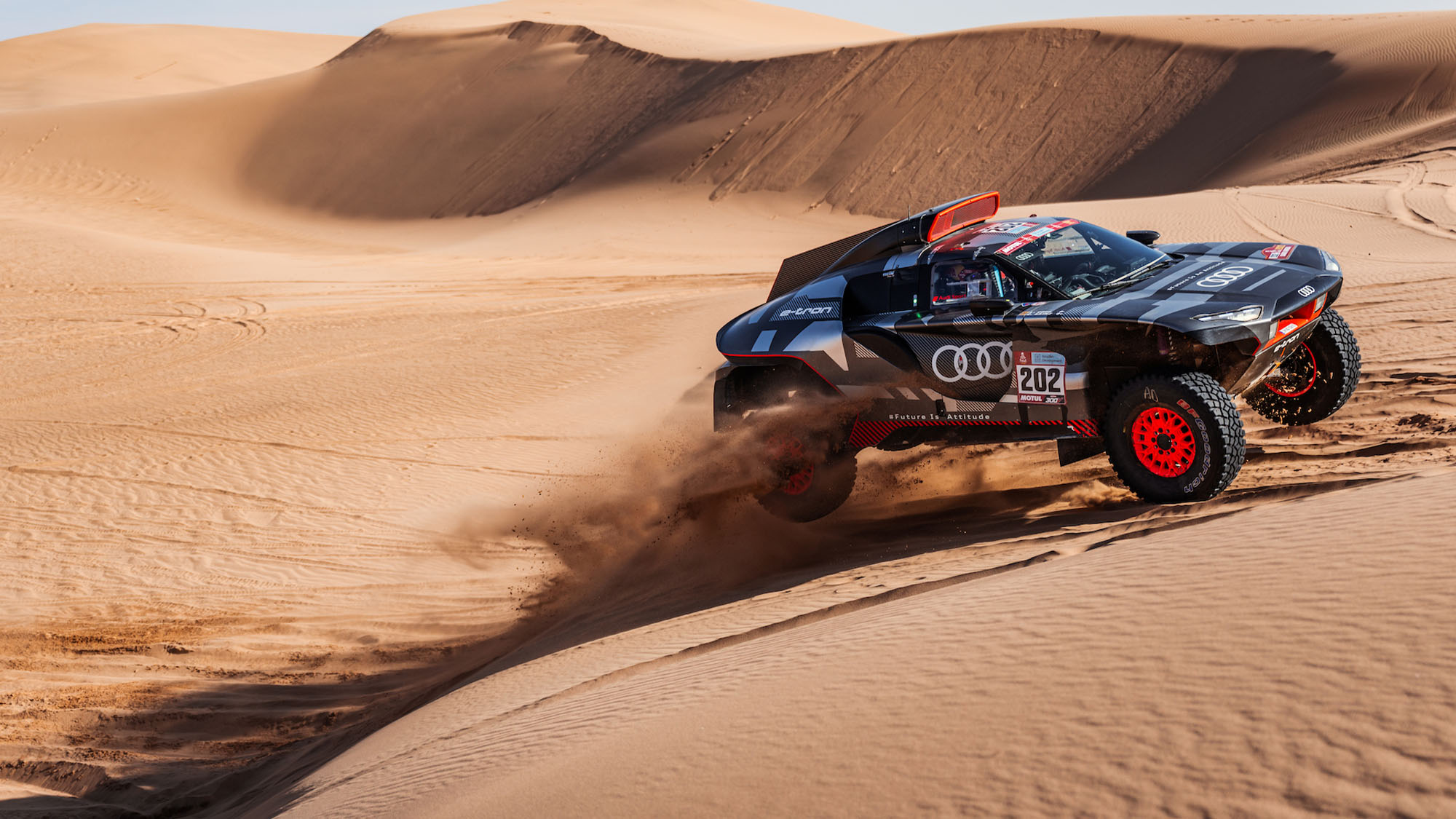 “The components of the drivetrain were basically not developed for this particular application,” says Dreyer. “It’s a big challenge to make sure that those components can hold up to these loads.”

With the DTM engine essentially acting as a range extender, some Dakar paddock naysayers assert this means the car isn’t efficient enough. Audi says there simply aren’t enough charging points in the desert — an issue that doesn’t seem likely to be rectified soon.

Motor Sport witnessed the e-tron flying through a dune-heavy stage end first hand, the electric whir accompanied by the throaty moan of the DTM engine, sounding something like a cross between the fan-powered Chapparal 2J and a Henry vacuum cleaner.

The car has a single speed gearbox, ergo no paddle shift or gear lever is required. Whilst this may seem unnatural to some used to the natural steps of a sequential shifter, Audi’s star driver Carlos Sainz told Motor Sport it was something that’s actually helped him attack the stages – proved by him taking a momentous first stage win for an EV on the third day.

“You only concentrate on the [driving] line, you don’t need to concentrate on which gear you are,” the rally legend said. “You have always an immediate response, which is welcome in the dunes!”

Sainz is also enjoying the feel of the brake by wire system, which features the kinetic regeneration system, saying he enjoys both the durability and exacting nature of the Audi’s stoppers.

“The braking is really good too, for the first time working with that,” he said. “I really like it.

“The regen gives you a very consistent braking – apart from [using] the [normal] discs you always have the same feeling with the pedal, the same amount of braking.

“It’s much more consistent, because when you put in new discs you have a very good bite, but it’s always decreasing. With this it’s always the same bite.” 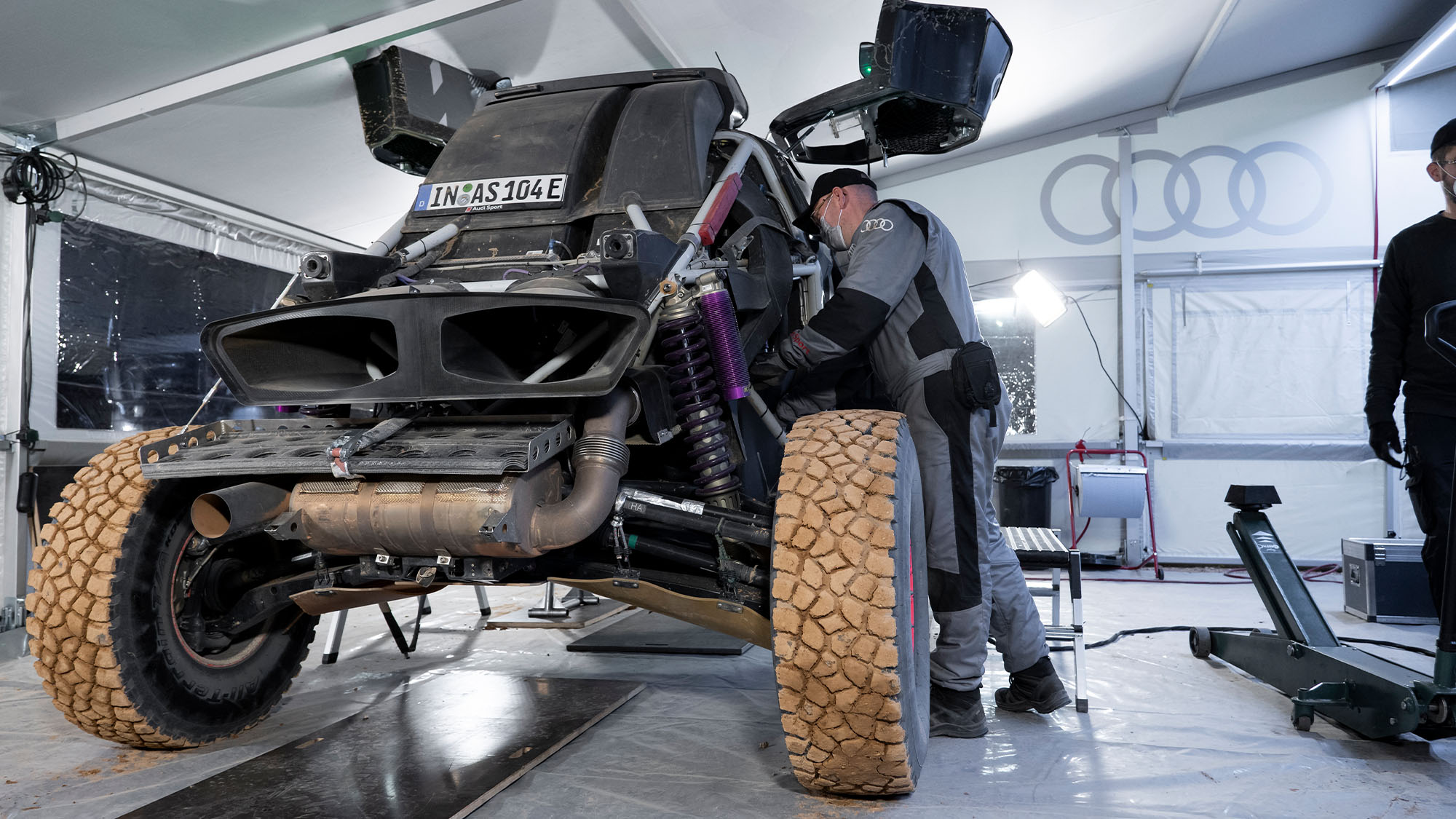 Under the skin in the pits

That aforementioned unforgiving desert landscape, a combination of sizeable rocks and deceptive shifting sands, hasn’t exactly been kind to the Audi though, in particular Sainz’s No202 car.

The hybrid system, which features around 150 million lines of software code, was expected to provide the team with trouble but has run smoothly. It has actually been mechanical issues which have beset its Dakar debut efforts, most specifically the car’s dampers. Sainz managed to break two in two stages (five and six) and had a bearing issue which lost him first place on the fourth stage.

“We managed reliability on paper, not in reality. Everyone knows that is No1 to win Dakar” said Sven Quandt ruefully, during a press conference in which somewhat ironically his microphone battery died, him and Dreyer having to conduct the rest of the address by talking a bit louder. 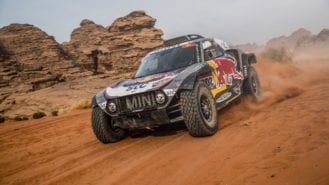 A small contributor to these problems is the weight of the car. Currently running at 2,200kg, the car is 200kg over the minimum weight in its class. Both team and drivers have protested, claiming they’re being penalised and that the limit should be raised, so competitors would have to add ballast. So far the Dakar organiser has refused to be moved on the matter.

Sainz, one particularly vocal member on this subject, believes it’s an area which could help the team greatly if addressed.

“You feel it – a lot,” he says. “Every bump every corner. I told the team it’s like carrying two engineers with us!”

It was put to Sainz that these weight issues are causing the reliability problems, but he wasn’t entirely on board with the idea, pointing to the brevity of the cars birthing.

“A little, but the damper should be fixed, that’s what I understand,” he said.

“Of course, the weight doesn’t help, but they (the team) knew certain parts were on the limit.

“I see signs of a bright future, because if we can put the weight down, it really would be a very good help.” 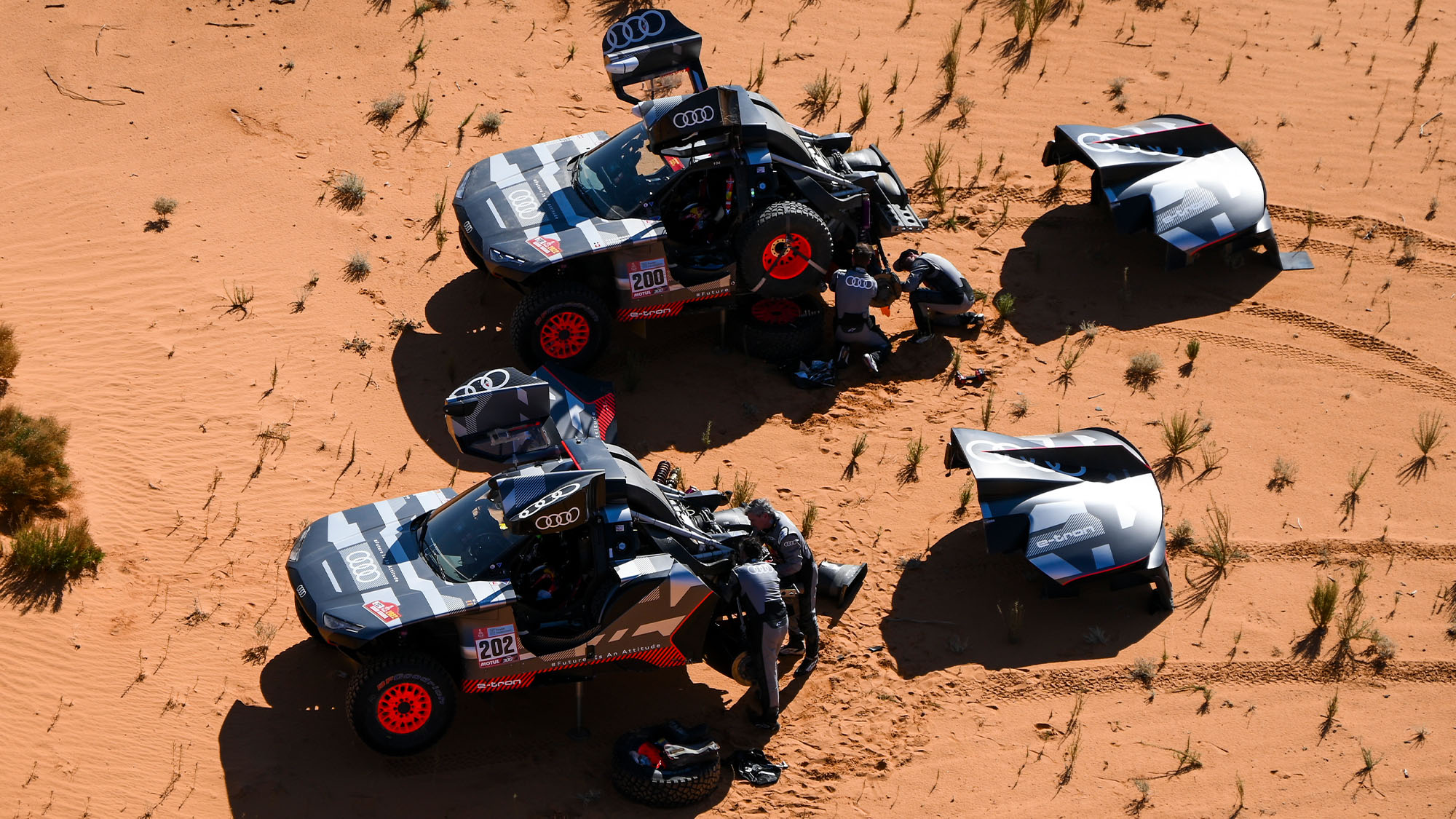 However, for a car which has 6000 separate parts and has never been driven in competition, it’s not doing too badly.

Sainz’s win and Ekstrom’s on Stage 8 today show the car has some serious raw speed. If Audi was allowed to run lighter (or found other ways to reduce the weight) then the other competitors should be seriously worried. Sainz also managed to finish the stage on day four at racing speeds with just electricity when his petrol engine ran out of fuel.

Even compared to other Dakar challengers such as the Prodrive BRX Hunter and Toyota Hilux, the e-tron gives the impression of hugeness. The car is 4.3 metres long, and 2.3 metres wide, has the greatest width of any car Audi has ever produced for the road or competition.

With bodywork designed by Dario Tomorad and overseen by Juan Manuel Diaz, the car certainly stands out from the crowd, of course not missing out at any stage to point to influences from the road cars it sells in the showroom. 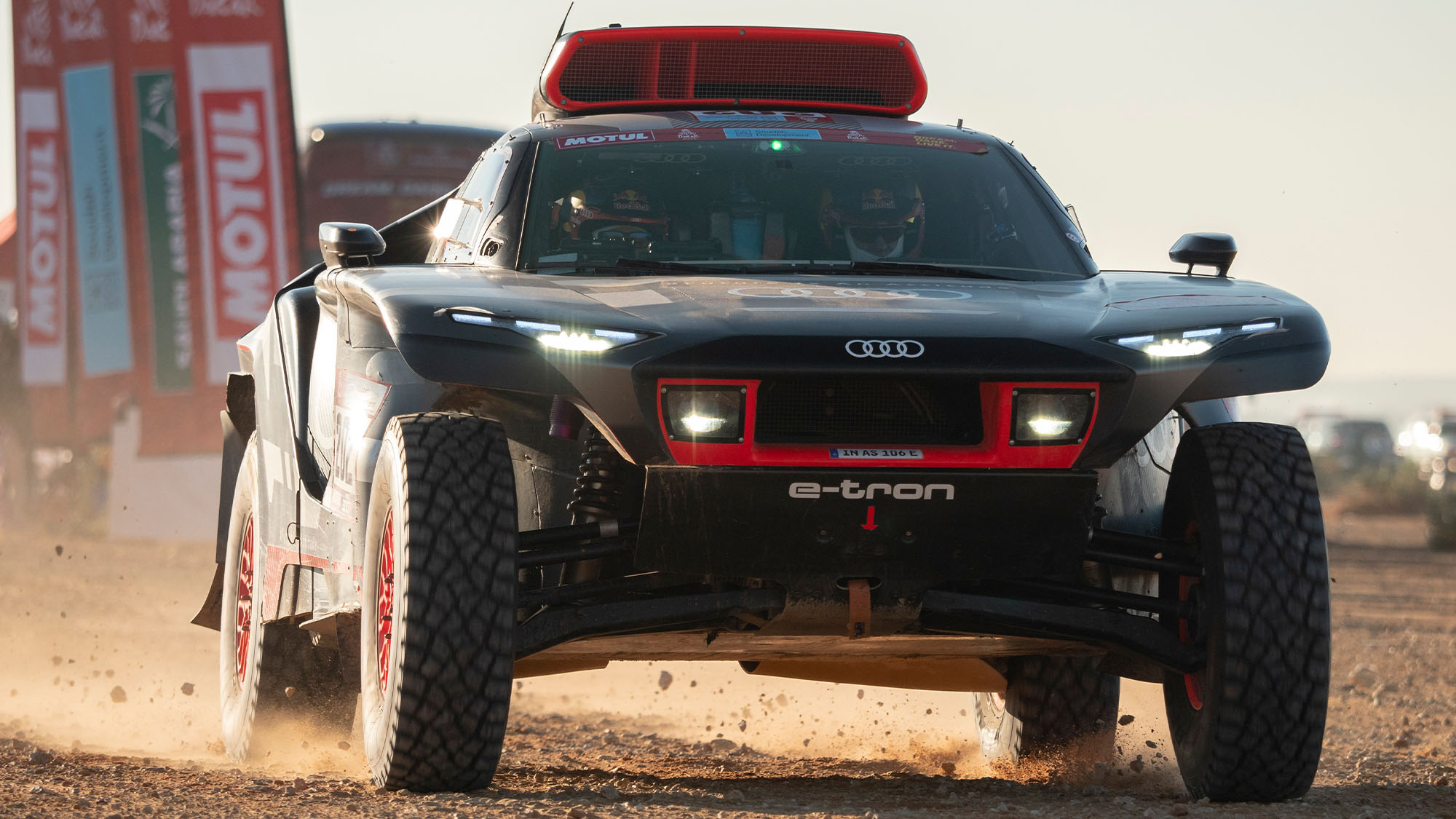 A new dawn for Audi in motor sport

“Most of the cars in the Dakar Rally are rather boxy,” Tomorad says. “We have a coupe-like silhouette, similar to the e-tron Sportback and we’ve taken inspiration from our unique motorsport history.”

Whilst Audi claims the design also borrows from its WRC and Le Mans winners, it’s also keen to highlight that the spaces on either side made to house spare wheels are also apparently similar to the wings found on its R8.

Underneath the carbon composite bodywork and a 54mm thick underbody – plus dark camouflage paint job created by Marcos Santos –  is a tubular frame with various carbon plates inserted around the car components for strengthening.

Quandt highlighted that the chassis was one area Audi got right straight from the start.

“I have developed many cars in my life,” says Quandt. “This is the only car which I can tell you where after 8500 kilometres we didn’t have to correct any area of the chassis.

“I can tell you, whoever I know who has won the Dakar, everybody had to weld the chassis [at some point] even during the test.”

“The car is extremely stiff and extremely good for from a safety aspect as well. Some of this was needed because of the battery inside, because you must have a certain security for the battery that there is no intrusion.

“We have carbon housing around the outside, and then another around it to keep it really safe.” 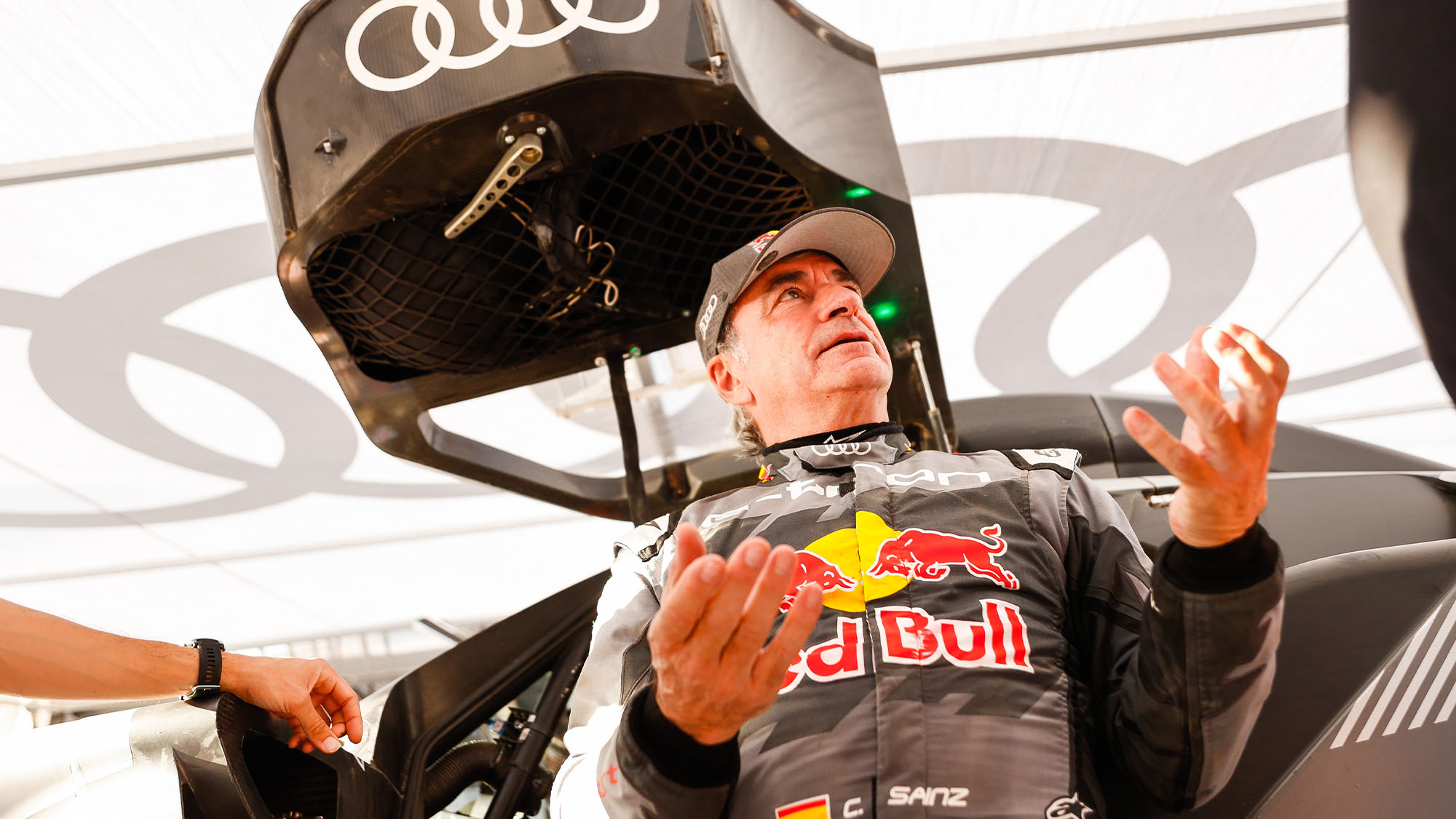 “In the beginning we were not quite sure the carbon plate would fit again when we put the battery in again after testing and taking it out,” added Dreyer. “When we put it in again, it worked just like the first time.”

It’s not just Sainz who has found the car pretty agreeable to drive. Audi scored a 1-2-4 in today’s Stage 8, with Mattias Ekström winning, Stéphane Peterhansel runner-up and Sainz fourth. These results, for a car in its first event, are ominous for its rivals.

“The car is good everywhere, I don’t see any disadvantage with it,” said Sainz. “We have a good feeling I must say. I have grey hair, so I know a little bit what I want!

“I have been working with a lot of manufacturers. I have a good instinct to put it in the window I like. There’s more potential to come.”