Saturday, late-afternoon in the Al’Ula desert and the shadows cast from the imposing rocky backdrop have cooled the blazing intensity. Nico Rosberg has time and is happy to shoot the breeze as we stand in front of his RXR team’s pod tents in the Extreme E paddock.

Earlier on, Johan Kristoffersson and Molly Taylor showed a clean pair of Continentals to their rivals in the qualifying runs, although getting pinged by more than a minute for speeding in the driver ‘switch zone’ because of faulty limiter software has piqued the boss.

It doesn’t matter. The next day, three-time World Rallycross champion Kristoffersson and Australian rally ace Taylor will write a piece of history by winning the first-ever X Prix with considerable ease. Rosberg is in a good place, just as he was back in 2016 when he beat Lewis Hamilton – and the odds – to become Formula 1 world champion.

He’s left that world far behind him now. Today, Keke’s lad – still just 35 – describes himself as a “sustainability entrepreneur” with a zeal that borders on almost religious fervour. “It’s more about a life of service now, for the greater good, for many people to benefit from,” he says with meaning from behind his facemask. “I studied psychology for 10 years, to become a better F1 driver, but actually it was for my life. I’m dedicated to helping others now.”

Rosberg always was a sensitive soul, which made his flowering at swim-or-drown Williams and then at Mercedes, facing first Michael Schumacher and then the unrelenting force that is Hamilton, all the more remarkable. Mark Webber nicknamed him ‘Britney’ – but beneath the exterior sheen it turned out Nico had steel. 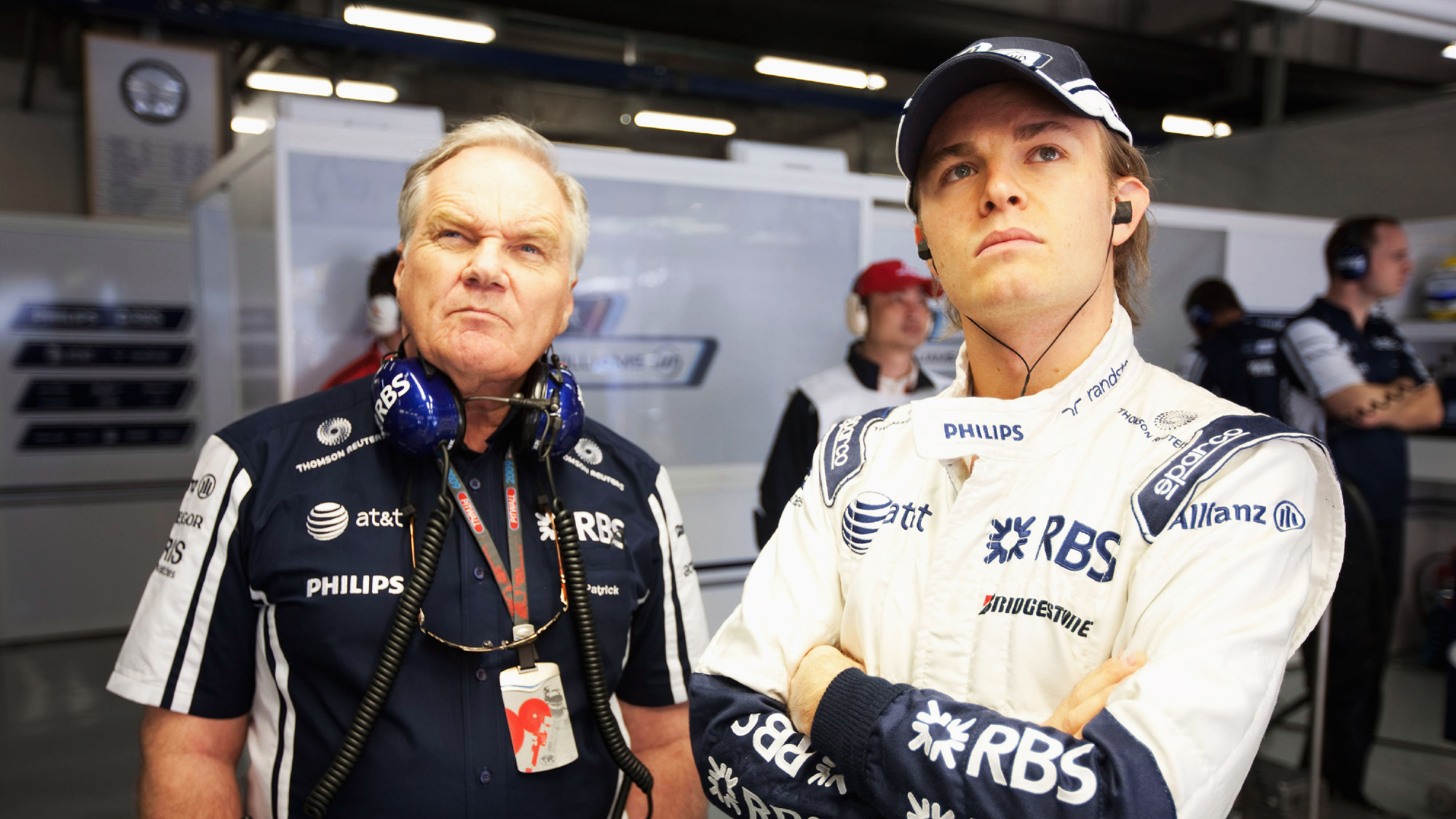 Perhaps at his core there were shades of his old man after all. Although ask him what sort of team principal he wants to be, now he’s stepped behind the bench, and the answer couldn’t sound less like Keke – or Frank Williams, Patrick Head and Toto Wolff for that matter. After explaining how he did the driver deals personally and shaped the team’s structure from elements of his father’s DTM squad, Nico says: “I’m trying to get as involved as much as possible without being a pain. I have so many experiences from managers’ work with me as a driver. I remember exactly what I liked and didn’t like.”

What he didn’t include was the occasion when Head opened his visor during a qualifying session and bellowed into his face: “You are going to put us out of business if you continue driving like that!” Or another time at touchy-feely Williams when Sam Michael told him “you were useless to us this weekend”. 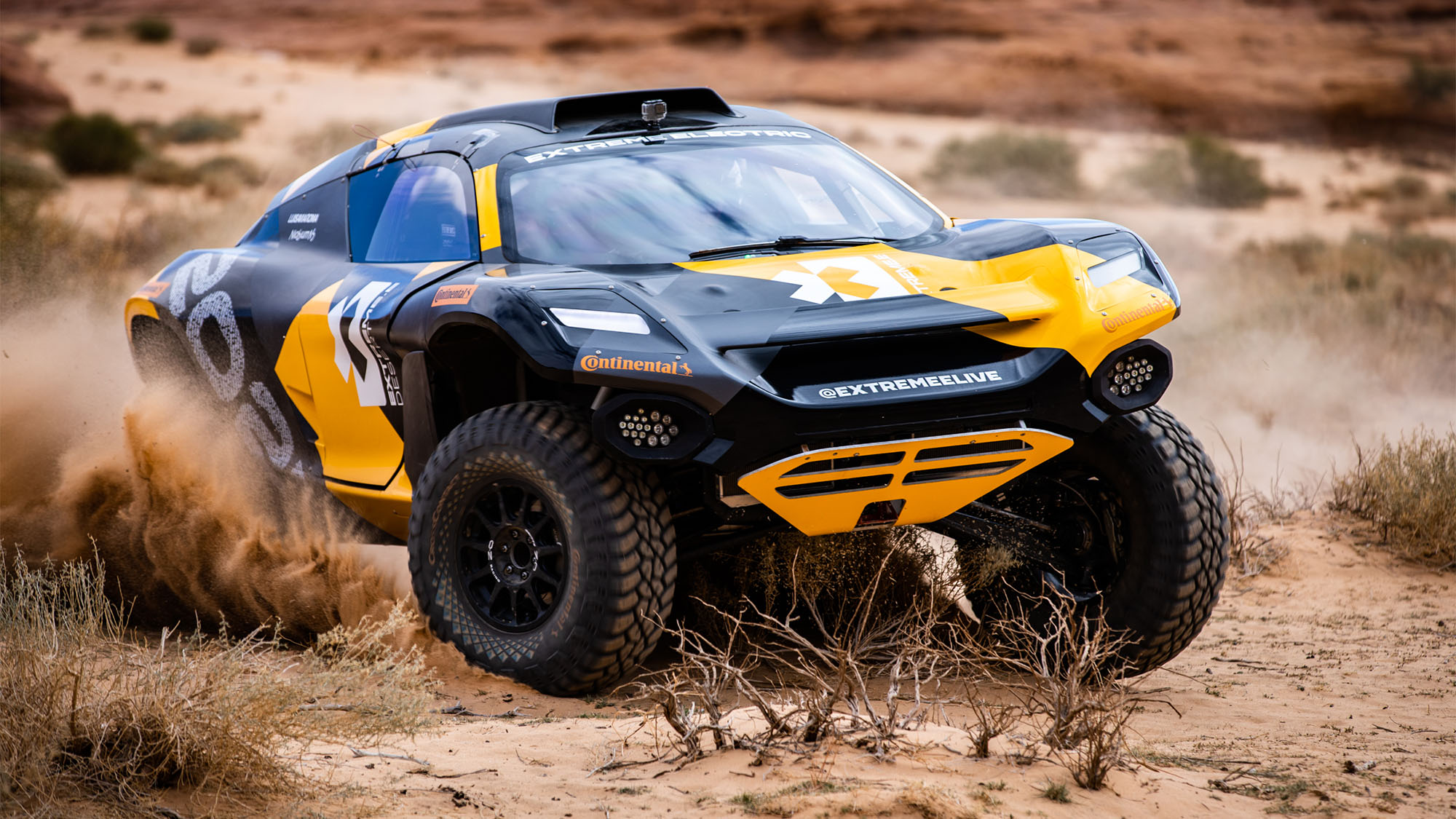 Explosive performance from electric SUVs — why Extreme E will be huge

Extreme E purports to be Star Wars pod-racing, rallycross and Cousteau's Calypso all rolled into one – but Damien Smith asks if the series can make the difference it wants to?

“I mean, I was useless, I spun off on my own in last place,” Rosberg smiles. “But I was a young driver with a couple of grands prix under my belt. It’s because they are all hard-asses and they sometimes have a little bit of empathy difficulty to realise I was really sensitive as a driver and needed to feel their love.”

Clearly, you don’t forget such moments, and Rosberg has carried them into team ownership. He knows first-hand how delicate a racing driver’s confidence can be, and how crucial it is not to be crushed. “I don’t like it when a team manager puts the blame on you internally, making it clear to the whole team that you are to blame, that it’s your fault,” he says. “Because I’m very sensitive and most race drivers would be to that. You have to be so careful because driver confidence is so essential. You want to do everything you can at all times to try and keep that high. It’s the most important thing.

He pulls on a relevant and current example to support his point. “Look at Sebastian Vettel, one of the greatest drivers in our sport. The only way to possibly explain something like [what he’s going through] is that he has a mental negative spiral which he needs to find his way out of.”

So does he think the Aston Martin driver can pull himself out of his nosedive? “I have no idea,” he says. “Before the season I would say yes, but then watching the Bahrain GP… it’s strange. I don’t understand it. Anyway, the most important thing for drivers is to keep that mental confidence up. I’m trying to pick out the best of what I’ve seen and not do a Patrick Head! That was painful.” 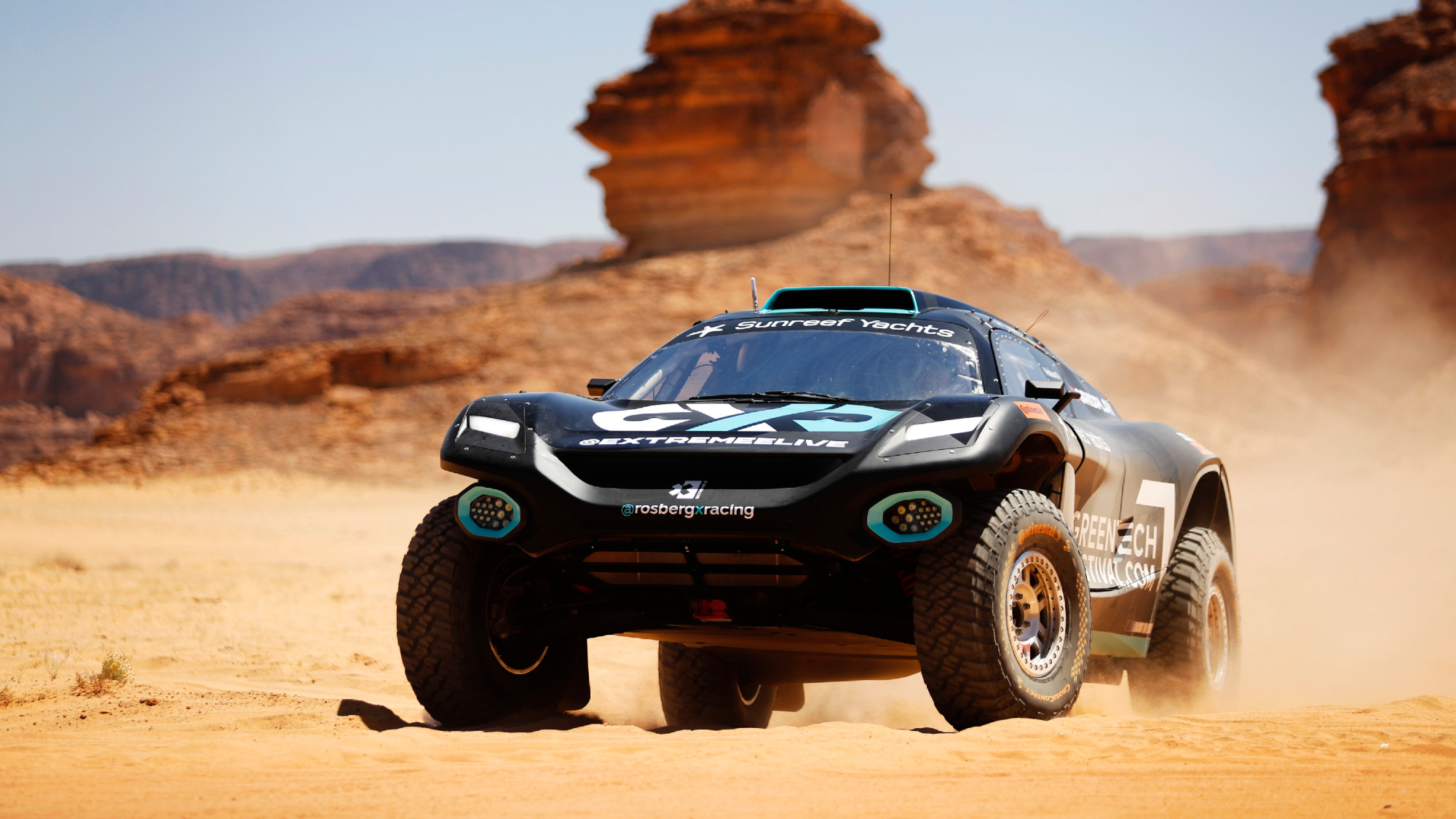 In Kristoffersson, considered by some as the greatest rallycross driver ever and a man whose unflinching self-belief shines through in and out of the car and out of it, Rosberg has a driver you wouldn’t really describe as delicate. Rosberg knows they are not all like he was.

“If you take someone like Max Verstappen he would not be described as sensitive,” he says. “To cope with the amount of criticism he had in that one year [2018] when he made mistake after mistake, yet still remained so committed and then said ‘I’m going to headbutt you if you say that one more time’… I mean, I would have been in my cave by then!

“A Schumacher could deal with it best and was on the resilient side. It depends. And it’s not clear whether it’s a strength or weakness because a sensitive driver will question himself the most and the people who are more self-confident will see the blame in other people who work on the car. For me sensitivity was a great force in the end. I was always questioning myself, trying to find the next step, to make myself better.” 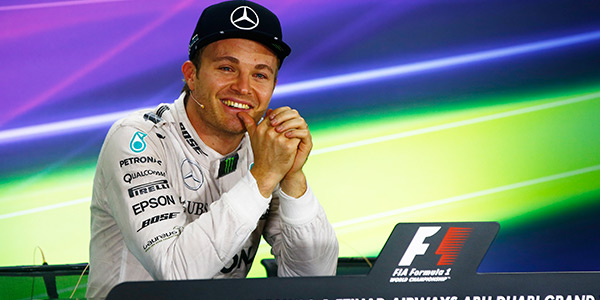 How 2016 convinced Rosberg to retire

Mark Hughes on the reasons – and seasons – behind Rosberg's decision to retire Nico Rosberg has retired with immediate effect, just a few days after clinching the world title…

All those psychology lessons, that internal study and selfish introspection culminated in Rosberg’s 2016 championship season. Sure, Hamilton had poor luck on reliability at crucial moments, but no one can take away Rosberg’s title, hard-earned in equal machinery against one of the greatest drivers in history. Then, shattered by the experience, he walked away. However we might judge that decision – and we all have – Rosberg showed total conviction in making it. And from everything he’s said and done since, it’s a call he almost certainly will never go back on. Nico sliding into a racing car – any racing car, including his own Extreme E Odyssey 21 – is not something we are ever likely to see, beyond the odd demo event.

“The end of 2016 was the perfect moment for me, in every sense of the word,” he says. “It was beautiful for me, I achieved my dream. It was intense so I was OK with the intensity coming to an end. But it also gave me the opportunity for a second life and to be here now in Extreme E, with a social force at the heart of motor sport for the first time ever.

“There’s an opportunity. The power of sports is unbelievable and really untapped in terms of social causes. We are seeing the start with racism, Black Lives Matter, and it is starting to pick up now. But there is so much potential. We can show how it is done, and maybe the Olympics will follow us or the soccer World Cup.” There’s that evangelical mission again. 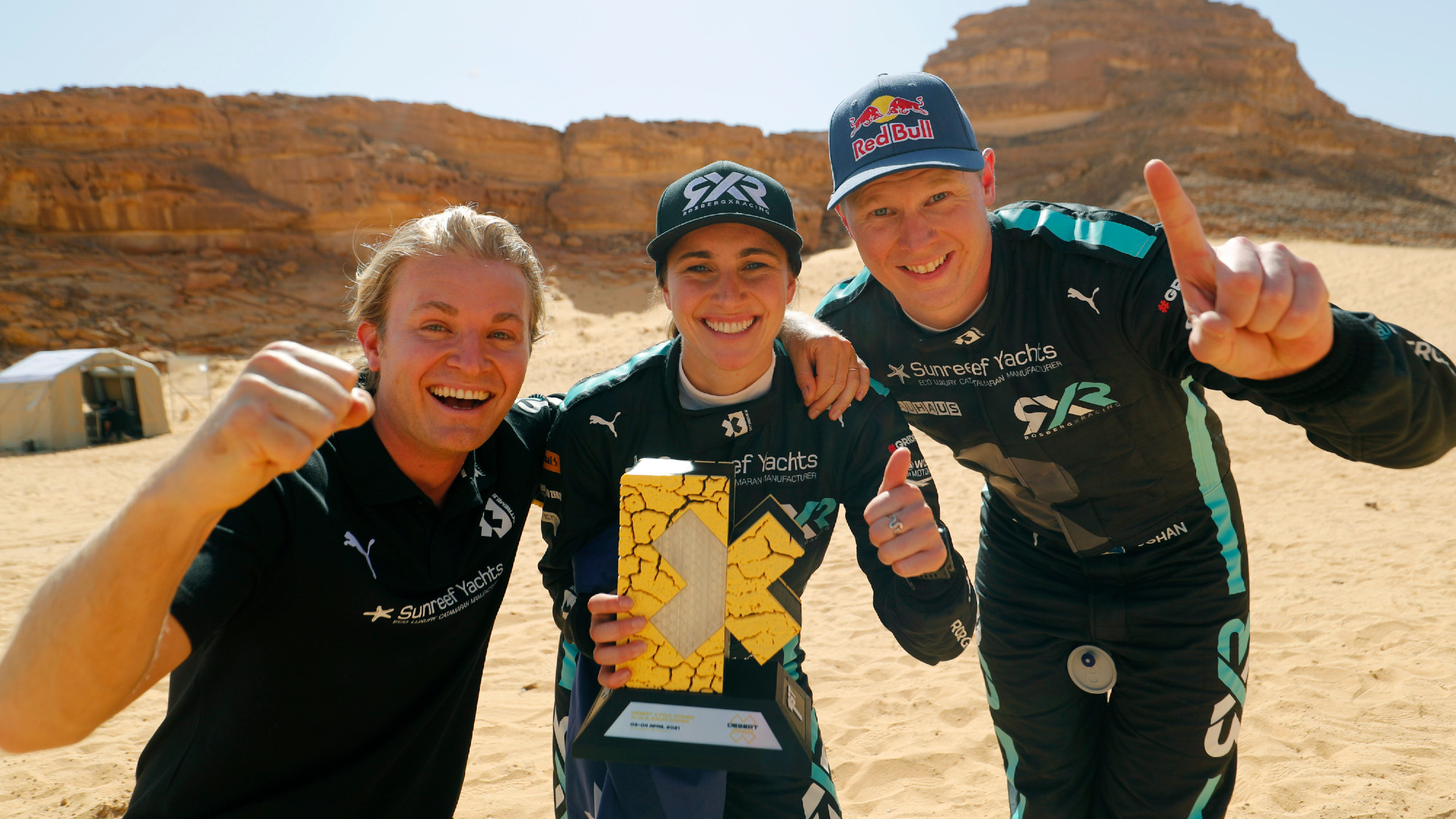 “Stopping was not easy,” he adds. “Imagine stopping your job without ever having thought about it before, and without any clue what you are going to do next. It’s the same for everybody. Change is always going to be more difficult than doing the same thing, but it can be a bigger step in the right direction for an even better life. What I’m seeing here is that if we have a chance to win something, and it looks like we do, I think I can relive some of those emotions even if I’m not in the car. That I’m looking forward to.”
Turns out he didn’t have long to wait.

The shadows are lengthening now and others are waiting to chat to Nico, in an open, friendly paddock that’s a throwback to how racing used to be. But before we bump fists and depart, one more thing: how’s your dad?

“He’s doing fine, yes,” says Nico. “He’s following every single moment. I thought I might invite him to a race, it would be nice to do a trip together.”

He doesn’t strike us as someone who cares about sustainability. “No. That’s not him.”

But he wants his grandkids to grow up in a better world? “No, I don’t think so either! He says ‘electric cars, what the f*** is that?’ But the funny thing is we’re transforming him now, we’re getting there, and if we get him the sky is the limit. He was the one that when I invested in Extreme E said ‘what the hell are you doing?’ And now he’s setting the alarm to watch the TV – and loving it.”

Racing drivers, delicate or otherwise, share the same spirit at heart. It’s in the blood.