The off-road electric series aiming to raise environmental awareness arrived this weekend to more self-produced hyperbole than perhaps any championship before, but all things considered was more a success than not.

Lewis Hamilton, Nico Rosberg and Jenson Button all entered teams, whilst US racing royalty Ganassi and Andretti also had their own outfits. The high-profile entrants helped to massively fuel the publicity and anticipation for this new championship.

Billing itself as the ‘Electric Odyssey’, many a sceptical eyebrow round the world was raised in scrutiny as the first-ever round, the ‘Desert X Prix’, took place in Saudi Arabia. Was Extreme E setting itself up for a massive fall?

The answer is no. Despite some obvious teething troubles, the off-road action was ultimately entertaining and the product appears strong. Series founder Alejandro Agag and all his stakeholders must surely be pleased.

“Was Extreme E setting itself up for a massive fall?”

Thrilling action from a field featuring some world-class drivers, a fascinating and exciting car in the Odyssey 21 E-SUV, plus a bonkers circuit set against stunning scenery in the desert really did provide entertainment, even if not in the way that organisers had envisaged.

So, the set-backs. First of all, the racing itself. It quickly transpired that cars were throwing up so much desert dust that races of four or five cars weren’t feasible. There were also a few breakdowns and software issues on a vehicle that is some ways still a prototype — not ideal for a series that is supposed to highlight the viability of electric vehicles.

Agag and his colleagues acted quickly to rectify the first problem, and must be commended for doing so. He changed the qualifying format from a series of knockout races to a WRC-style time trial: two laps around the circuit, with the mandatory driver change for each team occurring at the end of the first lap. 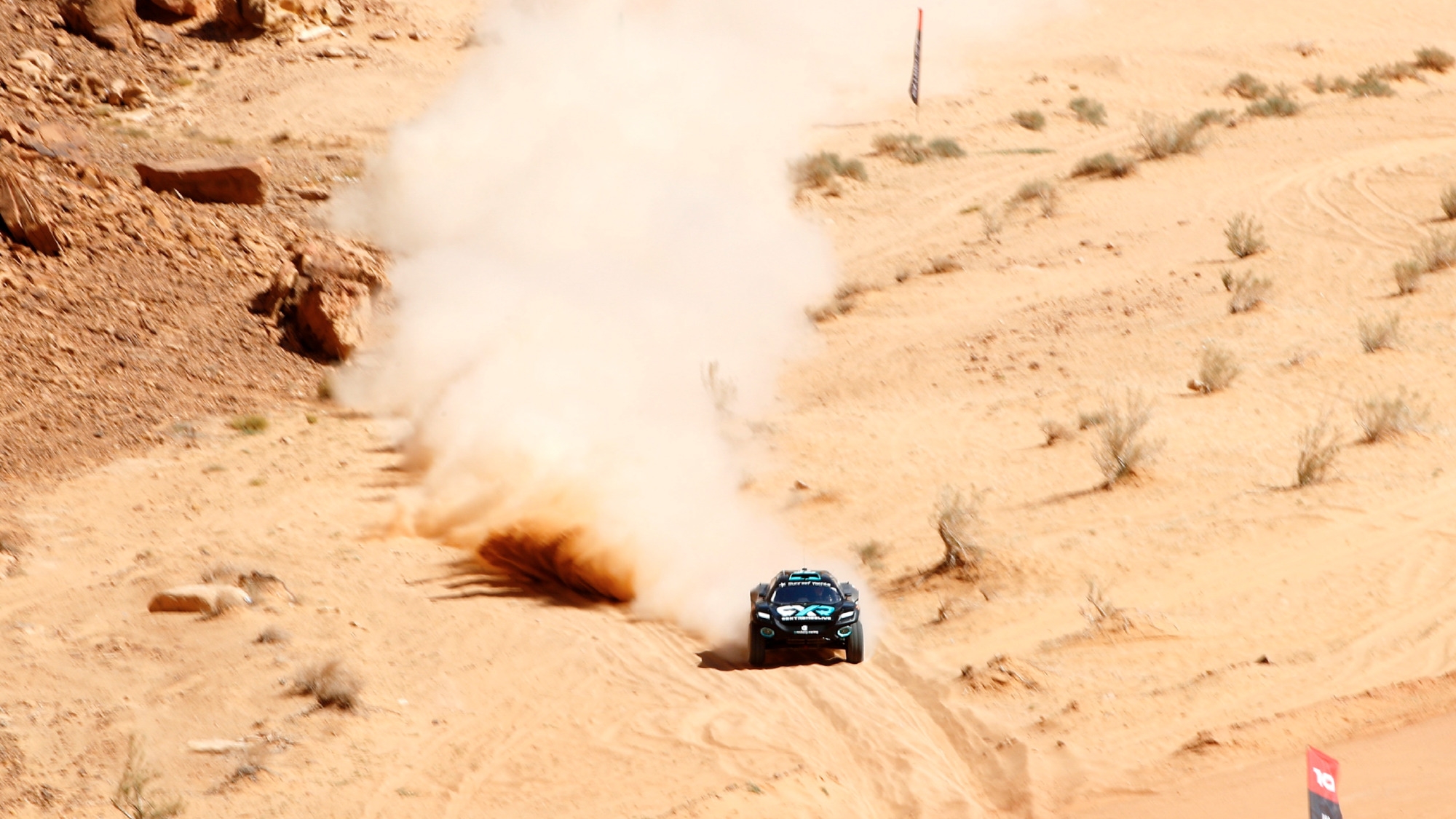 The billing was Nico Rosberg versus Lewis Hamilton once again but it was the former that took the first-ever Extreme E X Prix win in Saudi Arabia. Drivers Johan Kristoffersson…

The format was exciting in the main and worked for the most part. The action was close at the front and there was drama further back as Stéphane Sarrazin and Claudia Hürtgen suffered huge shunts in qualifying, showing both the course and speed of the car were not to be underestimated.

Slight confusion occurred due to a lack of split times as the one-car heats were conducted, so viewers couldn’t track the progress of stages as they were happening. However, the time deficits did appear on the second lap.

To be fair to Agag and co, they weren’t planning for a time-trial, so managed to do a good job conveying what was going on in the racing action considering. It also acted as a decent way to get viewers used to what the cars looked like when running and who the different teams were before the frenetic racing started.

The organisational improvisation was well-judged. EE managed to do things safely without compromising the entertainment too much, all the while having no idea how the action would really shake out – that in itself is almost miraculous.

Unfortunately, the semi-finals and final were fairly anticlimactic. The sheer amount of dust thrown up by the cars meant that once the charge down to Turn Three had occurred, the race was pretty much settled. From there, the leader had a clear view whilst the second and third place cars had almost zero visibility, forcing them to back off. The racing up to the first three corners showed you just how good Extreme E has the potential to be.

In both the semi-final and the final, Rosberg X Racing’s Johan Kristoffersson demonstrated exactly why he’s a three-time world rallycross champion. The Swede took a wide entry into the third turn in both races, using the switchback to nip into the lead and dominate from there.

Kristoffersson himself commented: “The race is over after Turn Three.”

The one-car heat and then reduced-field racing was probably the best compromise in the circumstances. The excitement of a new series made up for lack of racing, but organisers will have to have a contingency plan next time. 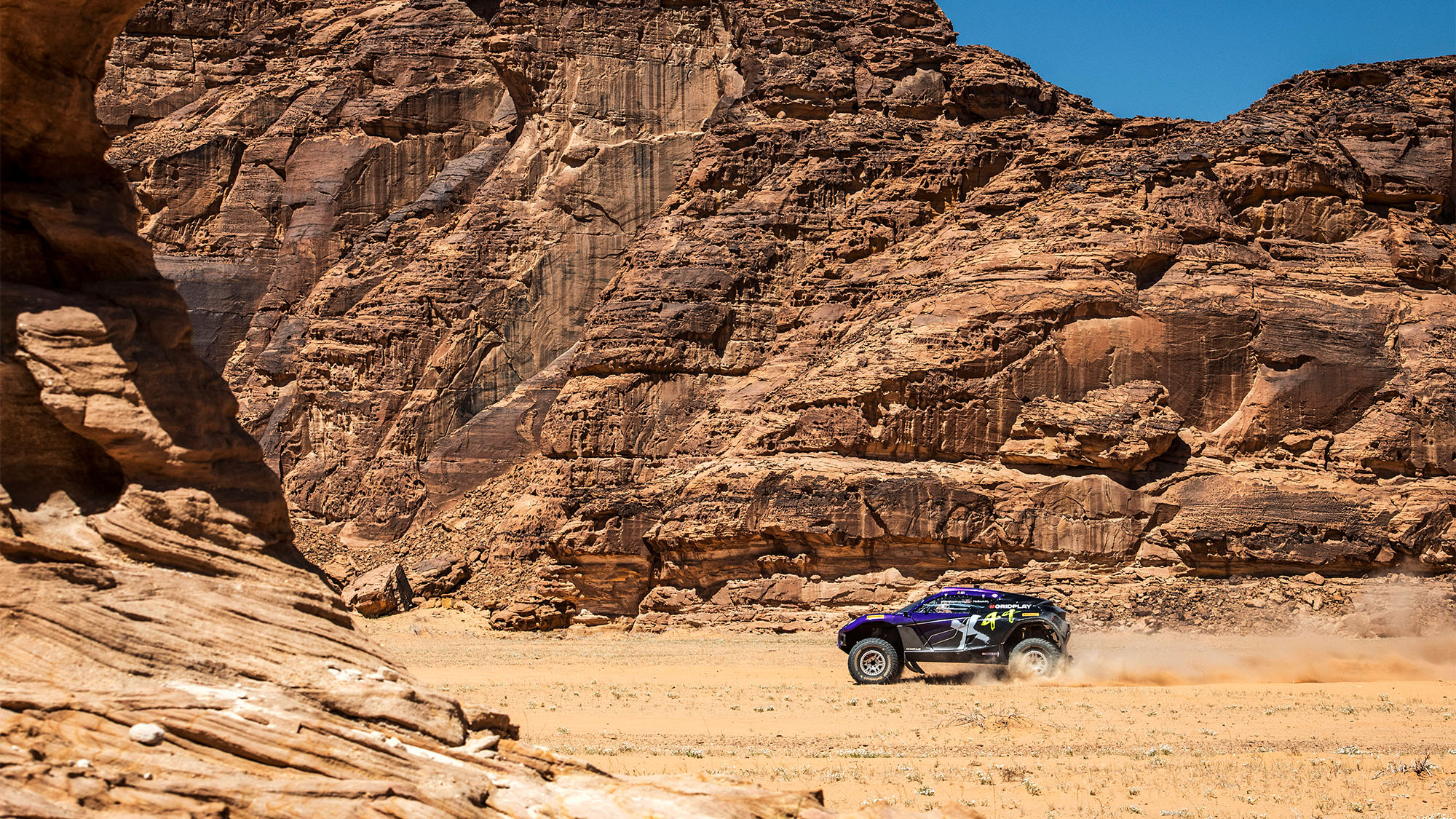 Stunning scenery – but was it right to start a new series promoting gender equality in a country seemingly not interested in women’s rights?

The draconian penalties handed out to Button and Rosberg teams for pitlane speeding could also do with a review, considering both cars’ pitlane limiter software failed in the events. Penalising them, and to such a degree, blunted the competitive edge and seemed self-defeating.

Crucially, all of these criticisms can be solved, and there are already plenty of positives.

Electric cars can come across as a bit soulless, but that doesn’t seem to be a problem for the Odyssey 21 – much to Extreme E and manufacturer Spark’s credit.

True, we’ll probably never fall in love with the whine of the electric motor but these machines bucked, jumped and slid over the sand and rocks in the unforgiving desert in thrilling fashion, whilst being fast too – you could really see that 550bhp being put down.

This was visceral, high-speed motorsport. In comparison, Formula E races sometimes give the impression of a collection of Hotpoint irons duelling it out in a destruction derby in downtown Berne. It even compared favourably to the mainstream WRC and rallycross series.

Extreme E’s push for gender equality is also a massive plus. Every team must field both a male and female driver and, as a result, it shines a light on female racers some casual motor sport fans might not know about.

Regular Dakar entrants Laia Sanz and Cristina Gutiérrez run for Carlos Sainz’s and Hamilton’s teams respectively and both often perform heroics at Dakar and other rally-raids. Now they have exposure for their rallying efforts, and deservedly so. Other entrants Catie Munnings and particularly winning female Rosberg driver Molly Taylor were very impressive too.

Carlos Sainz Sr continued to show why he’s rallying’s ‘King of Cool’. 58 years old and barely breaking a sweat, he outgunned the young pups in qualifying to put his car 3rd. His and Sanz’s car lost out in the semifinal, but it was still an impressive showing. Watching him duel it out with Sébastien Loeb once more was a pleasure. 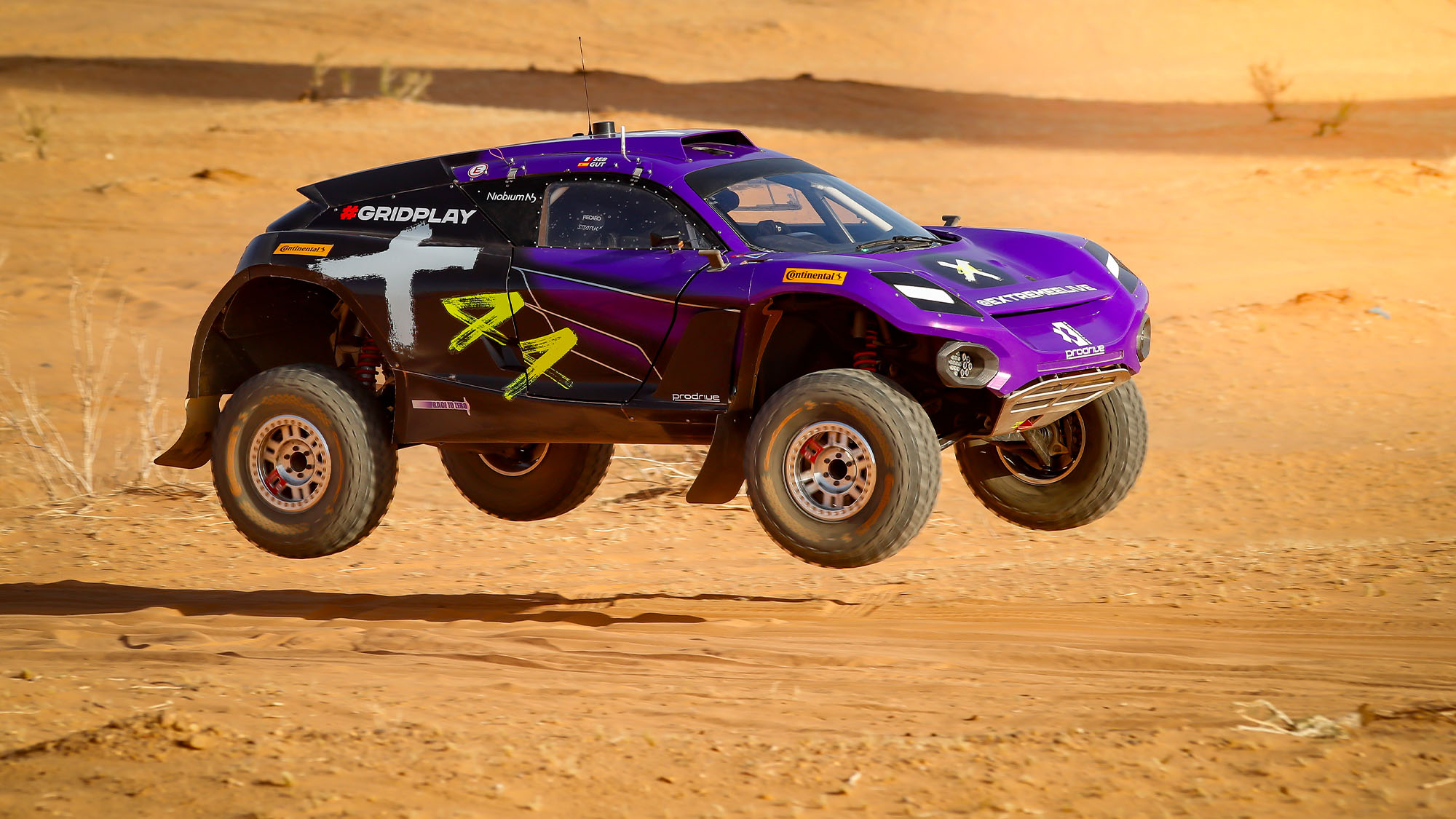 To have drivers of this quality, as well as Button, Mattias Ekström and Timmy Hansen, from a variety of disciplines, going head to head, is manna from heaven for motor sport fans.

The fact that the top two finishers were rallycross world champions was particularly telling. Kristoffersson and Andretti United driver Hansen really did show how their skill sets are suited to Extreme E. Loose surface, undulations, close racing and a choice of lines – this new series seems set up for them.

Sainz and Loeb, though clearly very able, looked a bit slow in comparison, and Button just seemed lost. Once the dust settles, literally, and Extreme E heads for round 2 at the Ocean X Prix in Senegal, we’ll see if the competitive trend continues.

Sarrazin’s crash occurred on a course which was both extremely challenging and aesthetically pleasing. Star Wars comparisons have been made, and there certainly was a touch of Tatooine about the Saudi Arabian desert as the cars blasted through. It looked fantastic.

Some sections beggared belief. A one-hundred metre downhill drop halfway through? You used to be able to design something similar on Playstation’s ‘90s off-road offering V-Rally. Few must’ve thought this kind of thing would ever become a reality.

It must be said that starting a new championship promoting gender equality in a country which does quite the opposite is unusual thinking. Is it ‘sport-washing’? Perhaps, but you hope shining a light on countries such as these will force them to move towards more modern attitudes in equality and women’s rights.

Senegal, is hardly a centre of female empowerment either, but it’s the next port of call for the Extreme E ship: a boat travelling round the world? Saving the environment? With racing? It all sounded a bit of a nonsense when first announced, but the doubters might have just been proved wrong so far.

Whether it will have the environmental impact it so desires remains to be seen, but the device being used to lure viewers in – the racing – looks promising.

Agag has managed to take what’s good about motor-racing and also address some of its inherent flaws in an effort to engage new fans. He’s not there yet, but Extreme E looks to be on the way.

These are unprecedented times, in racing and the wider world generally. We are entering an incredible, newly pioneering, perhaps even ‘golden’ age of motorsport, and we should be grateful for it.