The place wallows in history. And so does the rally that takes its name from a small town in Flanders where the land is flat and the language impenetrable. The Ypres Rally, established in 1965 and now part of the FIA Intercontinental Rally Challenge, has a special place in the history of motor sport, and rightly so.

The all-asphalt stages are spread across the Fields of Flanders, scene of so much death and destruction in World War I and at the centre of which is Ypres, or ‘Wipers’ as the Tommies called it during those dark days. 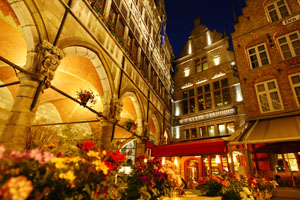 Now these fields are bursting with life, the rally cars blasting between rows of vegetables. Cabbages, potatoes, beetroot and corn as far as the eye can see. Speeds are high, there’s barely a hill worth its name, and the challenges come from long, fast straights leading to right-angle corners. The surface varies, the asphalt offering dramatically differing levels of grip.

The winner will need experience, local knowledge and lightning reflexes if he is to avoid the rocks that lurk in the apexes as well as the dust and gravel off-line. Enter Freddy Loix, local hero and five times an Ypres winner. Now 39 years old, he’s back from retirement and strapped into the potent Skoda Fabia. This charming man attacked and attacked again, until his younger and more flamboyant rivals slipped or rolled into the fields and ditches. First it was championship leader Juho Hänninen, stuck in a ditch, then reigning champion Kris Meeke, rolling across a field, allowing Loix to lift off just a touch and come home to a rapturous reception in the shadow of Ypres Cathedral on a hot summer night in Belgium. With him on the podium were Skoda works driver Jan Kopecky and a delighted Thierry Neuville, who salvaged some honour for the defeated Peugeot team.

And thereby hangs a tale. The Skoda IRC team is a fully supported works effort, the Czechs fielding two new Super 2000 Fabias for Hanninen and Kopecky as well as a Skoda UK car for Guy Wilks, who missed Ypres after being injured in a crash on the Sardinia rally. And, of course, the car for Belgian favourite Loix.

All this does not please Peugeot, champions for the last three years, and still entered semi-independently by the Kronos team. The French outfit is pleading ‘poverty’ in the face of the mighty Skodas, claiming that the IRC should not be permitting factory outfits. But this does not concern the organisers themselves, who respond to cries of foul by pointing out that the championship changes organically all the time and is not closed to manufacturer teams.

“If we complain, people will say we are bad losers,” says Marc van Dalen of Kronos. “But that is not the case. We simply don’t have the resources or the budget to fight a full works team in the IRC.” Series promoter Jean-Pierre Nicolas, a former WRC team boss at Peugeot, denies there is a problem. “It is not unfair to have a works team in the IRC,” he says. “The IRC is strong, we have hundreds of independent entries, and sometimes we will have an era when a factory team wants to come in and compete. There is a good battle between Peugeot and Skoda, it’s exciting and good for the series which grows in stature.”

Whatever the ins and outs of this, the huge crowd that gathered in Ypres on Saturday night cared only for one thing. Their man Freddy was back, and back on the top step for a sixth victory. And Monsieur Loix will be out in his Skoda this weekend at the Goodwood Festival of Speed. Give him a cheer. This is how comebacks can be done.