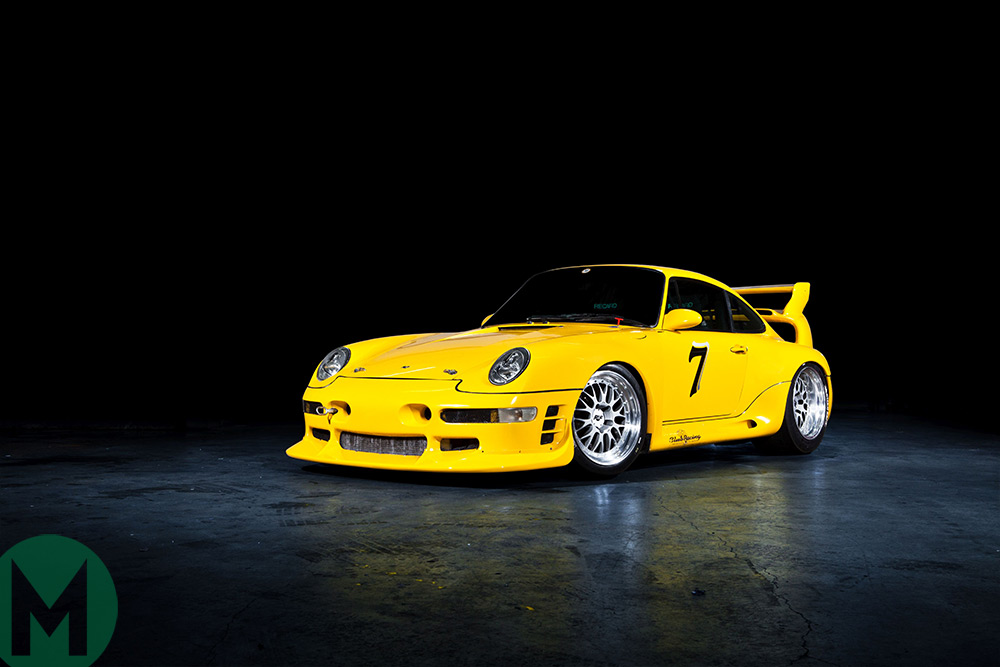 All images courtesy of Bonhams

The RUF CTR is a Porsche 911/993 with everything turned up to 11. It was nicknamed the ‘Yellowbird’ for obvious reasons, and it boasted a top speed of 213mph – a Ferrari F40-beating record that was set in 1987.

This 1997 RUF CTR2 Sports Prototype is the Yellowbird’s successor, and it’s being offered at Bonham’s Paris sale on February 7, for up to £1.4m. But this model is extra special: it’s one of two entered in the 1997 Pikes Peak Hill Climb.

Alois Ruf started out as a tuner of Porsches, becoming a manufacturer in 1981 with the BTR trio of RUFs. He chose the Porsche 911 as the platform, increasing the displacement of its 3.3-litre engine to 3.4-litres, attaching an oversized KKK turbocharger, a new intercooler and designing bespoke suspension and brakes to handle the 369 horsepower that resulted.

The CTR2 used the 993’s 3.6-litre engine and had up to 580 horsepower on tap, with Kevlar body panels, a rollcage, new aero parts and Recaro seats. Customers could choose a two-wheel-drive or 4WD version, and the top speed was 217mph – another record for RUF.

This particular model, however, sports the most powerful CTR2 engine ever built. It boasts 702bhp and a torque curve that peaks at 5000rpm. That’s perfect for Pikes Peak, where acceleration is key and normally-aspirated engines lose three per cent of their horsepower every 1000 feet of climb.

Its form, straying wildly from the original 993, is functional: That hulking (adjustable) rear-wing also directs airflow into the CTR2’s gaping side-mounted intercoolers, while this CTR2 is fitted with a six-speed manual transmission on a rear-wheel-drive set-up.

Brothers Steve and David Beddor drove the prototype CTR2s to and from Pikes Peak, with Steve Beddor finishing second in the open-class and his brother finishing fourth. Steve Beddor would go on to win the Virginia City Hill Climb thrice and rack up wins elsewhere, including at circuits. In fact, 41 per cent of his CTR2’s races would result in wins and 76 per cent in podiums.

The car was bought from Steve Beddor since, and RUF overhauled the engine – fitting the same water injection system that the Porsche GT2 RS enjoys – with Öhlins redrawing the suspension system.

If the new owner decides to splash out £1.4m for the privilege of driving their new CTR2, they’ll be relieved to know that it’s now road-legal, courtesy of an extra silencer on the engine.

The only downside – and that’s used in the loosest sense – is that the limited engine ‘only’ produces 592bhp.