The World Rally Championship has confirmed that its 2020 season will end on 19-22 November with the Ypres Rally in what will be Belgium’s first-ever WRC round.

It was also confirmed that the Rally Japan round, originally scheduled to be the final event of the season, will no longer take place this year, extending its hiatus from the calendar to 11 years.

The Belgian round will host the last event of a delayed 2020 season that began back in January as scheduled with the Rally Monte-Carlo. The WRC managed to make it up to its third round in Mexico before pausing the season in March due to the global pandemic.

The Ypres Rally was first staged back in 1965 and quickly became a staple in the European Championship. It has been won by the likes of Thierry Neuville back in 2018.

Simon Larkin, WRC Promoter’s senior director events said the new event would become one of the tougher challenges of this year’s season.

“For many years Ypres was a hugely popular cornerstone of the FIA European Rally Championship. Its elevation to the WRC will provide one of the sternest challenges of the year for competitors and a fitting finale to the 2020 season 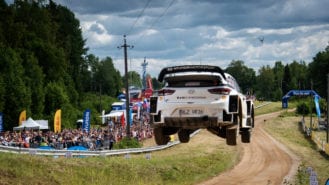 “Its tricky mix of narrow asphalt lanes and big ditches lining the roads, allied with some stages in the dark and the potential for mixed weather, will provide plenty of thrills and spills for fans.”

The route will total 300km of special stages across asphalt with the final day of competition taking place at the iconic Spa Francorchamps circuit.

Japan had been scheduled to return to the calendar for the first time in a decadebut its reintegration into the calendar will now have to wait another year as preparations turn to 2021.

“We’re very disappointed Rally Japan will not happen this year due to the pandemic, in particular given all the hard work undertaken by the Japanese authorities, the Japanese Automobile Federation and the organising team. I thank them for that,” FIA rally director Yves Matton said of the decision.

“Belgium has a great tradition and passion for rally, evidenced by the number of Belgians in various roles – drivers, mechanics, team principal, journalists – in the WRC.

“The route will showcase the DNA of the rally as it crosses the country by linking Ypres to Spa-Francorchamps, two iconic venues of Belgian motorsport,”

Rally Estonia is scheduled to restart the WRC season next month with its first official championship round taking place on 4-6 September.