Delayed like everything else by the UK lockdown and associated Covid restrictions, the shortened 2020 British Rallycross Championship bursts into life at the end of this month – and multiple Olympic gold medallist Sir Chris Hoy will be on the grid.

Hoy and Isle of Man TT legend John McGuinness have agreed to make guest appearances in the series, the former at Lydden Hill on August 30/31 and McGuinness at Knockhill on September 26/27. Both will drive the Citroën C4 belonging to Lydden track owner Pat Doran.

It won’t be a completely new experience for Hoy, who has raced extensively since his cycling heyday, competing in the European Le Mans Series, the British GT Championship and the Le Mans 24 Hours. He also contested the Barcelona round of the World Rallycross Championship in 2019.

“Last year I got to experience six different forms of motor sport as part of a TV series,” he says, “and rallycross was one of them. It started out with the possibility that I might be able to test a car, but I ended up being entered for Barcelona. I did one test at Pembrey, then found myself at the start of first practice alongside Kenneth Hansen, Timmy Hansen and Niclas Grönholm, handbrake on, 600bhp, anti-lag bouncing around… It was insane.

“But I loved it. The cars are exciting, the format is very condensed, for the fans it has everything and I never imagined I’d get another chance. 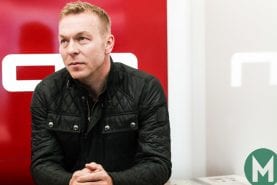 Sir Chris Hoy tells how he's keen to do more rallycross - and how he's still trying to live down his 2014 Goodwood crash, from the latest Motor Sport podcast Photo:…

“For me it’s not about going home with a trophy, but about deriving pleasure from doing the best job I can. I’m aware how lucky I am to be getting this chance. I want to do well, but when I step out I can relax and enjoy it. When I was cycling, a result could make or break your mood. If you went into a race, did your best and finished second or third, you’d be frustrated and would dwell on it for weeks afterwards. I’m not doing this because I’m being paid, or because I have to. It’s purely for the experience, something else to enrich my life.”

McGuinness faces a slightly steeper learning curve. “I know only what I’ve seen on TV,” he says, “so not a lot. I’m in at the deep end. I thought it was a great idea when it was first suggested, but now I’ve seen the car it’s more a case of, Oh sh*t…’ It’s a weapon. I’ve been watching a few onboard clips, trying to figure a few things out, but don’t know what to expect. I’ve done 50,000-odd miles around the Isle of Man at decent speeds, but this is all absolutely new. So long as I enjoy it and don’t embarrass myself, that’s fine, but I know it will be bloody difficult.”

His closest previous experience came four years ago, when he tested multiple BTCC champion Gordon Shedden’s Honda Civic, also at Knockhill. “I turned up thinking it would be fine,” he says, “but I was soon chatting to the data engineer, asking him how my braking compared with Gordon’s… I want to be competitive, but I’ve got to respect the car – and its owner. And I am also aware that I might well have a target on my back.