For a man you may never have heard of, from a country with no reputation in the automotive sphere, what Mate Rimac has achieved at the age of just 32 is little less than astonishing. In a dozen years, from a start point being a garage in his garden, he has built a car company in Croatia that now has a majority shareholding in Bugatti.

Rimac is probably most famous for building the electric hypercar which crashed with Richard Hammond at the wheel, but thankfully burned only after he’d managed to free himself from the wreckage. But the company has been making tiny quantities of all-electric hypercars for the last few years while its first comparatively mainstream car, the Nevera, (by which I mean just 150 units) has recently gone on sale.

So how has this mouse of a company come to become such a major player of the world stage it was courted by Bugatti-owner VW, aka the largest car company in the world? In short, Rimac had something Bugatti didn’t just want, but desperately needed, namely an ultra-high performance all-electric powertrain. Indeed while Rimac’s cars have been broadly well received, it is the battery and electric motor technology it now possesses that is the real appeal of the company.

The terms of the deal are simple insofar as no money changed hands, but complex in terms of who, exactly, ends up owning what. But briefly, a new company has been formed called Bugatti-Rimac, which is 55 per cent owned by Rimac Automobili, which will be led by Mate Rimac himself and headquartered in Croatia, not France. But Rimac itself is owned 37 per cent by Mate, 24 per cent by Porsche and 12 per cent by Hyundai. The remaining 45 per cent of Bugatti-Rimac is owned by Porsche, which is itself owned by VW. Which, combined with its shares in Rimac itself, means that Porsche actually and effectively owns 58.2 per cent of Bugatti-Rimac.

But what does this actually mean? For Bugatti, as discussed, it means access to the technologies that will power its future: there can’t be many powertrains that seem more out of step with modern times than the 8-litre, 16 cylinder, quad-turbo engine used in all its cars to date. For Rimac it is means access to not just the money required to build the more mainstream models upon which its future depends, but crucially the purchasing clout that comes with effectively being a member of the VW group.

Imagine ringing up a global supplier and asking for a batch of 300 electric window motors as the independent Rimac. Chances are they’d either not take the order or quote a price so high you’d not place the order, and that’s all supposing you didn’t hang up because they were laughing so much or, indeed, that they picked up the telephone in the first place. Now imagine exactly the same call but with the might of a company that places orders by the million behind you… 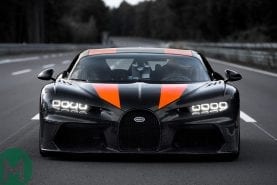 The Bugatti Chiron's 300mph run was brilliant and pointless

So what does this mean for the future? In the short term not much. Bugatti will still build cars in Molsheim and I expect its monster ICE engine will survive for as long as legislation allows, because when your customers are in that league, they don’t like being told what they can and cannot drive. But actually electricity makes a great deal of sense as a power source for a modern Bugatti: its cars are already huge, heavy and rely on blistering acceleration for a USP, all of which an electric Bugatti is bound to provide.

But it may not all be plain sailing. The evidence is anecdotal because no-one publishes the figures, but my very strong sense is that electric hypercars are not exactly finding favour out there at the moment. Indeed, were Lotus, Rimac and Pininfarina – the three main players in this market – selling out their already very limited runs of cars, you can bet your bedroom they’d not be shy about saying so. On the contrary, my understanding is that this niche within a niche corner of the market is proving exceptionally difficult for them.

And perhaps that’s not such a great surprise: while people will pay many tens of thousands to add some wildly desirable mechanical watch to their collection, so far as I am aware no one has ever paid big money for a purely motorised watch. There is an emotional dimension, that connection to the engineers who sweated blood perfecting all the cogs, levers and springs that make a perfect chronometric movement, that is simply missing.

That might change in time when there are no more mechanical cars to buy, and the truth is all car companies right now have very little choice but to embrace the EV. But they must do so more in hope than expectation that as they wrap their arms around each other, it doesn’t take the opportunity to sink its teeth into their necks.

The Bugatti-Rimac joint venture has also reignited speculation that VW is open to selling off the family jewellery in its massive push toward its own all-electric future. Investors have certainly not been shy questioning the sense of keeping not very EV-friendly brands like Lamborghini and Ducati under the corporate umbrella. As the FT reported yesterday: ‘…pressure from capital markets to divest these brands had been mounting. “The message is ‘forget the toys’” said someone familiar with the discussions between VW and investors.’ We will watch further developments with interest.