Are you, like me, old enough to remember when Ferrari was just a three-model company, and when the launch of a new one was an almost mythically rare occasion? Well today Ferrari will sell you a Portofino, a Roma, an F8, an 812 an SF90 and many variants of them too. Soon there will be an SUV to replace the Lusso and after that there will be an all-electric Ferrari too. And to this number of known Ferraris please now add one more: the new 296GTB. Despite it being a mid-engined two-seater, Ferrari is adamant it is neither a replacement for, nor an addition to, any existing product or range. It is another new model in its own right.

And it’s probably fair enough to see it as such. It doesn’t share any significant dimensions with anything else (indeed it’s actually smaller in all three dimensions and wheelbase than an F8), though its structure is clearly derived from the curious SF90 hypercar. But it lacks that car’s driven front axle (but gains a meaningful boot as a result) at one end, and places a 120deg 3-litre V6 engine at the other, while the SF90 and F8 use a 90 degree V8. It’s worth mentioning here however that the V8s and V6 have not only identical cubic capacities per cylinder, but identical bores and strokes too, so we expect there’s a quite a lot that’s been handed down to the little engine, which is only sensible.

The new engine does appear to be extraordinary, cementing Ferrari’s ongoing reputation as the master of the high-performance internal combustion motor. From just 2992cc it produces 654bhp, which Maranello claims to be a specific output record. Add the hybrid system and you’re looking at a total system output of 818bhp, all going through the rear wheels of the car.

This makes the acceleration figures likely to be a poor indicator of true performance. Take the 0-124mph time of 7.3sec: there’s no question that for at least the first half of that run the limiting factor will not be power, but traction. Even then, most of us can probably remember a time when 7.3sec was a pretty impressive time in which to reach half that speed. It also laps Fiorano in 1min and 21sec, which is the same as the track-focused F12 tdf and quicker than the 488 Pista and F8 Tributo. On the more practical side of things, the 296GTB can be plugged into the mains and its principal powertrain decoupled, allowing it to run for up to 15 miles on electricity alone, or at up to 84mph.

If there is a downside, it is that familiar Achilles heel of all plug-in hybrids: weight. Thanks to the removal of the driven front axle and the use of a 3-litre V6 in place of a 4-litre V8, the 296GTB is fully 100kg lighter than the near-1000bhp SF90, but it is also 140kg heavier than the F8 Tributo despite the latter’s V8, a weight gain of approximately 10%. Indeed while its 818bhp output seems to dwarf the 710bhp of the McLaren 720S, the Ferrari weighs 1470kg in ‘dry’ configuration with all lightest options fitted but the McLaren, by the same rules, weighs just 1283kg, meaning their actual power to weight ratios are separated by just 3bhp per tonne.

Part of the reason for this is that Ferrari remains unconvinced that a carbon tub is the way to go for mainstream production cars, preferring to stick with the aluminium structures it has relied upon for its mid-engined cars ever since the 360 Modena was introduced at the back end of last century. 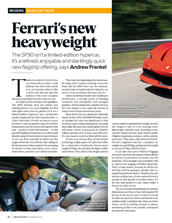 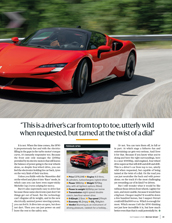 There is so much I could tell you about this car that I could dedicate the rest of this article to it, not mention what it’s like to drive and…

Visually the car is very neat, without obvious aerodynamic addenda, as the majority of its downforce is generated under the car and by a deployable rear spoiler. There are, quite deliberately, elements of 250LM about its rear wings too. The inside is similarly clean and, most importantly, uses the superb full-width high definition information screen first seen in the SF90. Ferrari owners who had cursed the clunky, unintuitive and messy infotainment systems used by its other models will be simply amazed at how beautiful and easy to use the new system is.

The 296GTB doesn’t go on sale even in Europe until the first quarter of next year and right-hand drive production always follows behind, so it’s likely we’ll not be seeing them on British roads until next spring at the earliest. When they do, the base price will be around £230,000, though of course none will actually be sold for that or, indeed, anything less than a quarter of a million minimum. Ferrari is not shy about encouraging its punters to get busy with the options list and, to be fair, very few of them need much persuading.

But even at £230k, this positions it clearly ahead of the F8 Tributo at £203,000, but also a veritable a bargain relative to the £375,000 SF90. When I drove the SF90, however impressed I was by its power and poise, I did wonder (and write) about how much better it would have been if it had been made lighter, cheaper and more practical by the deletion of its driven front axle. And the 296GTB is the car that does precisely that. Given the SF90 has barely a boot to speak of and its power to weight ratio of 628bhp per tonne is not so far from the GTB’s 556bhp per tonne, and given the fact that neither car will have a performance level you can actually exploit on a public road, the SF90 is a car in danger of being rendered an irrelevance by its new, cheaper, better looking little sister.