We should be grateful for the last 1000km race ever to be held for prototype sports cars at the old Nürburgring in 1983 because it was also the only one to be held entirely on the ‘Nordschleife’ northern loop, the ‘Sudschleife’ that was part of the course until then having already been bulldozed to make way for the ‘new’ Nürburgring. Because without that race, we’d not really have much of a handle on just how fast road cars can now get around that track.

The quickest to date is the 6min 43.6sec lap set by Maro Engel on November 4th this year driving a Mercedes-AMG GT Black Series. So park that figure in your head for a moment and join me back at the 1000km event in 1983. And what people tend to remember about the times from that race is the 6min 11.1sec lap achieved by Stefan Bellof, which stood as the fastest lap of the circuit for the next 35 years until Porsche and Timo Bernhard broke it with the 919 Evo in 2018.

But let’s discount both those laps for these purposes: Bellof’s was set during qualifying with qualifying boost and Bernhard’s using a car with no need to comply with any regulations. The actual race lap record was (and remains) the 6min 25.9sec lap achieved by Bellof just before he smashed the car to pieces. 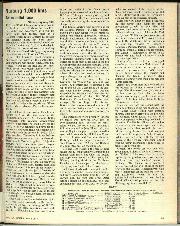 That car was a Porsche 956, chassis 005 if you’re interested. It was designed as a Group C prototype, as dedicated a racing car as a modern F1 machine. Unlike a modern F1 machine it was able to run full ground effect aerodynamics, generating awesome quantities of downforce, providing insane grip for its massive, Goodyear slick tyres. It would have also put a minimum of 650bhp underneath Bellof’s right boot, which, in a car weighing just 820kg gave a power to weight ratio of nearly 800bhp per tonne.

Now let’s compare the Mercedes in which Engel did his lap last month. It’s a road car, fully homologated (and therefore in lap time terms compromised) for road use. It has road car ground clearance and road car suspension geometry. Most importantly it also has road car tyres and no ground effect whatsoever. It is even more powerful than the 956 with 720bhp, but crushingly heavier too, the lightest quoted weight I’ve seen being 1520kg, some 700kg more than the 956. Which gives a power to weight ratio of just 474bhp per tonne.

So the question is, how the hell did it get within 17 seconds of Bellof’s fastest race lap, bearing mind that on a track of conventional length, like the full Silverstone Grand Prix circuit, the gap would likely be fewer than five seconds?

Another way of looking at Engel’s time in 2020 is that it would have been good enough for 7th place on the 1983 grid, ahead of one privateer 956 and only 1.5 seconds behind the time set by the 956 with the decidedly not shabby crew of John Fitzpatrick and David Hobbs.

What’s going on? Well a few things, some of the more obvious being that the AMG GT Black Series is clearly a bloody rapid car and Engel an exceptionally quick driver.

Less immediately guessed is that the track is quicker now than it was then. Some of the bigger jumps have been eased and I’d bet plenty the 2020 surface is faster than that used 37 years ago. Also Engel is not just a professional racing driver, he’s a Nürburgring specialist and outright winner of the Nürburgring 24 hours. Which doesn’t make him better or even as good as Bellof, but does perhaps offer part of an explanation why other cars that are quicker on paper but lacked drivers who knew the unique facility, as well as their own front driver, were eclipsed by his time. 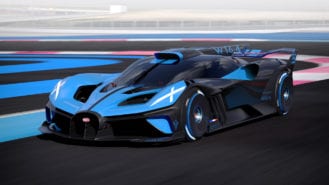 Fastest car around Le Mans (in theory), but Bugatti Bolide isn't that impressive

If you’ve not seen it already, Bugatti has announced a new car. Called the Bugatti Bolide, it makes all its products launched since the 986bhp Veyron in 2005 look somewhat…

And there’s the fact that, in accordance with the way all road car laps are timed today, a few hundred feet of the old pit straight is omitted from the timing.

But all of that can account for only so much of the car’s preposterous pace. Ask yourself this: how on earth did Engel manage to lap the Mercedes over 13 seconds faster in 2020 than Marc Lieb managed in 2013 driving a Porsche 918 Spyder, which has another 155bhp and a power to weight ratio of 533bhp per tonne, not to mention an optimal mid-engine configuration and four-wheel drive traction? That’s four times Nürburgring 24 Hour winner Marc Lieb.

Well you can rule out skulduggery: Mercedes was assiduous in its transparency: it disclosed every detail of the car’s set up and instead of providing its own timing – which is always open to challenge – had the car independently timed instead.

Having probably spent more time than is healthy thinking about this, I think Engel’s time is down to a combination of all the factors above, plus one enormous elephant that has so far sat quietly in the corner of the room. The tyres.

It would be hard to over-estimate how much street tyres for supercars over the last few years have transformed the game. Their appearance hasn’t changed much, nor have their sizes, but everything else about them – tread patterns, construction and above all, their compound – has changed beyond recognition. And of all the manufacturers it is the tyres of Michelin that have evolved most. 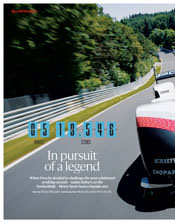 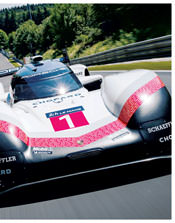 In pursuit of a legend

When Porsche decided to challenge the most celebrated of all lap records - Stefan Bellof's, at the Nordschliefe - Motor Sport had a ringside seat The familiarity of the scene…

To give you an idea, Michelin has no fewer than four tyres on offer to those who want road-legal rubber to use on track: the 4S, the Cup 2, and the Cup 2R in both hard and soft compounds. And that’s before you take into account the fact that the serious players like Mercedes and Porsche get Michelin to develop tyres specifically to suit the characteristics of their car. So Engel was on a set of soft Cup 2Rs designed exclusively for the car he was driving.

I’ve driven a few cars wearing Cup 2Rs, most instructively a Ferrari Pista around Anglesey, and I remember very well the Ferrari technicians telling me they’d be past their best from the point of view of setting lap times after five flying laps which, as it turns out, is just a little less than one flying lap of the Nordschleife.

So as we see these times tumble, I suspect that’s what we’re really looking at: great drivers in undoubtedly really rapid cars but wearing the road legal equivalent of qualifying tyres. Look at like that, perhaps those times are not so surprising after all. And whether they have any relevance at all beyond the circuit perimeter of the Nürburgring, I shall leave you to decide for yourself. 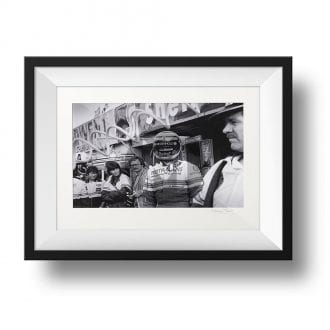