I know what you’re thinking. You’re looking at this all new three-wheeled Morgan and wondering where the hell the engine has gone. Well, it’s where you’d expect it to be were this any other front engine car in the world: under the bonnet. But Morgan three-wheelers always had their engines outside their bodies surely?

Surely not. The very first three-wheeled Morgans – and I’m talking 110 years ago – didn’t have JAP vee twins strapped to their noses, they came later. And then with the 1930s F-type, the motor disappeared under a bonnet again. So it’s not trampling on its heritage to put the engine back where it belongs.

The car comes a year after the Morgan Three Wheeler was put out to pasture after a pretty successful decade in production. I only drove two in that time – once on the road which I loved and once on the track where it scared me witless. And the truth is that by any objective standard, it wasn’t a terrifically good car, failing as it did in any dynamic measure to match what a company like Caterham might sell you for substantially less money. 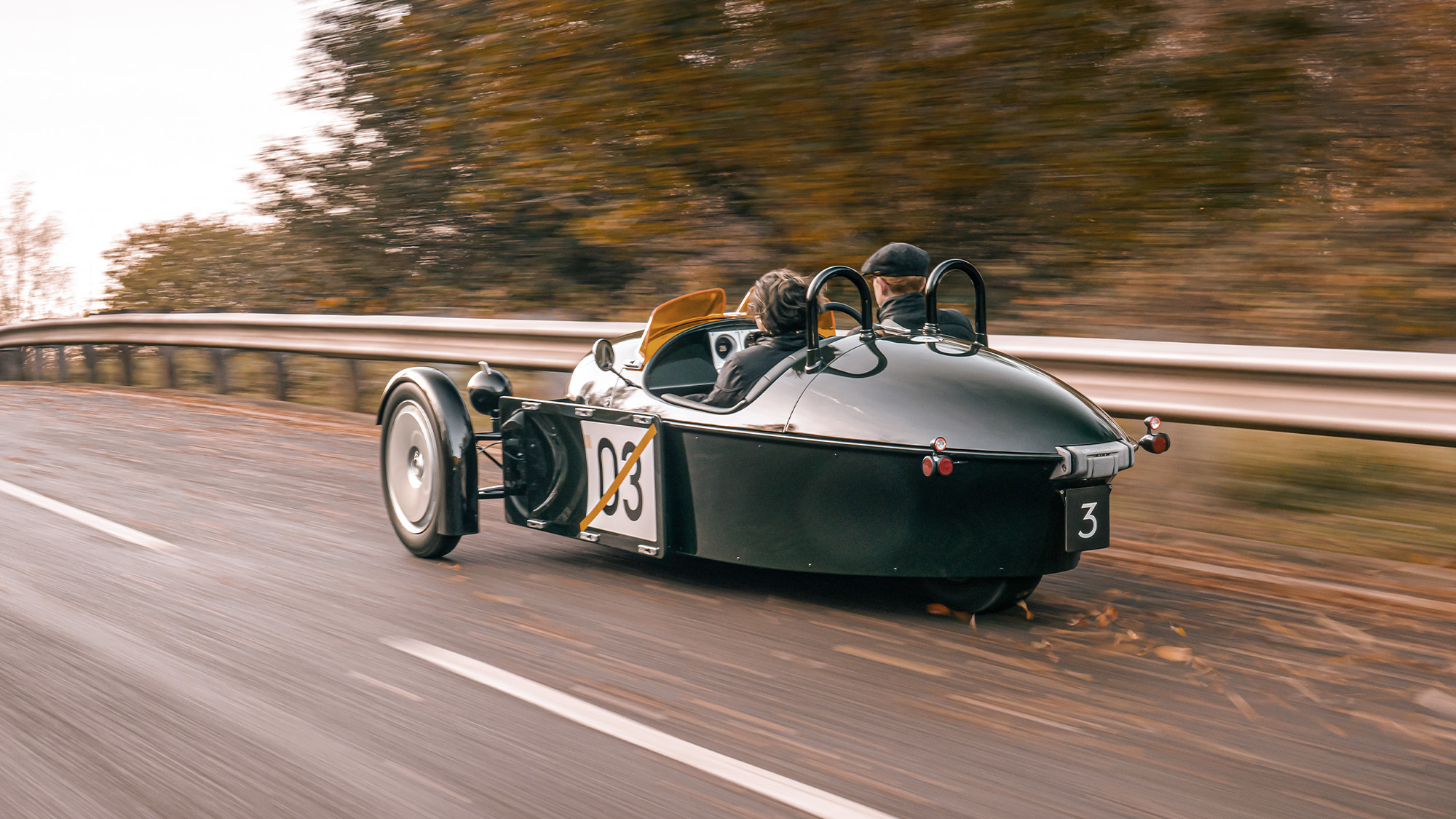 But when did Morgan ever build good cars? I’ve never driven one and there’s a part of me that hopes I never do. Because if you want to spend fifty odd grand on a really good two seat open sports car, you go and buy a Porsche Boxster. If you want a driving experience that, for both good and ill, is unlike any other, get a Morgan with only 75 per cent of the expected wheel quota.

And this is a very different kind of Morgan three-wheeler, so different indeed it’s even changed the name. For this is the Morgan Super 3, a name intended to evoke memories of the pre-war three wheeled Morgan Super Sports, but perhaps more likely to do the same for the recently discontinued Caterham Super 7.

But this is also the first Morgan built as a true monocoque, using a bonded aluminium Superformed platform. Like that of the old F-type, the engine of the Super 3 is provided by Ford, this time a 1.5-litre, three cylinder motor but without the turbocharger I associate with that engine, best known for its work in the Fiesta ST. I’m not aware of any Ford car on sale in the UK that offers this motor au naturel, but in the Morgan it produces 118bhp at 6500rpm, enough to propel the presumably traction limited Super 3 to 60mph in 7sec flat. All out it will do 130mph, which I’d expect to be a highly diverting experience. 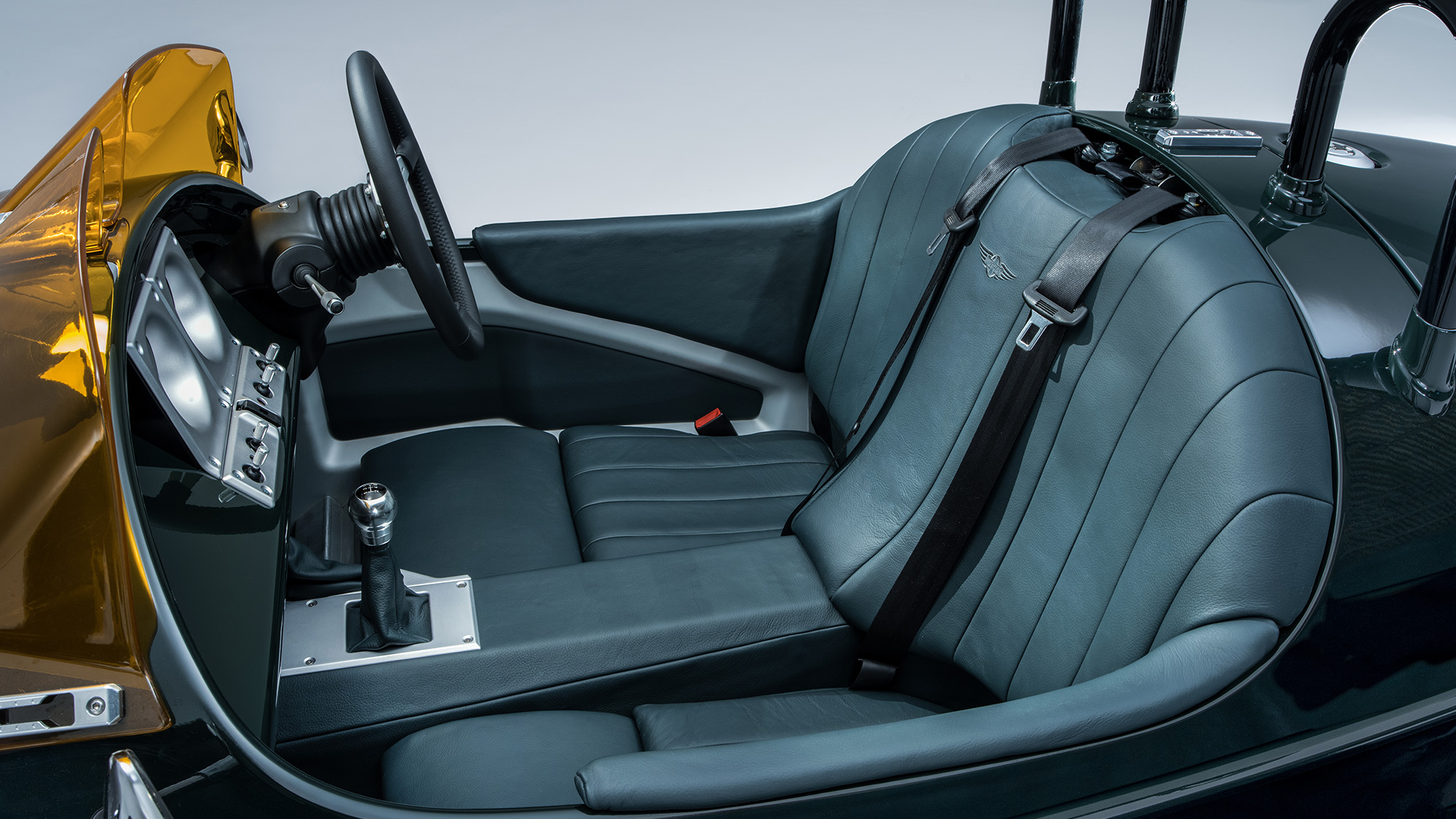 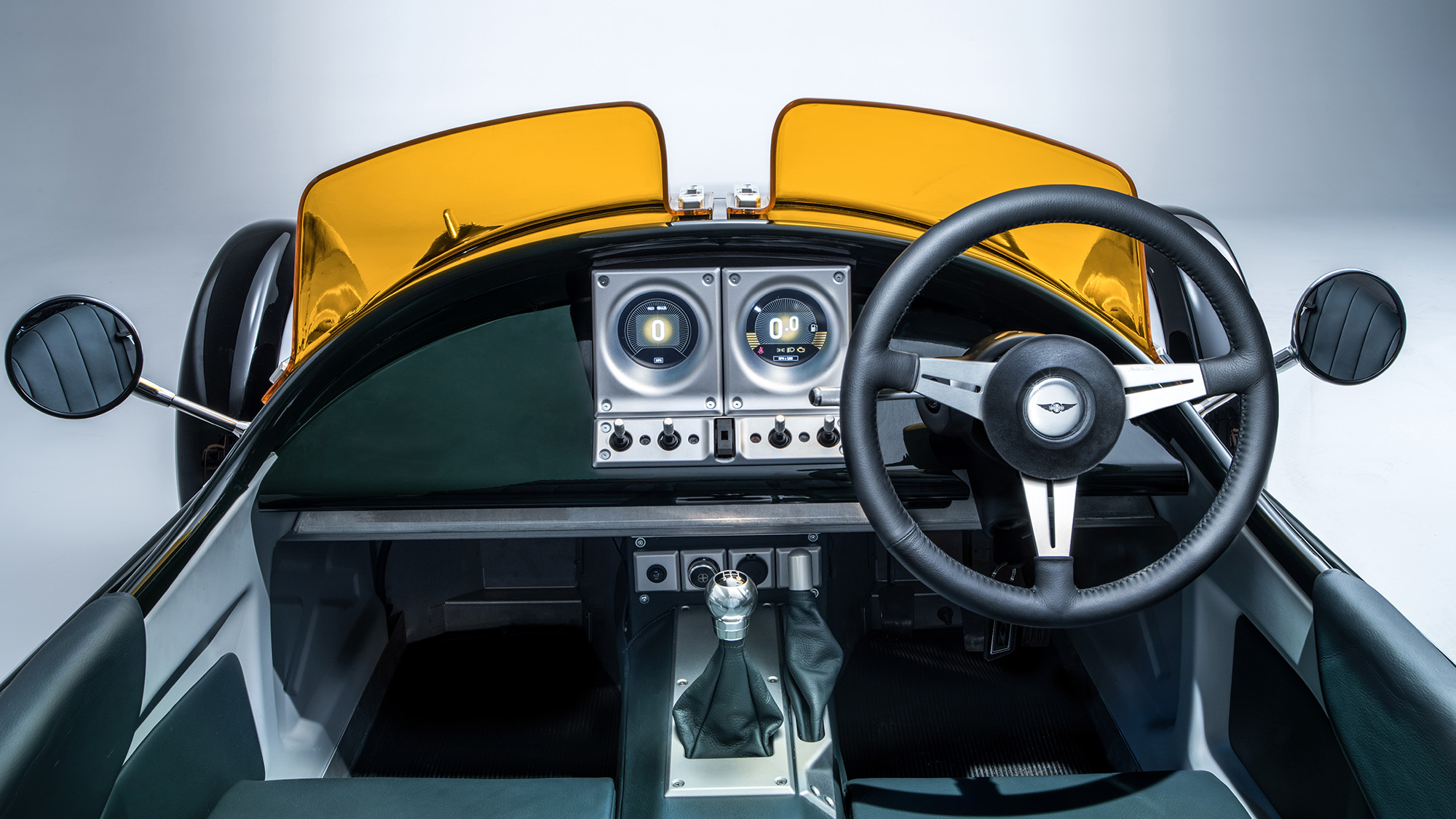 Digital dashboard is a first for Morgan

Compared to the outgoing Three Wheeler, the new car is both 110kg heavier at 635kg and a full second slower to 60mph, though the aerodynamic benefits of not having a chunky motorcycle engine in direct line of sight of the airflow has raised the top speed by 15mph.

The performance deficit is surprising, even given the additional mass, as the old engine was good for a pathetic 82bhp despite its 2-litre displacement. In power to weight terms, the new car is considerably superior, so I guess it must be the torque of the old engine that makes the difference.

Not that I expect said difference to be as great as it appears on paper or that a typical Morgan customer is going to care much one way or the other. And of course it does provide Morgan with an off-the-peg upgrade should it so choose, with 197bhp already used by the Fiesta there for the taking. Which should really get your attention. For now however the car is on sale now at the same £41,995 charged for run out version of the old Three Wheeler. But that’s before you start to play about with options and accessories, combinations of which Morgan ambitiously describes as ‘limitless’. 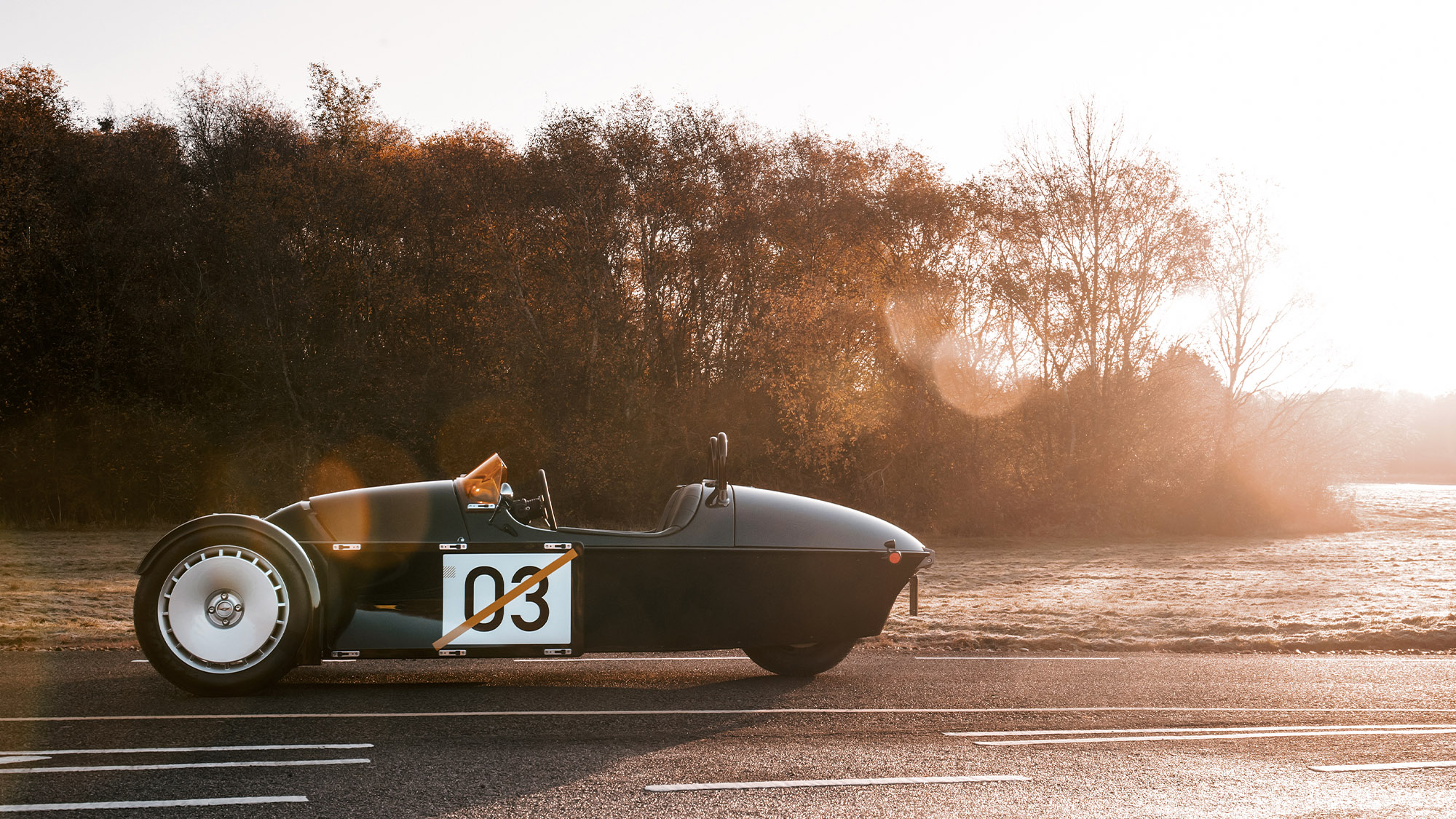 I’m a bit hesitant about pronouncing on the way the car looks and for a few reasons. First, it’s not something that I am any better placed to judge than you, so my opinions in such matters count for little. Second, I always like to see cars both in the flesh and, ideally, on the road before I make up even my own mind about how they looked, much less try to talk you around to my way of thinking. And finally, I absolutely loved the look of the old car and in purely aesthetic terms, was always going to regard the loss of a couple of oddly-angled cylinders standing proud of the bodywork as something of a retrograde step.

So I’ll keep it general and say that while the front looks really quite awkward to me, it gets better the further back you go. And the cockpit looks terrific, a minimalist’s dream, though I’ll wait to see how well the digital dials work and fit the character of the car before falling in love with those too.

Most of all, I’m just glad cars like this are still being made. Those who like to moan a lot about how the EV revolution is going to make all cars heavy and horrendous to drive will likely find the Super 3 the perfect tonic, so stripped back to the bare essentials, it has not only a naturally aspirated engine and a manual gearbox but even the minimum number of wheels required to prevent it from falling over.

But actually I can see the Super 3 working pretty well as an EV too, and it’s not the company’s first electric three wheeler either, as anyone who remembers 2016’s gorgeous EV3 concept car will attest. Think about it: why do people buy Morgans? It’s for their looks and image, not their dynamic capabilities, which is how Morgan managed to keep sliding pillar front suspension in production for over 100 years. But that’s another story. So the fact an EV powertrain might add a few kilos is unlikely to trouble them. Moreover, who’s going to drive a Super 3 for hundreds of miles at a time? Basically no-one. So range isn’t an issue, so smaller batteries can be used and much of the weight disadvantage offset. And as all live in garages, there’ll be no problem with charging at home either.

That, however, is all for the future. I look forward to making my acquaintance with the Morgan Super 3 at the earliest opportunity. Whether good, bad or somewhere in between, it’s just one of those cars I’m simply glad exists.