His status as a Le Mans legend is now untouchable, but in Derek Bell’s formative racing days, one foe seemed to stand behind him and glory: his “nemesis”, Formula 1 ace Clay Regazzoni.

Bell might be now be more synonymous with La Sarthe, and the Swiss driver indelibly linked with Scuderia Ferrari, but there was once a time when both rubbed shoulders regularly on the junior European single-seater circuit

“I had many great rivals over the years, but the one who stands above the rest has to be Clay Regazzoni,” he told Motor Sport in this month’s issue.

“He was my nemesis in both Formula 3 and Formula 2 in the late 1960s and early ’70s. Clay was a hard racer – you never knew exactly what he was going to do.” 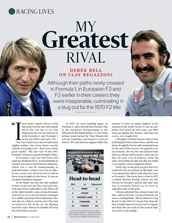 “I had many great rivals over the years but the one who stands above the rest has to be Clay Regazzoni. He was my nemesis in both Formula 3 and…

Bell describes being one of two cars taken out by the future five-time grand prix winner in a last lap skirmish at Hockenheim in 1967, Regazzoni managed to finish 0.5sec behind with Kurth Ahrens Jr with bodywork flailing off his F3 car.

“It was a crazy race, all of us nose to tail on those long straights in the forest,” remembers Bell. “It was an accident waiting to happen.”

Three years later and the British-Swiss showdown occurred once more, this time in F2. Whilst Bell was running a privateer Brabham out of a farm in Sussex, Regazzoni was backed by the big guns.

“We only had one engine while Clay seemed to have as many engines as he wanted in the works Tecno,” says Bell. “It was an epic battle that lasted all year long, our little team up against the Tecnos, and Clay was a very, very tough rival.

“I thought I had him beaten when I won at Montjuich Park in Barcelona, and he was down in eighth, but he still overhauled me by the end of the season. Yet again he was my nemesis. He was the one I had to beat and you always had to keep a close eye on him. He took a lot of chances, some big risks. Everything he did was flat out while I was maybe a more balanced driver.”

Eventually both drivers went on to have very different careers, Regazzoni winning F1 races for Ferrari and Williams whilst Bell sealed himself into endurance folklore by taking five overall wins at Le Mans.

The latter asserts respect always remained between the two though.

“I always admired him and we became very good friends,” Bell says. “The [fatal] car crash on the road in Italy was such a sad ending.”