Lewis Hamilton’s win at Sochi this weekend brought finally brought him to a century of wins. 100 victories indicates not only an almost otherworldly level of performance, but also a particular type of genius that only a handful of competitors in professional sport possess – namely, an unquenchable thirst for victory combined with an ability to do so in a variety of ways: where there’s a will, there certainly is a winning way and his latest victory was a perfect demonstration.

For every gaggle of crushing Hamilton wins, there’ll be one which he had no right no to claim his own, in which he should’ve been down and out way before the chequered flag, but someone how found himself on the top step when the Carmen prelude rang out and the fizzy pop rained down.

We have collated a few of these wins in a category belonging to HAM himself: 10 races Lewis Hamilton shouldn’t have won, but he did. 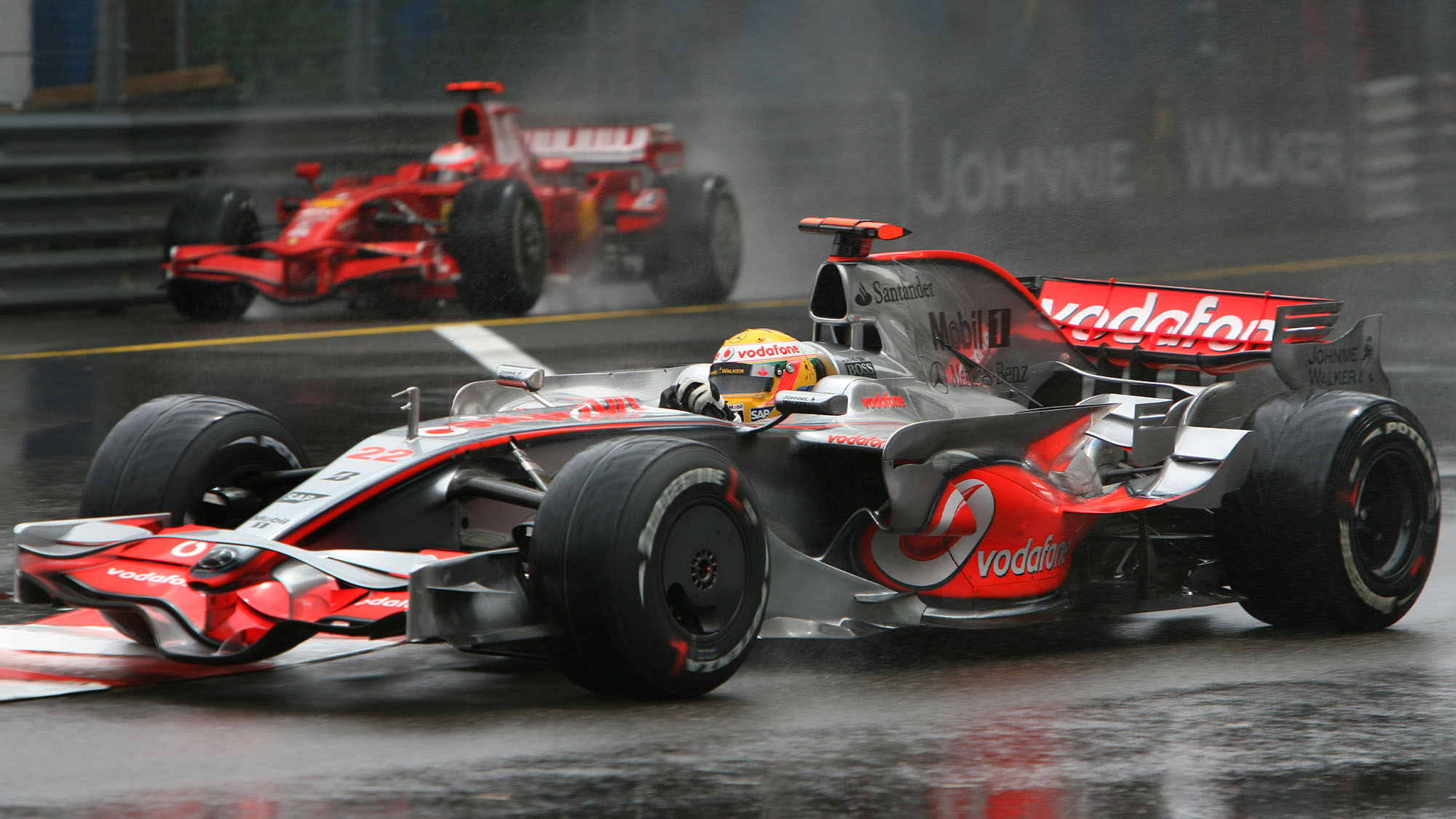 Likely endemic of all sportspeople that bristle with charisma, Hamilton somehow manages to bring a Hollywood-esque storyline arc to many of his race wins, and Monaco 2008 is probably the first of these.

Of course, the seven-time champion isn’t perfect and makes his fair share of mistakes, which often leads to some of his most thrilling grand prix performances. This was the case on the rain-soaked streets of the principality early on in his second season, when he struck the outside barrier exiting the Tabac, whilst running second.

The subsequent puncture and pitstop meant Hamilton dropped to fifth, but from there the race came to him. Alonso suffered a similar fate to his former McLaren team-mate, sliding agonisingly into the barrier at Massenet whilst running fourth, before David Coulthard and Sébastien Bourdais crashed in sympathy together at the same corner, bringing out the safety car and bunching up the field.

A starting infringement and resultant drive-through for Kimi Räikkönen brought Hamilton up to third, before a pitstop for Robert Kubica put him second behind Felipe Massa. Others were having to pit whilst the unintentional early pitstop for the McLaren driver meant he had already fresh rubber.

Ferrari then pitted Massa once too many times, giving him wets when they thought more rain was coming, handing Hamilton his first unlikely win. 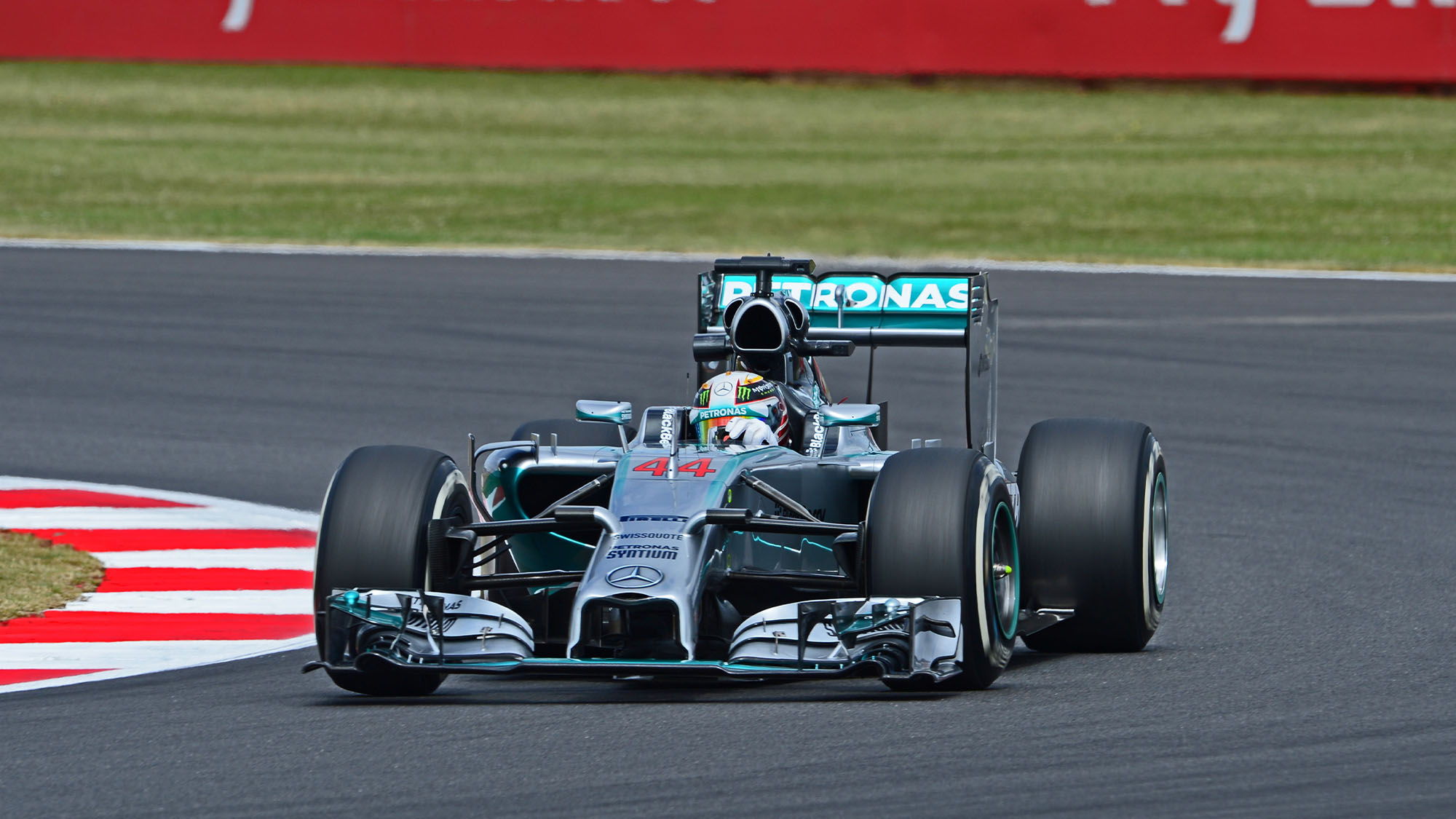 Hamilton made up for a poor qualifying at Silverstone in 2014

As a green track continued to dry in the first Silverstone race of the hybrid era, Hamilton abandoned his final Q3 run, feeling there was nothing to be gained.

He was wrong and team-mate Nico Rosberg deservedly snatched pole for himself, with the Brit down in sixth at his home race.

Räikkönen kept his foot in it whilst going off-track down the Wellington straight and paid the price, tank-slapping his way into the barrier.

After a delay of over an hour, a wound-up Hamilton leapt past the cars in front to be right behind Rosberg by lap four.

Urged on by the crowd, not even a slow pitstop could stop Hamilton in his Mercedes as he hunted down his team-mate.

He needn’t have hurried – a gearbox failure took out Rosberg, and Hamilton struck to take his second Silverstone win.

Starting behind the two-stopping Finn, Hamilton managed to go on a one-stop and maintain the same pace. A safety car then made things easy, giving Hamilton another stop. 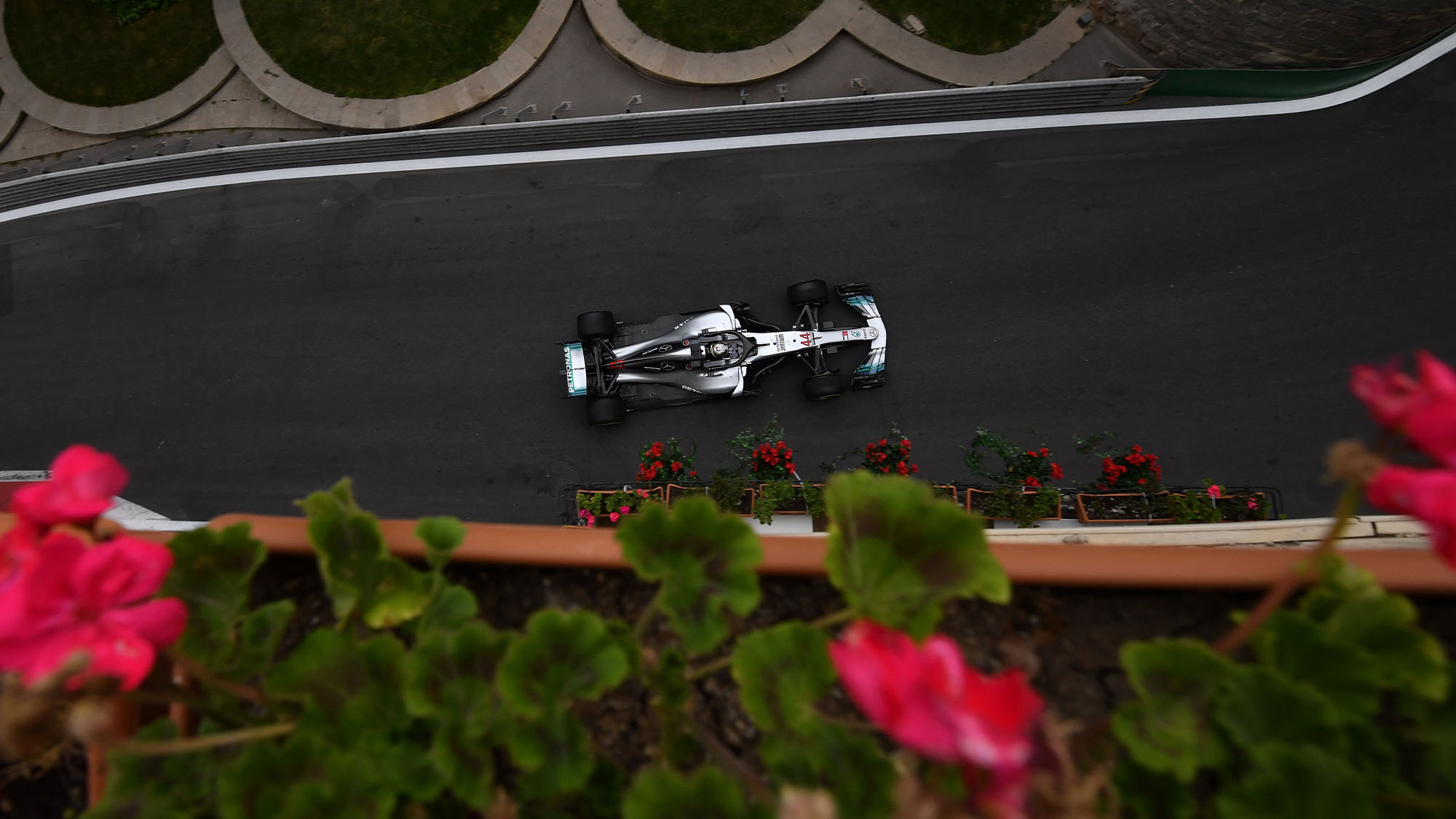 Everything somehow came up roses agin for Hamilton at Baku ’18

Baku ’18 should have belonged to Valtteri Bottas. Opening lap carnage left Alonso to drag his double-punctured McLaren back to the pits, after which he probably told the team “this was my greatest lap ever” for the nth time, as Räikkönen dumped Ocon into the barriers on the same lap.

Verstappen and Ricciardo went at it lap after lap, but the Red Bull skirmish eventually ended in tears with the Australian rear-ending the Dutchman into the first turn and taking both out the race.

Grosjean then dropped his Haas into barriers under the safety car, prompting the famous “I think Ericsson hit us” line.

All this left a huge amount of debris on the track, which the Finn ran over on the pit straight with three laps to go, handing the win to Hamilton.

The Brit shouldn’t have won, but as ever, he somehow did. 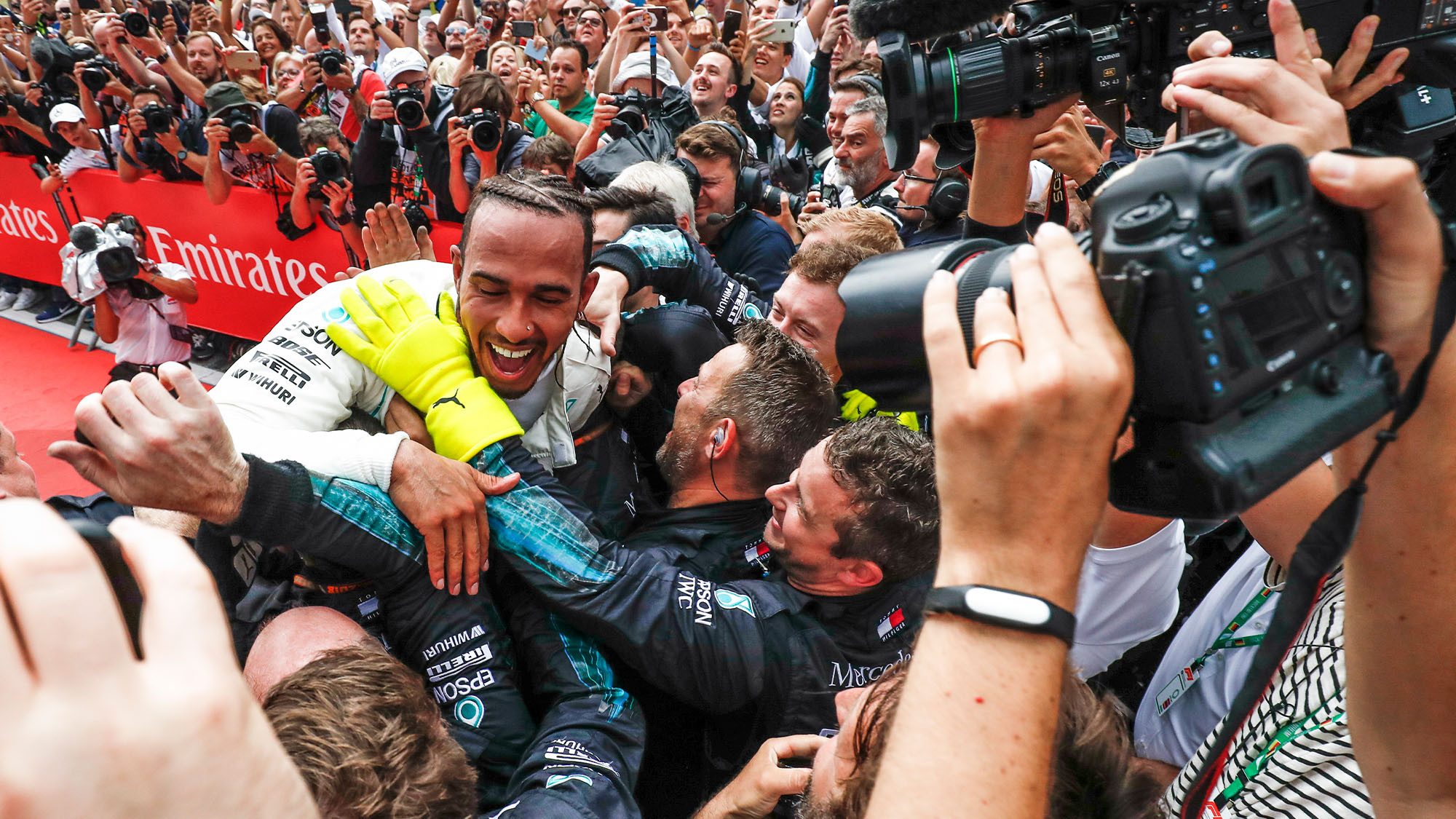 14th on the grid? No problem for Hamilton in Hockenheim

A hydraulics issue left Hamilton 14th on the grid, but this set up one of this most unlikely and arguably one of his greatest wins.

The Mercedes driver picked off cars lap by lap, until he was right behind Ferrari’s Räikkönen in fourth by lap 14.

Bottas pitted to put Hamilton third, and then the heavens opened, quite appropriately, on lap 44 – the same as Hamilton’s famous car number.

Everyone stayed out and tip-toed round in an attempt to weather the inclement weather, Hamilton now in fifth after bolting on a set of ultra-softs.

Then with 16 laps to go, and with a nine second gap over Bottas,Vettel binned it into the barrier in front of his home crowd.

The safety car was out, and a lengthy committee meeting-style Mercedes pitstop dropped Bottas to second, whilst even more confusion led Hamilton to drive across the pitlane entry grass in the midst of conflicted radio messages.

Hamilton was in the lead once the green flag fell, holding off some spirited overtaking attempts from Bottas to take yet another unlikely victory. 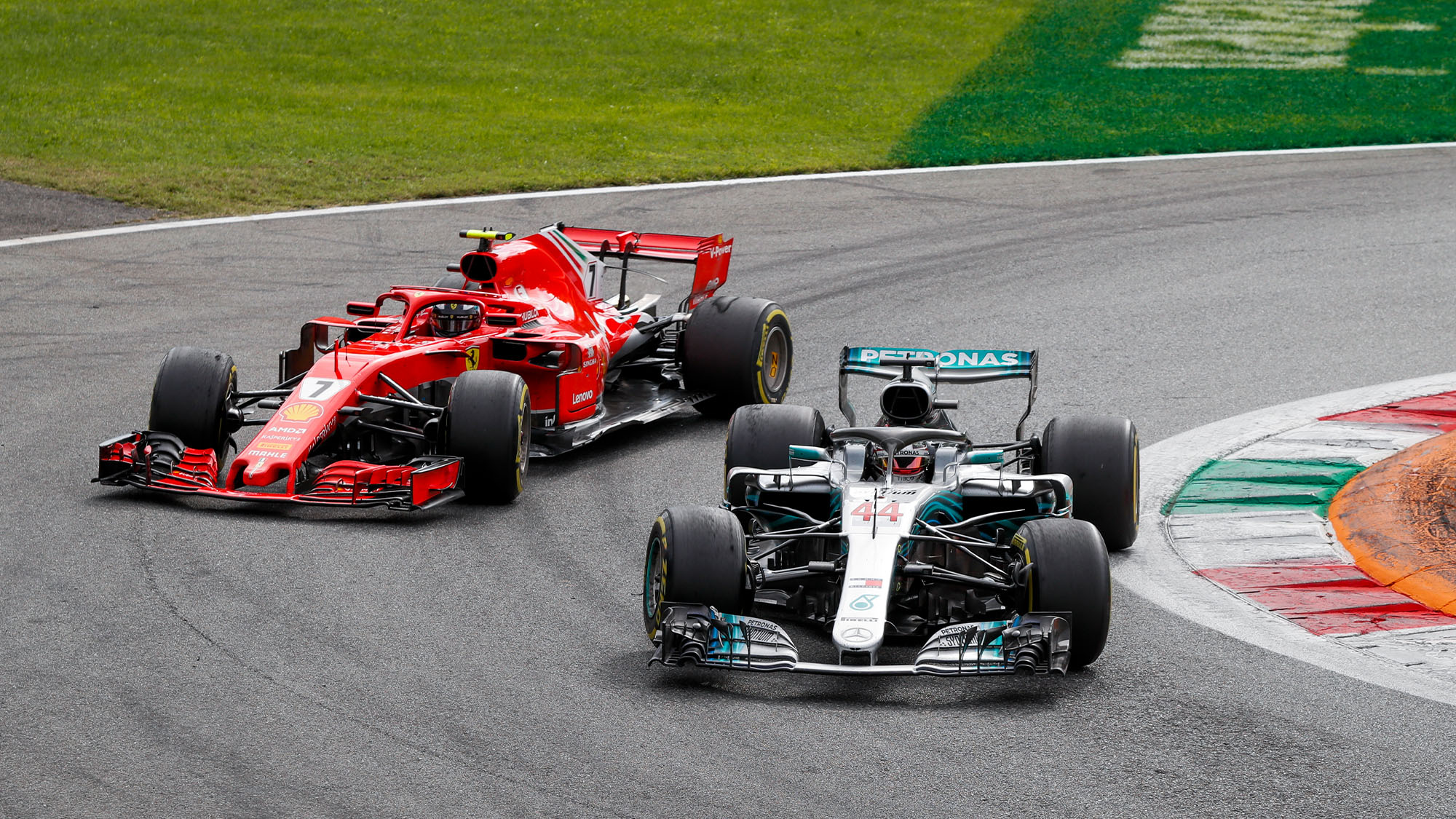 Hamilton saw off Vettel, then eventually nailed Räikkönen too at Monza

A Ferrari front-row lock-out at Monza – it should’ve been a straightforward home win for the Scuderia. Not if Hamilton was involved though.

The red team did admittedly get itself slightly crossed up in qualifying, sending out Räikkönen behind championship contender Sebastian Vettel, meaning the Finn slipstreamed his way to pole. Not ideal when you need your main man to win.

Hamilton took advantage. Räikkönen slightly baulked his team-mate in the first chicane, meaning the Mercedes had a run on Vettel through Curva Grande and the second stop-start.

Hamilton drew alongside his Ferrari rival, and Vettel was unable to hold out, spinning after slight contact.

End of lap three and Hamilton was upon Räikkönen, slipstreaming down the main straight. A little jink to the left to show his authority and the Mercedes was through, but then Räikkönen fought back at the next chicane, claiming the lead once more.

The battle waged on throughout the race, but by lap 45 the Ferrari’s graining left rear had become too much to handle, Hamilton got by at the start of the tour and then sailed on to win at the ‘Cathedral of Speed’.

It should’ve been Ferrari’s day but, as so often has been the case, it was Hamilton’s. 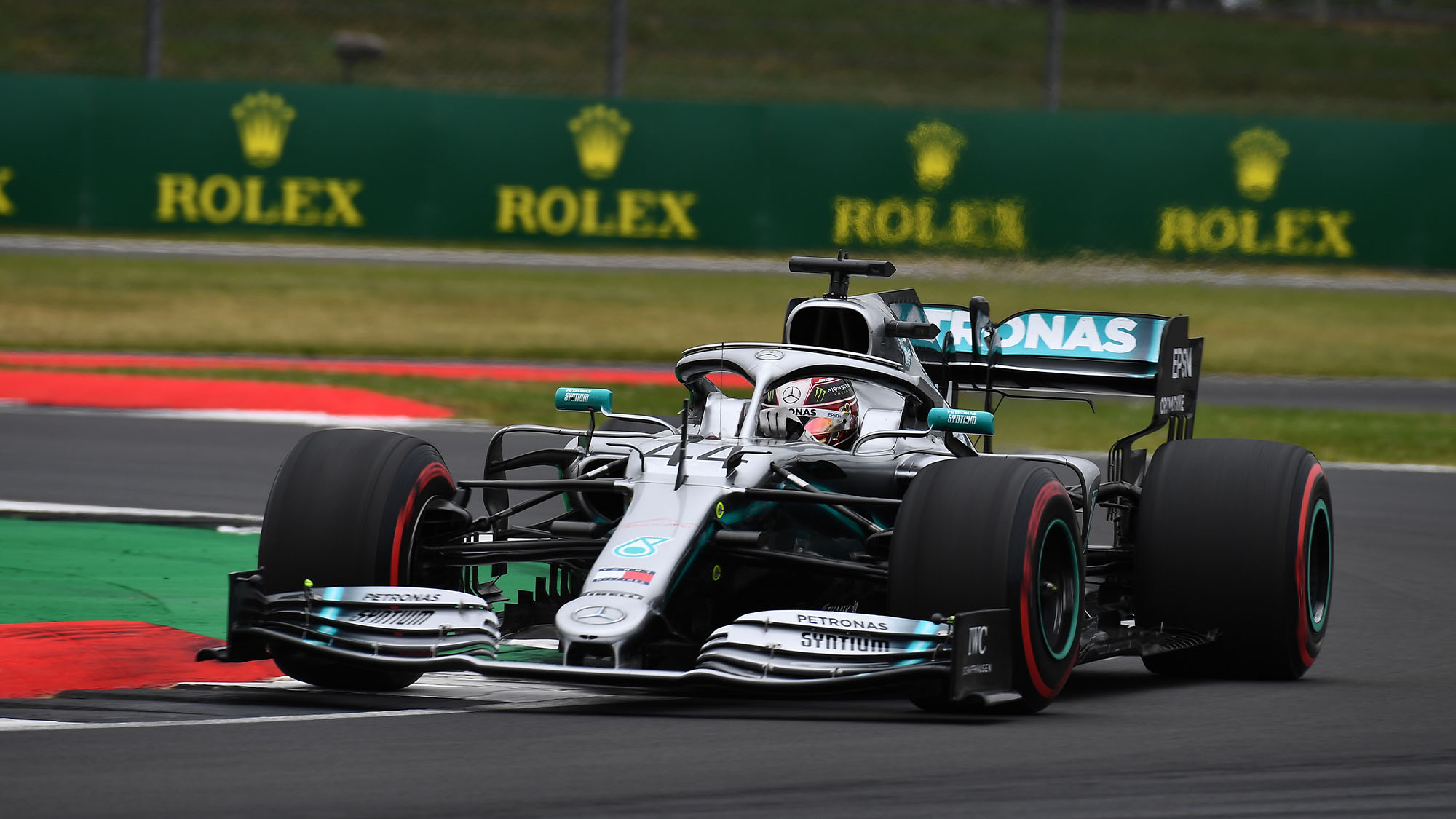 Hamilton made a one-stop look easy against Bottas

Bottas was on pole in Britain, but Hamilton had a plan.

Starting in second, Hamilton thought he had the pace and Pirelli preservation ability to go at the same pace as a two-stopping Bottas, but with just one stop, thus giving him track position.

He was right, but a safety car made it all too easy, giving Hamilton a free stop and an easy lead.

The Brit took another home win, once again showing that uncanny ability of ‘right place, right time’ to claim another unlikely win. 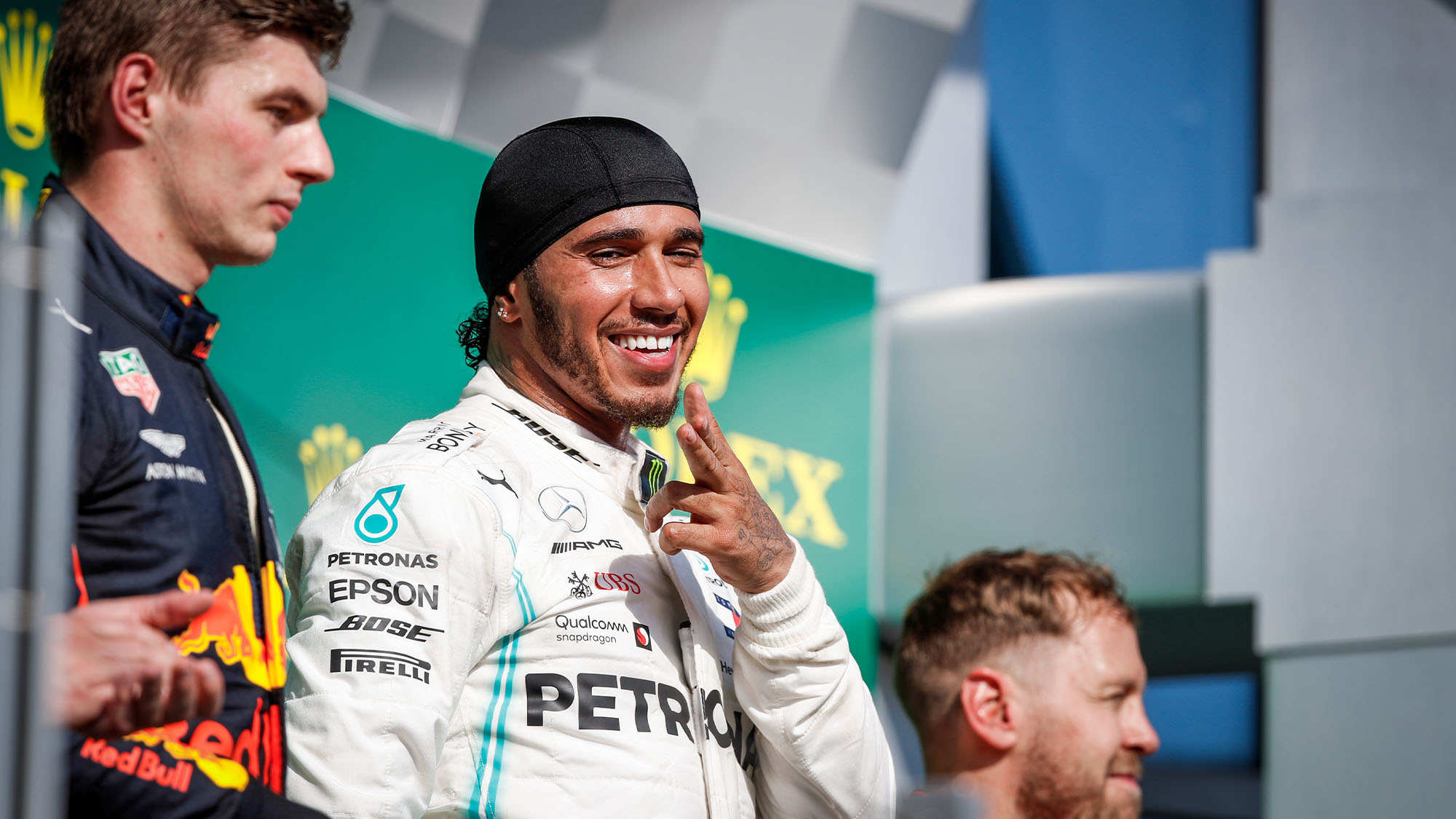 Verstappen was powerless to stop an oncoming Hamilton in Hungary

Hamilton has now won more races at the Hungarian GP (nine) than any other F1 driver at any other race, but his efforts at the ’19 edition were another example of him using his superhuman performance to come home first.

Verstappen started from pole with Hamilton third, the Brit brilliantly driving round the outside of Bottas to slot into second after Turn Two on lap one.

The Red Bull driver kept his advantage after what was supposed to be the first set of pitstops, then managed to stay ahead in a dice with Hamilton through Turns One and Two after he was baulked by Daniel Ricciardo’s Renault.

Hamilton then tried to go round the outside at Turn Four but was seen off the track by the Dutchman.

Come Lap 49, and Mercedes decided to roll the dice. The team brought in Hamilton for a new set of medium compound tyres, giving him 20 laps to make up the margin, needing to make a gain of over a 1sec a lap – then pass Verstappen.

Come lap 67, that’s exactly what happened. Hamilton swept past the Dutchman, his speed having made Mercedes strategy work. 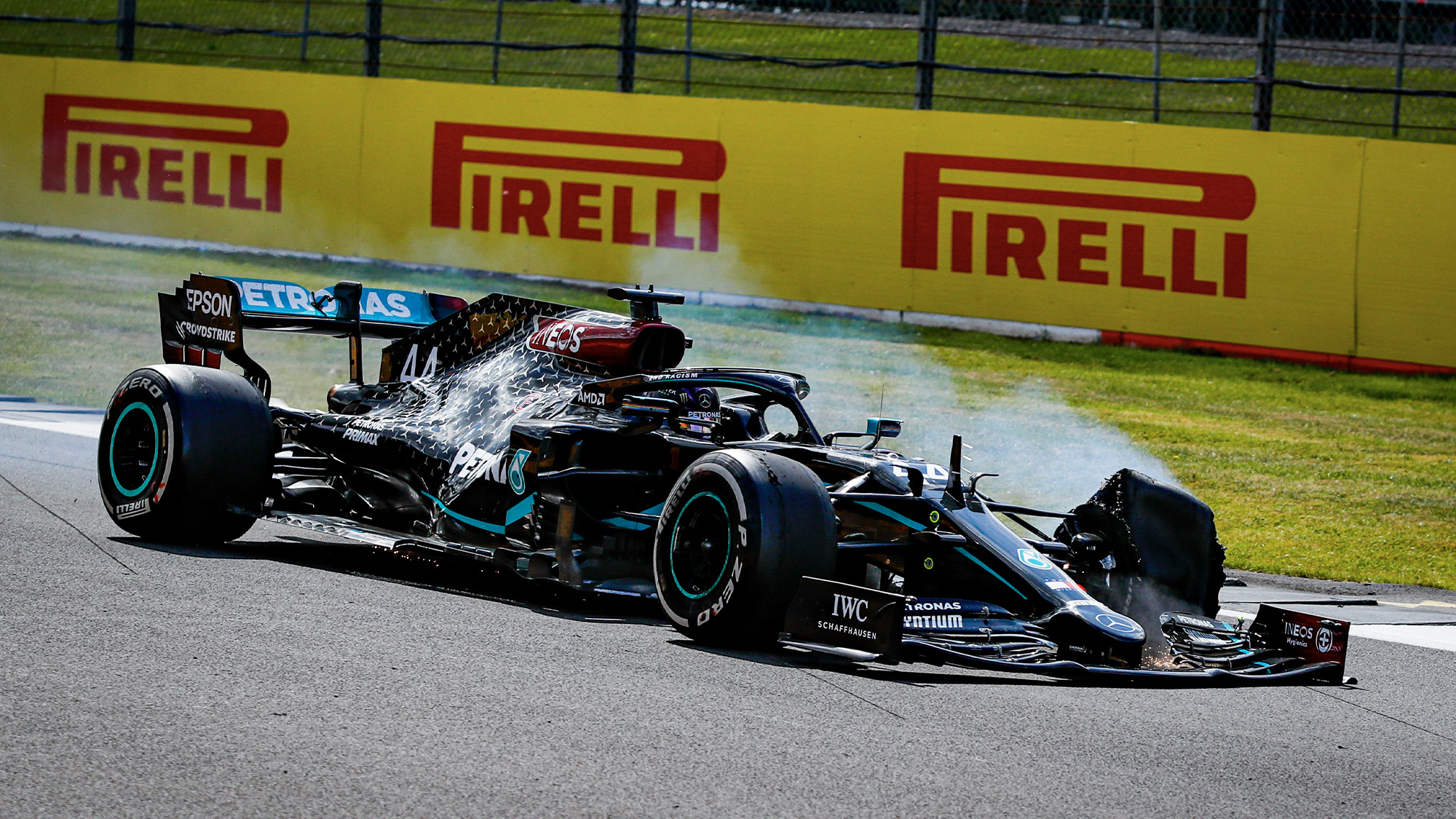 This should’ve been a routine win for Hamilton and co, but it instead became one of his –and F1’s – most iconic.

The fact that team-mate Valtteri Bottas suffered the same flat-tyre fate as Hamilton but instead finished way down in 11th says a huge amount about the Brit’s speed and knack of being in the right place at the right time.

With four laps to go Bottas’s left front went flat, his Pirelli crying no more as it simply disintegrated. Hamilton was ordered to go slow to stop himself suffering the same misfortune, but it was to no avail.

With five corners left it happened, Hamilton’s left front giving up the grand prix ghost. Spark flew as the W11 snaked across the track, the reigning champion desperately trying to hang on as Max Verstappen bore down on him, looming in the back of TV shots as those at home (the race was held behind closed doors due to Covid-19) urged him on.

The home-race hero just about managed to win with a margin of six seconds, unfortunately robbing Stefan Johansson of ‘coolest F1 finish ever’, making it one of his most memorable wins. 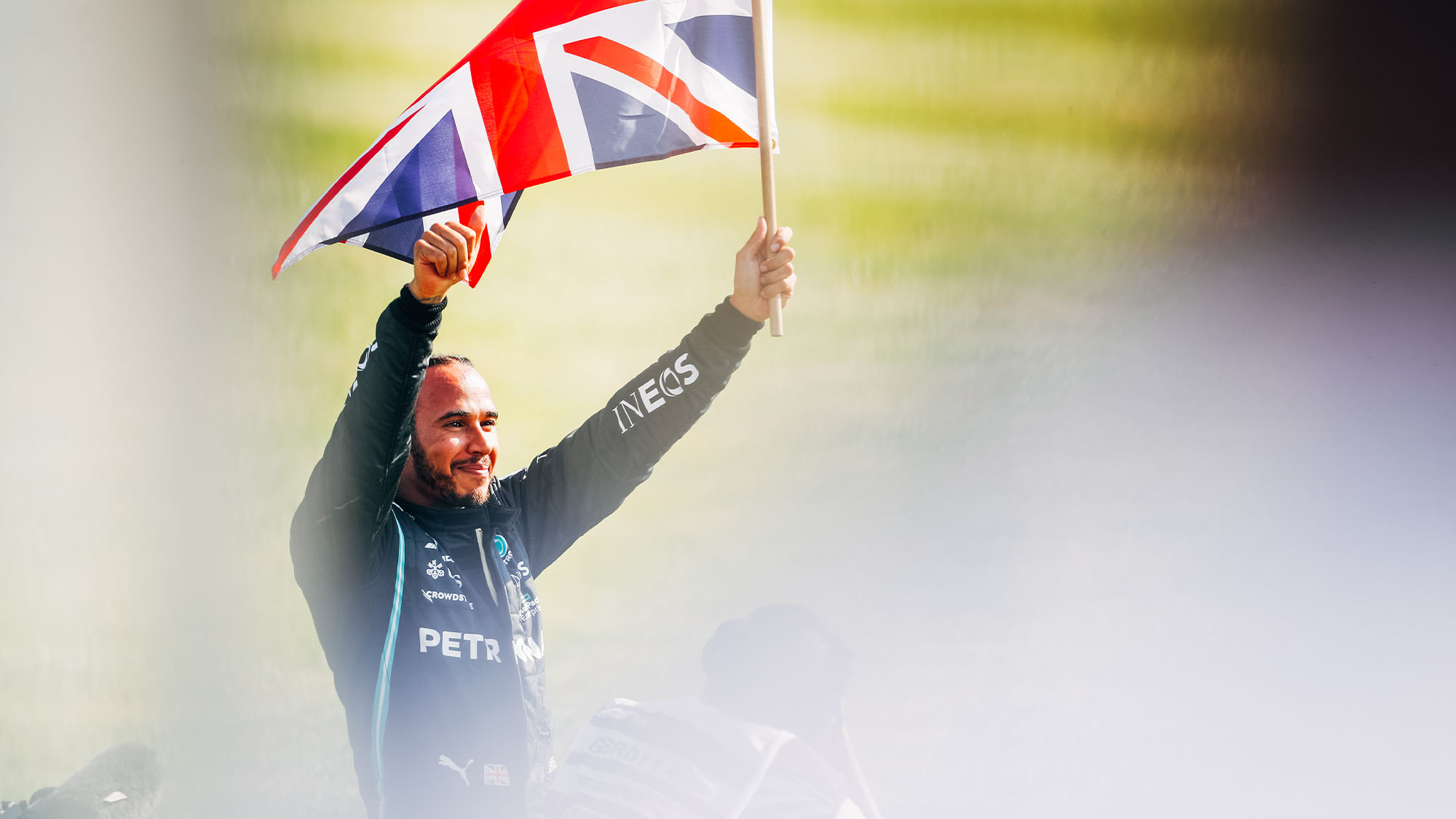 As the F1 circus pulled into Northamptonshire earlier this year, Hamilton could feel a record eighth title slipping away from him.

Second after the first ever sprint qualifying, the man from Stevenage knew he had to get ahead of pole-sitting Max Verstappen at the start if he was to have any chance of winning.

The Mercedes tried to get ahead at Abbey, but no luck. The Dutchman then squeezed Hamilton as he attempted to get past on the Wellington Straight, the Red Bull again winning out.

Not to be deterred, Hamilton drew alongside Verstappen down the old start/finish straight, squeezing into tightest of gaps on the inside before the two – now infamously – connected, sending Verstappen into the barriers and the slowed Mercedes into second.

Hamilton was slapped with a ten-second penalty, but as is usual, wasn’t to be put off. He gradually picked his way through the field once more before all that stood between him and victory was a shaky Leclerc, plagued by engine issues throughout the race, to pass for the win.

The Mercedes driver did it with four laps to go at Copse, the Ferrari suffering a snap of oversteer and allowing Hamilton through to claim a record eighth British GP victory.