It was always going to be a momentous day. Since reopening the Donington Park circuit in 1977, driving force Tom Wheatcroft had pledged to bring Grand Prix racing back there for the first time since the Silver Arrows captured local imagination in the 1930s. 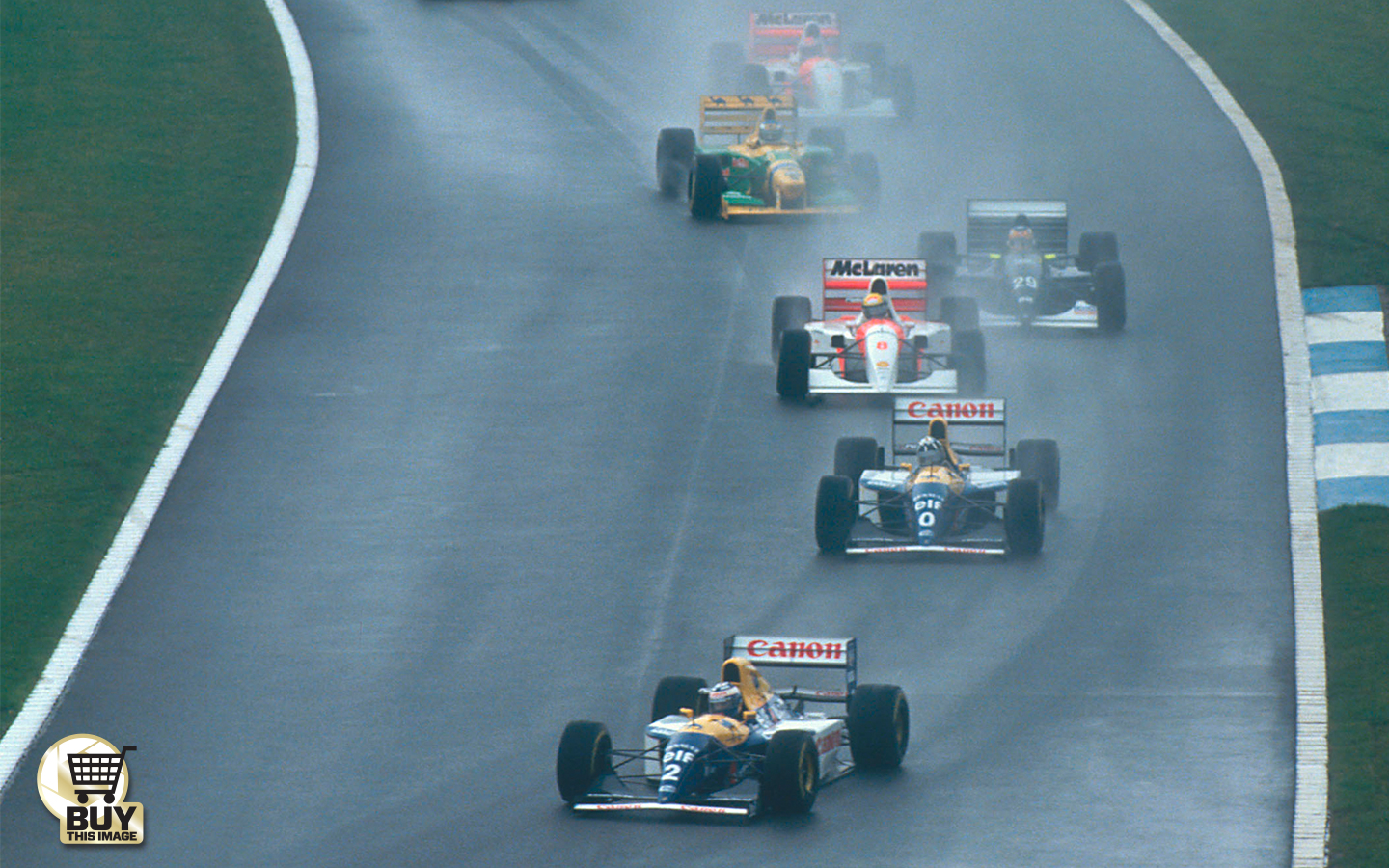 Mission accomplished. Wheatcroft defied medical wisdom to attend – he was recovering from a recent heart attack – but that was too great a trifle to keep him away… or prevent him completing a pre-race demonstration run (via a gravel trap detour) in a Mercedes-Benz W154.

The mood was bright, but the same could not be said of the conditions. The Williams-Renaults of Alain Prost and Damon Hill had dominated Saturday’s sun-dappled qualifying, but now things were distinctly British Racing Grey. Prost and Hill led away, while serial nuisance Ayrton Senna made an uncharacteristically sluggish start from row two and was scrapping for fifth place as the field scrambled through Redgate for the first time. When he reappeared at the same spot 90-odd seconds later, he led by several lengths. Where others wondered about grip on the greasy surface, he’d simply found it and sliced his way to the front. Such was the Brazilian’s lead that McLaren assumed Prost must have been off the road – which he hadn’t.

It was the opening gambit in a topsy-turvy, rain-affected afternoon during which pit stops were fumbled – and also made unnecessarily in the frequently changing conditions. Prost came in seven times (once with a puncture), Hill six and Senna five… although the latter didn’t actually stop during one of those, netting him fastest lap as an unforeseen consequence of Donington’s pit layout. A sticking left rear wheel cost Senna time during his third stop, but for most of the afternoon he remained in firm control as he went on to win by more than a minute from Hill, with Prost a lapped third. Afterwards, the Frenchman listed all the things he felt had compromised his race. At that stage McLaren was using a customer Cosworth V8 to counter Williams’s Renault V10, so with comic timing, Senna turned to his nemesis and said, “Maybe you should change cars with me.”

Despite being on the back foot, he’d won two of the campaign’s opening three races – Interlagos and now Donington – in awkward climates.

There were other fine cameos, too. In only his third F1 start, Rubens Barrichello mastered the conditions to haul his Jordan-Hart from 12th on the grid to run as high as second on the road, although his chances of a top-four finish were dashed by failing fuel pressure with only six laps remaining.

And Johnny Herbert proved that multiple stops weren’t really necessary at all. The Lotus driver switched from wets to slicks at the end of lap 10… and stayed out thereafter. “You couldn’t really tell what the weather was going to do,” he said, “so I thought it best just to keep going.” His persistence was rewarded with fourth place.

It was Donington’s only post-war Grand Prix to date – and it lingers still in the memories of all who attended. SA 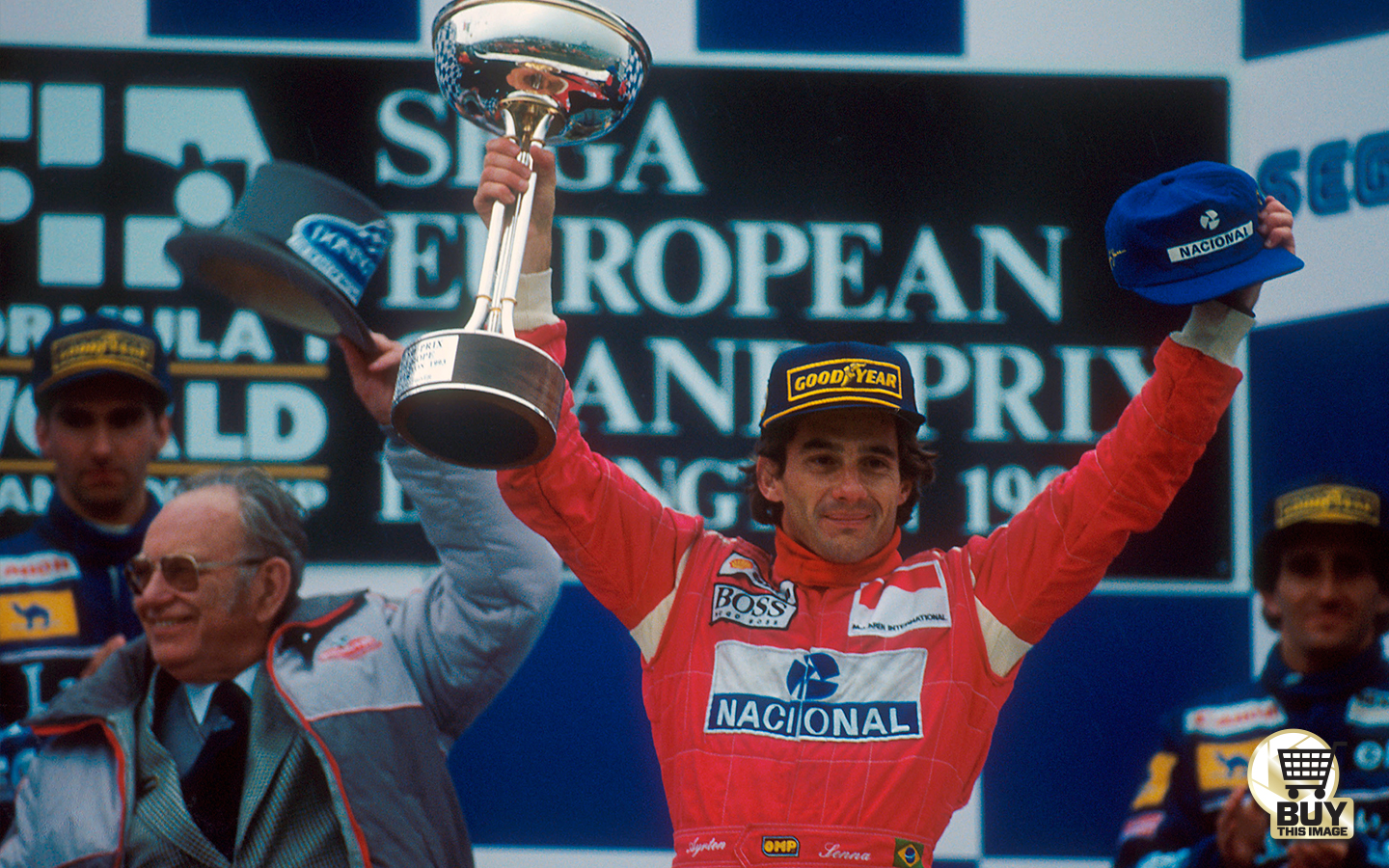