The 2005 San Marino Grand Prix has stood the test of time as being one of the all-time great battles between two championship-calibre drivers.

16 years on from Fernando Alonso and Michael Schumacher’s showdown at the Autodromo Internazionale Enzo e Dino Ferrari, the duel between the two is cited as one of those epic races despite there being no overtake at the death. Just two of the top drivers in the world at that time going head-to-head.

At the time, Symonds was in charge of strategy at the Renault F1 Team and in a race that was won by just 0.2sec, strategy played an important role but ultimately a secondary one to driving brilliance.

“To me that’s a perfect race. I mean this particular race happened cause Michael was a long way down on the grid. I really liked the races where you get very different performance profiles on the car so one car’s faster at the beginning another one is slow. Then it swaps round and the net result is in the last few laps everyone comes together and you’re never quite sure what’s going to happen.”

After years of Ferrari domination and on the back of a 2004 season that was settled at the mid-way point of the season, Renault started 2005 undefeated. Wins at the first three rounds meant confidence was high heading to San Marino, but the famous battle might not have even happened at all.

During the preceding Bahrain Grand Prix, weather conditions were typically hot but unusually dry too. Alonso’s car developed an issue with the engine due to the conditions and the problem was uncovered by the team ahead of the San Marino race. 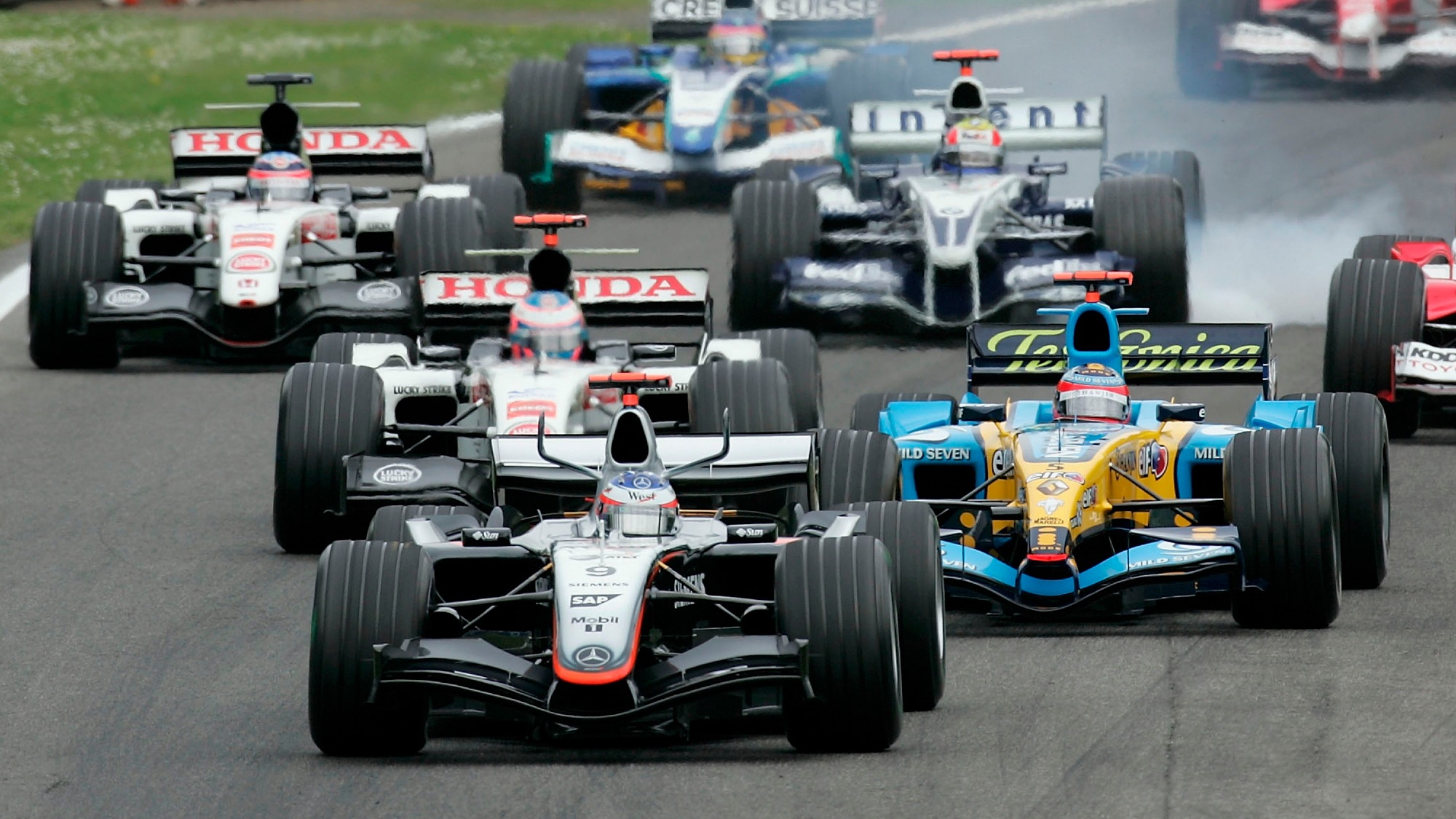 Räikkönen’s lead was short-lived as he retired with a broken driveshaft, leaving Alonso to take point

Debate was ongoing over whether or not to take a grid penalty and replace the damaged engine, but a unique test carried out meant a change was not deemed necessary.

“After the Bahrain race, engines were inspected and it was seen that there was detonation on one of the pistons on Fernando’s engines,” Symonds remembers.

“Renault did a remarkable thing. On a single-cylinder engine, they put the piston in and they ran the engine under conditions to get detonation.

“Then they popped the head off, had a look at the piston and they kept going until they had damaged the pistons to the same extent as the one that was in the engine post-Bahrain.

“They then took that piston and built it into a full engine, ran a simulation of Imola to see whether it would last and what sort of emissions they could run it and to me that was an incredibly impressive bit of work.

“What it told us was no we didn’t need to change the engine. It told us that we couldn’t be quite as aggressive with the settings on the engines as we might otherwise have been but it was a fabulous bit of engineering.”

It set up a showdown that has lived long in the memory.

“After Trulli pitted we knew we were in trouble”

With Renault running on limited power, it was Kimi Räikkönen who took pole in the mercurial McLaren-Mercedes MP4-20, Alonso qualified second-fastest but 0.5sec down. Schumacher was stuck in 14th after a mistake on his second qualifying lap (aggregate qualifying ran over two days in ’05), which left him mired down the order versus his rivals.

The Finn led from pole and held off the Renault into the Tamburello chicane and was looking comfortable in the lead for the first half-dozen laps. Unfortunately for him, the McLaren’s fragility reared its head and things fell apart after looking rocketship fast, a broken driveshaft the culprit. It put him out and left Alonso to assume the lead of the race.

Thanks to a Trulli train, Alonso was able to scamper up the road and into a decent lead over the pit stop phase, whereas Schumacher had stalled out in his comeback in the queue behind Jarno’s Toyota.

Thankfully for the seven-time champion, Trulli was soon in for his pit stop and it left Schumacher with clear road ahead to start lapping at qualifying pace as he attempted to fight his way back into contention. 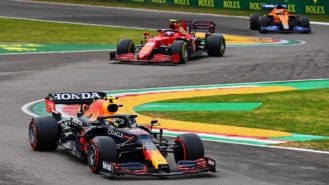 Following his final stop on lap 50, Schumacher unleashed all of his pace and set about closing in on the leaders having emerged in third. He made light work of Jenson Button’s BAR Honda and it didn’t take the German long to start eating into the gap to first at a remarkable rate.

It took just 13 laps to close down the 20sec advantage race leader Alonso had as a cushion. The worry along the Renault pit wall was obvious, not least for tactician Symonds.

“We were sort of breathing a little bit easier when he [Schumacher] was stuck behind Trulli. But after Trulli pitted we knew we were in trouble.”

It was at this point that a relative sleeper began to morph into a classic as the Ferrari clawed its way up to the back of the Renault at such a rate a pass looked inevitable. But many hadn’t counted on the wily Spaniard announcing himself as a major force in the sport with some brilliant driving himself.

A game of high-stakes poker at 100mph+ then unfolded over the course of 12 laps as the chasing Schumacher piled on pressure attempting to find a weakness in Alonso’s armour. The Renault man was not having any of it, reading the bluffs from the Ferrari’s positioning expertly before placing his R25 exactly where it needed to be at every moment.

The consistency and relentlessness of Schumacher were matched by the tenacity and completeness of Alonso’s resistance, something that was a key part of his toolbox that would become more apparent as his career unfolded.

“Fernando is an exceptionally difficult driver to pass,” Symonds continued. “If you’re in the lead and you want to keep someone behind you, you drive in an unpredictable manner. That was something I actually learned from Fernando, who’s the master of it. 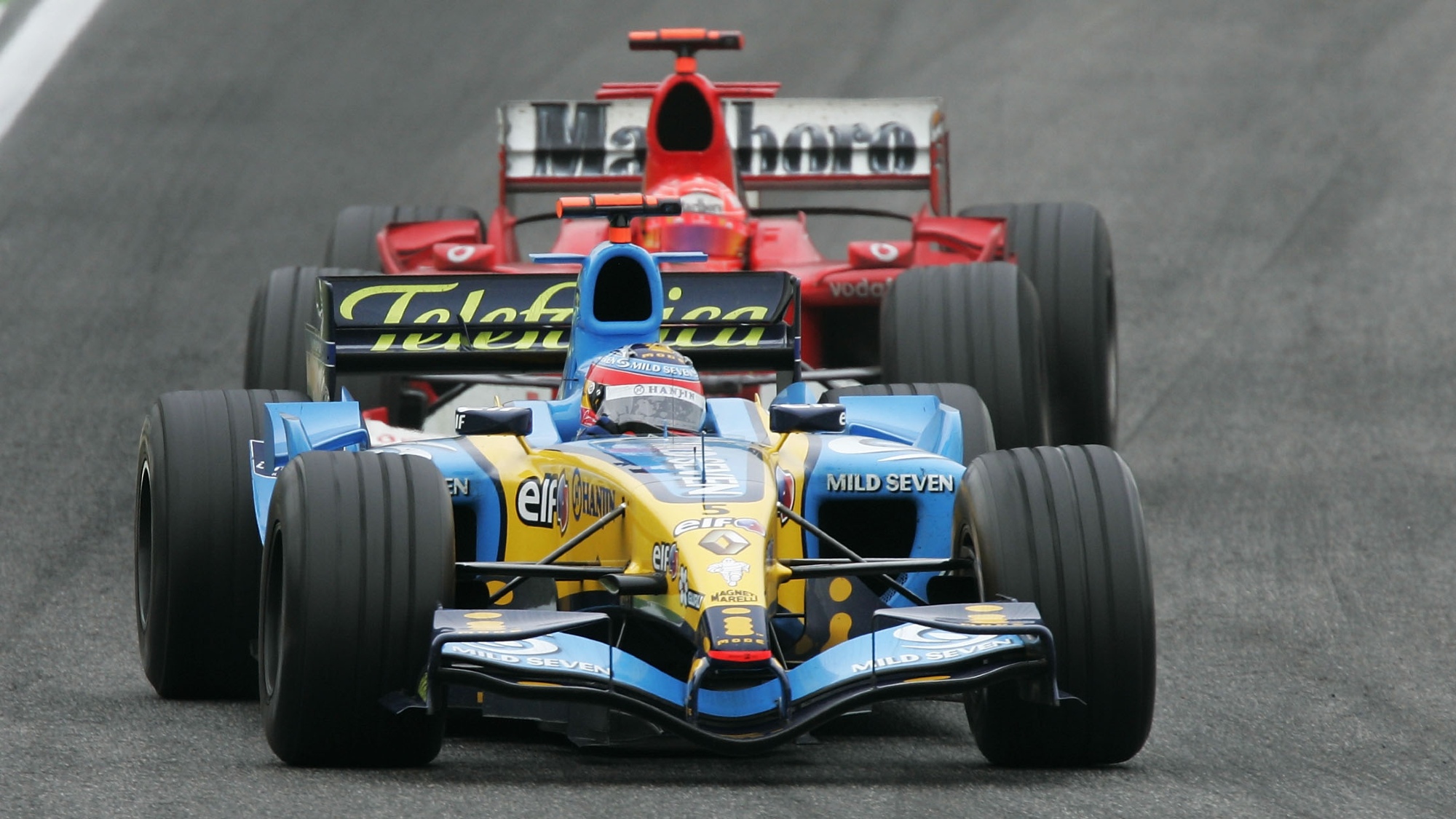 “Every corner he just did a little bit differently. So Michael might have been right on his tail but he was never quite sure exactly what he [Alonso] was going to do.”

And so in the final stage of the San Marino Grand Prix, F1’s most successful driver and best of his generation went toe-to-toe with the up-and-coming talent of the next one. It wasn’t quite a changing-of-the-guard moment but Alonso’s performance suggested he might have an even higher talent ceiling than many had thought when he took his maiden F1 win in 2003.

As Schumacher jinked to the left heading into Aqua Minerale to draw the front of his car alongside Alonso’s, it looked as though the opportunity had finally presented itself. Alonso though calmly shut the door and left the seven-time champion to think up another plan of attack.

Nose to tail and lap after lap the duo put on a show as Schumacher weaved and willed his rival into a mistake that was never forthcoming. An ambitious dive into the Tosa hairpin in the final laps a risky throw of the dice but Alonso batted him away once again, pinching the Ferrari to the apex and getting the better traction off the corner and up the hill to Piratella.

Alonso’s presence of mind even extended into taking cars not involved in the lead battle into consideration. In a recent interview with F1 about the race, the Spaniard admitted he was thinking several moves ahead when it came to backmarkers, slowing his pace as to not allow Schumacher the opportunity of an overtake that lapping a backmarker might have allowed.

“I thought it was a chance for Michael if I was too close to the car in front and losing some downforce,” Alonso said. “I was backing off in some of the corners that I knew he could not pass me like the last two, and tried to open up the space again with the cars in front. So we kept the two-seconds [gap] with [Mark] Webber.” 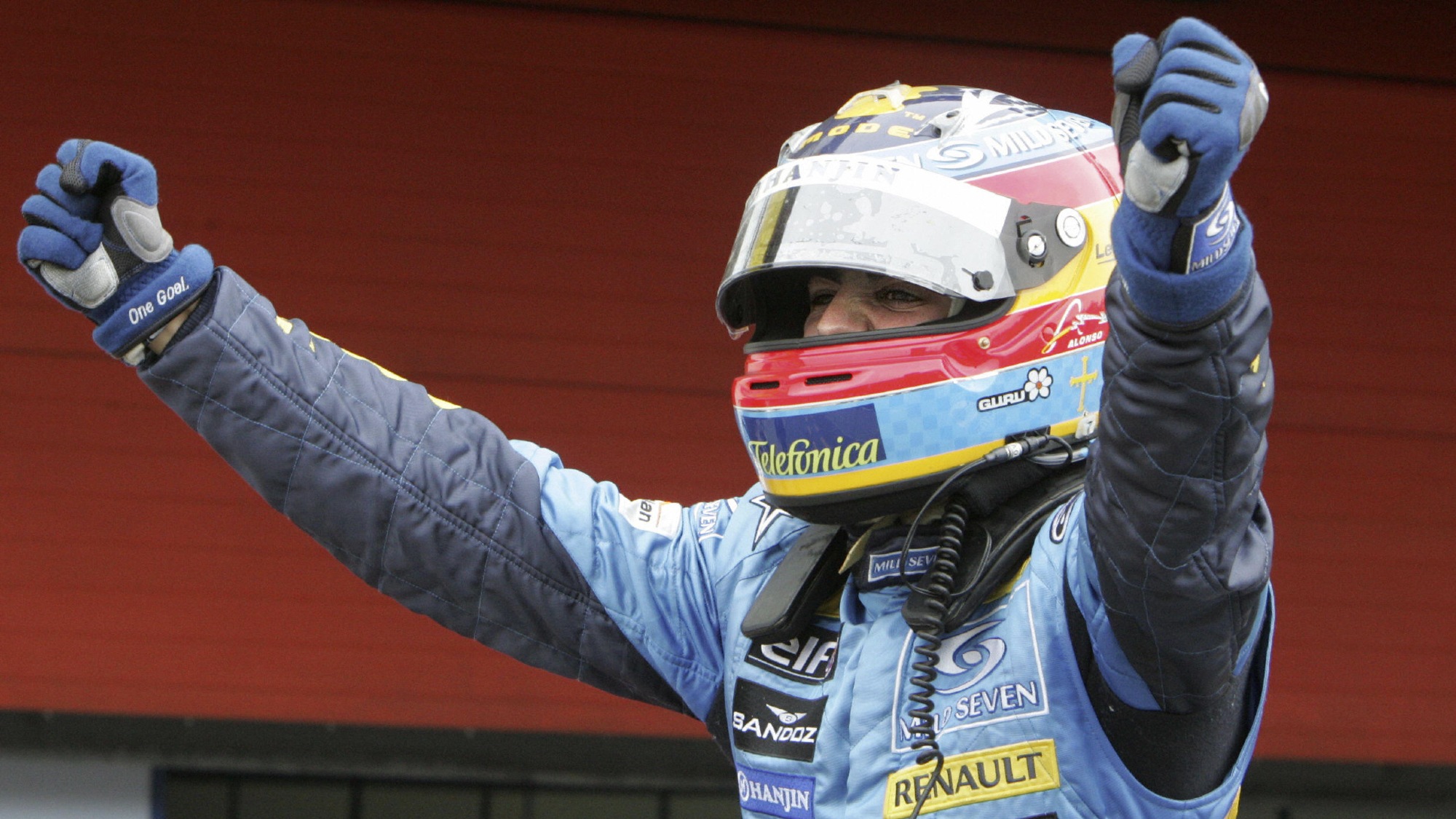 Alonso celebrates his third win of the ’05 season

It went right up to the final lap and the last corners of the 62-lap race but Alonso held on to his lead and crossed the line for his third win of the season just 0.215sec ahead of the reigning world champion.

Alonso added he felt comfortable in the car despite the immense amount of pressure but felt that Schumacher would not be capable of pulling off a pass around the Imola circuit.

It is still looked back on with fondness and pointed to as one of the modern classics between two titans of F1 and Symonds says the Renault victory made the race more memorable than if Schumacher had made the pass.

“Sometimes the overtake is a bit of a letdown because you’ve had this close race and the overtake ends it if you like. So I think that what makes it stand out was that it was a close race.

“Those last few laps had everyone on the edge of their seat, will he get past, what’s gonna happen? It’s great. Couple that with the fact you’ve got what certainly at the time were the two best drivers in the world and that makes for a pretty good race.

“One of the things that makes Formula 1 not quite so enjoyable for some of us is we know too much about it. Some fans watching that race will absolutely not have known whether Michael was going to get past Fernando, and that makes it really exciting.”