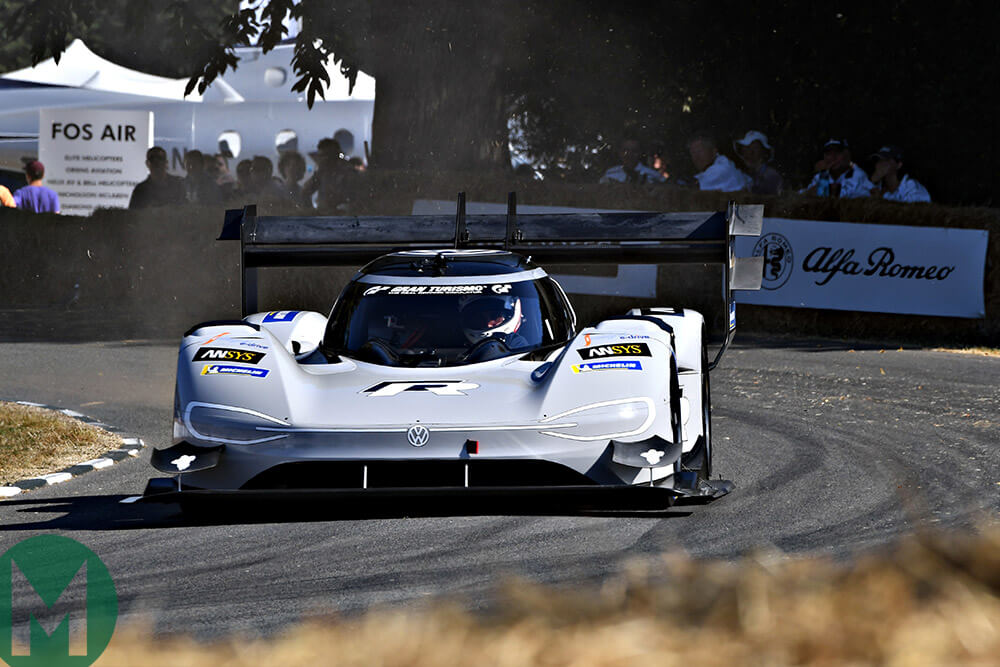 Romain Dumas added another hillclimb record to his growing collection at the weekend, ascending the 2018 Goodwood Festival of Speed hill in the Pikes Peak-winning Volkswagen I.D. R in just 43.86sec to set a new electric record. Not only that, the Frenchman’s was the fastest time of the event, and the third-fastest in history – and became the first electric car to top the shootout.

Electric competition came from the NIO EP9 hypercar, driven by Peter Dumbreck to a time of 44.32sec. Combustion could only muster third place through Jörg Weidinger’s screaming BMW E36, powered by a Judd V8 engine that took him to the summit in 46.43sec.

Festival regular Mike Skinner in his Toyota Tundra NASCAR truck, lightened with carbon-fibre panels replacing its usual steel ones, took fourth with 48.25sec ahead of Billy Monger’s Carlin Formula 3 car. With a far smaller displacement at his disposal than the NASCAR truck, Monger still manged to set a time of 48.31sec.

Celebrating 60 years of the British Touring Car Championship, the dedicated shootout for current BTCC racers was won by Andrew Jordan, setting a time of 52.58sec in his BMW 125i M Sport.

The Roborace Robocar, despite it packing more than 500 horsepower in its four 135kW electric motors, was far more hesitant but no less impressive. With no driver on board, its was the first autonomous run up the hill.

The 1965 Ford Mustang, run by Siemens and Cranfield University, also attempted a driverless run, although its demonstration ended in the haybales. The Sunday Times reported that the autonomous Mustang sprang a number of unfortunate issues just before its run, but with just six weeks of programming it was a noble effort.

The festival also paid homage to numerous 70th birthdays, including that of Porsche, the Jaguar XK, and Land Rover.

Elsewhere on display around Goodwood was the very first 1948 Porsche 356, the Martini-liveried Porsche 911 Carrera RSR that competed in the 1974 Le Mans 24 Hours, the Rothmans Porsche 961 and the LMP2000 – a prototype that never raced at Le Mans, powered by a 3.5-litre V10 designed for Formula 1 competition in 1992.

Fresh from its record-breaking Nürburgring run, the Porsche 919 Evo took to the hill in a more sedate fashion, while the 2018 Le Mans GTE-Pro-winning Porsche 911 RSR ‘Pink Pig’ put on a wheel-spinning display.

Tributes to the XK included a parade of XK120s and the iconic cars that followed, including the Lister-Jaguar ‘Monzanapolis’ and the Ecurie Ecosse Tojeiro-Jaguar, which raced at Goodwood with Masten Gregory in 1959.

Seventy Land Rovers, including a recreation of the very first prototype and ‘HUE 166’, played their part in marking the manufacturer’s anniversary. All four generations of the seminal SUV were paraded up the hill.

Cosworth’s era of dominance also received the Goodwood treatment, with DFV-powered Formula 1 cars such as the Lotus 49B, championship-winning Matra MS80 driven by Sir Jackie Stewart, and the McLaren M23 driven by Emerson Fittipaldi and Gil de Ferran out in force.

Goodwood’s ability to mark, commemorate and celebrate the best of motor sport is unrivalled, and this year’s event was testament to the incredible scope of the Festival. Celebrating its own 25th anniversary, the Festival of Speed’s silver jubilee is just surely just the start.