Ferrari confident as Leclerc and Vettel lock out the front of the grid in qualifying for the 2019 Belgian Grand Prix, but will the team’s luck — and tyres — hold out? 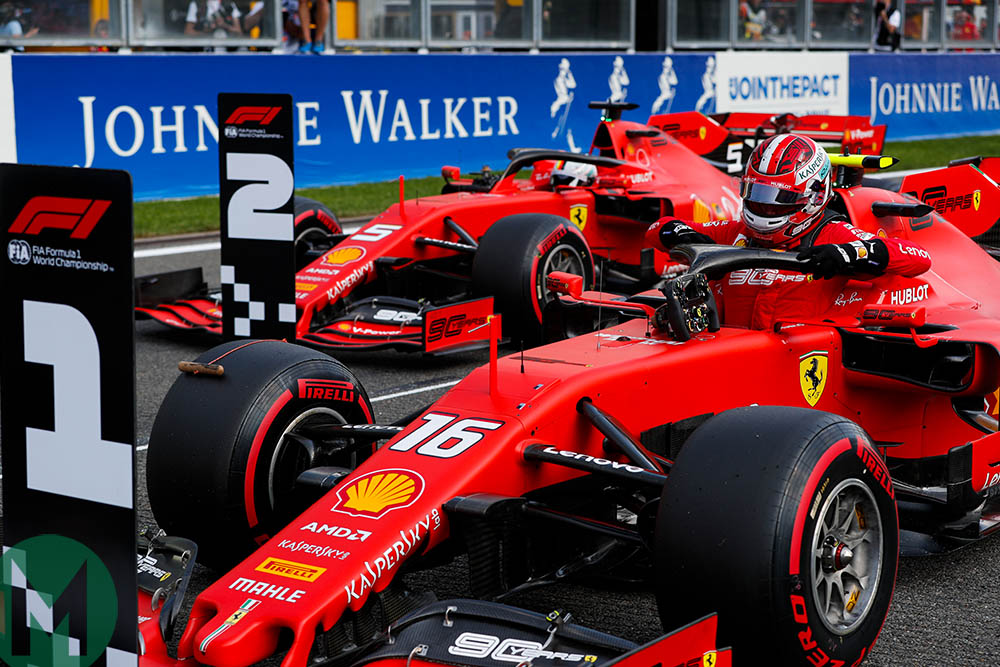 After close-runs in Bahrain and Austria, Leclerc heads into the Belgian GP with a strong chance of breaking his F1 duck, but it’s not a done deal.

It’s 12 months since Ferrari last won a Grand Prix, here at Spa, and that wasn’t something the media was letting the team forget. Vettel, though, was doing his best to let a bit of pressure out of the valve.

“Charles should have won in Bahrain and we did win on the road in Canada so, performance-wise, I don’t look at it as a year without winning. But if we get the chance this week, next week, or in Singapore, we need to maximise.”

Leclerc certainly did that, outqualifying his team-mate for the sixth consecutive race and topping every practice/qualifying session bar one.

In terms of the lap composition, the differences were as 2019 has led us to expect: the Ferraris blisteringly quick in sectors one and three where top speed is all, and the Mercedes pair fastest through the sinuous sector two.

And therein lies the potential race story. On Friday afternoon, Mercedes had quicker average race runs on the soft tyre and it could be that, for race pace, Mercedes and Red Bull will be a match for the red cars. Passing them though will be another matter.

Vettel has cautioned that the factors which saw Ferrari so far off the pace in Hungary could hurt them again in the race, and Ferrari team principal Mattia Binotto alluded to the scorching Budapest temperatures playing a role in that.

“On a single lap the external temperature is not as important as how you prepare the tyre,” Binotto said. “In Hungary we saw that we struggled in the heat and I’m happy with the (forecast) cooler temperatures tomorrow.”

Lewis Hamilton ahead of Sebastian Vettel during qualifying for the 2019 Belgian Grand Prix” src=”https://cdn.motorsportmagazine.com/wp-content/uploads/2019/08/05033455/lewis_hamilton_ahead_of_sebastian_vettel_during_belgian_grand_prix_qualifying.jpg” style=”width: 100%;” />

It was tyre preparation during qualifying, while drivers also tried to ensure that they had a tow, which led to probably the most extreme example we’ve seen yet of cars tripping over each other on warm-up laps while trying to keep out of the way of cars on a flying lap.

Leclerc (1min 42.519sec) did a superb job but the Mercedes pair might have been a bit closer had Hamilton (1min 42.282sec) not almost rammed the back of Bottas (1min 43.415sec) on the build-up to his first Q1 run and Valtteri himself not had to lock his fronts to avoid running into the back of Nico Hülkenberg’s Renault.

“You don’t want to trip over your own feet and end up looking like idiots but we did it twice today,” Toto Wolff said. “The power is just ridiculous with Ferrari at this type of track but I think there’s everything to play for tomorrow, although I think the cooler temperatures might help Ferrari.”

Max Verstappen always figured that it would be a tall order to compete with Ferrari for pole at Spa but he was still a little frustrated at engine issues that prevented him from getting closer to Bottas’ Mercedes than 0.28sec as the first Red Bull qualified fifth.

“The lap was pretty okay,” Verstappen explained, “but the whole weekend we’ve had engine power issues with the settings we wanted to use in qualifying, so we’ve had to run conservatively. Without that I think I’d have had a decent chance of fighting with the Mercs and there’s still a decent chance we could get a podium.”

Despite Christian Horner proclaiming on TV early in the Hungarian weekend that Pierre Gasly’s Red Bull seat was safe for the rest of the season, Alex Albon had been somewhat taken aback when he reported for a scheduled catch-up meeting in Red Bull advisor Helmut Marko’s office the day after the race – the first Monday of the summer break. 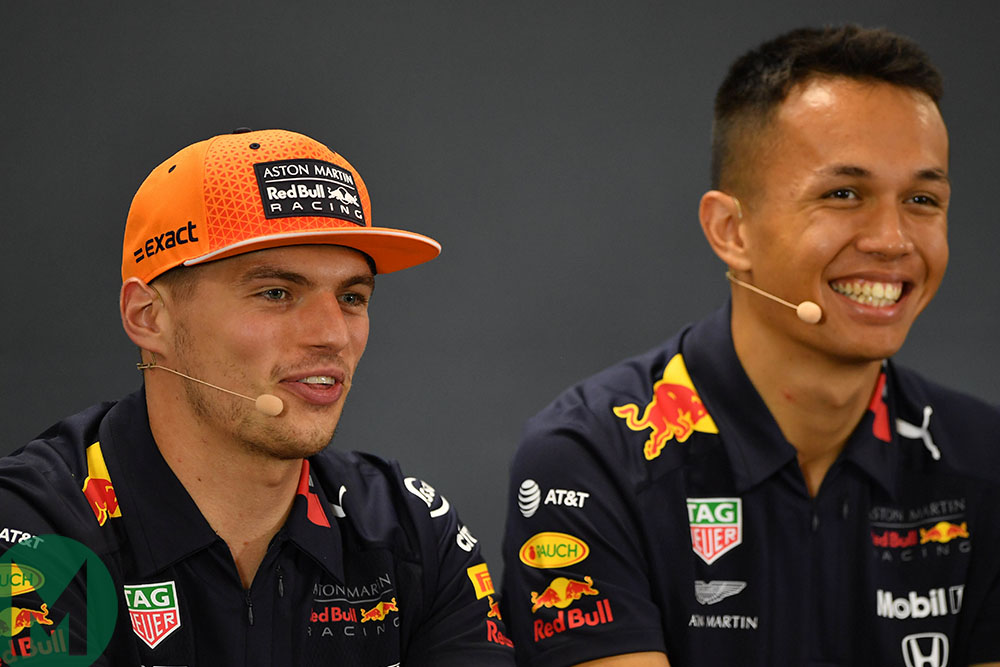 A new outfit — and an intimidating team-mate — for Albon Photo: Motorsport Images

So, with that, Albon was cast into the pressure cooker environment of being measured against Verstappen every other weekend. But, for a man whose F1 hopes appeared to be dead just a year ago, the concept of being one of the precious few racing drivers who ever get their backsides into a race-winning F1 car, transformed a ‘relaxed’ summer break into one of lengthy contemplation over a surreal opportunity.

Although Albon did a fine job to finish FP1 just 0.08sec down on Verstappen, he actually had some of the senior team debut pressure removed by a decision to put a new Spec 4 Honda into the back of his car, meaning a back of the grid start. A chance for him to repeat his Toro Rosso Chinese GP feat of driving from the back into the points. Or, who knows, in a Red Bull, even into the top six!

Daniel Ricciardo qualified the first Renault an excellent sixth, almost three-tenths quicker than team-mate Nico Hülkenberg. It put you in mind of Canada, a similar low-drag place, where his fourth on the grid was just a tenth shy of Leclerc and one of the season’s stand-out laps.

While Ricciardo was happy with the car from the outset, Hülkenberg struggled throughout practice with an imbalance he couldn’t dial out, not something you want for a Spa race in which the relatively abrasive asphalt can punish the rubber on an unbalanced chassis.

Hülkenberg is also having to cope with fall-out from the not-unexpected news that Esteban Ocon has been signed for 2020 and that he must look elsewhere.

“There was a change of dynamic the week after Hungary and I knew there might be a change ahead. We’ve had a difficult year, so that contributes to the wish for change. Drivers have different aims at different stages of the career, and different values, and then there was the nationality thing – there were lots of factors. I was disappointed but I accepted it. Whether I agreed with it is a different matter…”

All things considered, seventh on the grid is a decent showing and Hülkenberg’s aim is to keep his team-mate honest and try to elevate Renault above its current sixth place in the championship, at the same time as trying to secure himself a Haas drive, alongside Kevin Magnussen next year.

And what of the “suck my balls” episode in Hungary last year?

“Probably blown up a bit by the media,” he smiled. “Kevin’s not a deal-breaker for me.” 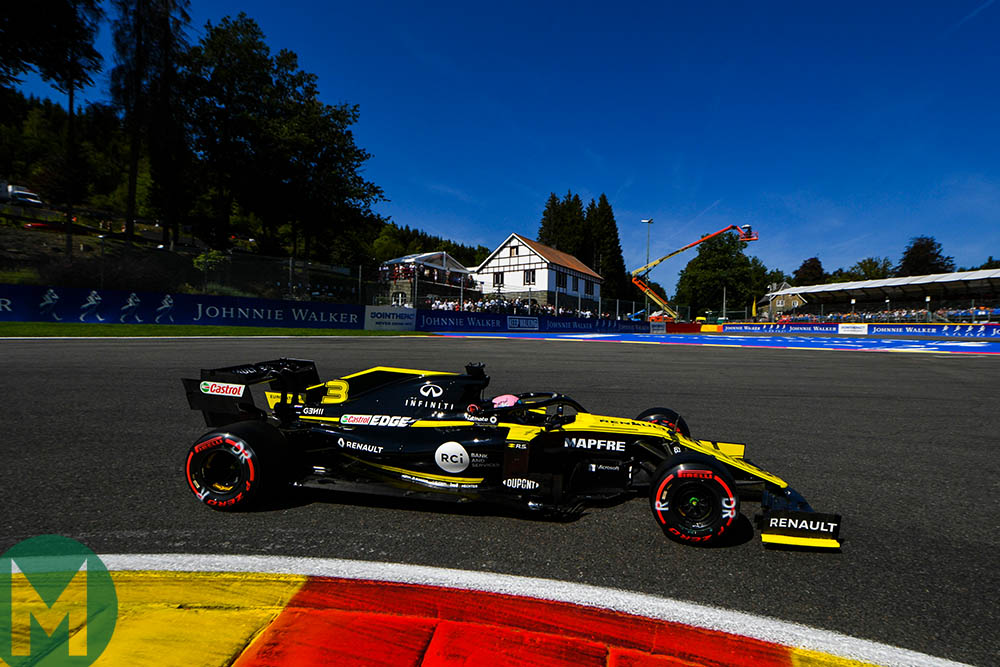 Oh, and sorry, I need to mention, we’re at that daft stage of the season where almost as many cars have grid penalties as those that don’t as engine and ancillary components exceed their quotas. It’s all a bit of a nonsense and the sooner someone comes up with a better idea – such as deducting constructors’ points – the better. Both Renaults therefore go back five places…

Kimi Räikkönen knows his way around Spa. He’s won four times and gave Ferrari its last pole position in the Belgian Ardennes some 12 years ago. He came in with a pulled leg muscle, which saw Marcus Ericsson put on stand-by rather than racing an Indycar in Portland. Once in the car though, Raikkonen was ok and his own skill allied to Ferrari power added up to eighth on the grid, with Sergio Perez and Kevin Magnussen completing the top 10.

Racing Point has a substantially upgraded car in Belgium and the Mexican noticed the difference immediately. It wasn’t all roses though, with his new Mercedes engine letting go on Friday afternoon after an oil pressure drop. An older unit was fitted for Saturday however, and hence no penalty. But the improved performance and a new three-year Racing Point contract outweighed all that.

The Haas picture was simplified at Spa because the low downforce package is incompatible with the old Melbourne chassis that Grosjean has reverted to in recent races, and so both the French-Swiss and Magnussen raced the latest Hockenheim-update car. Predictably, Magnussen couldn’t make the tyres work on Friday but did manage to get a lap out of it that was good enough for the top 10 on Saturday, with Grosjean 0.06sec slower in FP2, and thus 11th with freedom of tyre choice, which might be the better deal.

McLaren struggled more at Spa than of late although Lando Norris starts 12th. Carlos Sainz bowed out in Q1 through no fault of his own. Trying to save a set of softs to hopefully use in Q3, he did his first Q1 run on a set of used rubber. The Law of Sod then dictated that his later new tyre run was wiped out by a red flag for a stranded Alfa after Antonio Giovinazzi’s engine let go. Both the Italian and the Spaniard also have engine penalties. 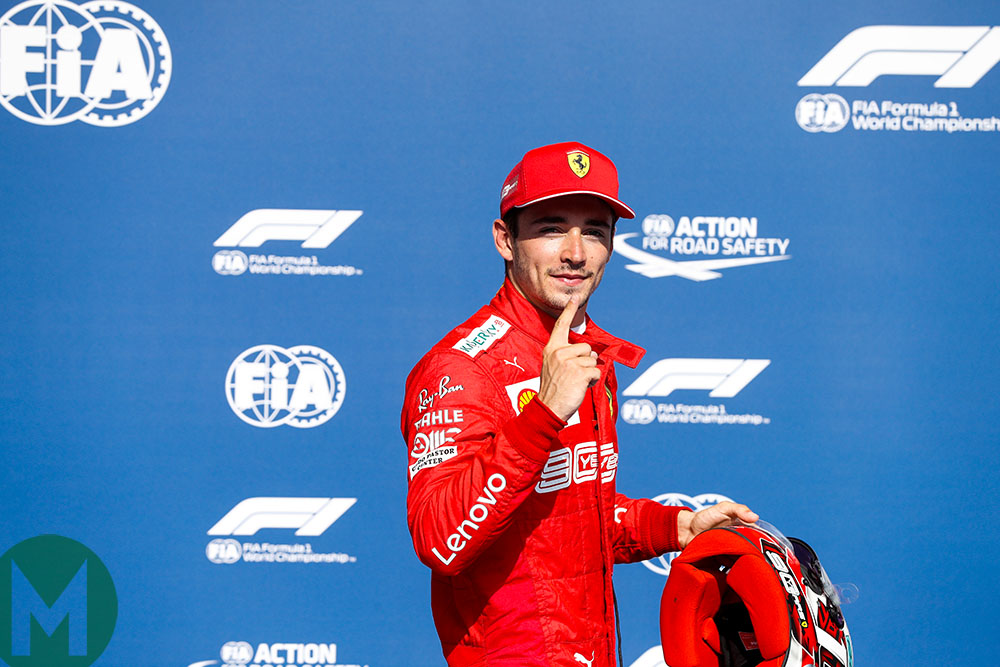 So, can Ferrari and Leclerc specifically, finally get the job done in 2019? I’d say yes, but without overwhelming confidence.

Mattia Binotto himself did not seem entirely convinced either when he said, “Charles had great one-lap pace and Seb has good race pace and needs to focus on his strengths, but let’s enjoy today…”

It’s with great regret that Motor Sport also has to report that, following the F1 qualifying session, Anthoine Hubert, the 22-year-old reigning GP3 champion and Arden F2 driver, succumbed to his injuries after an appalling second-lap accident at Raidillon. American Juan-Manuel Correa is in a stable condition at the CHU Liege hospital.