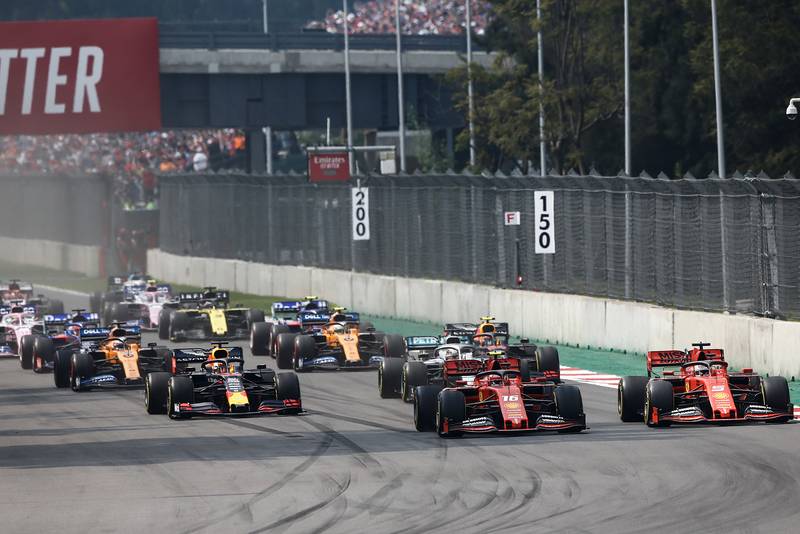 Lewis Hamilton won the Mexican Grand Prix despite a first-lap clash with Max Verstappen, bringing him within four championship points of winning his sixth f1 title.

Mercedes’ tacticians once again made Ferrari look lacklustre, as their one-stop strategy landed Hamilton in the lead, while pole-sitter Leclerc sacrificed first position with a two-stop strategy that saw him finish fourth.

Hamilton’s victory hopes were heavily dented in the Turn One collision, which dropped him to fifth.

Verstappen initially fell to eighth, but his recovery attempts left him at the back of the pack, when he overtook Valtteri Bottas and caught his right rear tyre on the Mercedes’ front wing, causing a puncture.

At the front, Ferrari appeared to be in control until Charles Leclerc was brought in to the pits early, putting him on a two-stop strategy, and promoting Sebastian Vettel to the lead.

Mercedes then brought Hamilton in on lap 24, fitting hard tyres, which he would have to conserve for 48-laps to make his one-stop strategy work.

Ferrari didn’t follow suit, and Vettel stayed out; Hamilton immediately reduced the gap to the leader to less than a pitstop’s worth of time, ensuring that he would lead after the first round of stops.

The scene was set for Vettel, on fresher tyres, to chase down Hamilton, while the two-stopping Leclerc was expected to join the battle behind third-placed Bottas.

However, the fight never materialised; a problem with Leclerc’s second pitstop left him with too much ground to make up; Vettel was unable to overhaul Hamilton and Bottas remained third, earning just enough points to keep him in the title fight — mathematically at least.

Verstappen fought his way back to sixth, almost 50 seconds behind team-mate Alex Albon, who was also on a two-stop strategy.